Bringing Cruella's origin to the big screen took a team of talented and dedicated filmmakers who were as excited as we are to see this story told. 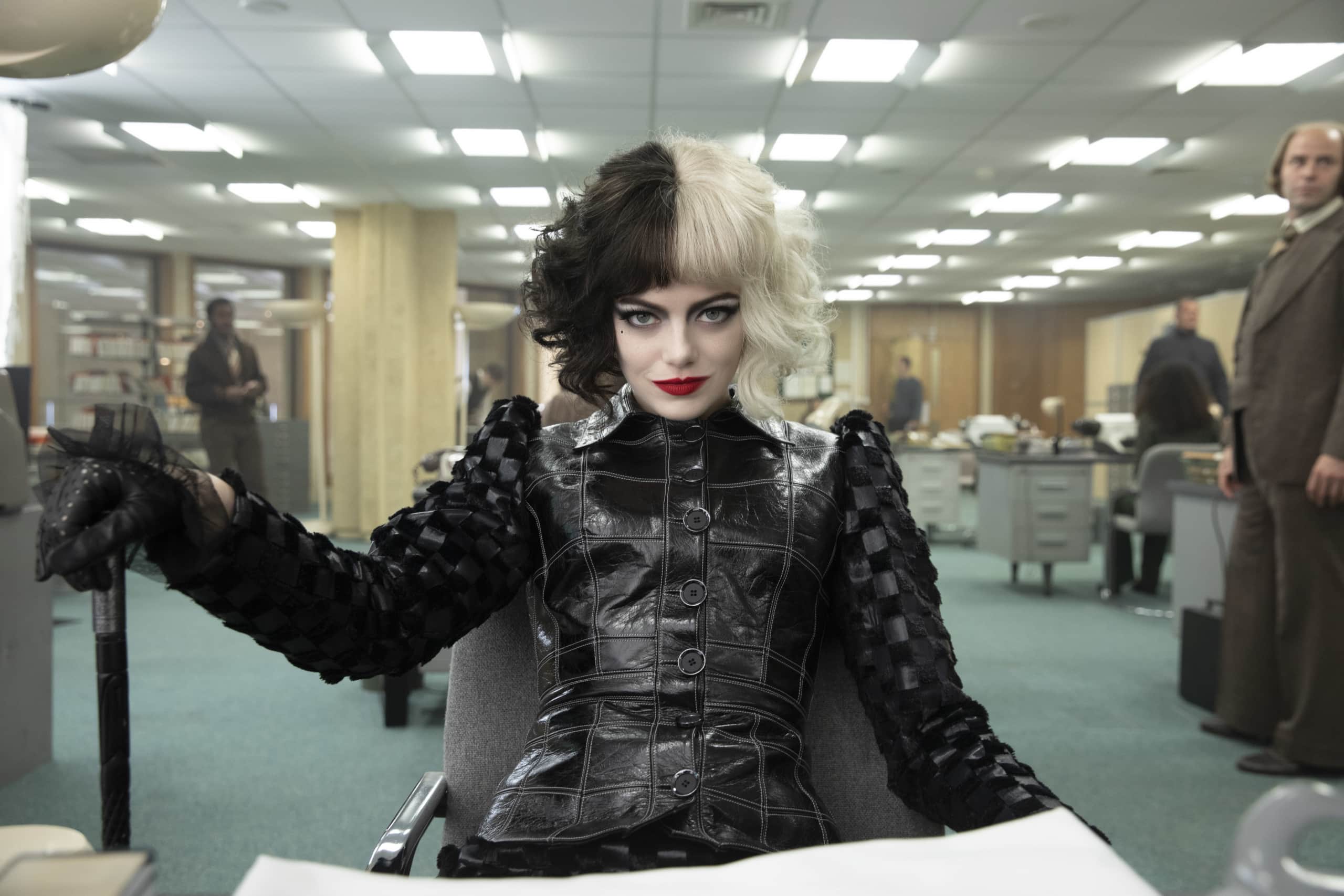 Cruella is a wickedly fun movie that you will want to see again and again. Emma Stone is delightfully mad as the eccentric Cruella while Emma Thompson absolutely embodies the villainy of the Baroness. That's all I can say for now, embargoes and all, but with this interview, I can take you behind the scenes of Cruella. Read on to learn what Director Craig Gillespie, costume designer Jenny Beavan, hair and makeup designer Nadia Stacey, and production designer Fiona Crombie had to say about bringing 1970s London and Cruella to life.

Behind the Scenes of Cruella: Interview With The Filmmakers

Craig, you have worked on other films in the past with villains and you have shared that you felt like they had another side of their story yet to be told. Is that what attracted you to Cruella? What was your goal for this iconic villain?

Craig: (Laughs) I mean, villains are always so fun to portray, because you just have more license to do things that aren't quite appropriate or push the boundaries, and create these larger-than-life characters. It was really important to me that this was not black and white. Obviously no pun intended there with Cruella. But I wanted there to be this gray area and be able to empathize with the choices that she was making. And I wanted to do it in a way that was really fun.

The costumes in Cruella are stunning. Jenny, you grew up in London during the time the film is set. What was it like being back in the 1970s?

Jenny: Yes, I'm afraid I'm very old. I'm looking around and it is really interesting how you kind of forget things. And then you do something like Cruella and it starts to all come back. But the best moment was that very first day outside Liberty's when I looked at the crowd and it was like,”Oh, I had one of those. Oh my god.” That's what we looked like. And actually, it was really fun.

Not only are the costumes amazing but the set pieces are equally beautiful and a feast for the eyes. Fiona, what did you find to be the biggest challenges in creating this world?

Fiona: I think the biggest challenge was actually the number sets. The film has great pace and we move around a lot. There's lots of little moments that require different sets. And so we were very busy. There were 120-odd sets to do across the course of the shoot. Some of them are enormous and some of them are tiny. I think one of the things that I'm most pleased about with the film is the level of detail in every single one of those sets.

Nadia: I think the biggest thing for me is that the hair and makeup in this is kinda used as a tool of deception. She's got to disguise herself from the baroness. And so when we first see Estella, it needs to be believable that she's a girl that's growing up in that time in London. And then she's creating this persona in Cruella. When she first starts arriving at these red carpet moments, there's a kind of mask-like quality in all the makeups as well. I needed the difference to be huge between the two looks. So I needed to keep Estella quite simple so that we had somewhere big to go for Cruella. 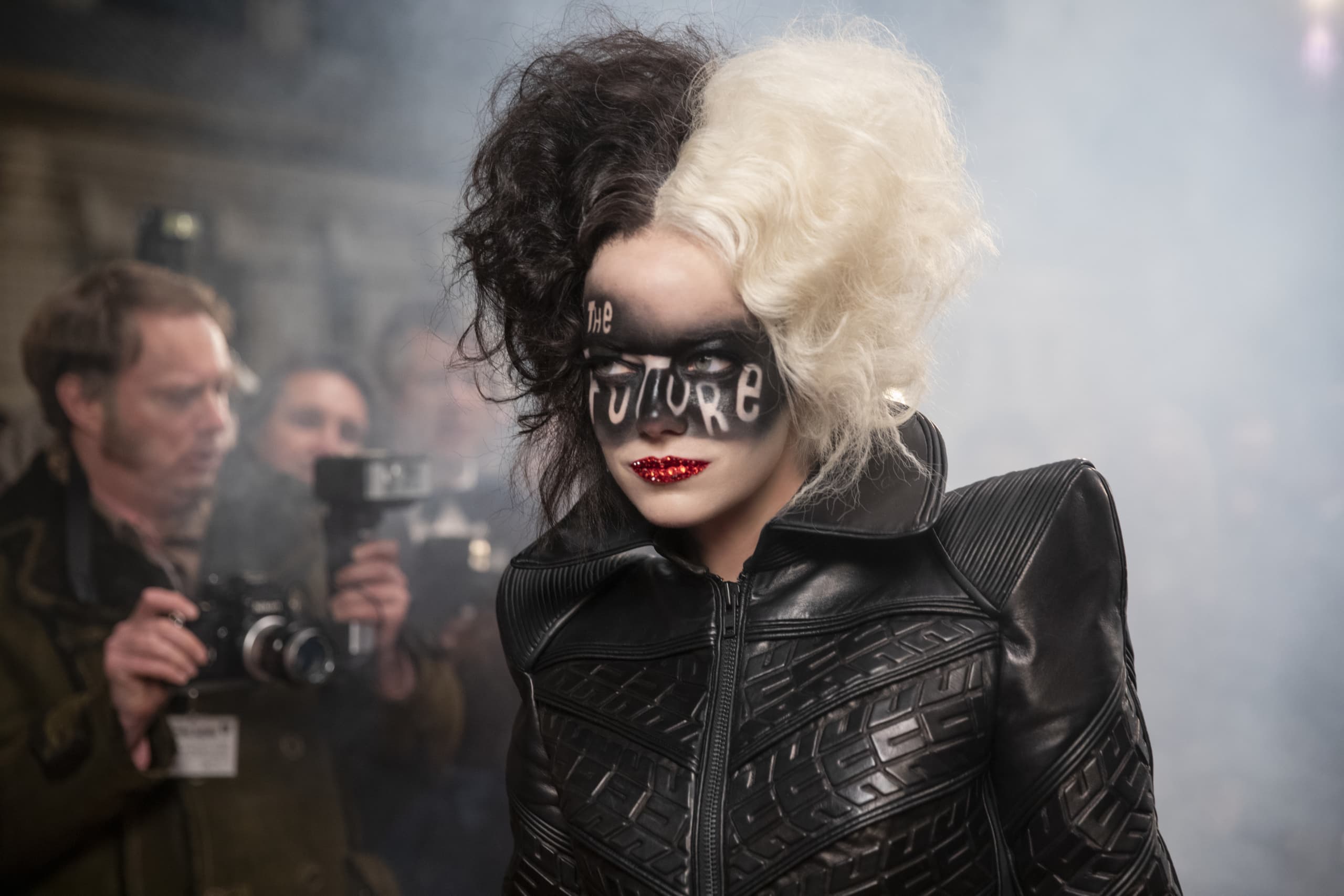 Two of the new characters in this universe are young Cruella played by Tipper Seifert-Cleveland and Artie (John McCrea). How did you go about casting these two and for Tipper, tying her performance with Emma Stone's?

Craig: It's pretty formidable to try and find Emma Stone's child version. Tipper really had that sort of spunk that we were looking for. That sort of defiance and conviction to her beliefs. I was thrilled with everything that Tipper brought to the party. We go through a very quick montage for three minutes in her school days, and you really get a sense of who this character is, from the look in her eyes and her defiance. She does it with humor, which is excellent.

(On Artie) There's a big Bowie influence going on. We wanted to cast a person that would be fluid and of the time. Not necessarily defined. He actually ended up bringing a lot more than was on the page to that (role). We even went back and shot an extra scene with him and Emma because he really brought so much to that character.

Cruella not only brings the fashion but an amazing soundtrack as well. There is a mix of music that people that are both familiar and unfamiliar with the time period will love. How did you go about picking out the music?

Craig: I actually designed the movie knowing we're going to have music, you have to design shots that give space for music. Very often on the set, I'll be putting in music as I go, as we're shooting (the scenes). That Doors track, when we first met the baroness, I threw on the day that we were shooting and it never changed. There's a great Nancy Sinatra song, which was kinda spontaneous when we were shooting. So there's always music in my mind as we're going through. 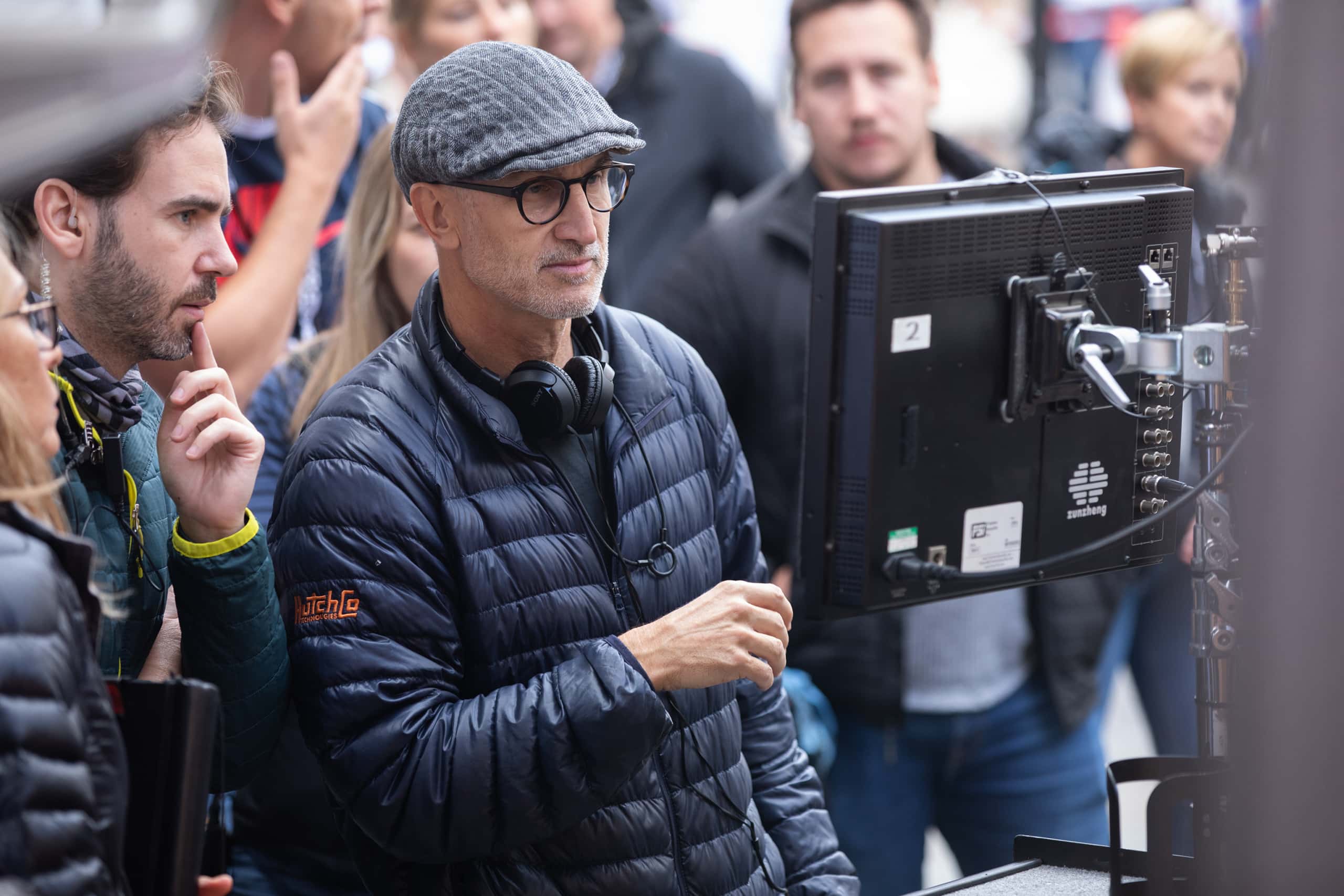 Let's talk wigs. How long did it take to style the wigs? Was it easier or about the same for young Estella?

Nadia: It was easier for young Estella because had a wig made for Tipper and that's the wig that we used. It's pretty much one style. It was much harder for Emma Stone because it was really busy at the time that we shot in terms of wig makers, and we couldn't get the white hair. It's really hard to get hold of. ‘Cause it has to be processed in a particular way. I only had two wigs for a long time. I could've made it easier with one or two styles. But once you start getting into it, and know that you've got the creative freedom to play with these looks, it was like, what can I do next? How can I change it?

One of the many incredible scenes in the film was the ball at the Baroness' home. It had everything from champagne glass towers to a cake. What was the biggest challenge in creating all these fabulous details?

Fiona: I think the biggest for the white ball was trying to have that cake not collapse.

Craig: That seems to undersell it a little, Fiona. The production value in those sets is insane. The flower work going up the stairs, it was so opulent. It was amazing.

Fiona: That for me was understanding the camera. I understood very early on the ambition with how the film was gonna be shot.  Which was very much 360. We were gonna see absolutely everything. So that meant we just needed to have every little piece of detail in place.

Jenny you have created iconic pieces in many films throughout the years. What was your inspiration or process like for creating Cruella de Vil's design?

Jenny: I think she comes out of the script, actually. We know where she ends up, about 15 years later as Glenn Close. In my mind, it had to be possible that this character could become that character. I think the inspirations were various because she's so diverse in all her different looks. I just looked at so much stuff and then out of it, pulled what appeared to be the narrative thread. I looked at Westwood and McQueen and Galliano, and sort of dug into my past. 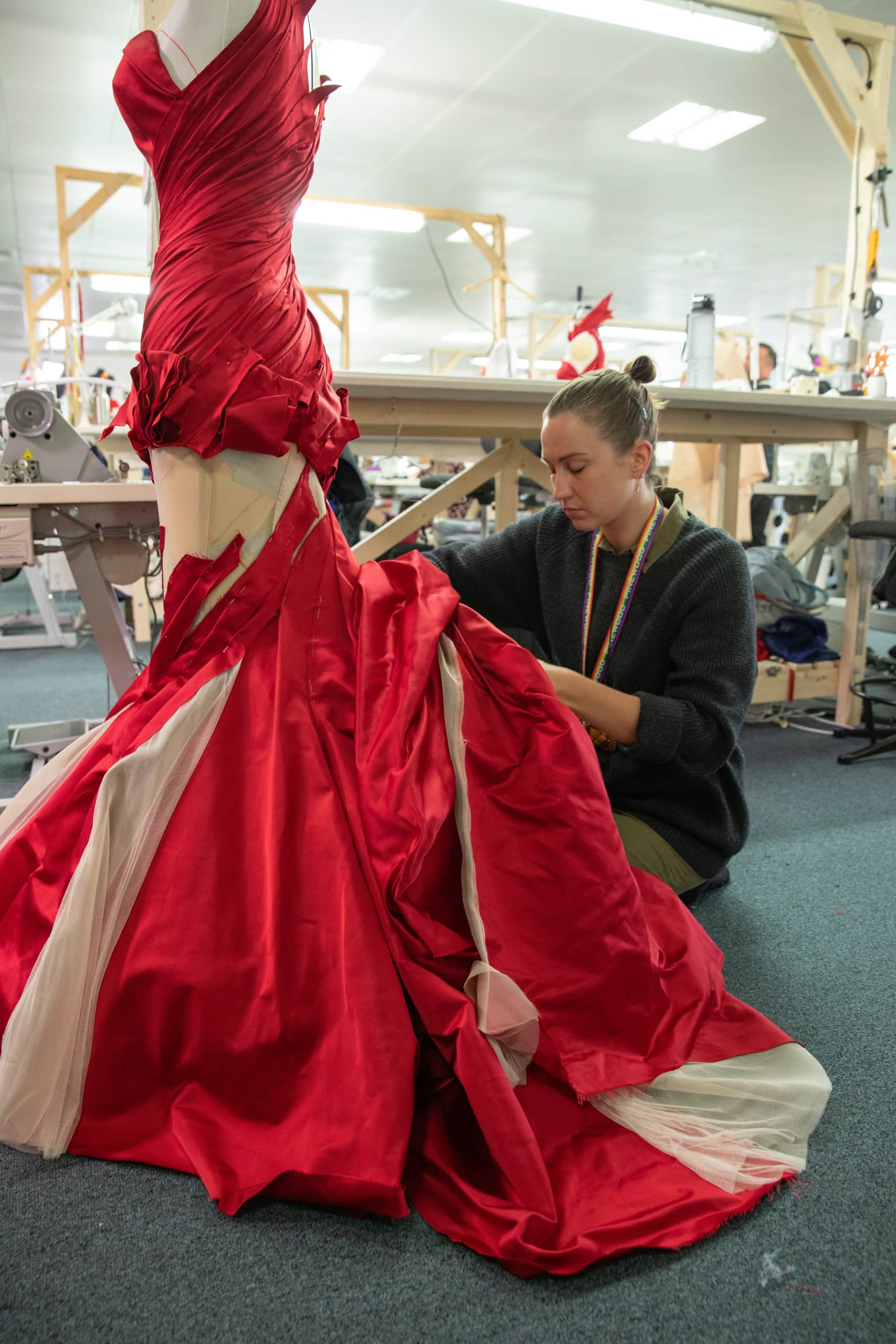 That garbage truck scene is one that keeps replaying in my mind. That dress was one of the most unique pieces I've ever seen in a film. Was that in the script or something you came up with along the way?

Craig: It was in the script. I had all those red carpet events, and I was trying to do something that was really dynamic. We came up with this idea of her turning up with a trash truck. It felt like a very appropriately aggressive thing for Cruella to do. And I was looking for ways to make it be visually impactful. We hung a 60-foot train on wires behind her on the back of a garbage truck and drove down a street in London. (laughs)

Jenny: Bang in the middle of Central London. It was marvelous.

We've talked a lot about Cruella but The Baroness has a unique look to her as well. What was the process for designing the style of this evil maven?

Jenny: The baroness is actually terribly clear once you get into that mindset of who she is and where her influences came from and her current situation. There was obviously a slight nod to Dior Balenciaga, all those great sort of '50s, '60s fashion designers.  She's a very good designer, she's just slightly past her sell by date. Her style is asymmetric and very fitted, very snobbish I think I'd call it.

Nadia: Naomi Donne came on as a hair and makeup artist for Emma. I'd started to give her my ideas, that I wanted this kind of very perfected sculpted look for her. I liked the idea that she's perfected her look and everything is kind of a variation on a theme. There's a kind of chaos to Cruella's look and then this completely clean, structured line to the baroness.

Finally, the chemistry between Paul Walter Hauser, Joel Fry, and Emma is perfect. Can you share a little about their casting process?

Craig: That was the heart of the film, this dynamic, they're our family, the three of them. And they all play very different roles. Paul, when he's doing his humor, you feel the human being underneath and where that humor might be coming from, or what it's deflecting, or what he's hiding. He gets to do all those layers with his humor. Joel is so accessible, and he was the heart of the show. He was the moral compass for Cruella, and he would call her out in a sort of a brotherly way. That dynamic between the three of them, I felt really worked beautifully. I'd give them room to improvise and they could play off of each other so well. They're all so talented that way. So it really made it feel effortless and natural to have them in the room together. 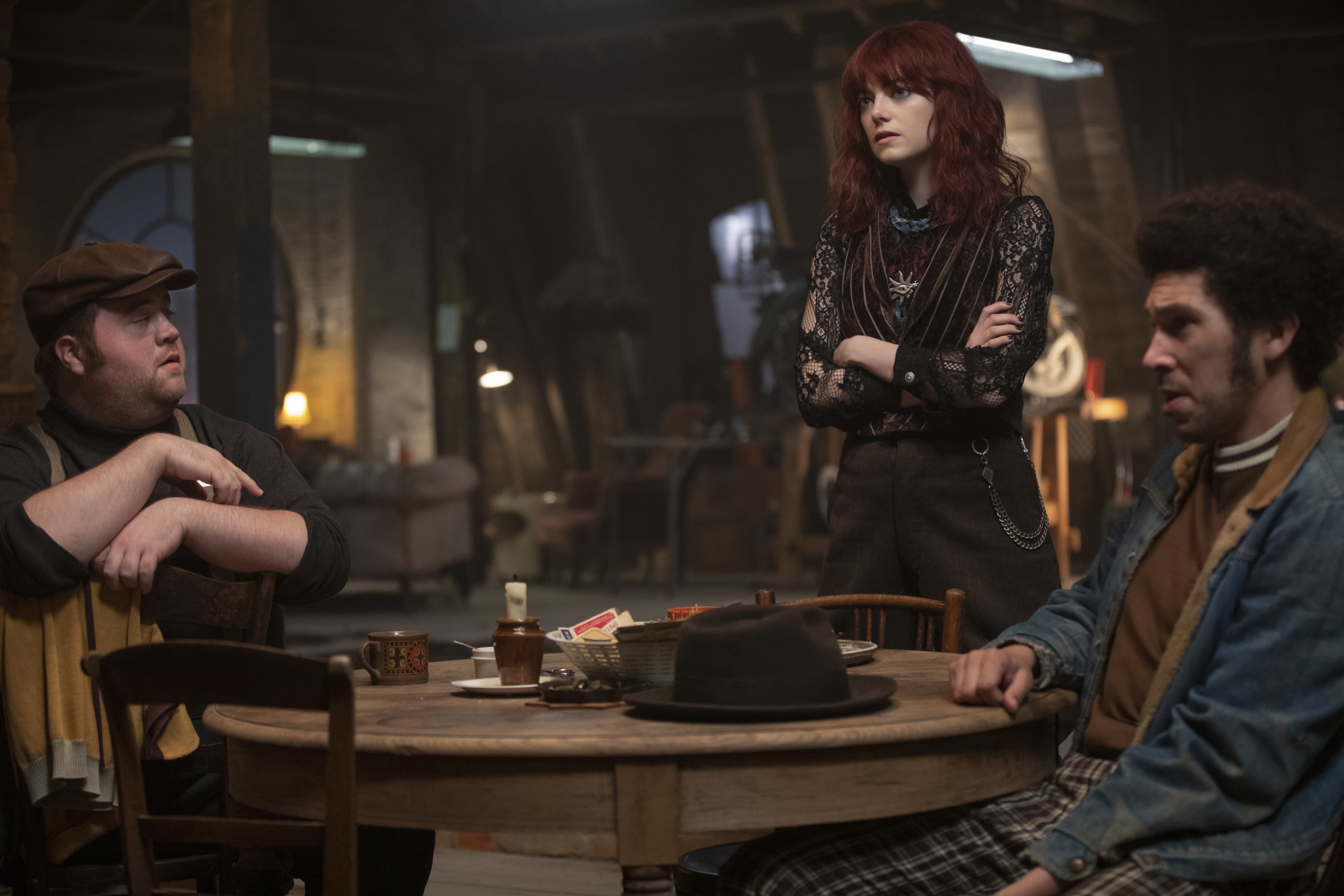 Previous Post: « Raya and the Last Dragon Giveaway!
Next Post: Fun Facts About The Rugrats From The Cast »