Our family screened Storks last month, the newest animated movie from Warner Bros. It was hilarious! Learn more about it with this Storks movie review! 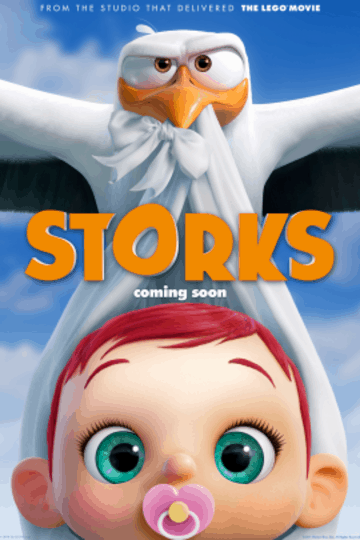 I will admit I had not even heard of the movie when we were asked to screen it. Since then though, I've seen the commercials everywhere so hopefully you know what I'm talking about! If you don't, or need a refresher here is the plot.

Storks deliver babies…or at least they used to. Now they deliver packages for global internet giant Cornerstore. Junior, the company’s top delivery stork, is about to be promoted when he accidentally activates the Baby Making Machine, producing an adorable and wholly unauthorized baby girl. Desperate to deliver this bundle of trouble before the boss gets wise, Junior and his friend Tulip, the only human on Stork Mountain, race to make their first-ever baby drop – in a wild and revealing journey that could make more than one family whole and restore the storks’ true mission in the world.

Before the screening I watched the trailer and thought this looks like it should be pretty funny. I was wrong, it was hilarious. We laughed throughout the whole movie. Andy Samberg is perfect as Junior, the about to be appointed successor of Hunter the insane, mean boss. He has a good heart and that gets him into a lot of trouble. Instead of “freeing” aka firing Tulip, he gives her a job to do. Unfortunately for Junior, that results in her using the Baby Making Machine to make a baby. They team up to deliver this baby and try to return everything to normal. But with Hunter and his goons, a wolf pack, and other hazards along the way, will they get the baby to her home safely?

The movie isn't just funny for kids. All parents who are well versed in the sleep-deprived baby stage, will love the parts where Tulip and Junior were suffering through new parentitis. Not to mention the fight scene with the penguins where everyone battles silently because you NEVER wake a sleeping baby!

I would recommend this movie for the whole family. It really is a wonderful story that shows you just why family is so special.