It was exciting sit down for an exclusive interview with Directors Joachim Ronning and Espen Sandberg! These guys took the helm for Pirates of the Caribbean: Dead Men Tell No Tales and brought a freshness to the franchise we all know and love. I feel they made this movie with the fans in mind. Making it something we will all want to watch again and again. 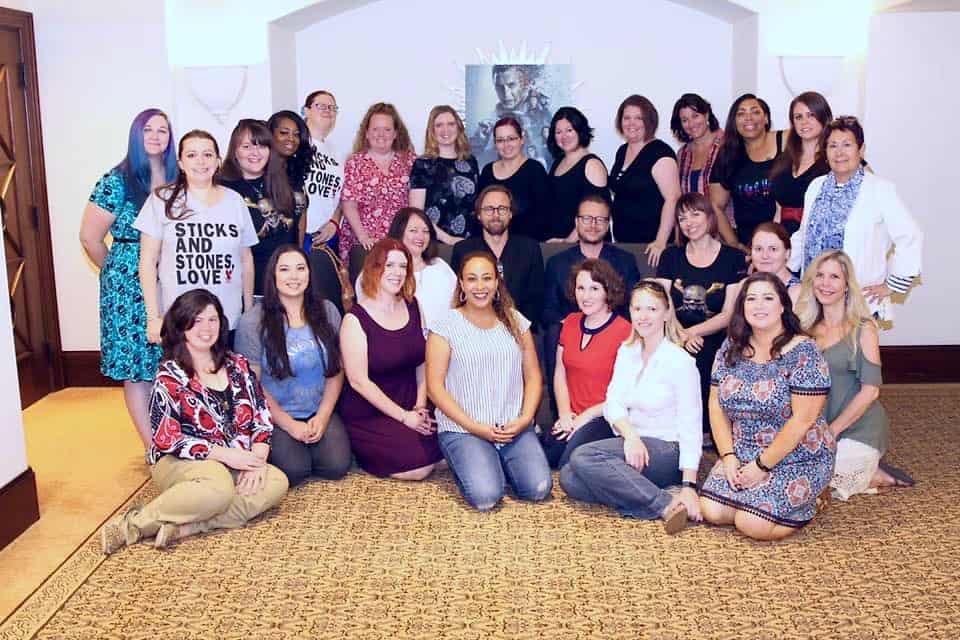 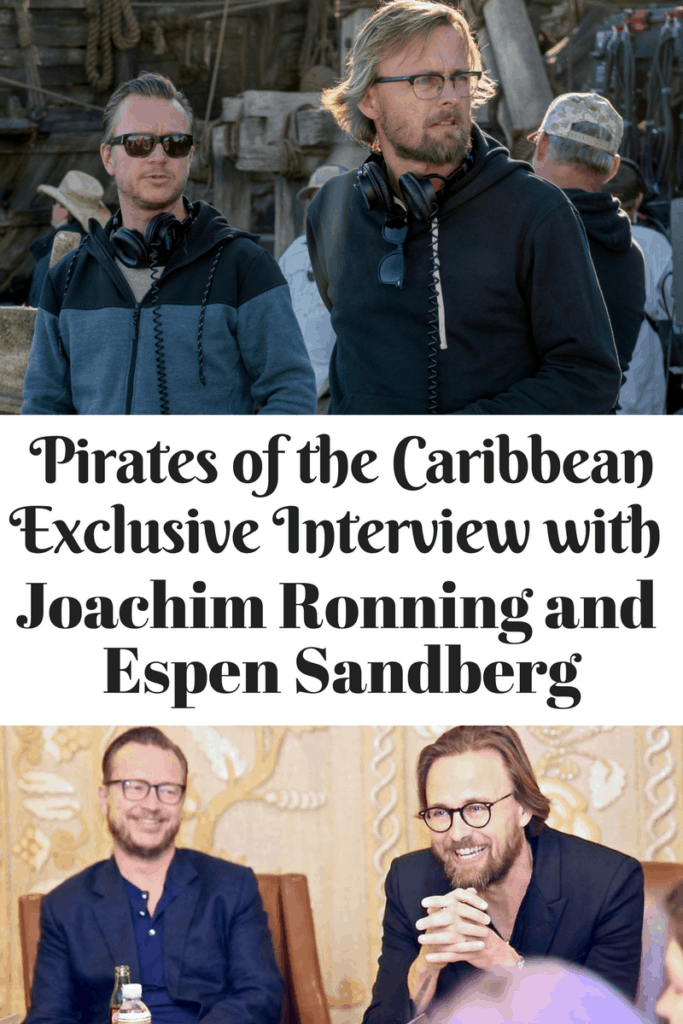 Joachim and Espen wanted this film from the moment they heard it was being developed. Pirates reminded them of the movies that inspired them to become filmmakers in the first place.

Espen: We chased it. We really wanted to make this movie. I think the basic reason is, Joachim and I started making movies together when we were 10. Movies that inspired us back then were the Spielberg, Lucas films, and this franchise just reminds us of that. It has that unique blend of spectacle, humor, scary parts, and also a lot of heart. 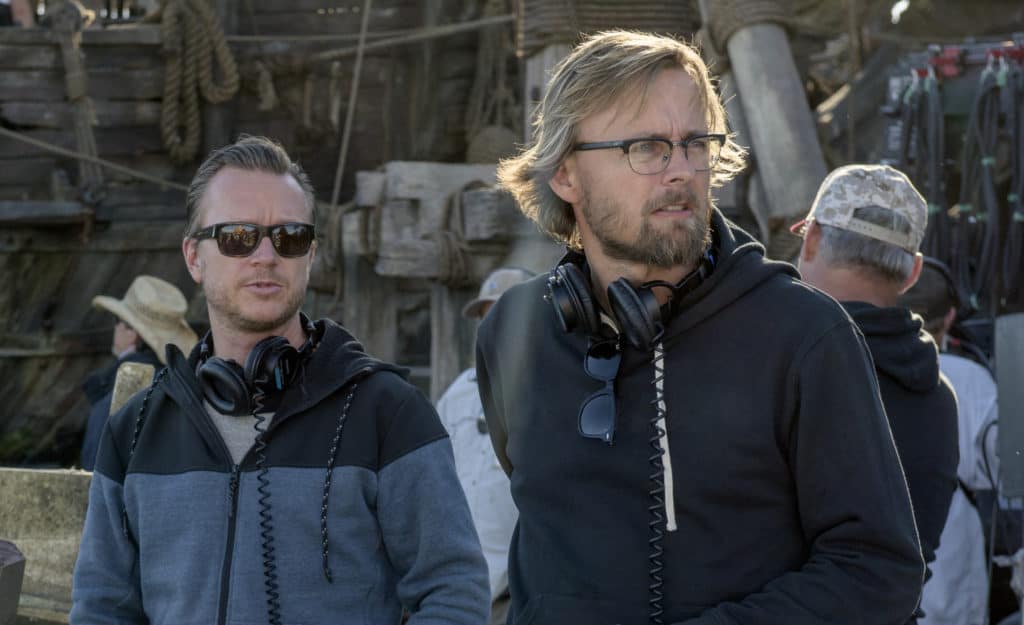 The effects for the ghosts are pretty amazing. Who thought up the sharks?

Joachim: It was in the script. Huge inspiration. (Laughter) The look of the ghosts is something we did together with Javier Bardem, production designers, and the VFX supervisors. Going in and trying to find what can give a ghostly appearance without losing the actors. 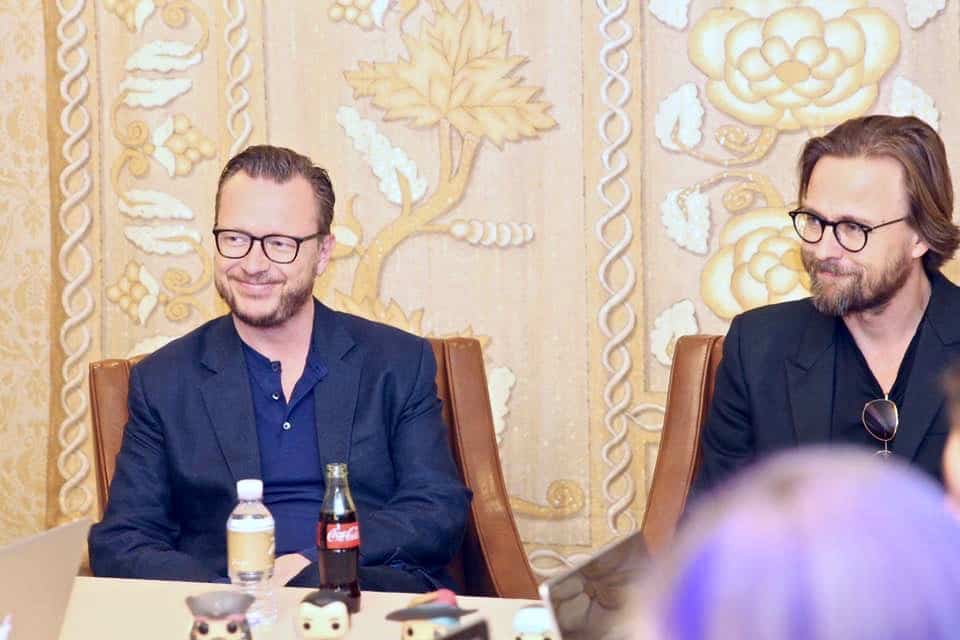 On working together as co-directors:

Joachim: We only work every other day. (Laughter)

Joachim: We don't really know another way of doing this. For us it's a very natural process, a collaborative one. We include the actors, the crew, everyone is a part of the discussion. We try to create a safe work environment, where every idea is welcome. That's important to us.

How did you guys meet?

Espen: Through dance. (Laughter) No really. We were breakdancers. (Laughter) 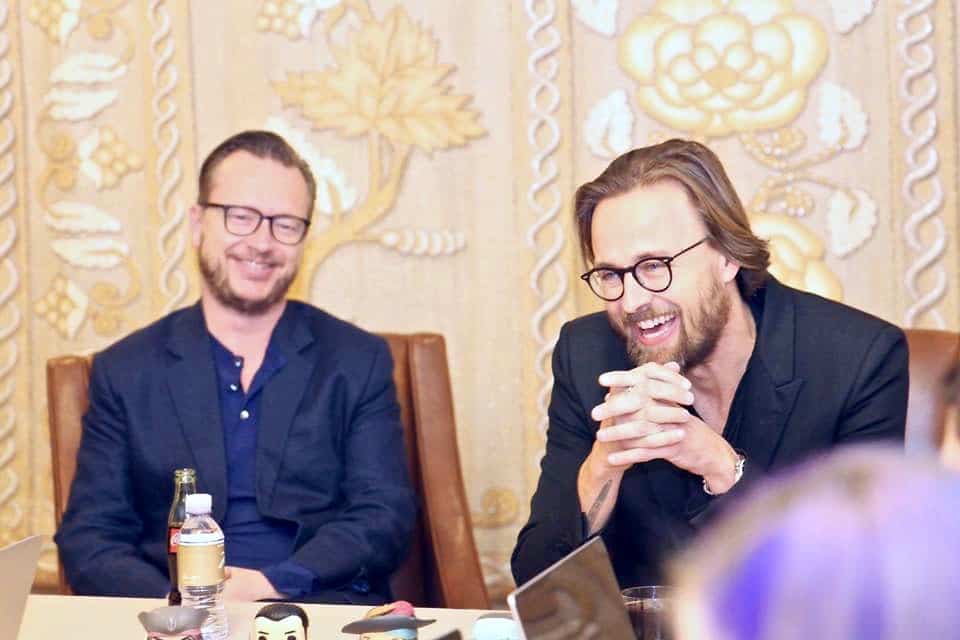 No they did not show us any of their dance moves. But maybe we can convince them if there is a Pirates 6. Just saying!

On the journey of making Pirates:

Joachim: This has been a very long journey for us. Almost four years we have been working on this movie. Which is long even for big movies. One of the things we had the most versions of, was Jack Sparrow's backstory. We had 10/15 versions of that and it was a long a grueling process. The mythology of Pirates of the Caribbean, it is a complex mythology. There are a lot of fans out there that know everything. (Laughter) It was important for us to be ahead of that and not mess with any previous backstories.

Espen: We also wanted to blend that backstory of Jack with Salazar's, so that their relationship and the revenge story became personal. 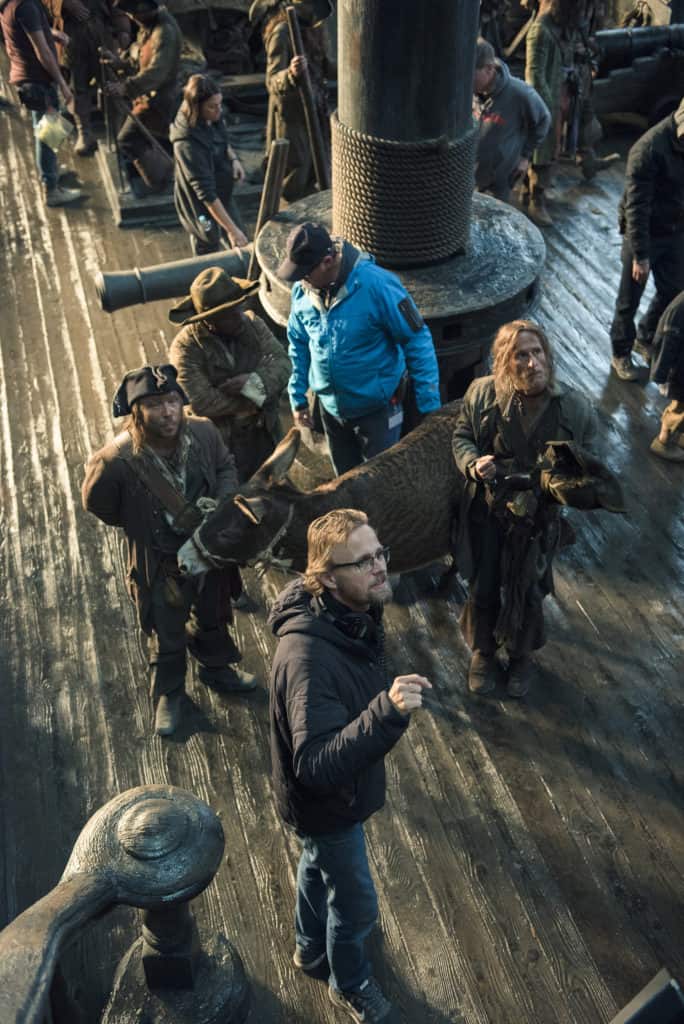 In Dead Men Tell No Tales, we see what Jack was like as a boy, but it was not the same process that was used for Princess Leia in Rogue One.

Joachim: The “youthification” that we call it. I've been misquoted in some newspapers saying “beautification”, it's “youthification” (Laughter). We shot it with Johnny, then spent the year in the computer.

Espen: Now he can do 21 Jump Street again. (Laughter)

Joachim: He was thrilled when he saw the results.

Espen: It's amazing. He's so funny. What you see with Jack Sparrow, it's all Johnny. He's a genius. For us he is up there with Chaplin because his timing is just perfect and he has such a weird imagination. He comes up with the craziest ideas.

The highlight was going into his trailer each morning and going through the scenes and the lines trying to come up with even more cool stuff to do to make it even more funny. Of course when we started shooting he would do something completely different. (Laughter) That makes it come alive. 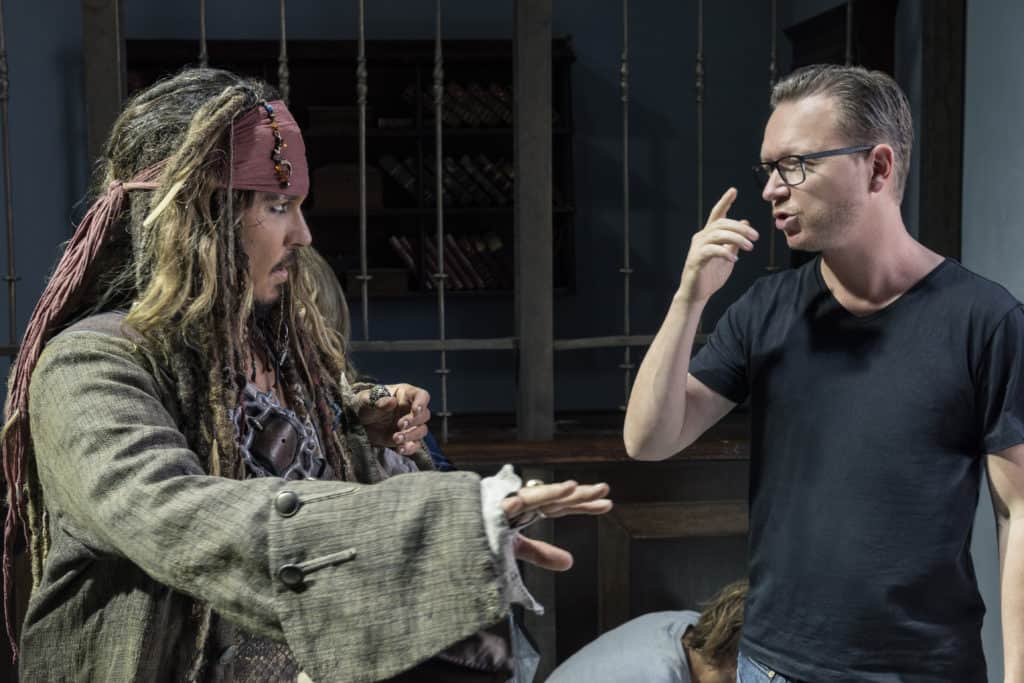 Not only are they brilliant, Academy nominated filmmakers, but they are also Pirates fans. I think that brought a new level of connectivity for the audience and inspiration for the film itself.

Joachim: The origin story in the movie came from us. That is something we wanted to explore. As fans of the franchise ourselves, we were curious about Jack Sparrow. Disney liked it, Bruckheimer, and Johnny liked it too.

He was a little bit more reserved because he is very protective of this character. He (Jack Sparrow) is a tricky movie character because he doesn't really have the character arc. He learns nothing (Laughter), he's not richer for the experience. (Laughter) He (Johnny) was very curious where we would go with it (the backstory). When we presented it, he really embraced it and that was cool. That was a big part of what we brought to get the job in the first place. 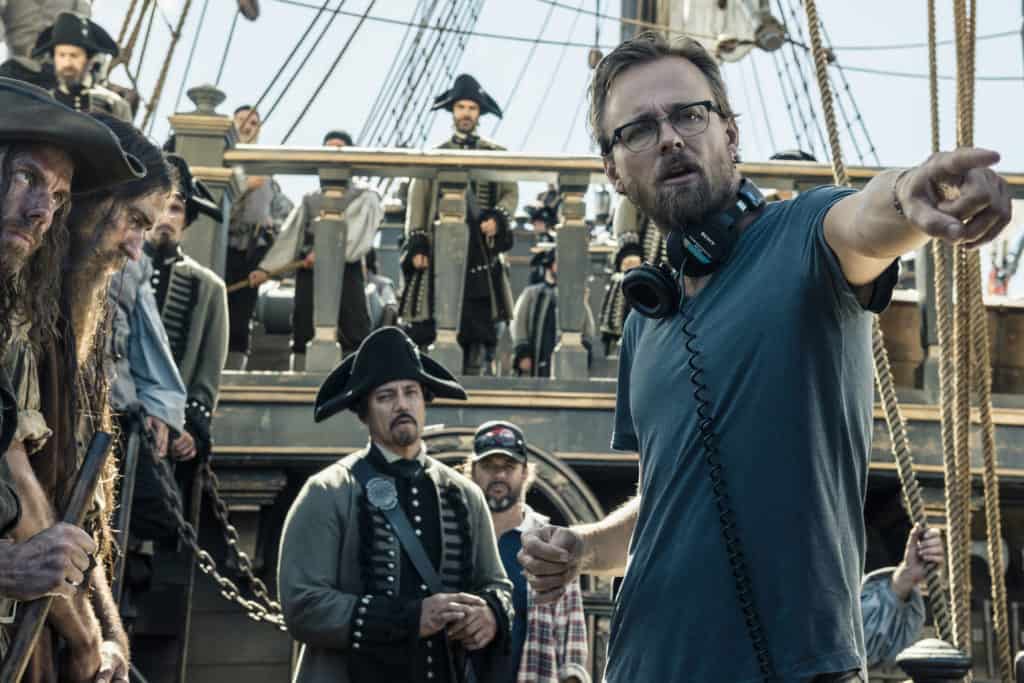 Will these Pirates fans be back if there is another film?

Joachim: I hope so! (Laughter)

Espen: We are fans of the franchise so we certainly hope that it continues. Crossing fingers. 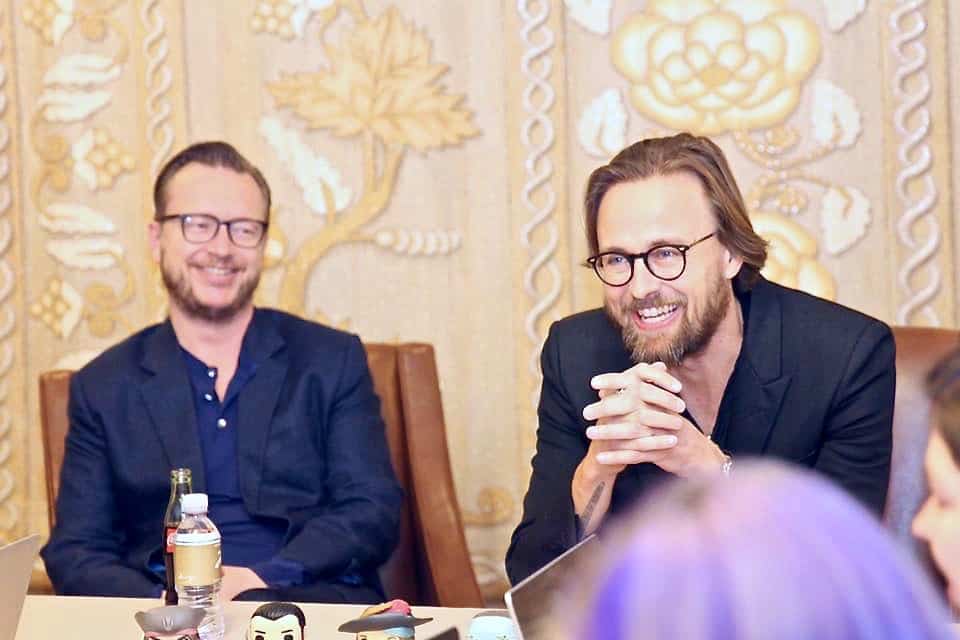 What do you want people to walk away with from this film?

Joachim: Something that was very important for us was the emotional core of the story, the family theme that the film has. Treasure is not always a chest of gold it can be other things even for a pirate. We were inspired by the first movie in the series that had a big heart. Then of course you have the adventure, scares, and comedy. I hope that the audience will be moved by it as well.

Pirates of the Caribbean: Dead Men Tell No Tales is in theaters everywhere! 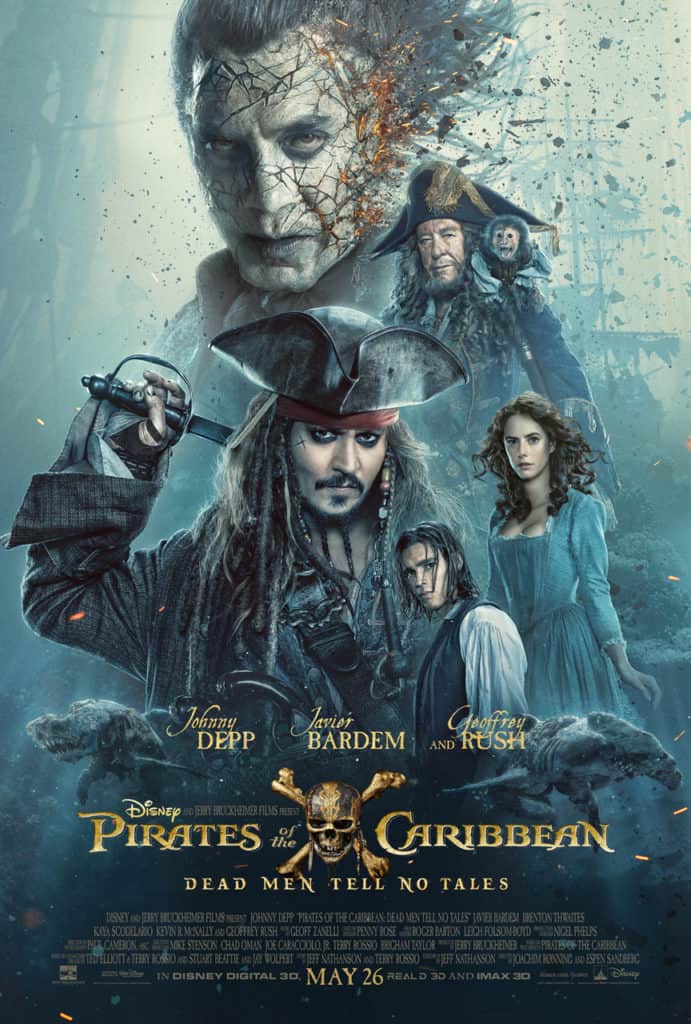