The new Toy Story 4 Trailer and poster are here! I'm loving seeing more of Forky and Bo Peep's new boss toy in charge attitude. Plus we are meeting some new toys. I thought Ducky and Bunny were the only ones, but surprise there are 4 introduced here.

The 1950s pull-string doll's name is Gabby Gabby. Although she looks adorable, a defect in her pull-spring voice box has her sounding creepy. She has spent more than 60 years forgotten in the depths of a jam-packed antique store. Which as I said in my reaction is my place of nightmares. Her only companions are a band of voiceless ventriloquist dummies. She knows someone will want her if only she can find a working voice box to repair hers.  Gabby Gabby is voiced by Christina Hendricks.

I will admit I was creeped out by the ventriloquist dummy. Benson is their leader and Gabby Gabby’s right hand man, er dummy. He leads the small group of ventriloquist dummies that serve as Gabby's henchmen. With no person to give them a voice, these silent toys patrol the antique store with a looming quietness that is inherently unsettling. Okay, that creeps me out more. *Shudders*

Duke Caboom is a 1970s toy based on Canada’s greatest stuntman. Riding his powerful Caboom stunt-cycle, Duke is always prepared to show off his stunt poses with confidence and swagger. However, Woody learns quickly that Duke has an Achilles heel: He has never been able to do the awesome stunts advertised in his own toy commercial. For years, Duke has been sitting in an antique store, constantly reliving the failures of his tragic past. I kinda feel bad likening him to Ben Stiller in Dodgeball now! Duke Caboom is voiced by Keanu Reeves. 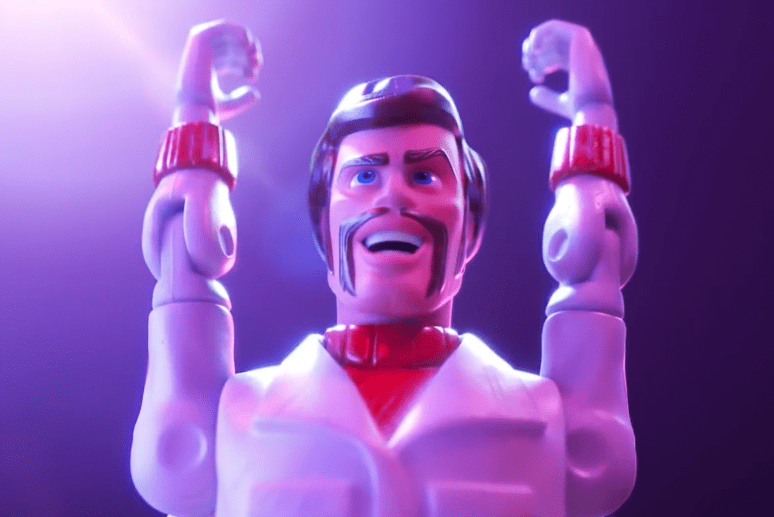