The witches are back! Hocus Pocus 2 is a wicked good time with the right balance of fun, camp, and yes throwbacks to the original. Are you ready to return to Salem? If so, read on to find all the Hocus Pocus 2 easter eggs and callbacks I found.

Spoiler warning if you have not watched Hocus Pocus 2. 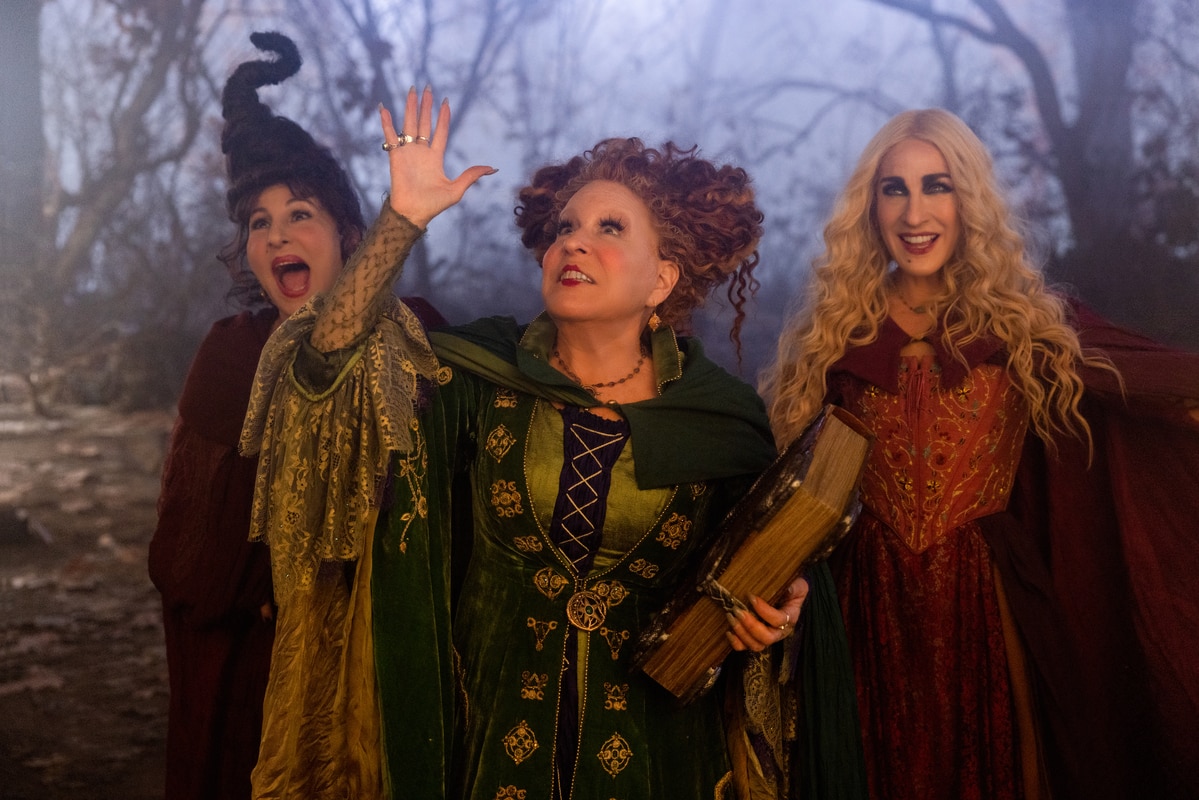 The Disney Castle logo was changed to be more eerie and fit the setting of Salem during the time the Sanderson Sisters were young. It is not the new 1oo years logo as some people reported it to be.

Just like the first film, Hocus Pocus 2 begins in the past. Winifred has a run-in with the Reverend Traske played by Tony Hale who also plays the Mayor Traske when the movie does a time jump to present day.

Billy Butcherson is also a young teen in the village.

The sisters run away to the woods, they are all a little scared. Mary suggests forming a calming circle. Unlike in the original, Winifred agrees without snapping at her sister. 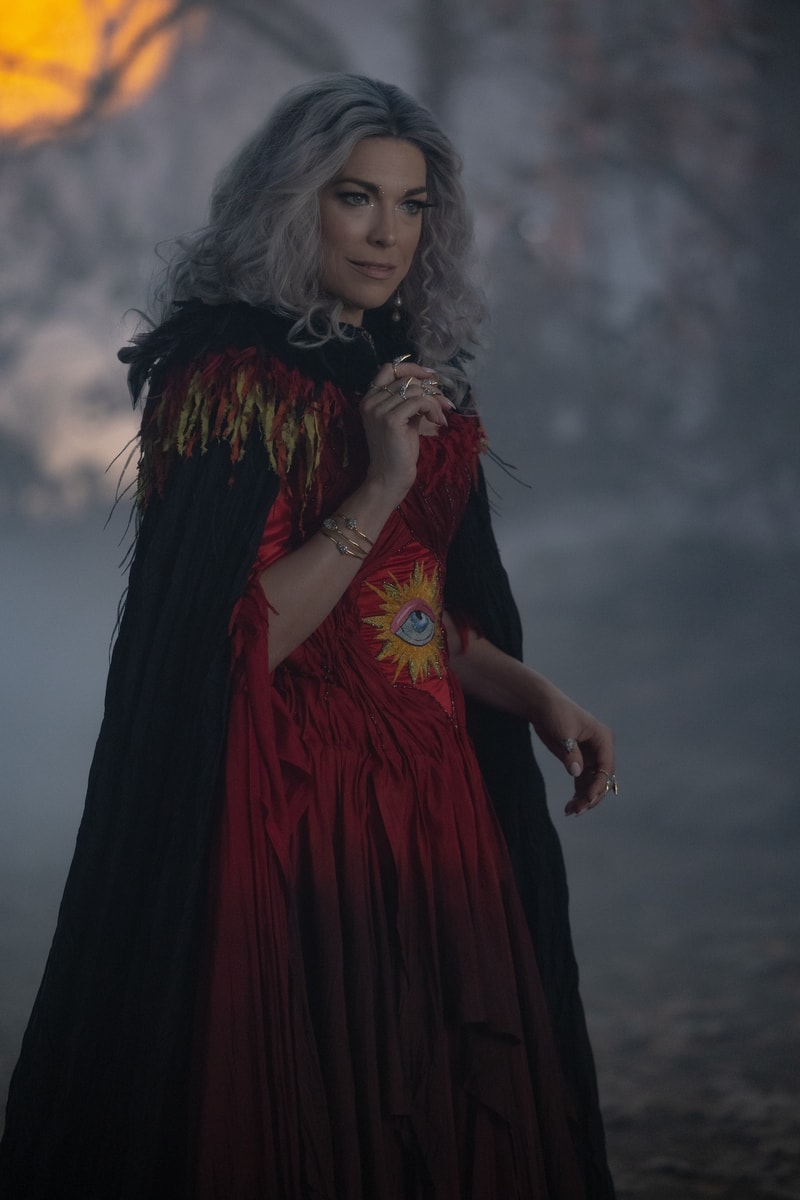 As the girls calm themselves, a voice is heard singing Come Little Children. The voice belongs to Mother Witch played by Hannah Waddingham. The song lures Sarah close to her. Ironic, considering Sarah is the one who sings the same song to lure children to her and her sisters.

The witch also tries to get Sarah to drink the Life Potion.

Mother Witch hands over Book to Winifred. As the girls look through the spells they see one for Cat Transformations. That is the spell they use on Thackery Binx. Mary wants Winifred to use it on John Pritchett.

The Mother Witch's cloak has similar colors to Dani's witch outfit in the original. 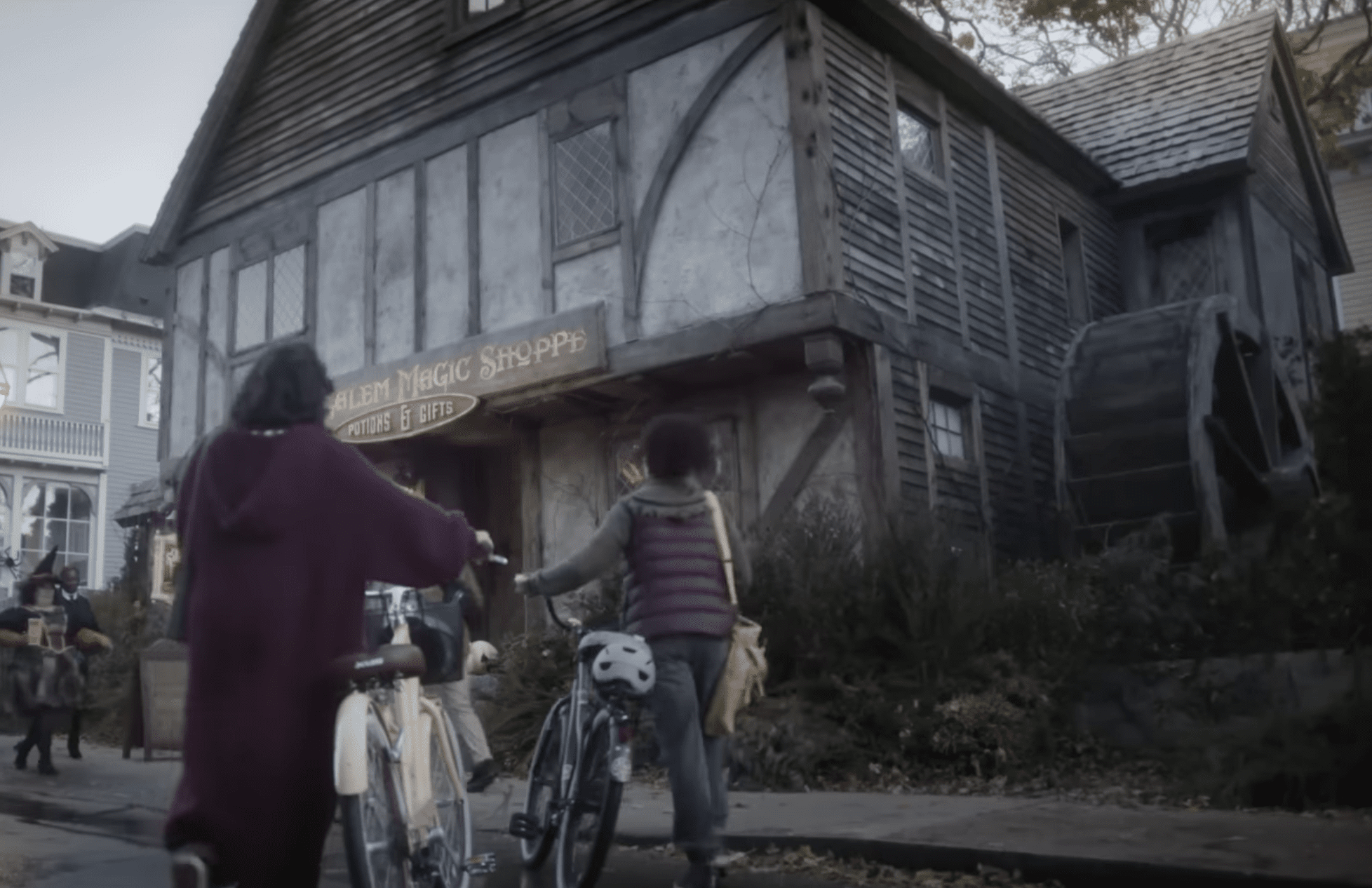 Skeleton Sam by LVCRFT is the song heard playing after the time jump to Modern Day Salem.

The old Sanderson Sisters' home has been converted into The Old Salem Magic Shoppe.

Gilbert, the owner of the shop, is telling the story of the Sanderson Sisters to a group of parents and children. He has Book locked up in a case and a Black Cat. During his story they show flashbacks from the original film when Emily Binx was killed by the witches. 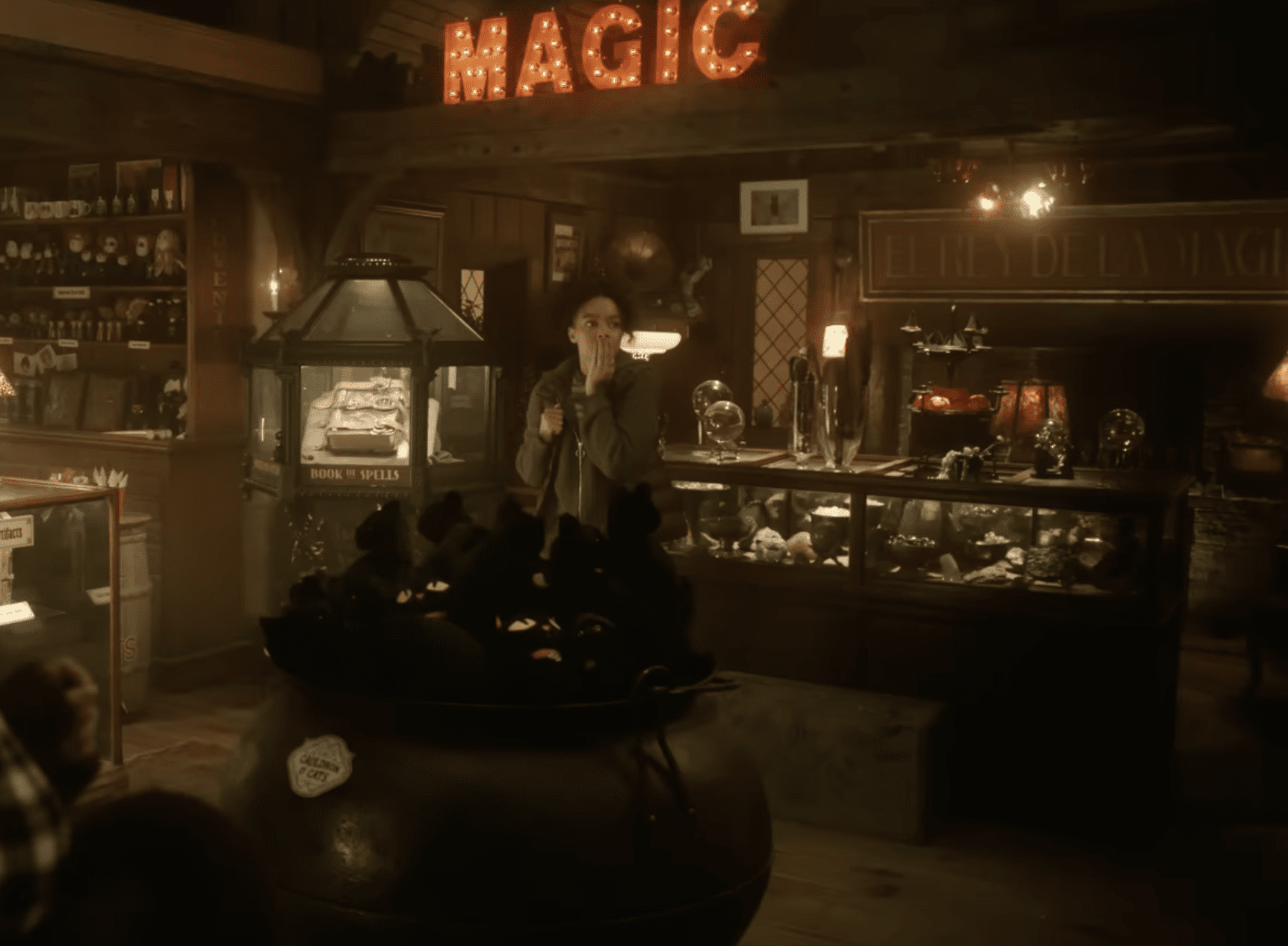 Becca has just turned 16, an age when it is said witches get their powers. As a gift, Gilbert gives her a candle that he made specially for her. We see where this is going right? She goes out into the Forbidden Woods and lights the candle. The flame quickly turns black, it is a real Black Flame Candle.

Come Little Children, this time sung by Sarah, can be heard right before the ground splits apart and the witches return.

The Sanderson Sisters break out into song, The Witches Are Back. This song was written by Elton John and Bernard J.P. Taupin.

Winifred calls to Book. It awakens in the case. She wants to brew the life potion. Mary recalls how they were tricked by the fake sunrise last time they were on Earth.

When they catch Becca and Izzy, the girls pretend they are witches too, like Dani did in the original.

At Walgreens, after they learn that lotions aren't potions, the girls use salt to get away from them. In the original, Allison used salt to protect herself and Dani. Winifred called her a clever white witch.

Also in the store, the sisters do their iconic Sanderson Sisters walk.

Winifred warns her sisters that their fates will be sealed at Sunrise. Again. 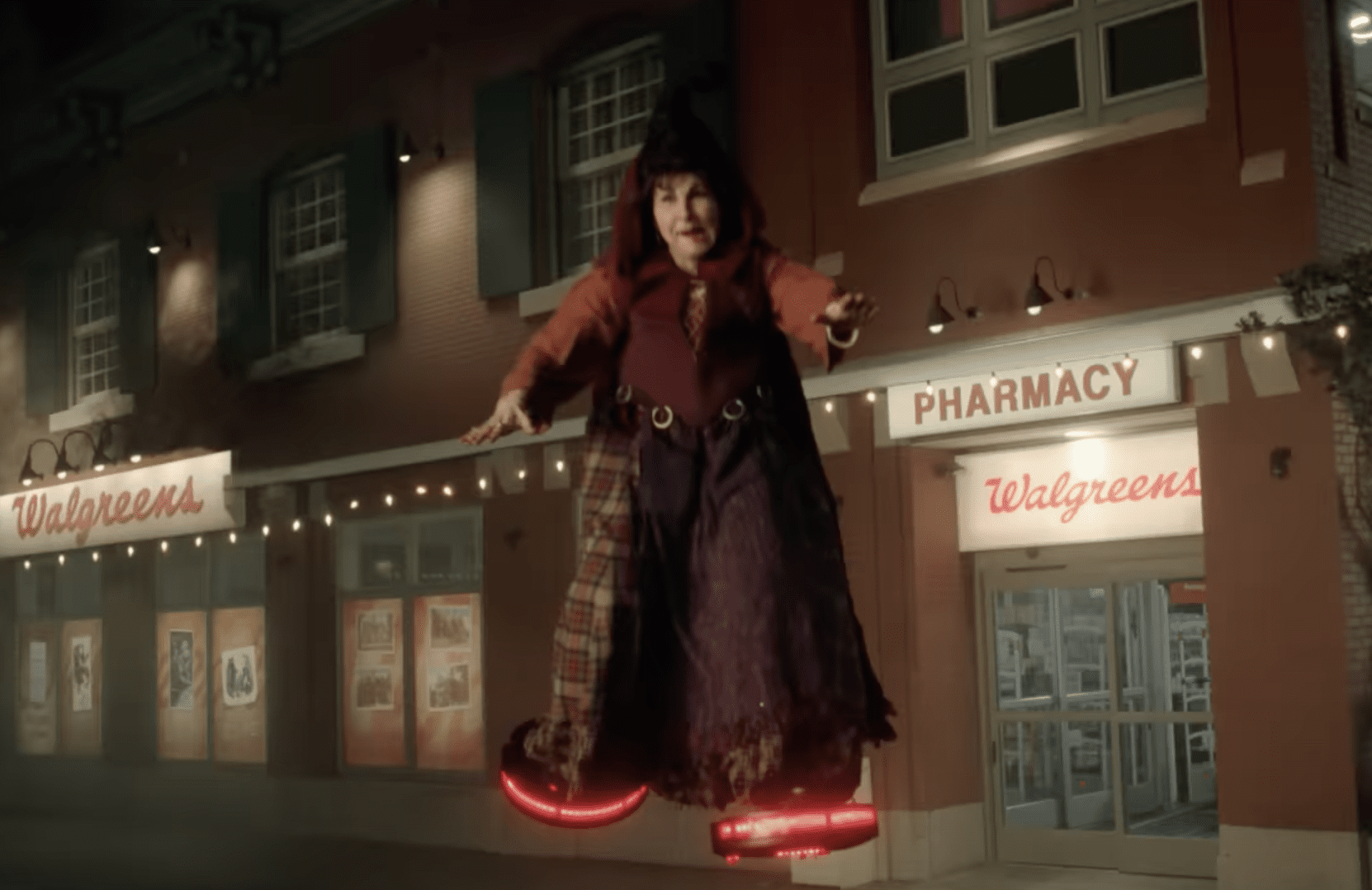 When the witches make it to their old home, Sarah looks for her lucky rat tails.

Young Gilbert is using a Mickey and Minnie Mouse pillowcase for his candy. He remembers seeing the witches fly through the sky in 1993 and also saw when they turned to dust.

Gilbert reveals he made a new Black Flame Candle with help from Book. 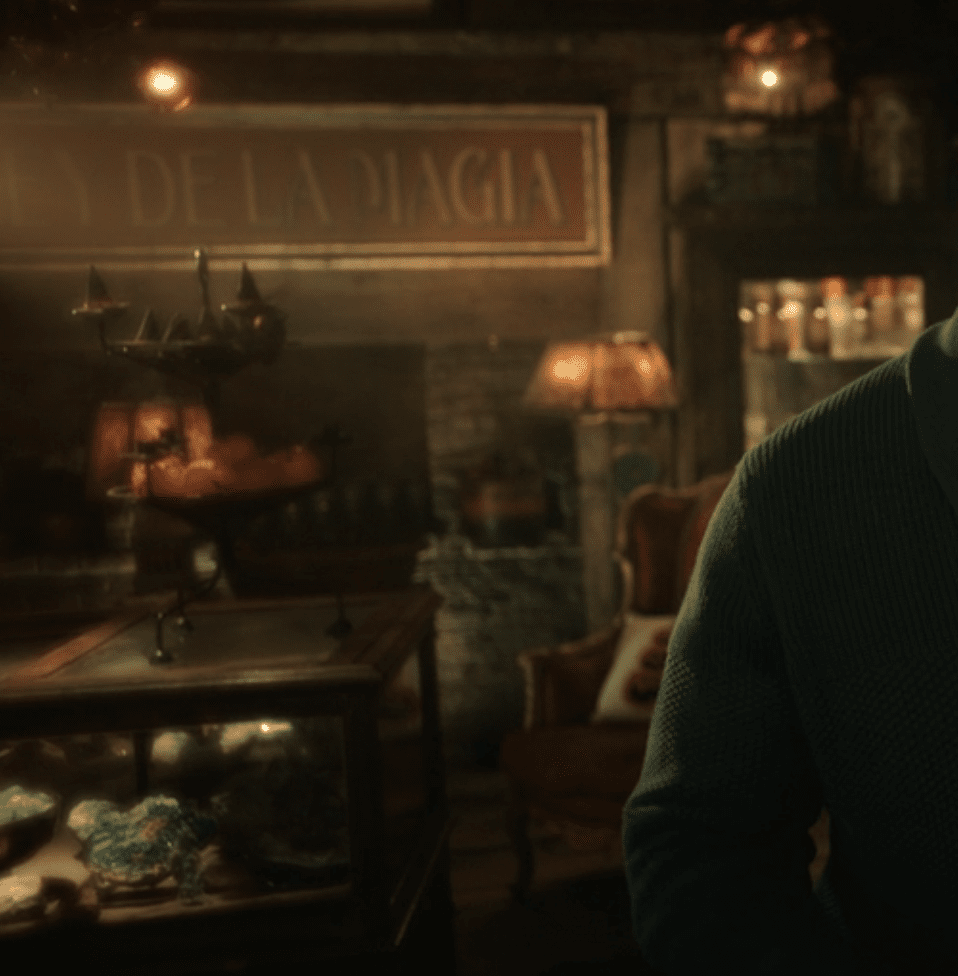 HIDDEN MICKEY: When Gilbert is telling the witches about Reverend Traske, behind him in the display case is a green crystal in the shape of Mickey Mouse.

Cobweb, the Black Cat, jumps onto the table in front of the Witches, Sarah thinks that it is Thackery Binx.

Gilbert digs up Billy who was never actually put back to sleep after the events of the first movie. Billy tells Gilbert what actually happened with Winifred. Unlike what we thought to be true, Billy was not Winifred's lover. He shared one kiss with her when they were children.

Behind the mayor in line is a couple dressed like satan and his wife Penny from the original film. In front of him is a guy in a Penguin Costume, a possible nod to Mary Poppins. 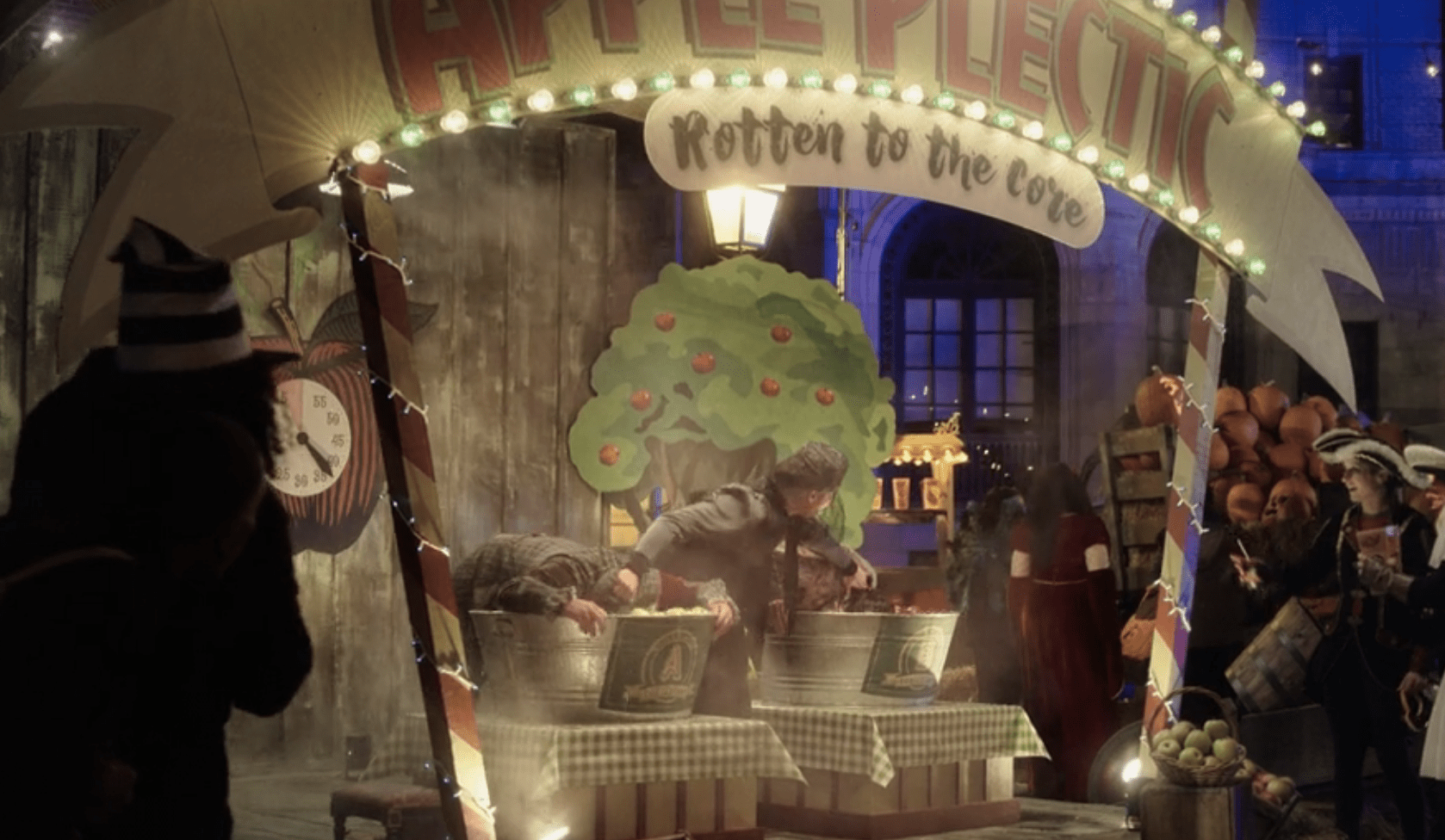 The apple bobbing booth is called Rotten to the Core. That is the name of first song in Descendants, another Disney Channel Original movie that was directed by Kenny Ortega who directed the first Hocus Pocus.

Kathy Najimy who plays Mary was also in Descendants. She played the Evil Queen.

Winifred, Sarah, and Mary eventually find a Sanderson Sisters costume contest. The MC asks if they are looking for the stage. Winifred tells him always. Again the townspeople think this is just a bit. Once again they are put under a spell by the witches, this time to find the mayor. The sisters sing “One Way Or Another.”

Among the Halloween party goers in the street, someone is dressed in the same Madonna costume worn by Max and Dani's mom Jenny Dennison.

There is also a Tinker Bell and Sorcerer Mickey hat seen in the costumed dance number.

While they are searching for him they fly up to several windows. At the first house, the couple is watching the original Hocus Pocus. 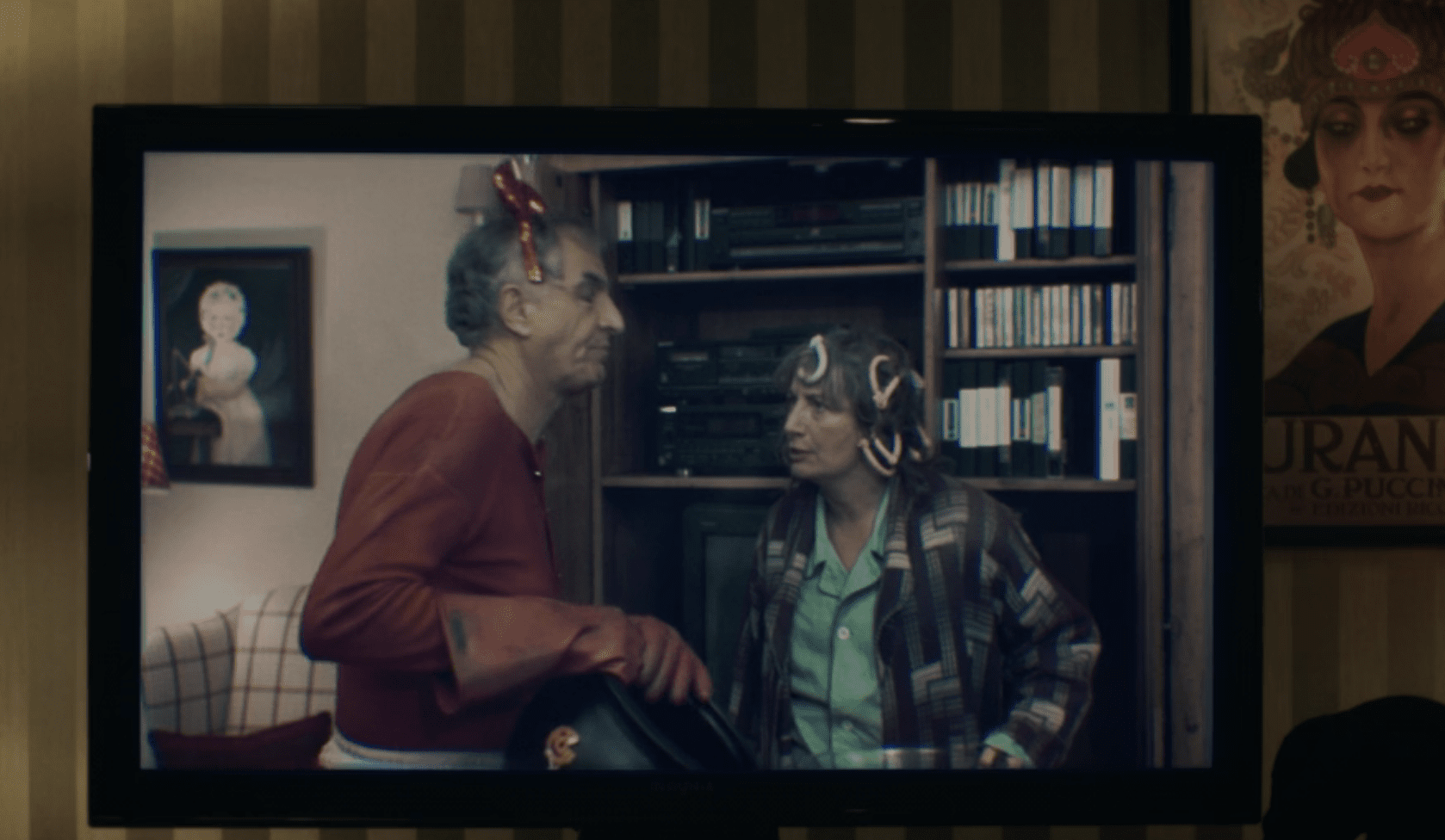 In the garage Mary says “I smell children” and calls Becca Shishka-Baby, something she calls Dani in the original.

Again, Winifred pushes Sarah into something she is unsure of.

Billy's mouth gets sewn shut again. At least this time without the moths.

As they are fighting the teens in the woods, Mary says Heavens to Murgatroyd, the catchphrase of Snagglepuss.

When the witches disappear again, Mary and Sarah say the same words they did before. Sarah says goodbye, Mary says bye-bye. Instead of Winnie calling for Book, she calls for Sisters.

The three friends leave the forbidden woods and start walking like the Sanderson Sisters.

Post Credit Scene: The black cat Cobweb jumps onto a shelf with a box marked B.F. Candle #2. Gilbert made more than one Black Flame Candle. 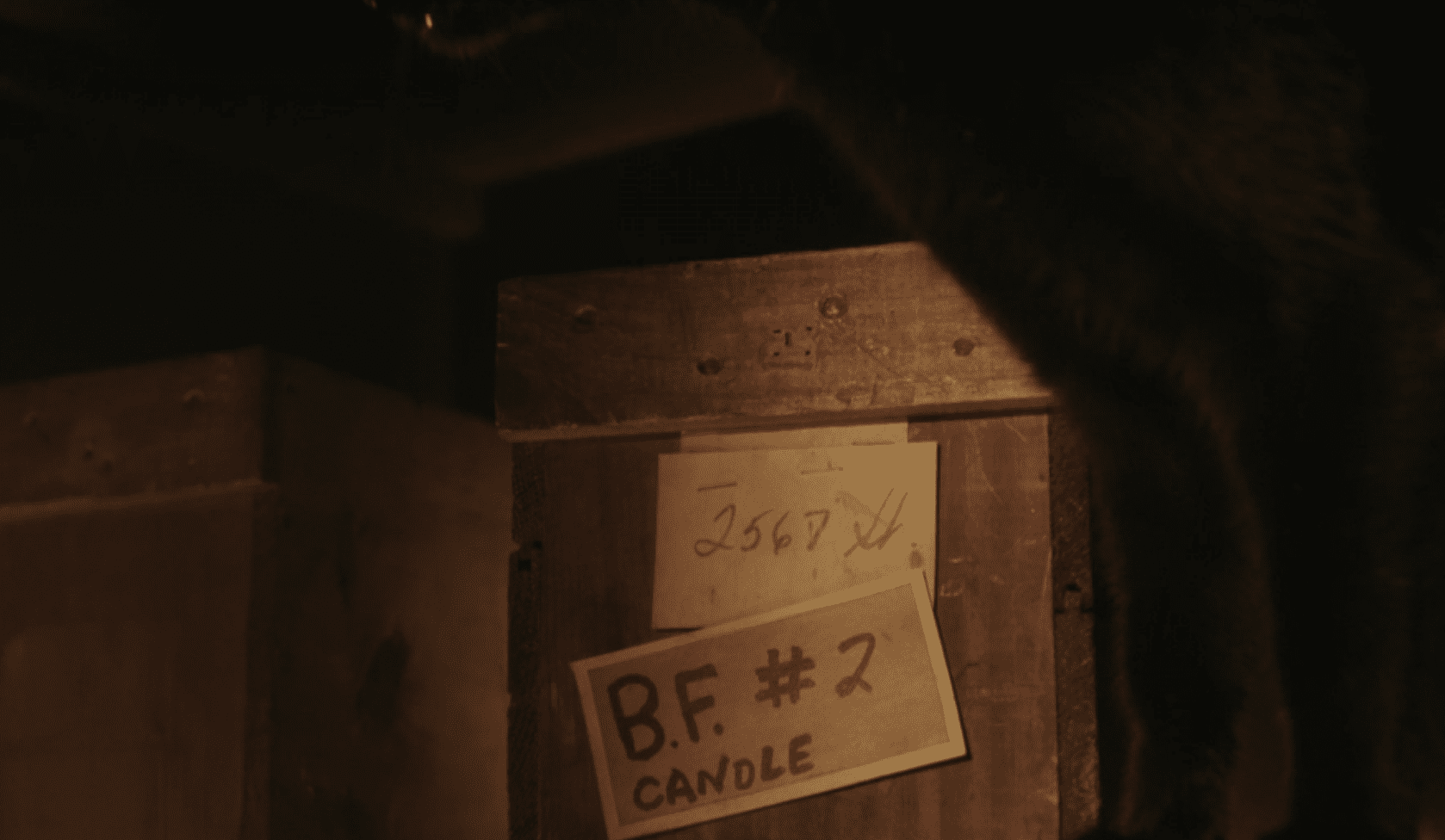