The Disney Investor Day panels debuted a lot of new content including trailers for WandaVision, Falcon and The Winter Soldier, and Loki. The God of Mischief is back and there was a lot to unpack in the new Loki trailer. 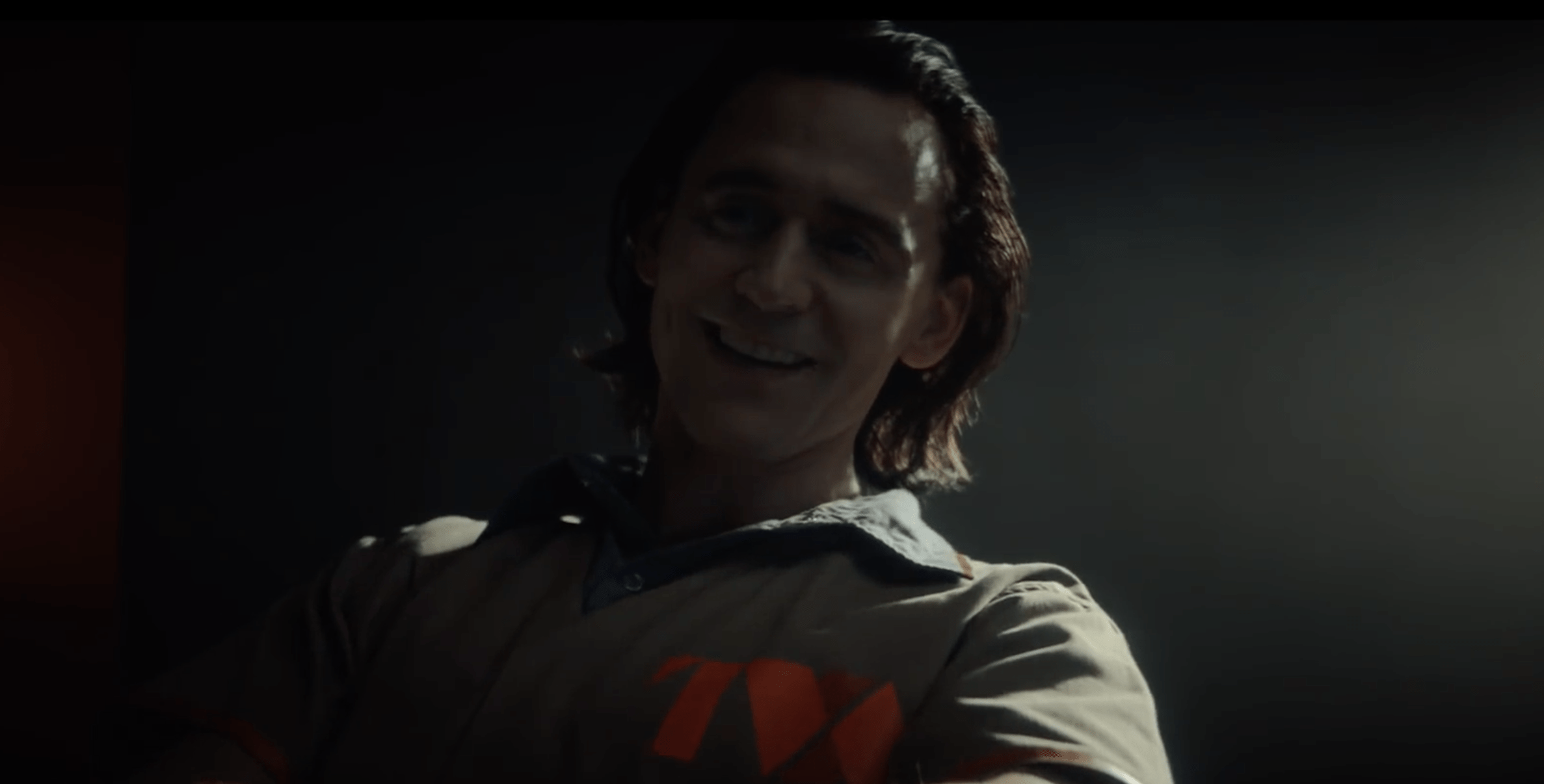 Loki is one of the most highly anticipated Marvel shows coming to Disney Plus. And finally we got a glimpse as to what kinds of time adventures Loki will be going on during the show. The trailer itself jumps into different timelines with 2012 Loki and the audience along for the ride. With mysterious bad guys and a surprising cameo, Loki the show is going to be just as tricky and fun as its namesake.

The trailer begins where we last saw the living Loki, in 2012 New York City, escaping with the Tesseract. This is the exact same shot from Avengers Endgame, nothing too shocking here.

Related: Every Avengers Endgame Easter Egg and Cameo You May Have Missed

Who Is The TVA?

Loki has been detained it seems by the Time Variance Authority. The TVA is a massive bureaucracy that governs a significant number of realities in the multiverse. Essentially the TVA are timeline monitors although they don't always succeed in their missions. Their scope of influence is bordered by Alioth, as well as Kang the Conqueror, the Delubric Consortium, and Revelation at different eras throughout the time.

Loki is shown riding an elevator or sorts down into the depth of the TVA. He is riding with Owen Wilson's character who is most likely Mobius M. Mobius or Justice Peace.

Also seen in that shot is a collar around Loki's neck. This is similar to the one use on Wanda at the end of Captain America Civil War. It has the ability to null their power sets, meaning the TVA knows exactly how dangerous the God of Mischief is.

This isn't Loki, but rather some other villain and most likely the one the TVA cuts a deal with him for to catch. There isn't much to see in the trailer, but there is a strong possibility the hooded figure is Enchantress and formidable foe for Loki. Her powers are extensive and include superhuman everything alongside sorcery where she can do everything Loki has been known to do and more.

If it isn't Enchantress then Marvel may just go the route of an eviler Loki. The idea of Multiverse Loki is supported later in the trailer.

It isn't the locomotive shape of the comics but this appears to be the TVA time machine, their window into other timelines.

The last Director of the TVA created the Time Keepers, the last three beings who exist in the remaining timeline in the universe.

Loki is seen with Mobius/Peace watching his greatest hits play across the screen. He appears to get uncomfortable watching his life play out. Remember this is 2012 Loki, still mischievous and less friendly towards his brother and other Avengers. He had no idea what was going to happen to him in the future.

A variation of Roxxon Corp, this store is clearly owned and used by Roxxon for their nefarious dealings. Loki is with the TVA in this shot, clearly after someone. And that someone is watching the security cameras.

Enchantress is watching and sizing up her opponents.

It's interesting that that the stain glassed picture on the wall resembles a devil. Mephisto, the most famous devil of the Marvel Universe has been rumored for awhile now to be joining the MCU. Not traditionally associated with or tied to the TVA, this could be another partnership the TVA might soon regret.

Somewhere in the timeline, Loki will come across Natasha. Black Widow is seen sitting and watching a ship land or another being coming in hot to find her. Truth be told, this could also be Lady Loki using her powers to appear as a familiar face. Loki did something similar in Thor The Dark World when he transformed into Captain America.

Loki lands himself within sight of the ruined Avengers Tower and New York City. This places him well into the future (again this is 2012 Loki). It will be interesting to see him react to all the major changes that occur ahead of his time.

Related: 50+ Avengers Infinity War Easter Eggs You May Have Missed

Modern Loki in a Face/Off Nicolas Cage looking suit is seen boarding an airplane. The FBI couldn't solve it because it was Loki all along. DB Cooper is the pseudonym of an unidentified man who hijacked a Boeing 727 aircraft between Portland and Seattle on the afternoon of November 24, 1971.

Loki in the TVA

In a different shot of Black Widow's location we see that Loki is headed into a massive fight. He is racing to get into a building wearing a TVA blazer.

In a blur Loki is seen taking on multiple adversaries. In one shot, there are multiple Loki seen fighting. Unlike his duplication in Avengers, these Loki do not look the same, which means they are from different timelines.

In the current MCU timeline Heimdall and Loki are both dead. However, wherever or whenever Loki is Heimdall is clearly still alive. Or he's been reincarnated like he was in the comic books. Either way, it will be fun to see those 3 reunite without Thanos to ruin the party.

Loki grins before jumping from the airplane challenging both Hemidall and his brother to be ready. As he soars towards Earth the Bifrost quickly snatches him up.

In reference to the multiverse of Lokis earlier in the trailer, this last part seems from that scene as well. Vote Loki is from the 2016 Marvel Comics of the same name.

This scene with President Loki and other Loki is set in the 1980s. Polybius was a fictitious 1980s arcade game. It served as inspiration for several free and commercial games by the same name. The legend of Polybius says the game was part of a government-run crowdsourced psychology experiment based in Portland, Oregon during 1981.  Loki is all about mind-games, this shouldn't surprise anyone that it happens to be in the show. 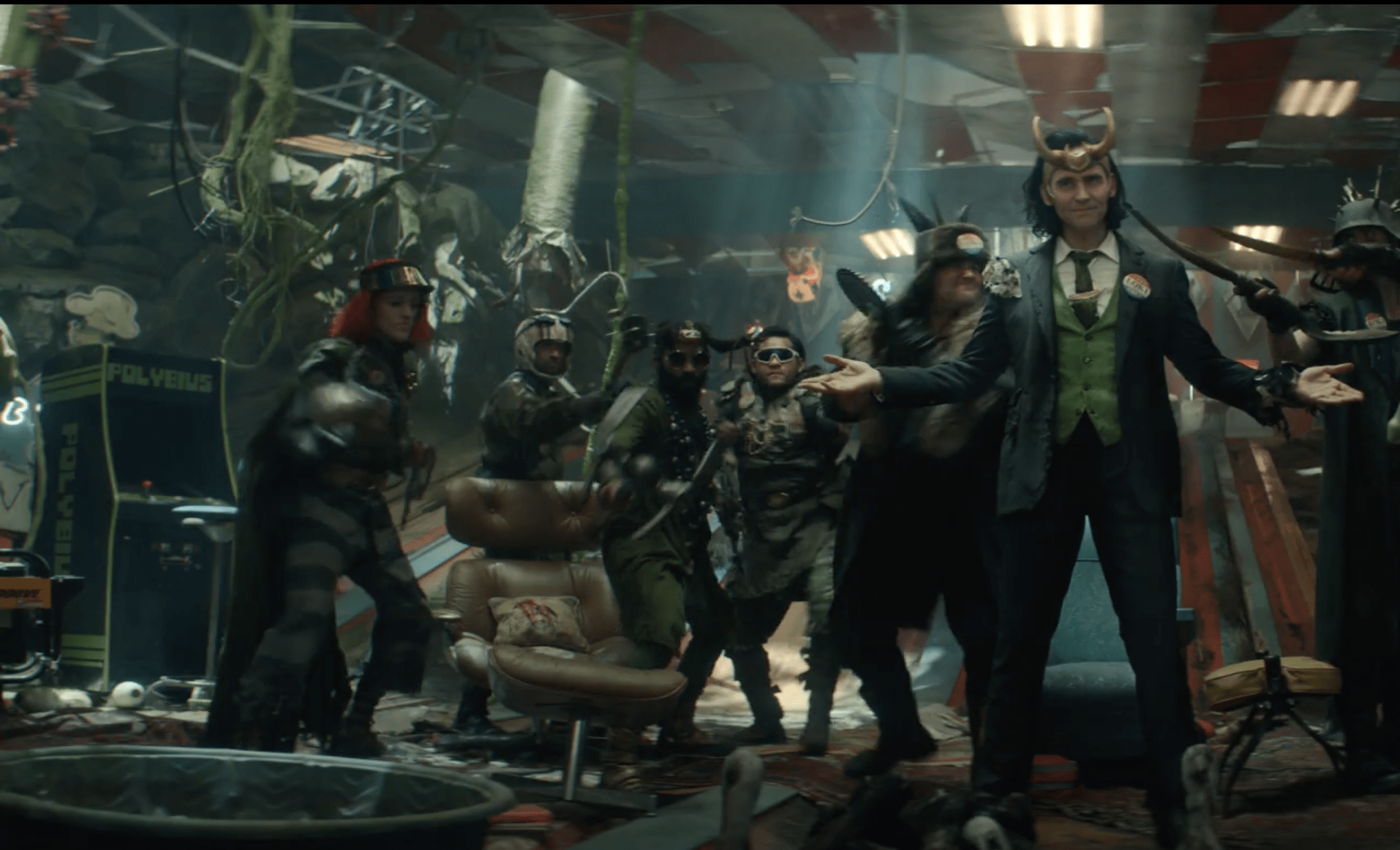 Loki begins streaming on Disney+ May 2021