Last week, Loki and Sylvie traveled to Lamentis and ended up being trapped on the moon that was about to be destroyed. The underhandedness of the TVA continues to be revealed, and with only 2 episodes left, Loki episode 4 was intense. Plus this is our first episode with a post credit scene. Let's find the easter eggs and get into this breakdown.

Spoilers ahead if you haven't watched Loki episode 4 “The Nexus Event.” 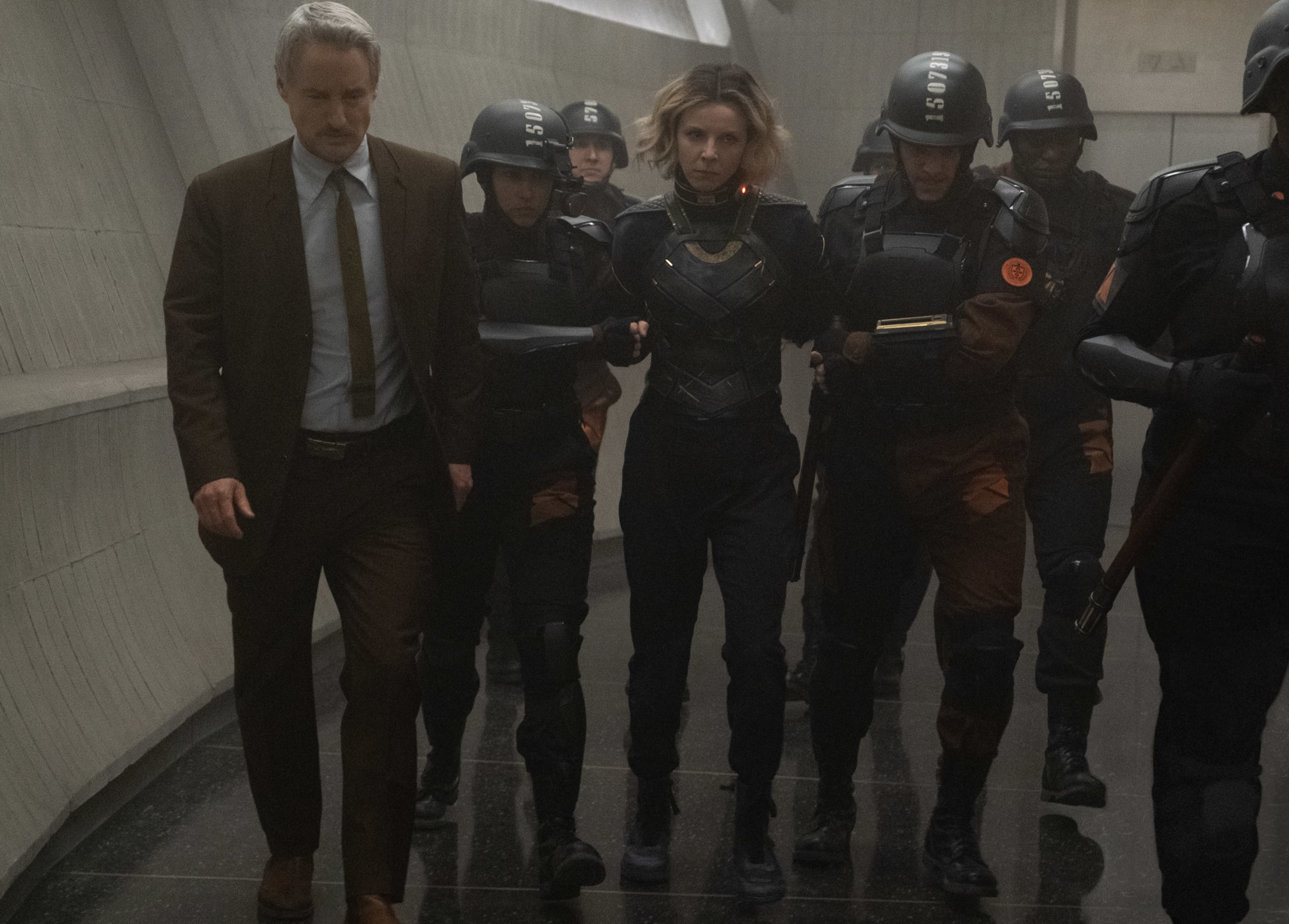 This episode begins on Asgard, but not the one we are familiar with. This is Sylvie's Asgard, and we see she is just a young girl playing in the throne room, recreating a battle between the Valkyrie and a dragon.

The TVA takes her from her home, claiming crimes against the scared timeline. Then they reset the timeline. Sylvie is shown going through the same process as Loki when he was captured by the TVA.

Renslayer is the Hunter that brings Sylvie in, but before the judge can try her case, Sylvie steals the TemPad and escapes.

In the present day, Renslayer enters the golden elevator, the same one that is suppose to take you to the Time Keepers.

She steps into a foggy room and in the mist are the three Time Keepers.

Renslayer reveals that Hunter C-20, the one Sylvie had taken hostage, is dead. Mobius is told to find the variants asap.

Back on Lamentis, the world is still ending. There is shot from the trailer here where a lot of fans mistook Sylvie for Black Widow.

Loki sits down with Sylvie and she says “The universe wants to break free, so it manifests chaos. Like me being born the Goddess of Mischief.”

She tells him they took her as a prisoner but she escaped. However every where and when she escaped to created a Nexus Event that was essentially a smoke flare to the TVA.

At the TVA, Mobius is frantically searching for them in the timeline. He even uses a magnified nexus threshold which will alert the TVA even if someone steps on the wrong leaf.

Sylvie wonders if what makes Loki a Loki is that they are destined to lose? Loki tells her they may lose but they never die.

Loki and Sylvie comforting each other moments before Lamentis completely is wiped out, creates a branch in the timeline strong enough to show up on the TVA screen. They are taken into custody by the TVA. Although they are prisoners they also managed to escape their deaths.

Mobius sends Loki through a red time door but before he is thrown through, Loki tells him the TVA is lying.

Loki is sent to Asgard, where he sees Lady Sif.

It's actually a Time Cell, where he is doomed to repeat a moment in time. This moment involved him cutting part of Sif's hair and not caring at all about the prank. He tries to reason with Sif and get her to help him, she just kicks his butt again.

This encounter is based on Norse Mythology. Lady Sif, the wife of Thor, has her hair cut off by Loki. Thor threatens him until he can fix it. In the show however, Sif doesn't need Thor's help.

Mobius wants to question Sylvie but Renslayer refuses, telling him to figure out what caused the Nexus Spike.

Hunter B-15 and others are guarding Sylvie. Mobius wonders why these two Loki are such pains when the TVA has brought in Titans, Kree, and vampires.

She wants to know if Loki said anything to Mobius and when he replies that Loki said the TVA is lying she gives him an interesting look. Earlier she asked about Hunter C-20, Mobius didn't tell her the truth.

Loki finally gets Sif to stop hitting him and Mobius brings him out of the Time Cell to talk.

Mobius wants to know what caused the Nexus Event on Lamentis. Loki denies everything before telling him that it was all his idea. He claims Sylvie visited him on Asgard a long time ago and they made their plans using apocalypses to hide in. He also says Sylvie is a pawn to him. Mobius casually mentions she's dead to see what Loki's reaction will be. He seems taken aback before he schools his features into the uncaring mask he wears so well.

That was all it took for Mobius to figure out what caused the spike in the timeline, two variants falling for each other. Loki and Sylvie have feelings for each other and that kind of thing can cause pure chaos that breaks reality.

Loki again tries to get Mobius to understand that the Time Keepers kidnapped everyone from the timeline. That the TVA is made up of Variants and that their memories have been erased. Memories that Sylvie can access through enchantment.

Hunter B-15 takes Sylvie through a door to another time.

Mobius is in Renslayer's office, closing the case. She signs off on his paperwork. Mobius asks why she wouldn't let him interrogate Sylvie.

She keeps asking him if you could go anywhere and anytime where would it be? He never answers. Renslayer tells him the Time Keepers want to oversee Sylvie's pruning and they want him there. He continues to ask about Hunter C-20 and you can tell he doesn't believe what he is being told.

While she places her trophy of Sylvie's sword on the shelf, Mobius switches her TemPad with his.

Hunter B-15 takes Sylvie back to Roxxcart so they can talk without setting off any branches. When Sylvie used enchantment on her before, B-15 saw something, memories of before she was with the TVA. B-15 doesn't believe her but Sylvie says she can't make memories, only use what is already there.

In the records room, Mobius uses Renslayer's TemPad to find out the truth about C-20. He finds her interrogation video where she is talking about her life, her memories before the TVA. He discovers that not only was Loki right but that Renslayer also knows the truth.

He goes to Loki, telling him that the Nexus Event he and Sylvie caused can bring everything down. Now that he knows Loki was telling the truth about the TVA he wants to help Loki and Sylvie bring it down.

Outside the Time Cell, Renslayer and several hunters are waiting for them. Mobius says if I could go anywhere it would be to where I was before the TVA.

Renslayer has Mobius pruned. She also discovers B-15 knows the truth and puts out an alert for her as well.

Sylvie and Loki step into the golden elevator with Renslayer. They stand before the Time Keepers who call them a cosmic disappointment before sentencing them to death. Loki and Sylvie are freed from their collars by Hunter B-15.

Renslayer and Sylvie fight while Loki takes on other Hunters.

Sylvie throws her sword taking the head off of one of the Time Keepers. They are nothing more than mindless androids, they are fake.

As Loki begins to confess his feelings for Sylvie, Renslayer kills him, pruning him from the timeline. Sylvie refuses to kill Renslayer and wants to know everything about the TVA.

Loki awakes, wondering if this is Hel. He looks up to find King Loki, Kid Loki, Boastful Loki, and crocodile Loki staring at him. Avengers Tower is seen in the background. This could be where all the pruned variants go, it reminds me of Battleworld created by the Beyonder in the comics.