It's good to be bad! Rock your favorite Villain Kid look with this DIY Descendants Carlos De Vil costume, perfect for Halloween, Mickey's Not So Scary Halloween Party, or to wear while watching Descendants for the millionth time. Come on I know it's not just my house who has the movie and soundtrack on repeat. Anyways, read on to turn your kid into the coolest, pup loving kid in Auradon. 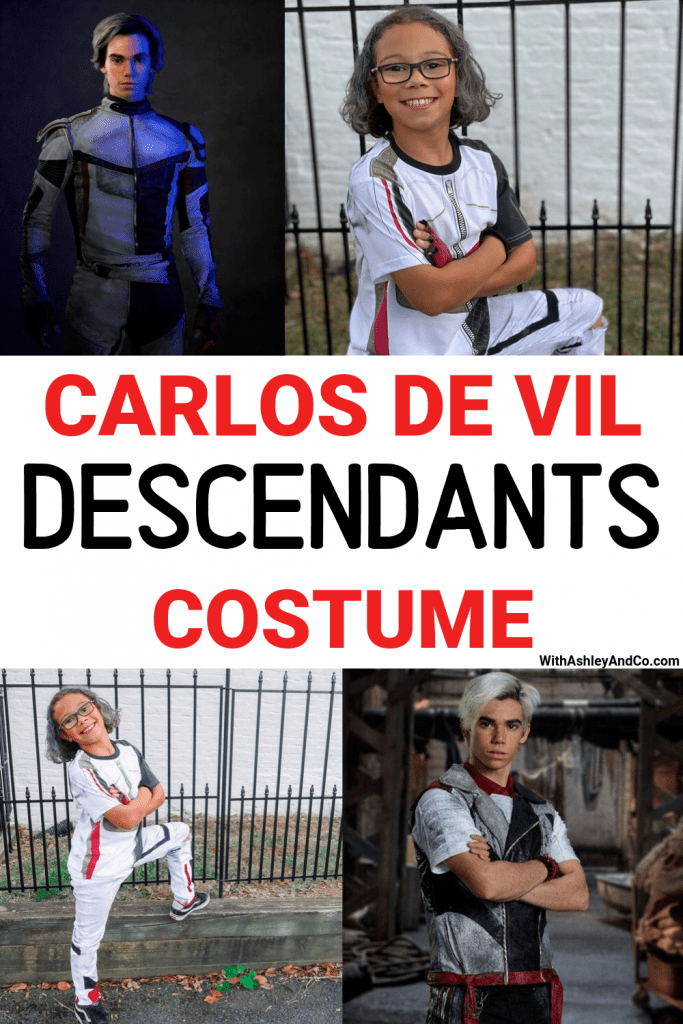 *Affiliate links may be used below

Carlos has been my son's favorite character since the beginning of the Descendants franchise. He related to him for his epic dance moves, love of singing, and joy of hanging with his favorite dog. They even kind of look alike with the crazy hair. 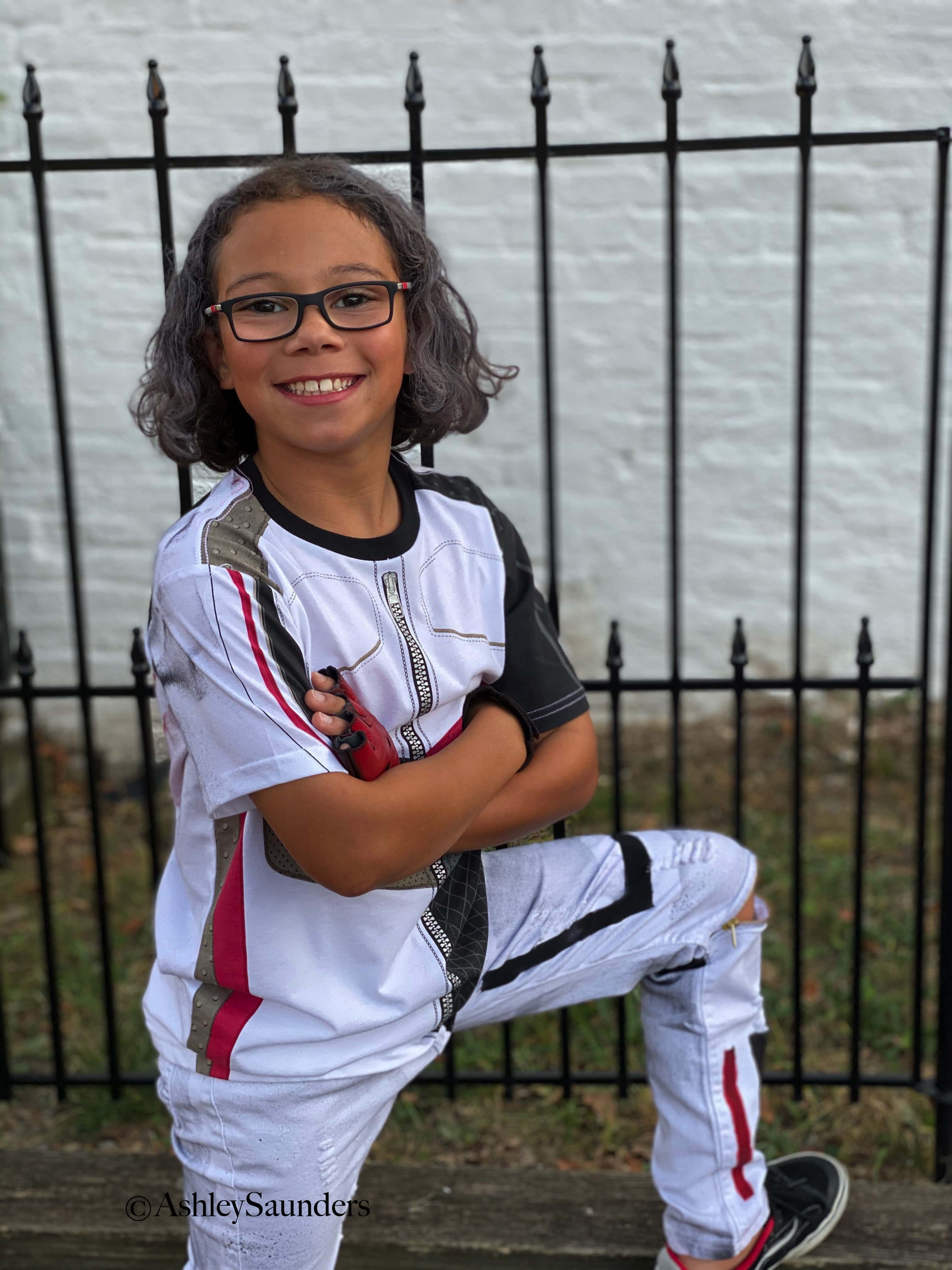 When we were talking Halloween costumes, Descendants 3 had just come out so naturally everything in my house was about that. Want to hear a song? Good to Be Bad. Movie Night? Duh Mommy. Can we please switch the cds in the car? Yes put in Descendants 2. Go ahead ask me a lyric or anything about the movies, I know it all.

Naturally both kids wanted to rock Halloween with some wickedly cool Descendants costumes. Easy enough for the girls, you can find Mal, Uma, Audrey, and Evie at ShopDisney.com. The boys though? Nothing. They have one costume shirt for Carlos but that was it. So my son appealed to my crafty side and threw in how amazing I am at everything. 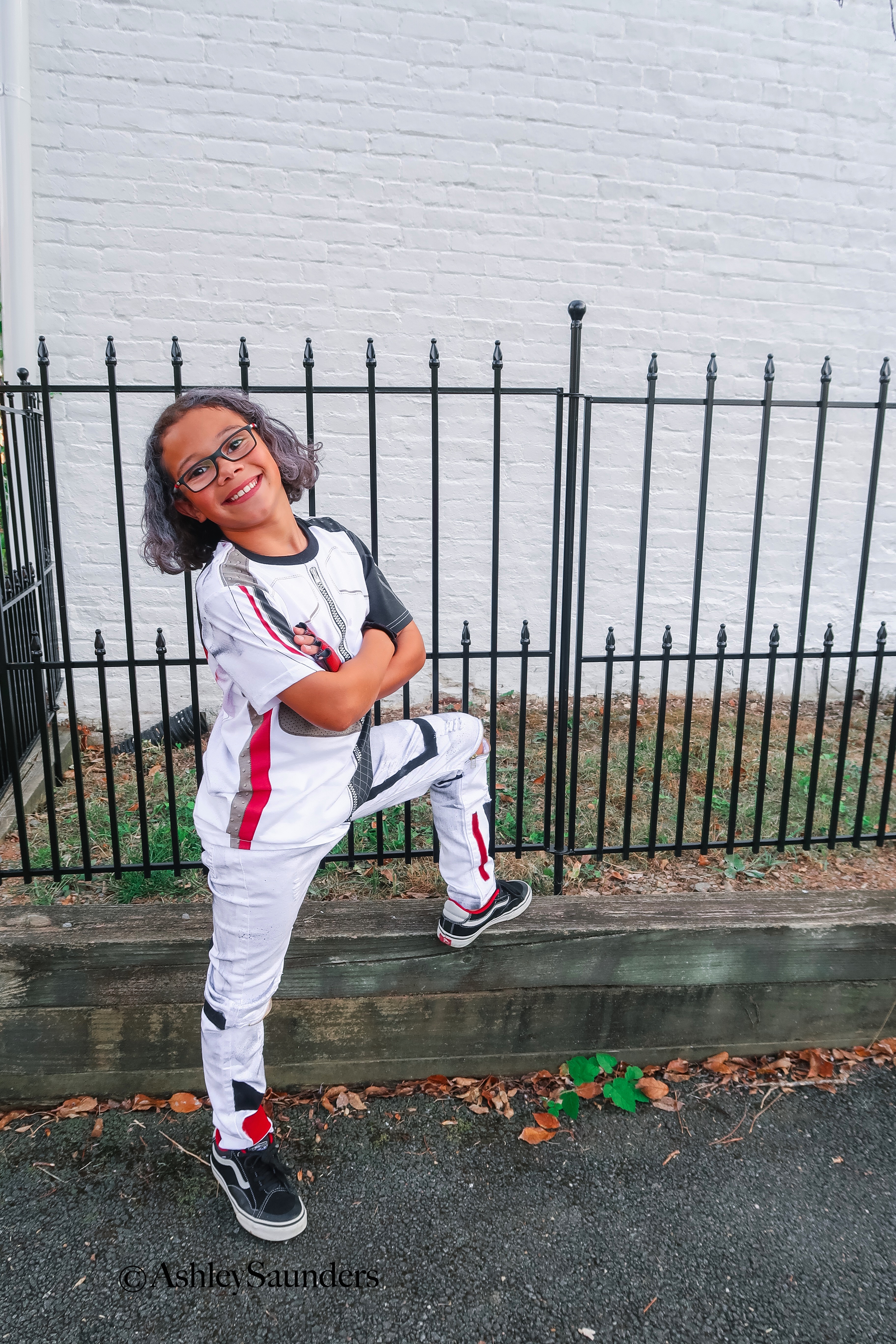 Fine kid. I'll make you a costume. How could I say no to that face. I did my research, gathered my supplies, and went to work. The end result was one excited boy who is telling everyone we see how awesome his Mommy is for making him a Carlos costume. 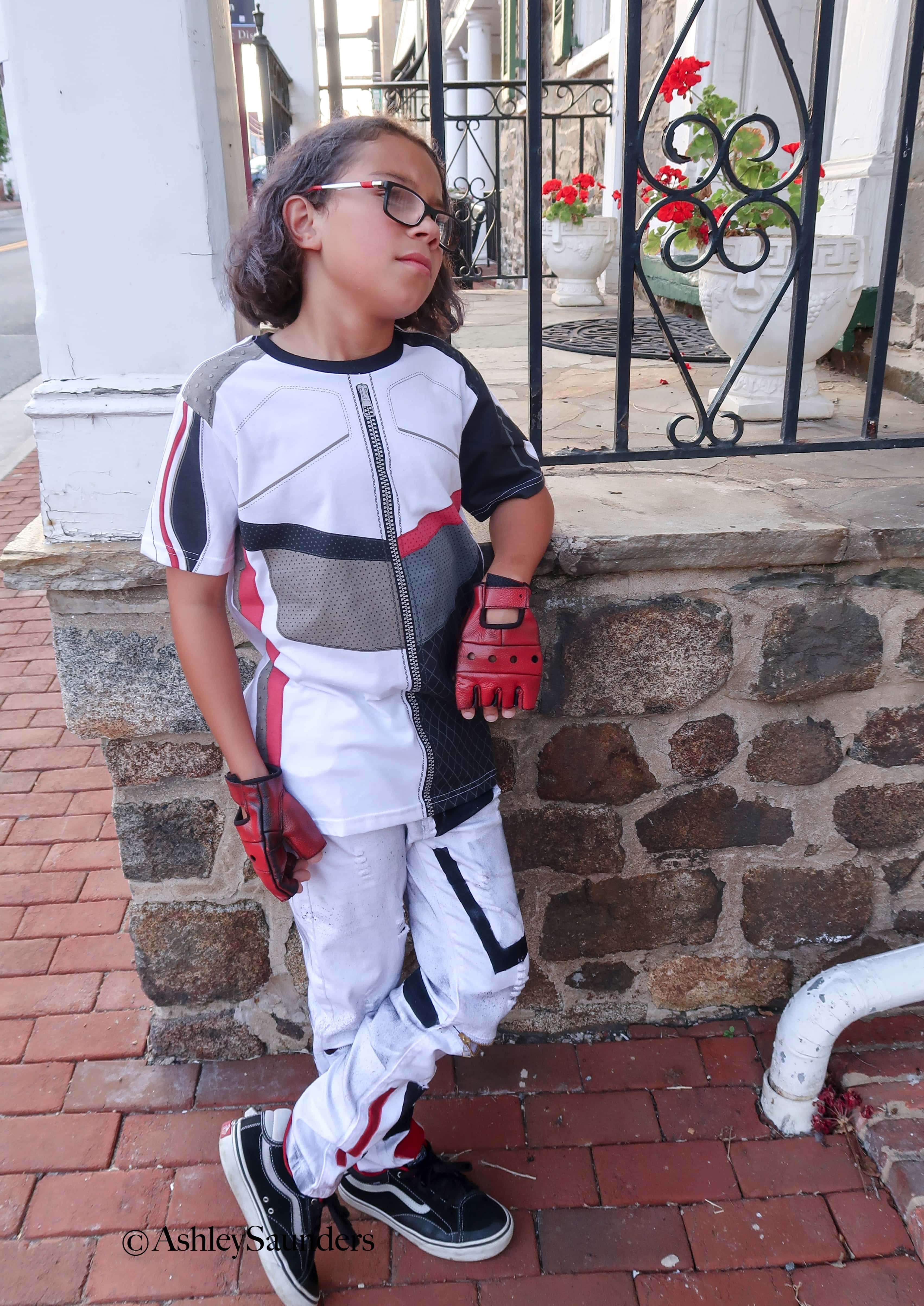 By the way, this pose was all him. He saw a picture of Cameron Boyce, as Carlos, online and told me he had wanted to stand like that. He calls it his Chillin' Like A Villain look. I know I'm biased but darn he looks so stinking cute here.

The back of the shirt took a little more effort than the taping off of the pants. I sketched out the bone design seen on Carlos in Descendants 3. It's slightly off center in the film which required me to ignore my perfectionist side and place it where we see it on Carlos. And yeah I'm telling you this so that no one can say I didn't put this in the center. 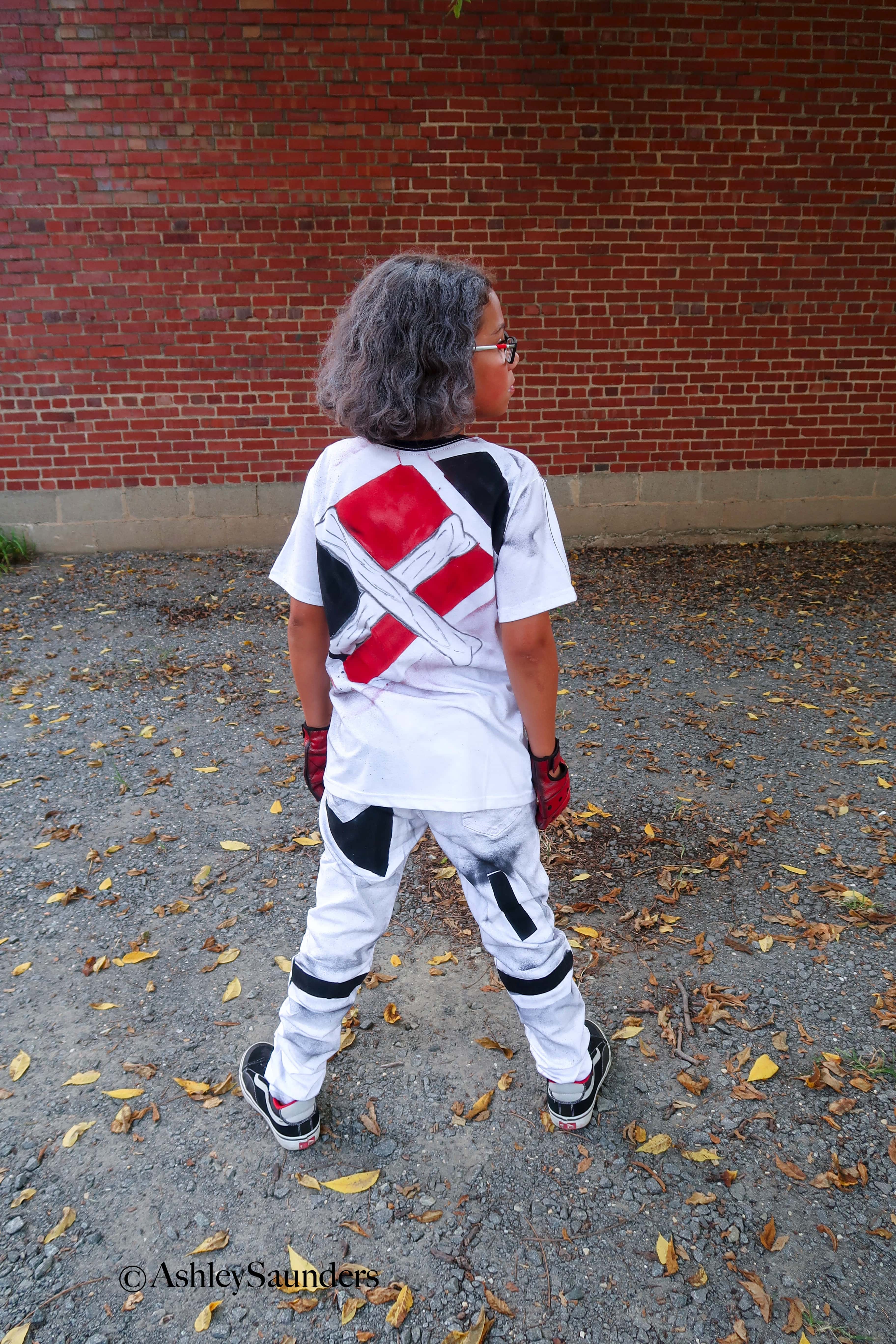 I recommend buying 2 of the black fabric spray paints because this is the color you are using the most.

Follow instructions for use on all spray paints. Try to spray all paints in a well ventiliated area. 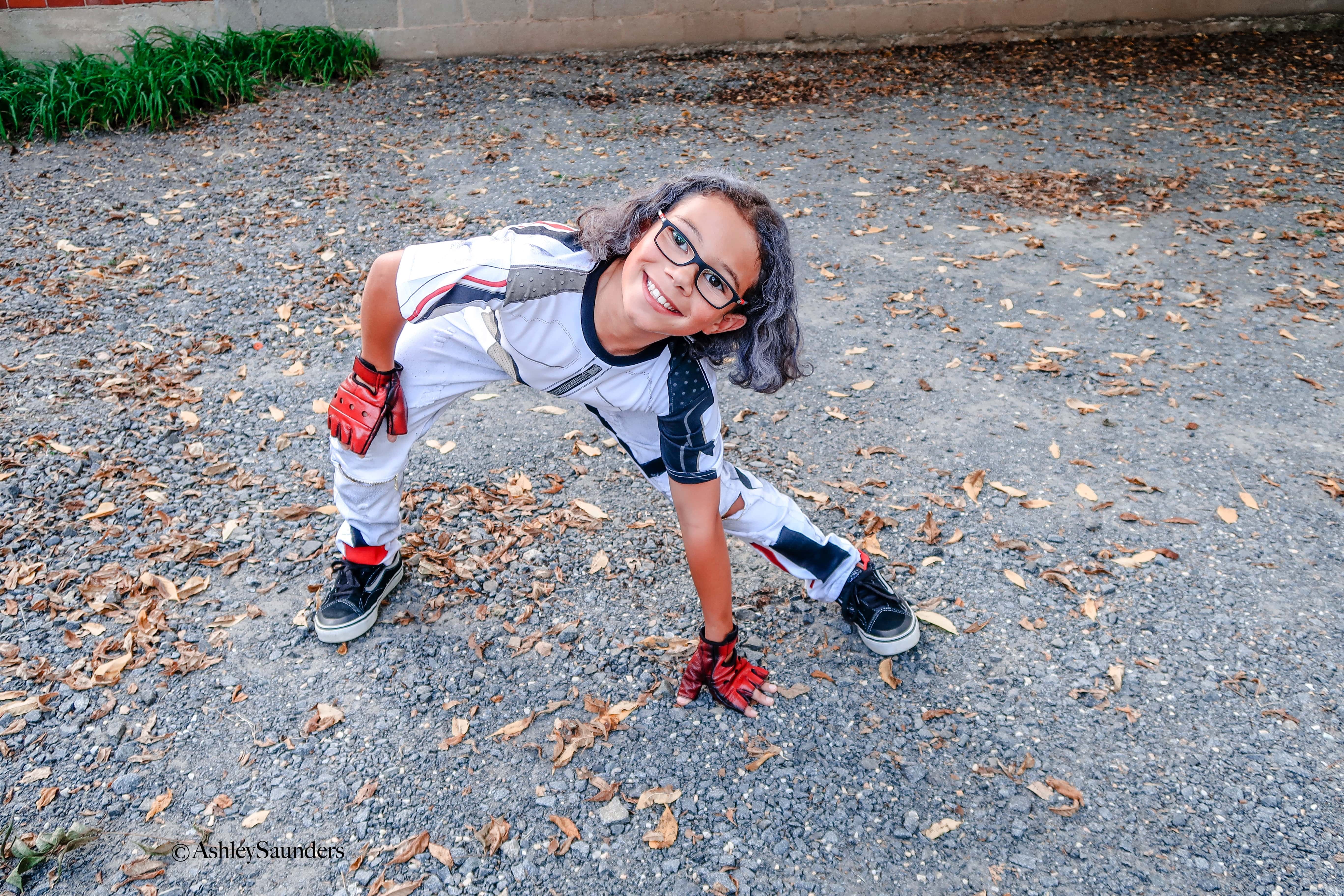 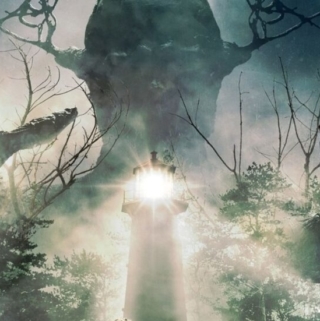