This week's episode of WandaVision was absolutely heartbreaking. We are taken back in time to see Agatha's beginnings and then on a tour of Wanda's life. While things start to come together more questions are raised and it's going to be a wild ride as Marvel brings this show to a close next week. Oh and I told you so… again. Let's do a breakdown of “Previously On”and look at the WandaVision episode 8 Easter eggs.

Spoilers ahead if you haven't watched WandaVision episode 8. 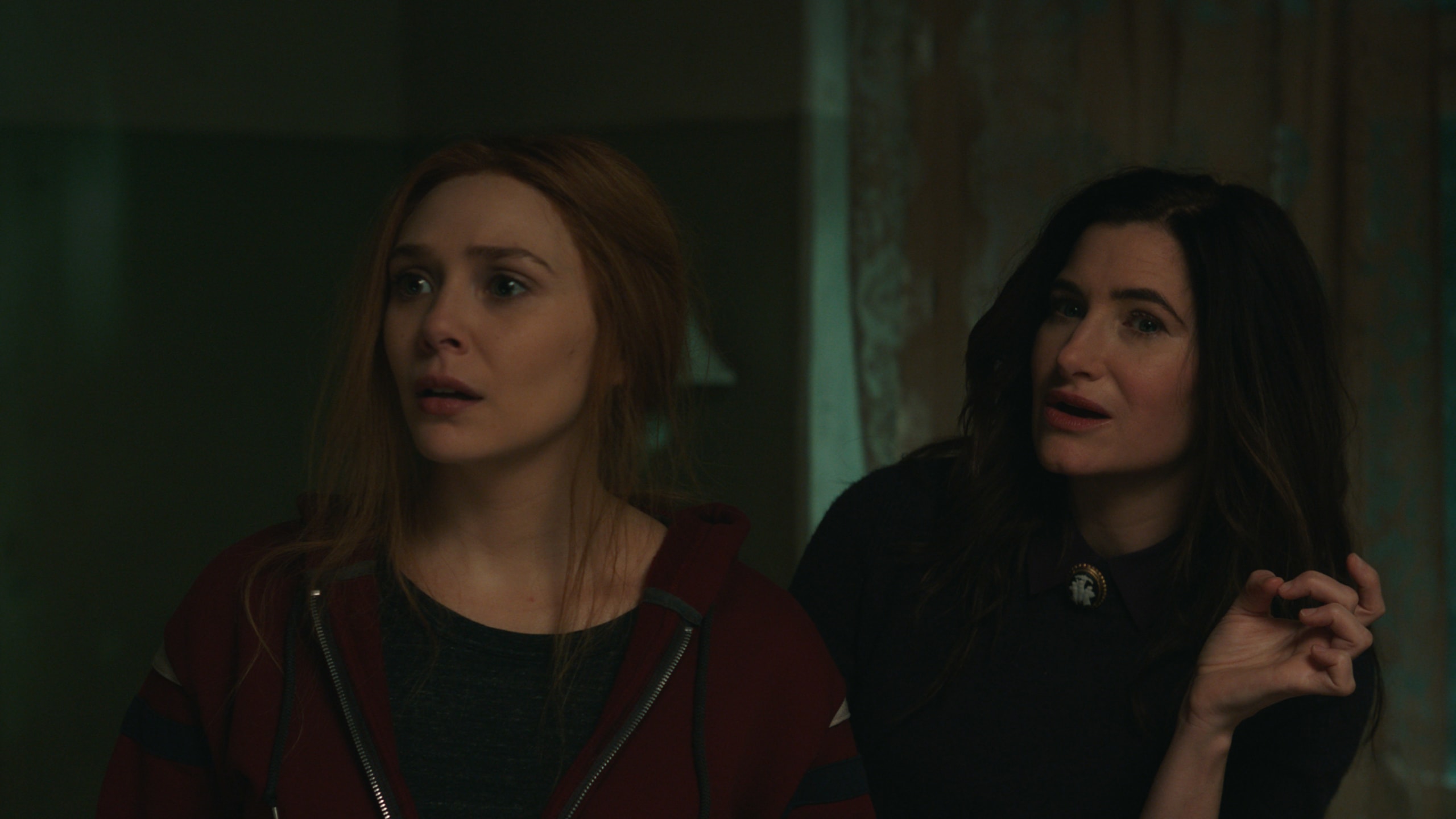 It's time for Agatha's backstory. Flashback to Salem Massachusetts 1693, during a time with the infamous Salem Witch Trials were occurring. However, Agatha isn't being accused by townspeople about her sorcery but rather her coven. They are punishing her for obtaining knowledge above her age and station. Whatever that power is (likely tied to the Darkhold) sucks the life out of all the witches present including her mother. Agatha's brooch belonged to her mother.

In the basement Agatha presses Wanda about how she can use magic but not know anything about basic spells. She even remarks how Wanda's accent comes and goes. We have seen in previous episodes her thicker Sokovian accent comes out when she is upset.

Agatha has nulled Wanda's powers in her basement using runes that only allow Agatha to use her power. She also confirms Pietro or Fietro was brought to life using Crystalline Possession because necromancy is a no go when the body is in another country.

She continues to push Wanda on her spell knowledge showing off some of her powers including transmutation and mind control. When Wanda still can't give Agatha the answer she wants as to how she is able to control and create everything going on in Westview, she decides a morbid trip down memory lane will jog Wanda's memory.

These reruns are from Wanda's life not from WandaVision. And it all starts at that small apartment in Sokovia on the last night Wanda saw her parents alive.

Wanda's father has a suitcase full of sitcom dvd which are clearly the inspiration for the several decades worth of television we have seen in the show. Her favorite however is the Dick Van Dyke Show, which is where it all began back in episode 1. 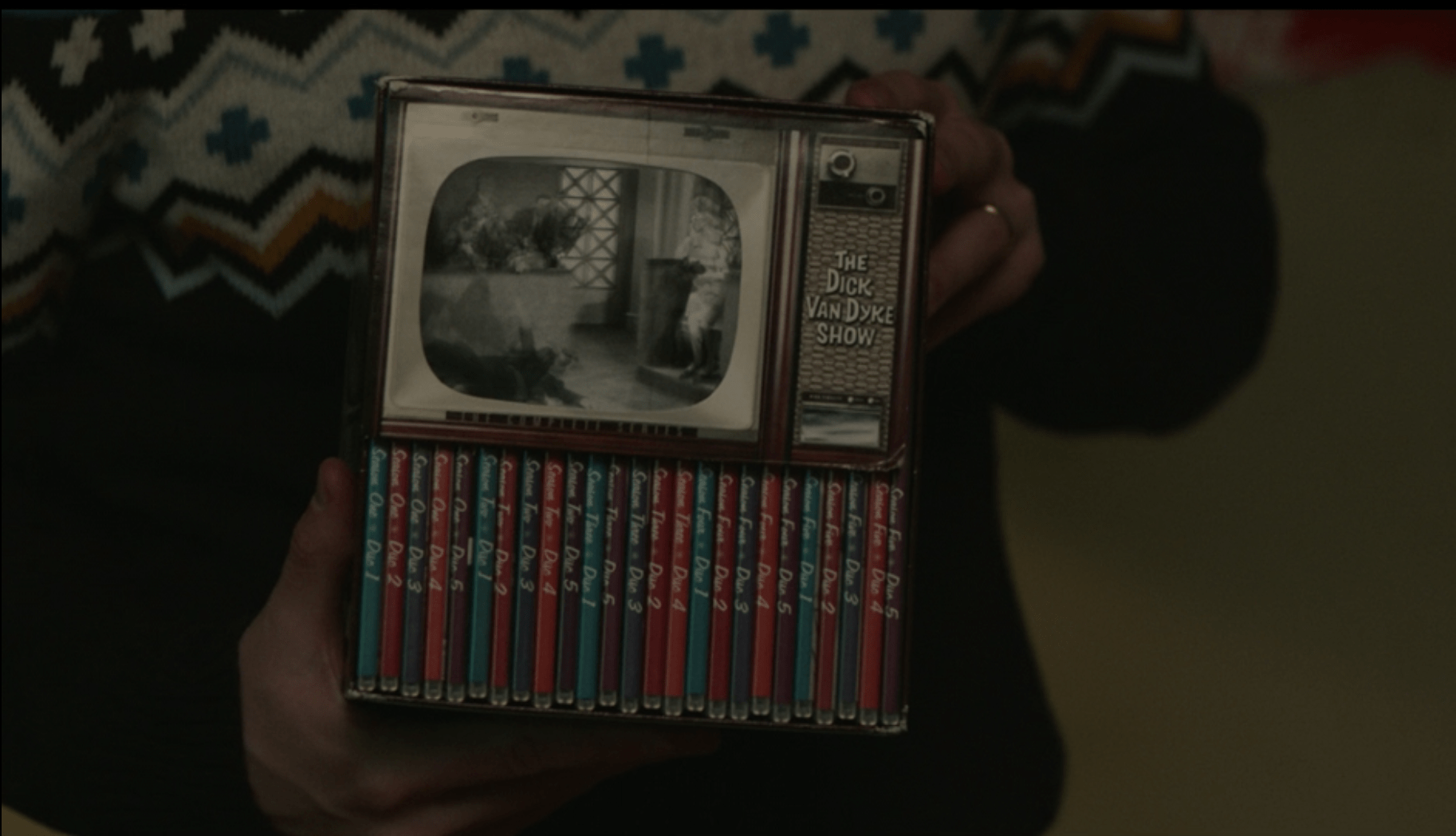 Her favorite episode is Season 2 Episode 21 The Walnut where the characters get into some shenanigans and even though things seem bad they wake up to learn none of it was real.

The Stark Industries bomb rocks the apartment, killing her parents. The same beeping from the Stark Toaster commercial is heard here. Confirming the commercials are related to her trauma and memories.

As we know, the bomb never detonates because they thought it was a dud. Turns out, Wanda had powers before but didn't know how to use them. She was able to stop the bomb from going off until they were saved.

Next is the Hydra Facility where Wanda encounters Loki's Scepter that contains the Mind Stone. When she enters the room with the stone, it floats to her and as she touches the gem encasing it it explodes, revealing the Mind Stone and a vision of her as The Scarlet Witch.

Someone with dormant powers until the Mind Stone came along huh… someone like a MUTANT maybe? 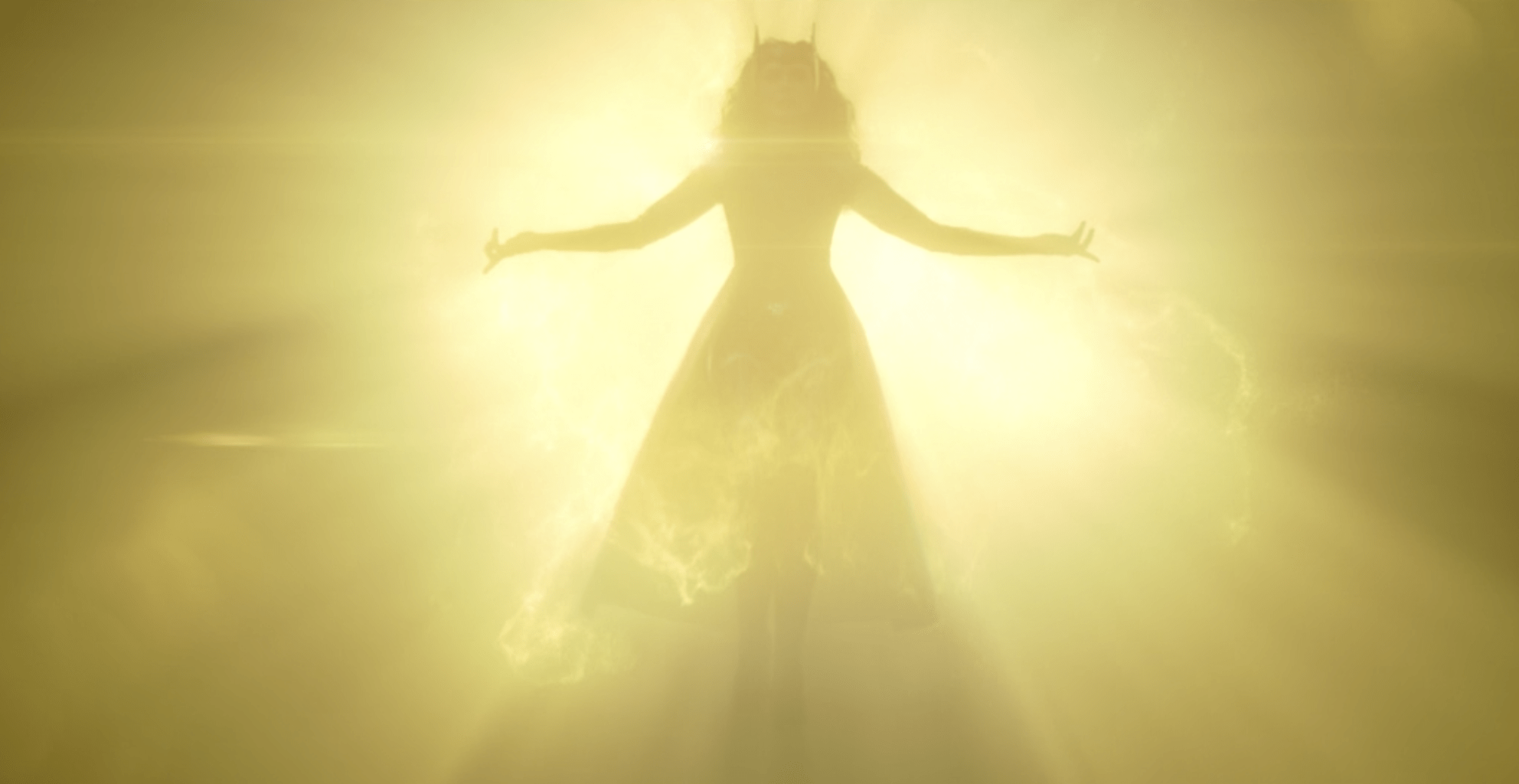 As she watches The Brady Bunch, the Hydra scientists try to figure out what happened to her in the room, but the mind stone kept their cameras from picking up any footage.

Then we find Wanda alone in her room at the Avengers Compound. Vision comes in to speak with her in an emotional scene. We see them start to form that bond, she attempts to talk about her grief as he encourages her to not dwell in the darkness of her feelings. She teaches him why sitcoms are funny, the one she is watching is Malcolm in the Middle. 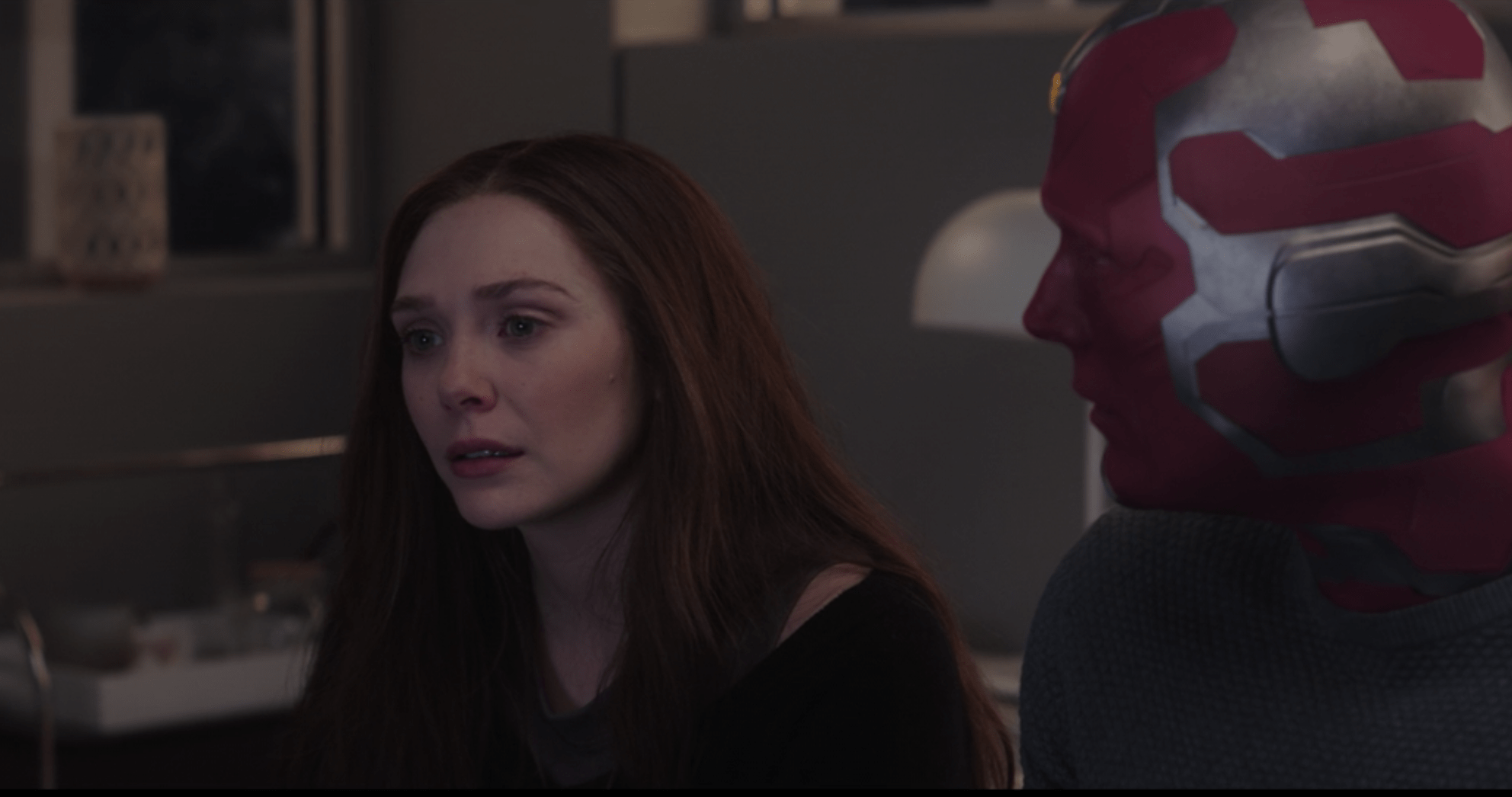 This scene shows how and why in Captain America Civil War, Vision became distracted by Wanda on the battlefield. He was already becoming more like a human and less like an android.

Agatha continues to push her saying everyone is dead and you wanted Vision back. Wanda takes us to the SWORD facility where we find out what really happened the day she went to see Hayward.

As stated before, Hayward is a liar and that footage he shared with Monica, Darcy, and Woo was 100% doctored. Wanda went to SWORD to recover Vision's body for burial. She told Hayward she had no intention of bringing him back to life, “I can't do that.”

In another emotional wrecking scene she says goodbye to Vision, using her powers she sobs “I can't feel you.” Not only is it the crushing counterpart to “I just feel you” it's important to remember for later. 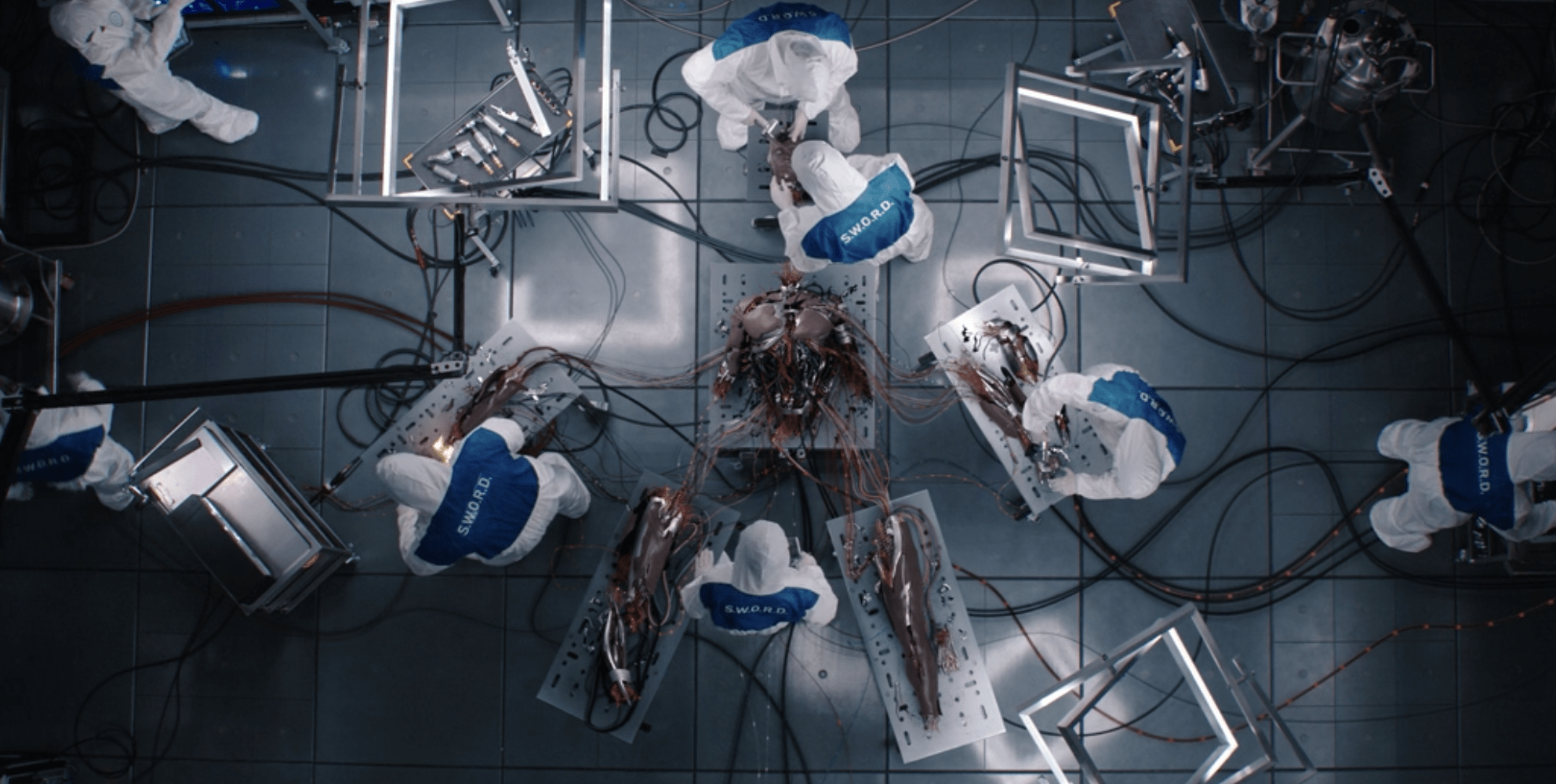 Wanda left, leaving Vision's body behind since Hayward refused to let her put 3 billion in vibranium in the ground. Jerk.

She glances at an envelope on the passenger seat before driving to Westview New Jersey. It's a normal enough town and we see shots of several characters from WandaVision before the hex took over including Herb, Mrs. Hart, the mailman, and Phil.

In the most heartbreaking scene of the entire series, Wanda drives to the home Vision purchased for them to grow old in together. After so much war and lost, she was finally going to get her happily ever after until it was taken from her. And that line “you took everything from me” in Avengers Endgame means a lot more. 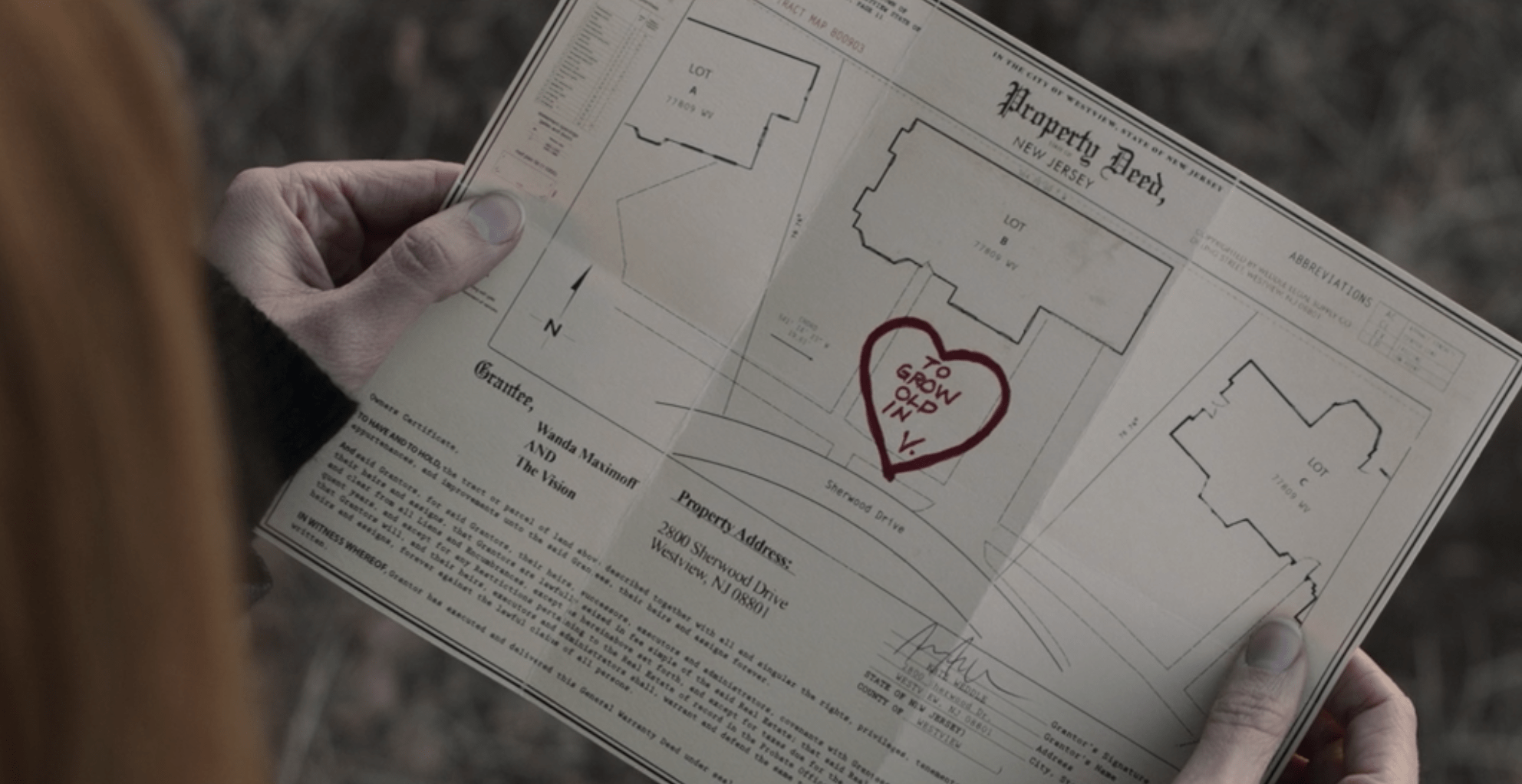 Standing in the middle of the foundation her grief overwhelms her and her power explodes, covering the town and creating the hex.

It's not just the town she reimagines, but coming out of her body is power that is rebuilding Vision complete with the Mind Stone or at least some version of it. He is as we have seen his own being, capable of thinking beyond what Wanda “wants” him to. This is also why Vision cannot leave the hex.

Agatha applauds her, finally figuring out who/what exactly Wanda is and while she holds Wanda's children hostage she reveals the fact to Wanda herself. Wanda created everything with Chaos Magic which makes her The Scarlet Witch.

Pointing out this is chaos magic relates to at least one of Wanda's  comic book backstories in which she is a mutant who later learned to harness chaos magic. However here it seems that there is something more to that. “The Scarlet Witch” is more like a god-like being, someone of legend. Scroll back up to see the vision she saw in the Mind Stone when she first encountered it in the Hydra Facility- a god-like being.

Also in the comics she is an omega-level mutant which are mutants whose dominant power is deemed to register, or reach, an undefinable upper limit of that power's specific classification aka god-like.

At the SWORD encampment outside of Westview Hayward is informed they are ready to launch, but not on Westview, not yet anyways but rather they are ready to bring Vision's body back online. Using the power from the drone they sent into Westview they can finally bring Vision back online as a sentient weapon. As I mentioned last week, this was Hayward's goal all along. And unlike Wanda's Vision, this one doesn't have the Mind Stone or likely many semblance of good. This reanimated Vision will be more like his original purpose-Ultron and I wouldn't be surprised if he sounds like James Spader when he speaks next week.