In Marvel's What If episode 9, the threat of Ultron is so dire that The Watcher turns to Doctor Strange for help and in doing so breaks his oath to never intervene. Avengers err Guardians assemble! Let's get into “What If… The Watcher Broke His Oath?” with this What if episode 9 easter eggs and breakdown.

This is your spoiler warning if you haven't watched episode 9 of What If.

What If Episode 9 Easter Eggs & Breakdown

Peggy Carter is headed to The Lemurian Star to rescue the ship after being attacked by pirates, let by Batroc. Black Widow is with her, along with Rumlow and STRIKE team. This is part of the opening sequence of Captain America The Winter Soldier.

Just like in CATWS, Natasha is trying to help Cap find a date. She suggests Bernard from accounting. Bernard is the name of Jeffrey Wright's character in Westworld. Peggy refuses and jumps from the plane. (Thanks to reader Andy for catching this one!)

Her fight with Batroc and his men is interrupted by The Watcher. He is there to assemble is own Avengers.

The Watcher calls Peggy the soldier lost in time, something Ultron called Steve. He tells her she has been chosen.

Then as Ego is using his son Peter to become more powerful, T'Challa aka Star-Lord saves Peter and takes out Ego. The Watcher appears to recruit T'Challa to his team.

In the next scene, Tony Stark in a modified Hulkbuster Suit along with Gamora (dressed like Thanos) are on Nidavellir waiting for Uru to complete making the Infinity Gauntlet. Tony seems determined on placing a suit of armor around the galaxy. The Watcher appears to tell them that Gamora has been chosen. He also reveals Gamora survived Sakaar and defeated Thanos.

Over in Wakanda, Shuri and Pepper are closing in on Killmonger. However, The Watcher recruits him for his team.

As Thor is battling Ultron's robots, The Watcher takes him (screaming) to where the other chosen await.

This pub is a familiar place to Peggy. She sees Steve Roger's photo on the wall. The facade was Doctor Strange's (Strange Supreme) idea. 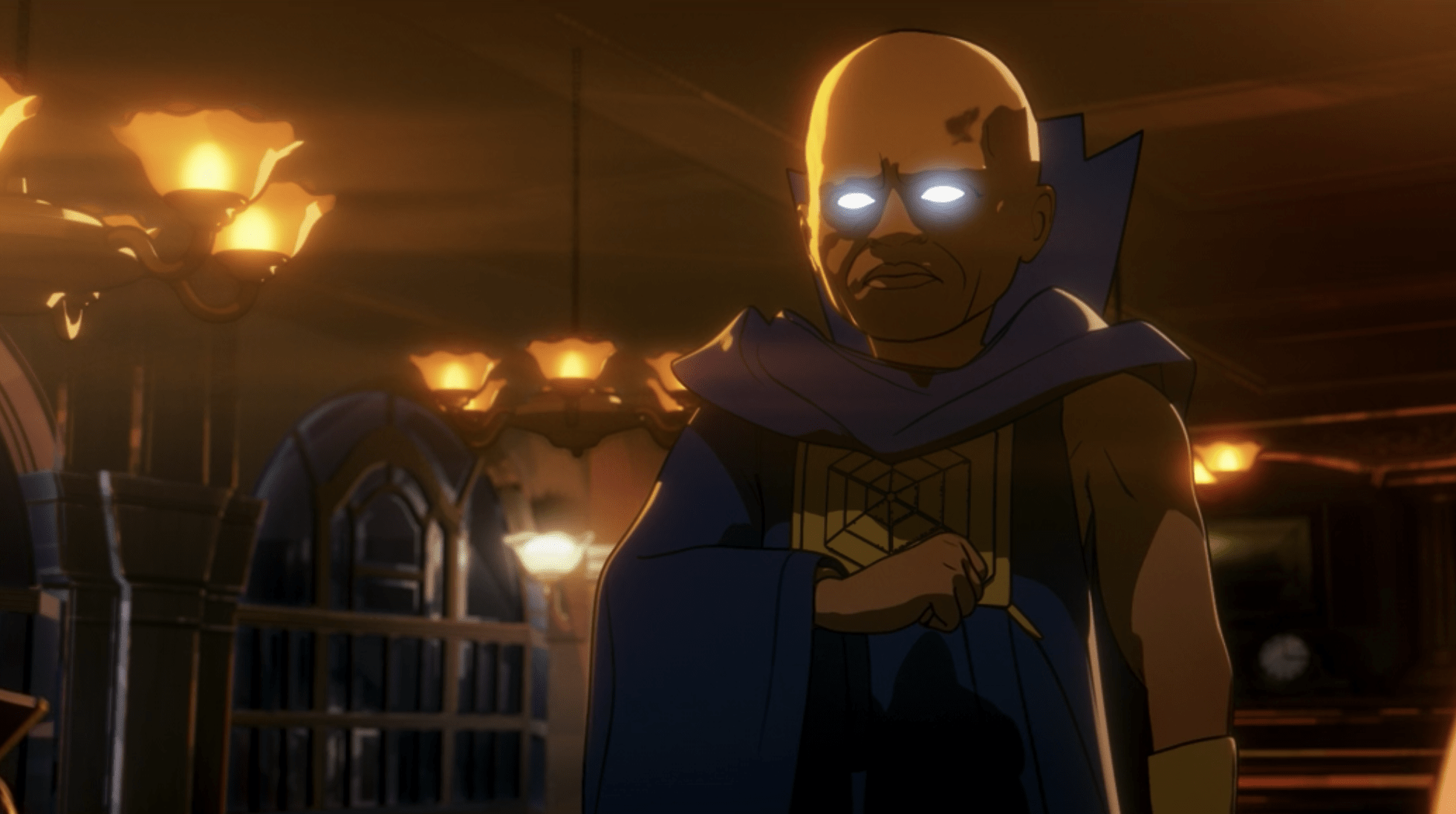 This new team is called The Guardians of the Multiverse. The Watcher explains what and who they are up against- Ultron who has been elevated to cosmic being status thanks to the Infinity Stones and his synthetic body. The plan is to separate his body from the Stones.

Gamora reveals the Infinity Crusher, designed to destroy the Infinity Stones. After a dinner of Chinese food (yum), they travel to a planet that won't attract Ultron's attention until they want it.

Doctor Strange tells Peggy in his universe Steve Rogers took the serum while Gamora eyes Killmonger because she doesn't trust him. Smart.

During the toast to their team, Thor attracts the attention of Ultron and the fight begins.

Strange gives them all a protection spell. It seems similar to the one Wong gave Strange in the past. Killmonger and Gamora leave through an opening The Watcher created while the rest face Ultron.

Using the spell Images of Ikonn, Strange duplicates Mjolnir. While Ultron is busy fighting hammers, T'Challa and Peggy attempt to fight him and retrieve the Soul Stone. Peggy provides enough of a distraction for T'Challa to steal the Soul Stone.

Strange brings in the Zombies to keep him busy. And by bringing the Zombies, he also brought Wanda with them.

Black Widow from Episode 8 appears. Peggy convinces Natasha they are on the same side right before Ultron appears.

It seems like they won but they didn't. The camera spins around the heroes like in The Avengers. Unfortunately, the Infinity Crusher doesn't work because it was designed to destroy the stones in Gamora's universe, not this one.

Black Widow has a plan; she only needs Captain Carter to get her an opening to upload Zola's virus into Ultron.

Zola's programming destroys Ultron from the inside.

Then in a move The Watcher should've seen coming, Killmonger betrays them and takes the stones. The other heroes refuse to join his side.

Zola in Vision's body rises to take the stones back. Strange figures out that they weren't meant to win but only to separate the stones from the body. He sacrifices himself to trap Killmonger and Zola in a universe, within his universe that he created around himself when he destroyed everything else.

The Watcher returns each hero back to their universes at the exact moment they left. Peggy wishes for a different timeline but The Watcher says she is needed in her own. Black Widow remains, mad that The Watcher basically eats popcorn while they all suffer. She refuses to walk through the door.

He tells her the door was only a metaphor. The scene changes and they are aboard a SHIELD helicarrier. She sees Captain America and Captain Marvel fighting Loki and his army. Natasha saves Fury from Loki and joins this timeline that is missing its Widow.

As The Watcher brings the story to an end, T'Challa is with Peter Quill, Gamora has gone back to her world to help Tony Stark, and Thor reunites with Jane. The Watcher vows to protect the multiverse to the very end.

In the post credit scene of What If episode 9, Peggy returns to her world, and Natasha reveals what the pirates were after onboard the Lemurian Star: The HYDRA Stomper and there is someone inside.

All episodes of Marvel's What If  are now streaming on Disney+.