Eternals is here and it brings with it new characters and stories that have big implications for Marvel's Phase 4 and beyond. It is visually stunning with cast chemistry that rivals the Avengers. As usual they sprinkled in plenty of Easter eggs, but what excited me the most was a cameo of a future hero that was a blink and you miss it kind of moment. Here are all the Eternals Easter eggs and cameos you may have missed.

This is your spoiler warning if you haven't watched Eternals.

Due to the Eternals being one of those comics that the average MCU fan has not read or ever heard of, they give a quick In The Beginning breakdown of who they are and where they came from. They hail from Olympia and were created by the Celestials in order to hunt the Deviants.

Arishem The Judge is one of the main Celestials with the powers to judge if a planet's civilization should live or die. In the film he is the creator of the Eternals and as noted at the end, still is intent on fulfilling that judge role.

Sersi (Gemma Chan) stands next to Ikaris and looks out on their future home of Earth. She says: “It's beautiful, isn't it?” Chan plays Minn-Erva in Captain Marvel, and her feelings about Earth are very different. She says “It's a real shi*hole!”

In front of the museum, there is an advertisement for a new exhibit featuring the knife Sersi gave the people of Earth when the Eternals first came. Also on that billboard is an ad for the Global Repatriation Council (GRC). This is the foundation that was introduced in Falcon and The Winter Soldier.

Dane Whitman asks Sersi if she is a wizard like Doctor Strange. He has noticed that strange things happen around them and Sprite has let a few things slip.

Sersi surprises Dane with a ring of his family crest. Look closely, it is the same symbol as his comic book outfit.

RELATED: Eternals Review: A Unique MCU Entry With Lofty Plans For The Future

The Eternal's ship is called the Domo. This is a nod to Domo, an Eternal who uses a highly advanced hoverchair.

There is a mention of other Eternals across the galaxy. In the comics there are various generations of Eternals. The MCU has already met at least one…Thanos.

Thena suffers from Mad Weary or technically Mahd Wy’ry. In Avengers #361, Sersi is the one who comes down with Mahd Wy'ry, the secret curse of the Eternals. It is essentially dementia for an Eternal. Although their bodies are immortal, their minds however remain very human. When you live as long as they do, as Ikaris asks in the comics “How much living before the weight of years proved too much and crushed the soul? How long before the mind wearies of living and can do it no more?”

Thena repeatedly discusses the demise of Centuri-Six. In Thor #258, Centuri-Six is a planet that was raided by the criminal Grey Gargoyle.

When Kingo introduces his valet, he mentions that the man thought he was a vampire. With Blade coming, this is another MCU nod to vampires to confirm they have been here all along.

The first of two DC Comic references, they ask if Kingo's valet is like Batman's butler Alfred.

On Kingo's plane is a replica of Captain America's first shield.

Also on the plane, the movie playing behind Ikaris' head is The Empire Strikes Back. The scene is the infamous I Love You, I Know. Also, this isn't the first time Star Wars has been referenced in a Marvel Movie.

Also on the plane are the posters for his various movies about the “Shadow Warrior.” In the comics, there is a group called the Shadow Warriors who were created to help stop the X-Men character Apocalypse.

As they sit around the table in the home of Gilgamesh and Thena, Kingo tells them that Thor followed him around in the past but now won't return his calls.

In the film it is revealed that the Eternals are not humanoids experimented on by the Celestials to become immortal but are actually synthetic beings created in the World Forge.

The shot of the Amazon River is the same from Disney's Jungle Cruise.

At Phastos' house his son Jack, named after Jack Kirby the creator of the Eternals, calls Ikaris Superman.

On the table is a Star Wars coloring book. 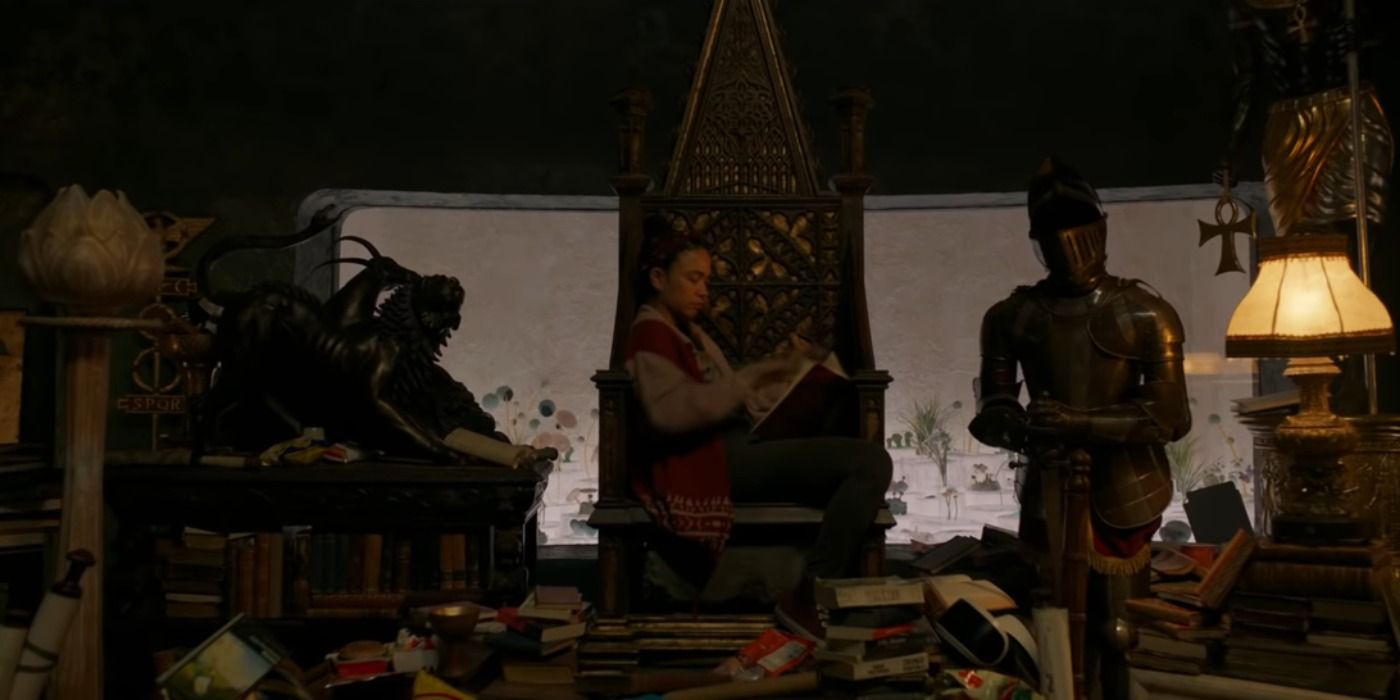 When Thena picks up a sword in Makkari's room on the Domo, they ask if it's the Ebony Blade. No, it's Excalibur. The Ebony Blade is the weapon of the Black Knight aka Dane Whitman.

Also in her room there are Twinkies, The Emerald Tablet, Dinosaur skulls.

Makkari is wearing a H.G. Wells shirt featuring The War of the Worlds.

They are looking for where Tiamut will emerge in order to stop the destruction of Earth. Tiamut the Communicator or the Dreaming Celestial is feared by both Galactus and Uatu the Watcher in the comics. It's a good thing they didn't wake this guy up right?

Thanos' Snap delayed the Emergence of Tiamut by 5 years.

In order to stop Tiamut from rising, Phastos suggests they form a Uni-Mind. Kingo says Brainstorm would be a better name, but Uni-Mind is the comic book name for it. The Uni-Mind is when Eternals join their powers and intelligence together to become one powerful entity

Thena, Druig, and Makkari leave to find other Eternals and let them know the truth of their existence.

Phastos, Sersi, and Kingo remain on Earth. Dane begins to tell Sersi about his complicated family history when Arishem takes her and the others away, vowing to spare Earth only if their memories judge the planet worthy.

In the first post credit scene in Eternals, the Domo receives unexpected visitors. Pip the Troll voiced by Patton Oswalt and Eros aka Starfox, aka Thanos' brother played by none other than Harry Styles. He is a fellow Eternal and is stopping by to help Thena, Druig, and Makkari get their friends back from Arishem.

While most people have been buzzing about Harry Styles joining the MCU, it was the second Eternals post credit scene that gave me goosebumps. In it, Dane, furious that Sersi has been taken opens up a case holding the Ebony Blade. The words Death is My Reward is carved in Latin on the case. 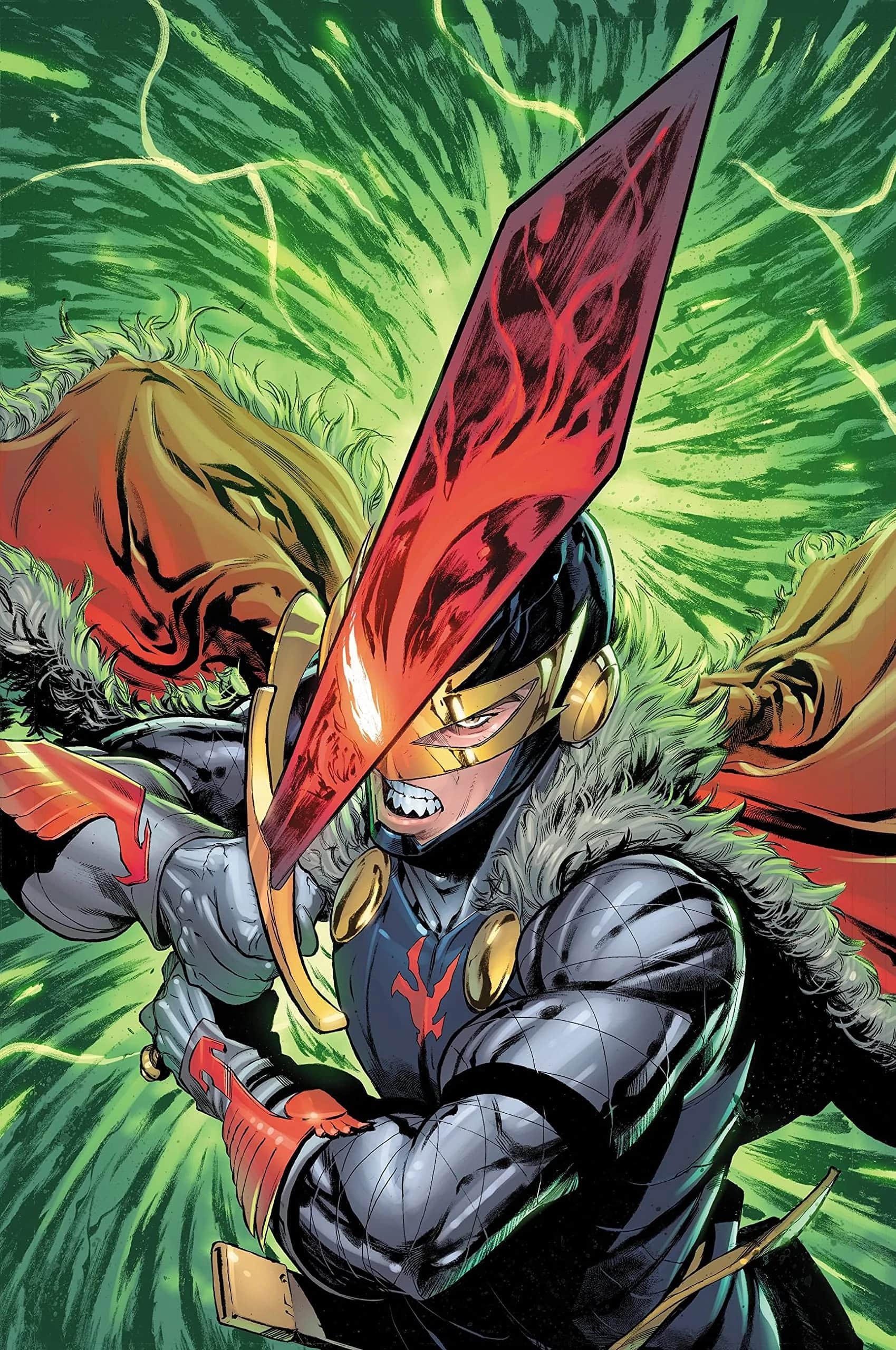 In the comics, the Ebony Blade is a cursed sword, crafted by the wizard Merlin. Unlike Thor's Mjolnir who seeks those who are worthy to wield it, the Ebony Blade “lightens only in shadow.” That means it responds to the darkness within the bearer's heart. Throughout the comics it pushes Dane into a powerful bloodlust and rage that is often uncontrollable.

Just as Dane is about to touch the blade a voice is heard saying “Are you sure you’re ready for that, Mr. Whitman?” The voice that stops Dane belongs to Mahershala Ali, as in the star of the upcoming MCU film Blade.

Why would Blade show up to stop Dane? Well, In the MI-13 series Blade joins a team that includes the Black Knight. In this comic run it is also revealed the true Ebony Blade was hidden in Wakanda while the fake one was created by Dracula. Maybe Blade is here to recruit Dane to join a supernatural good guy team or he just happened to be hanging out in London and wanted to stop by and keep Dane from turning to the dark side. Either way, I'm excited to see where this leads in the future.

Eternals is in theaters now!