Spoilers ahead if you have not watched The Book of Boba Fett episode 7.

Boba and Fennec are standing in the ruins of The Sanctuary. Boba says “We are at war.”

Mando arrives to tell them about the reinforcements coming from Freetown, led by Cobb Vanth. He doesn't know what happened with Cad Bane during the last episode. He also agrees that the Spice Trade needs to be shut down.

Boba thinks they should lockdown at the palace while they wait for Vanth and his people. The Mod Crew thinks it would be better to stay at The Sanctuary and protect the people of Mos Espa. Boba agrees.

Cad Bane walks past some Jawas who know enough about him to be scared and meets with the Pyke Leader and Mok Shaiz. The Pyke Leader admits the Pykes destroyed the Tusken Raider camp, even Cad Bane seems disgusted by their actions.

They know Fett is staying in The Sanctuary, Bane has a plan to lure him out.

Luke's X-Wing lands at Peli Motto's with R2-D2 and Grogu. Underneath his robe, Grogu is wearing the Beskar armor.

R2 tells Motto Grogu's real name, she (like most of the fandom) says she's not going to call him that. Baby Yoda for the win! Okay she doesn't call him Baby Yoda but we all know that's what they mean.

Fennec goes over where their forces are located as they keep an eye out for the Pykes.

Cad Bane and Boba Fett face each other in the streets of Mos Espa. Bane reveals The Pykes killed the Tuskens and challenges Boba to a duel. Fennec advises him against it since he is now emotional. She promises he will have his moment. Which means we wait for a rematch from The Clone Wars.

Each of Fett's people are attacked. It was a trap. All of the families that negotiated neutrality with Boba have turned on him.

The Gamorreans are killed first. Krrsantan is taken down next by the Trandoshans. Fennec leaves Fett and Mando to take out the Pyke leadership. She saves the Mod Crew before they can be overrun.

The Pykes surround The Sanctuary. The Mandalorian and Boba Fett discuss a plan to attack them before they can finish getting into position.

Majordomo speaks up and offers to meet with The Pykes and negotiate on their behalf. He name drops being educated on Coruscant.

While he speaks to The Pykes, Boba and Mando get into position. Using their jetpacks they surprise the Pykes. It's a massive shootout, and despite their best efforts are they overwhelmed. Boba uses his knee pad rocket dart launcher and Mando his stingers.

The People of Freetown show up and help save them. Mando is told that Marshal was gunned down by Bane. The Mods show up and Krrsantan to help as well. Fett and Mando save Krrsantan with the former offering him a soak in the Bacta Tank when this is over.

The Pykes retreat but are replaced by Scorpenek Annihilator droids. These droids are based on concept art for Attack of the Clones. They resemble the familiar Destroyer Droids aka the Droideka.

Even the Darksaber doesn't work against these droids. Boba leaves for more reinforcements while Mando stays to protect the others.

Motto shows up to say she has a surprise for Mando. They quickly retreat. Motto reveals the surprise and Baby Yoda leaps into Mando's arms. 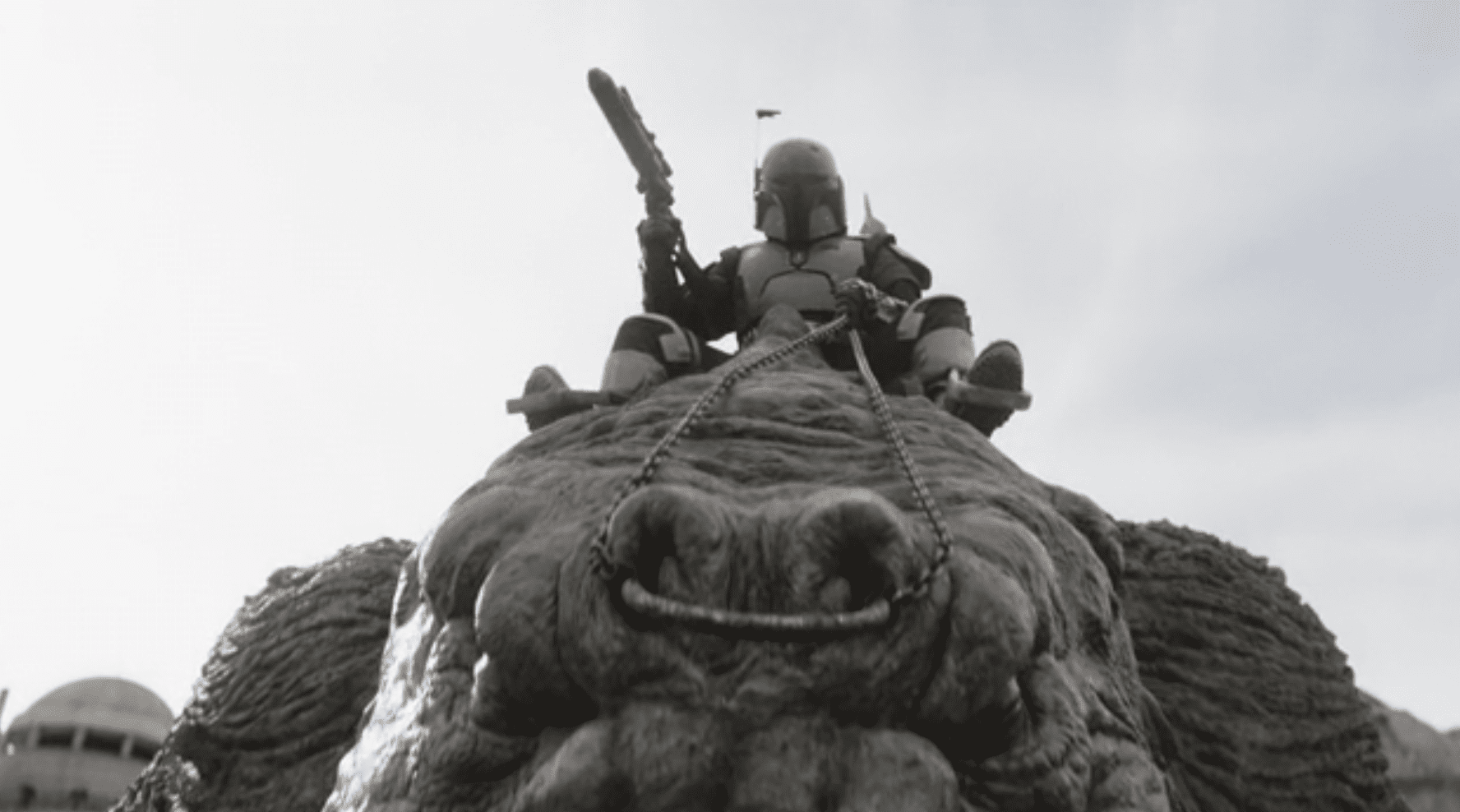 Boba shows up with his reinforcements. Boba Fett is riding the Rancor! The Rancor is able to weaken its defenses and Mando attacks with the Darksaber. He is still almost overwhelmed but Grogu saves him. 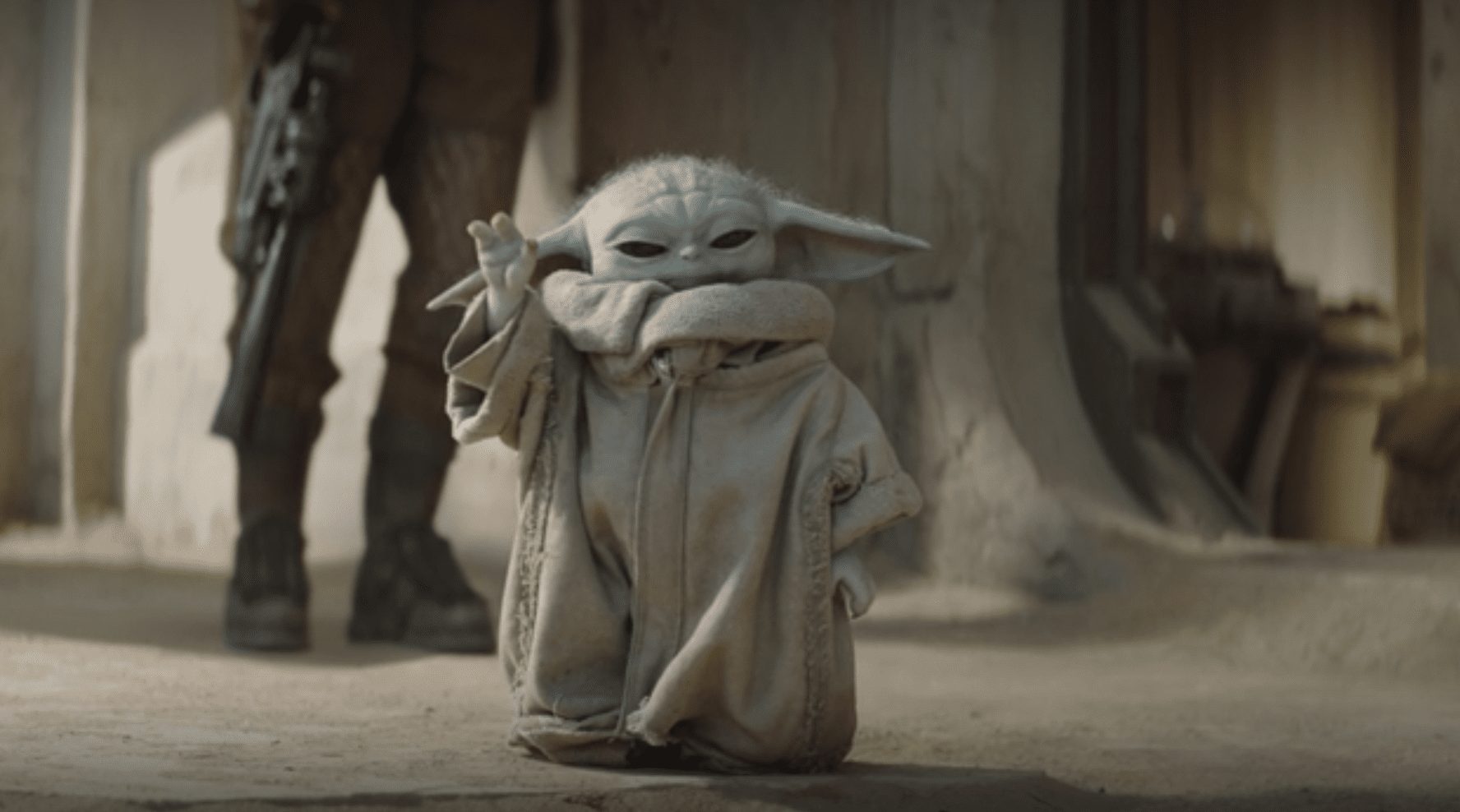 Fett and the Rancor then go to save the Mods and the people of Freetown. The Rancor scares the Pykes and they start to run. When one of the Pykes is thrown the famous Wilhelm Scream can be heard.

Unfortunately Cad Bane is not afraid and he manages to get Boba off the Rancor for a showdown.

Cad Bane questions why Boba is turning on his old ways. They duel, Bane mocks him, about his father, and the last time he beat him on a job- the deleted scene from The Clone Wars that showed why Boba Fett's helmet has a dent in it.

The Rancor is on the loose and is destroying the town. Mando attempts to stop him, but first gives Grogu the shifter knob he likes to play with. Grogu saves Mando again by putting the Rancor to sleep. He then lays down next to it.

The Pyke Leader is angry about how everything went down. Fennec shows up and takes out everyone.

Walking the streets of Mos Espa the people are bowing to Boba Fett. They are grateful.

The Mandalorian and Grogu are in space. Grogu loves the new ship. Where could he be headed? My guess is Mandalore, to make amends and start his journey towards reclaiming the planet for all of the Mandalorians.

Cobb Vanth is inside the Bacta Tank. The Mod Doctor is there getting ready to give him some sort of upgrade. Maybe The Mandalorian season 3 will reveal what parts Vanth received from the doctor.

The entire season of The Book of Boba Fett is now streaming on Disney+.