To celebrate Bambi joining the Walt Disney Signature Collection, we sat down for exclusive interviews with Peter Behn, Donnie Dunagan, and Paul Felix. Peter and Donnie were the original voice actors for young Thumper and young Bambi. Paul is a visual development artist at Walt Disney Animation Studios. 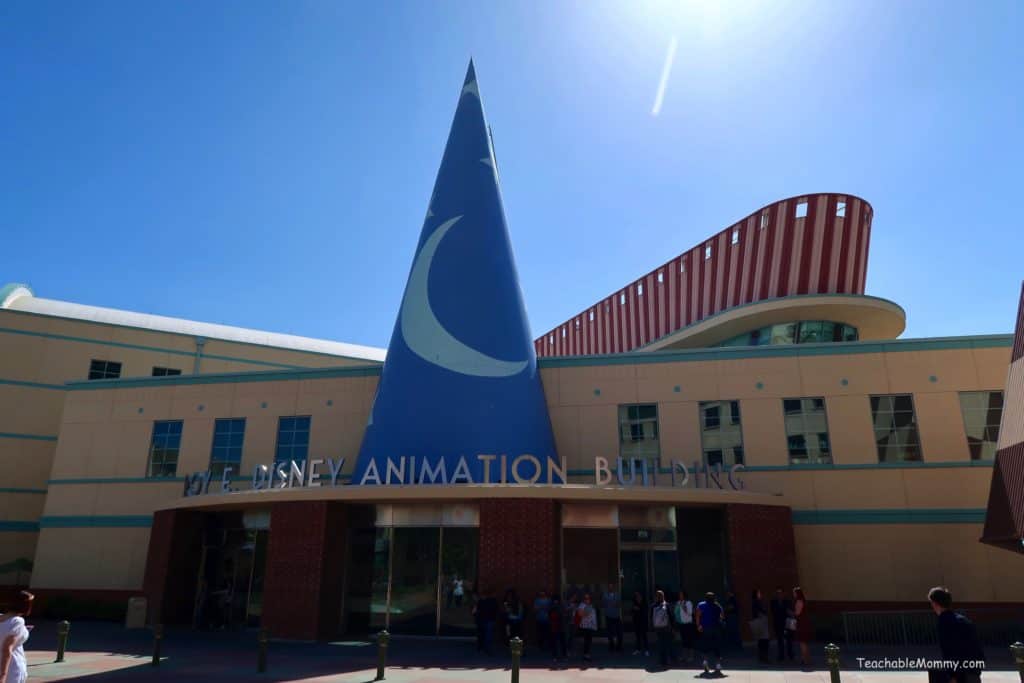 It was an honor to speak to Peter and Donnie, listening to their stories of how the business worked back in the day, about their lives, and what it was like to work with Walt Disney himself. 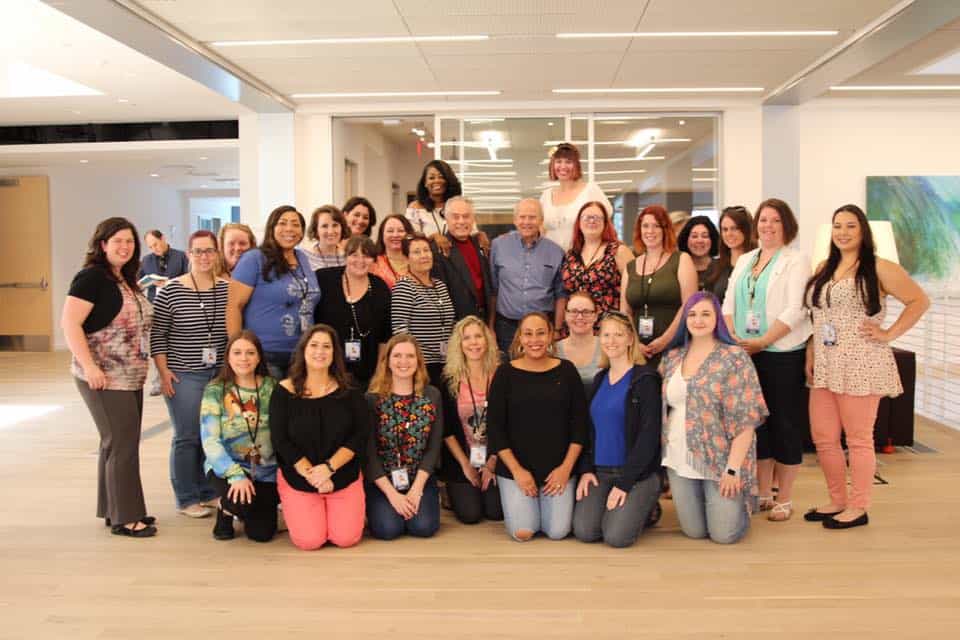 Imagine being 4 or 5 years old and getting a chance to work in a Disney film. Peter was 4 years old initially,and then the recordings took place intermittently over a two-year period. He was 5 when it was all said and done. Donnie was 5 years old and finished up at 6 1/2.

Peter on getting his part in Bambi:

And then during that time or after a little later in the 30s, he (his father, screenwriter and author, Harry Behn) knew Walt Disney.

And he heard that a new movie was about to be done. And he brought me over for the voice auditions for the part of Bambi. And Donnie beat me out on that one. Because I had the wrong voice for that part. However, later Frank Thomas and Ollie decided that my voice was right for the rabbit is the way they referred to it, as I understand it initially. I never actually ever auditioned for Thumper. 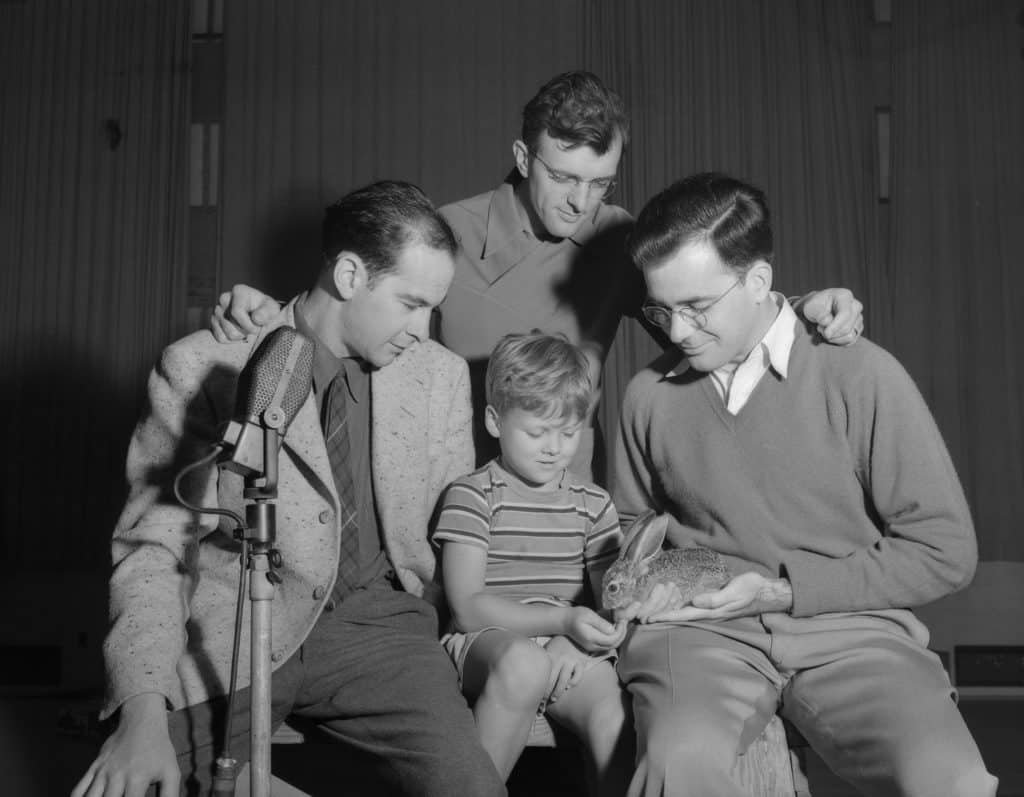 Donnie on getting into the business:

We were dirt poor. And I mean, certified dirt poor in the South.

And I’m standing there at 3 ½, 4 years old you know I’m standing behind a crowd. And it was the Depression, no phones, no radios, no money. People were there laughing about this wonderful man dancing on the corner for nickels and pennies. And I started imitating him. And I was barefoot. He had tap shoes. He’s cheating, right? And I’m barefoot. And I start dancing. Then they decided to put me in a talent contest.

And I won the darn thing which was a miracle. And I sang to a song I think called “a tisket a tasket” with a paper bag as my hat and a stick from a tree as my cane. Won the darn thing. In the audience was a wonderful man and he was a bona fide genuine talent scout in those days. About two weeks later, cut this real short. We’re in Los Angeles and I did seven movies, some of them as a costar on the marquee, if you can believe that, huh. Then Mr. Disney called my mom on our kitchen phone. 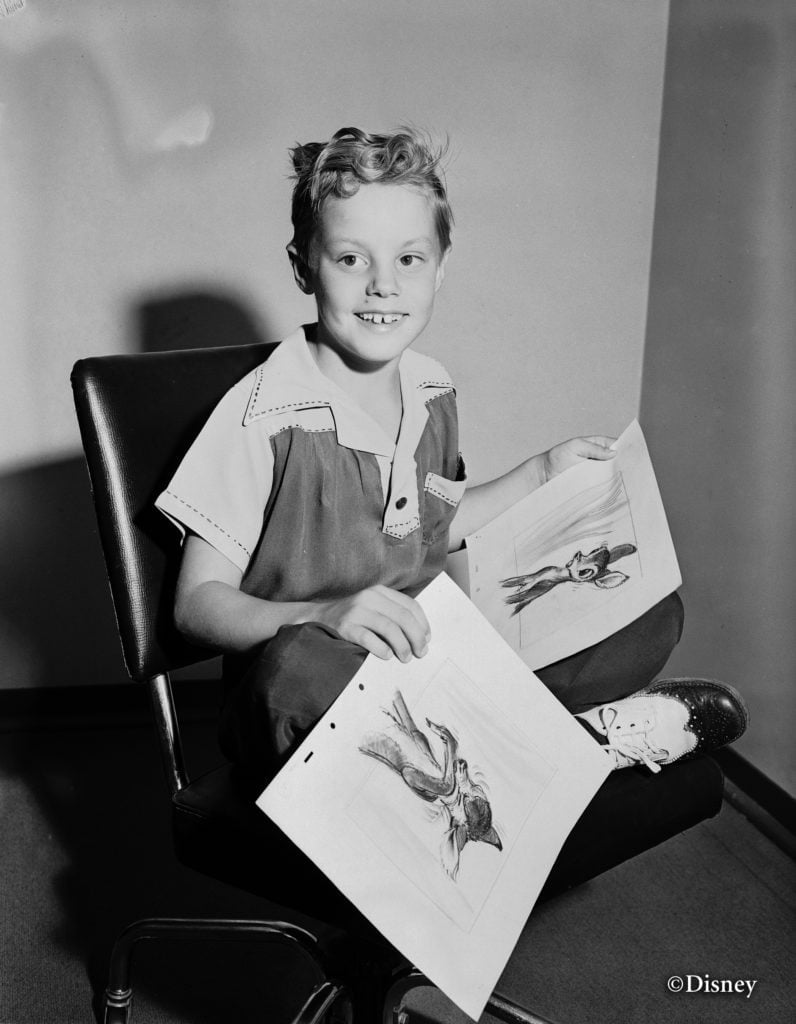 Donnie was a spitfire at a young age. This encounter with his agent might have been a foreshadowing to his days as a drill sergeant!

You’ve got to have an agent in the business in those days, right? This guy was born with a bad attitude and he was rude to my mother all the time. And I’m five years old. And he didn’t want us to do Bambi. He didn’t. “Oh, you can’t do that, that’s an animated cartoon thing. I don’t know.” Think about that one for a second. So I fired him. 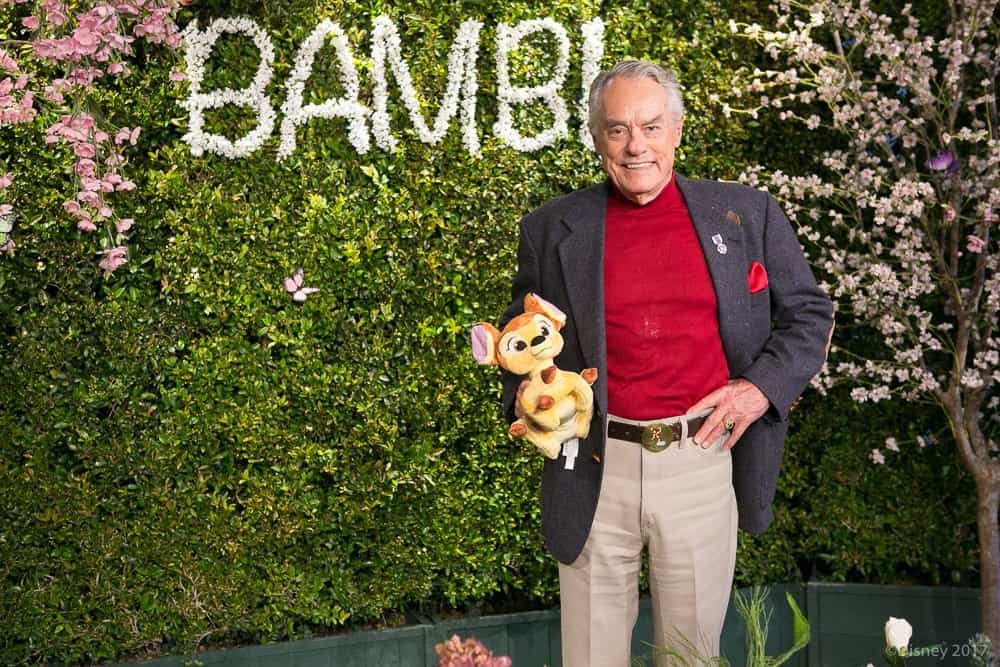 Enter the collective what?! At five?! I laughed because it definitely sounds like something my son would do!

Donnie left entertainment and facing the Korean War Draft, volunteered as a marine. He became the youngest Assistant Drill Instructor in U.S. Marine Corps history and then the youngest Senior Drill Instructor. Donnie did not go around telling everyone he was Bambi. Would you if you were in the marines?

I’d love to tell you I’m bulletproof and all this stuff, I’m not, all right. My fear was, oh my gosh, if he puts credits on these things and shows it in the base theater, right, I got all these drill instructors working for me and all this stuff, right? I could just see them, those drill instructors and captains working for me. Dear mom, guess what. My commanding officer is Bambi. 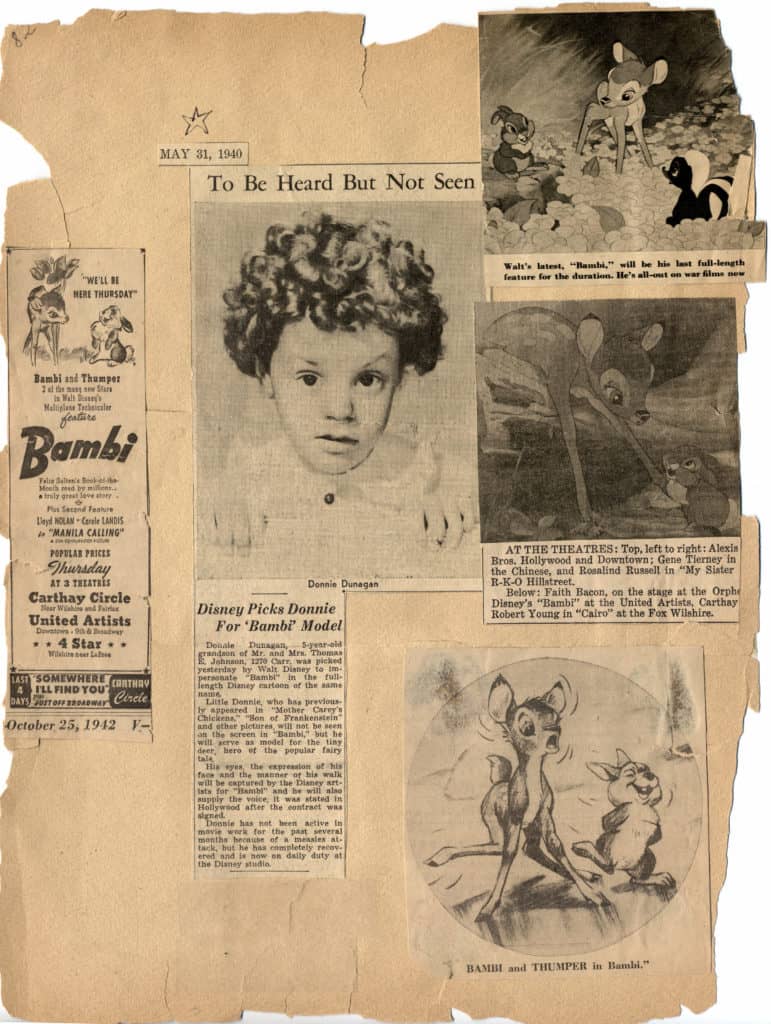 Talking with these two men was true Disney magic. These guys worked with Walt himself, I couldn't wait to hear what they could remember about him.

Peter: He was with me and showed me the little Disney zoo that they had. At one time they had deer and some rabbits and other creatures so the animators could actually see the anatomy of the animals to help them with their drawings. He was a very nice man. 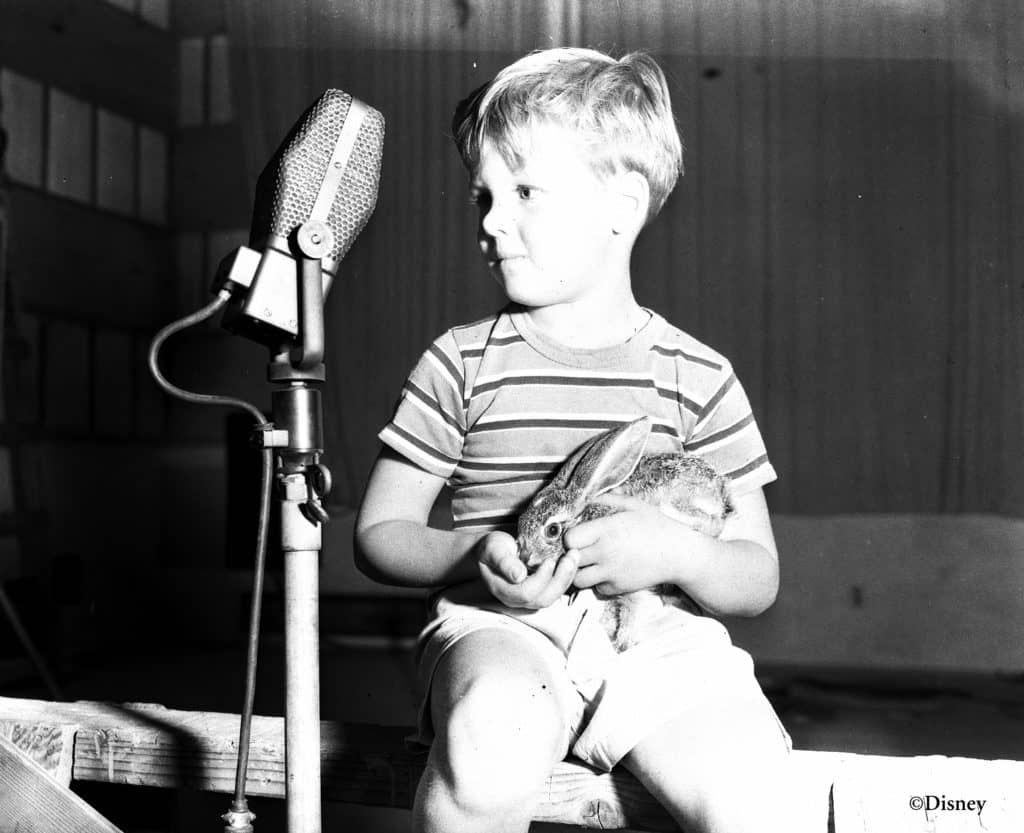 Donnie: When I first saw him I thought maybe he was going to get a broom or something. I mean, he had his sleeves rolled up and he was working and they introduced us to him. We had a great time. Most of the time I saw him, he was participating in things. He wasn’t, oh my gosh here comes the boss. He was, here comes Walt, here comes Mr. Disney, he’ll help. Ask him about this. Ask him about that. That’s called leadership. And that’s why Disney was successful. 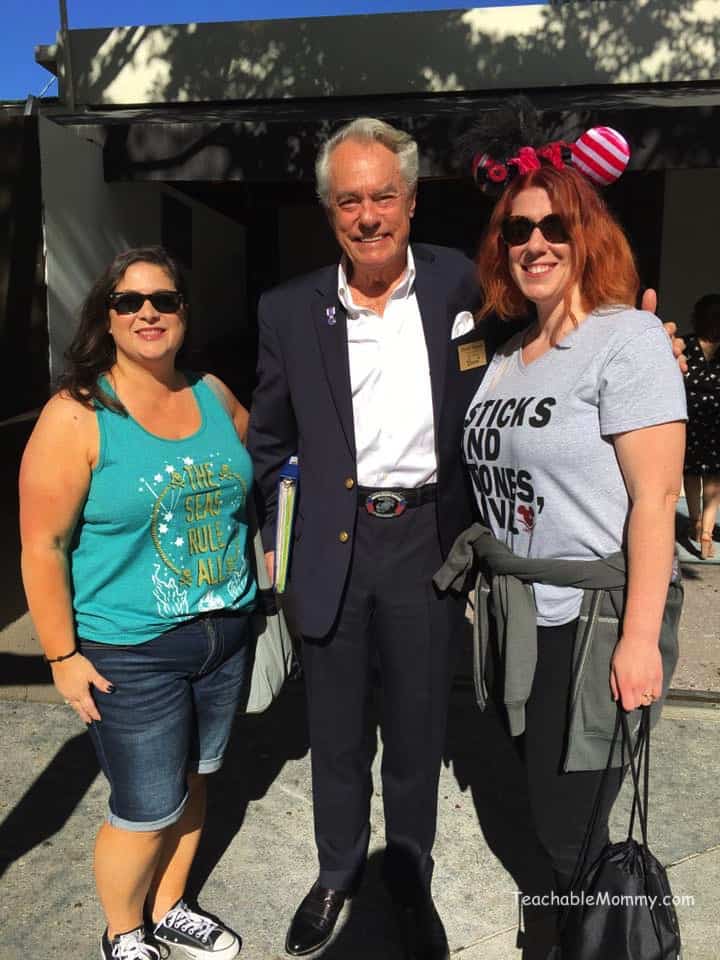 My friend, and fellow Disney nerd Dawn from IAmAMommyNerd.com ran into Donnie the next day. He regaled us with more stories about his life while we all waited for our rides. Such a sweetheart!

Bambi is celebrating its 75th anniversary this year. This film has accomplished a lot in 75 years and I think it will continue to have a lasting presence and impact on those who see it. But don't just take my word for it.

Peter: One of my strongest feelings about the movie is the amazing fact that back in the 30s, Walt Disney was so aware, far ahead of his time in the environmental concerns. I think the movie is truly a very strong statement in favor of protecting the environment and the concern that man was ruining it. It’s one of my strong beliefs that we have to do everything we can to keep it from getting worse. It’s a forward awareness and thinking that Walt obviously brought to the movie. He had to know what he was doing. 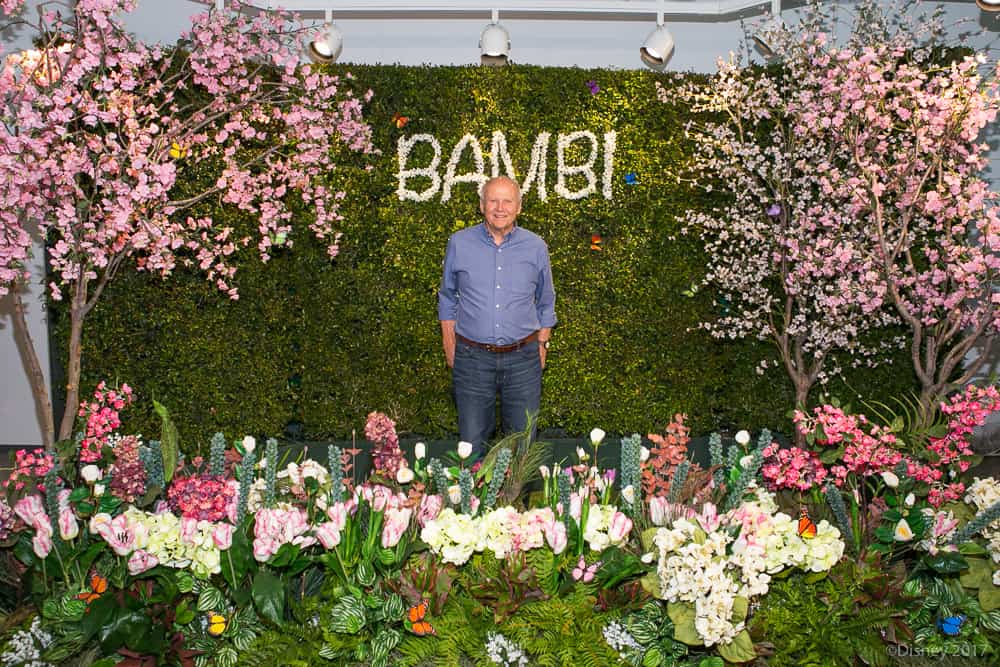 Donnie: If I live to be 1000 years old I couldn’t say it better than Peter did. The environmental profile, the forests, the reckless fire is spoken to by children in schools now. And I listen to them. And they pick up on that right away. Here’s an extension of Mr. Walt Disney’s Bambi. I get one of these a month, made by children from all over the world. If this doesn’t tell people that Bambi is forever, I’ll do push-ups in that parking lot for you. 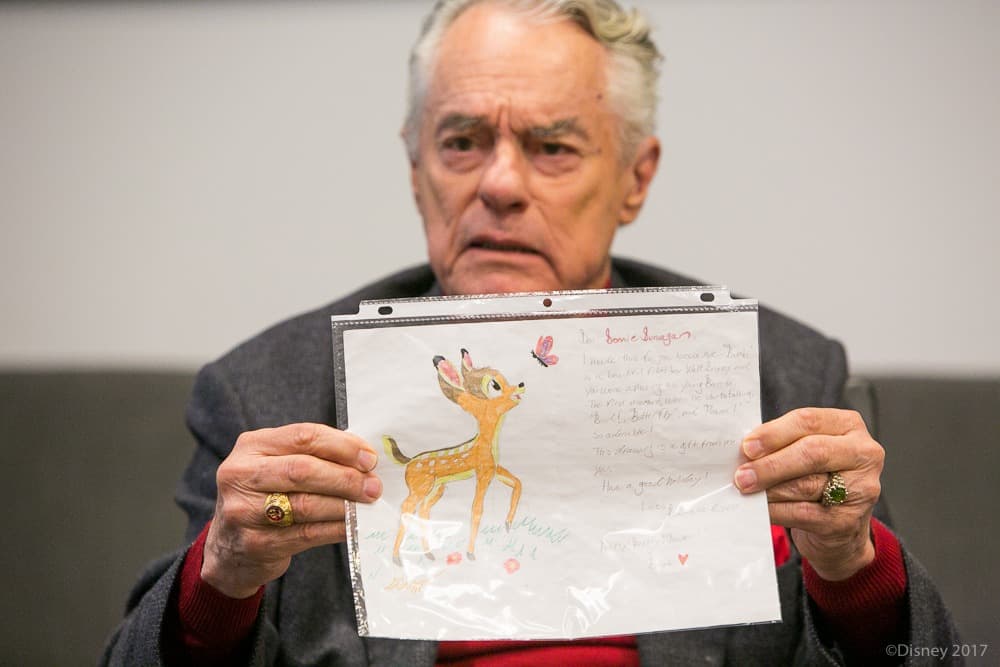 At this point Donnie teared up and the entire room wanted to rush to hug him.  It was like seeing your grandfather cry, it made me want to cry too. You could see the emotion on his face as he spoke about the children who send him letters and drawings, thanking him and Mr. Disney for Bambi. 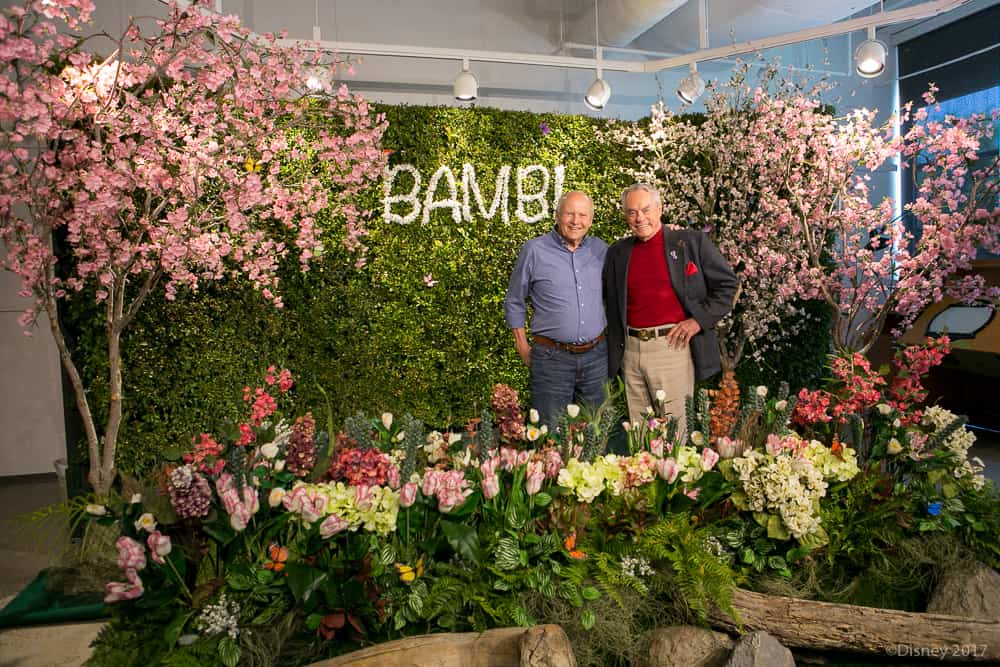 In the terms of how animated movies come to life, not much has changed.

We will draw on a computer, but we are using software that mimics what real art materials look like.

Paul designed a beautiful Disneygraph to celebrate Bambi's 75th anniversary. It took him about a week or so to get use to drawing the characters. After several tries, he ended up with something that was not what he originally envisioned.

I wanted Bambi and Thumper because that interplay of those two characters that's really one of the most heart-tugging things. It's so rich. Just a rich sense of history. 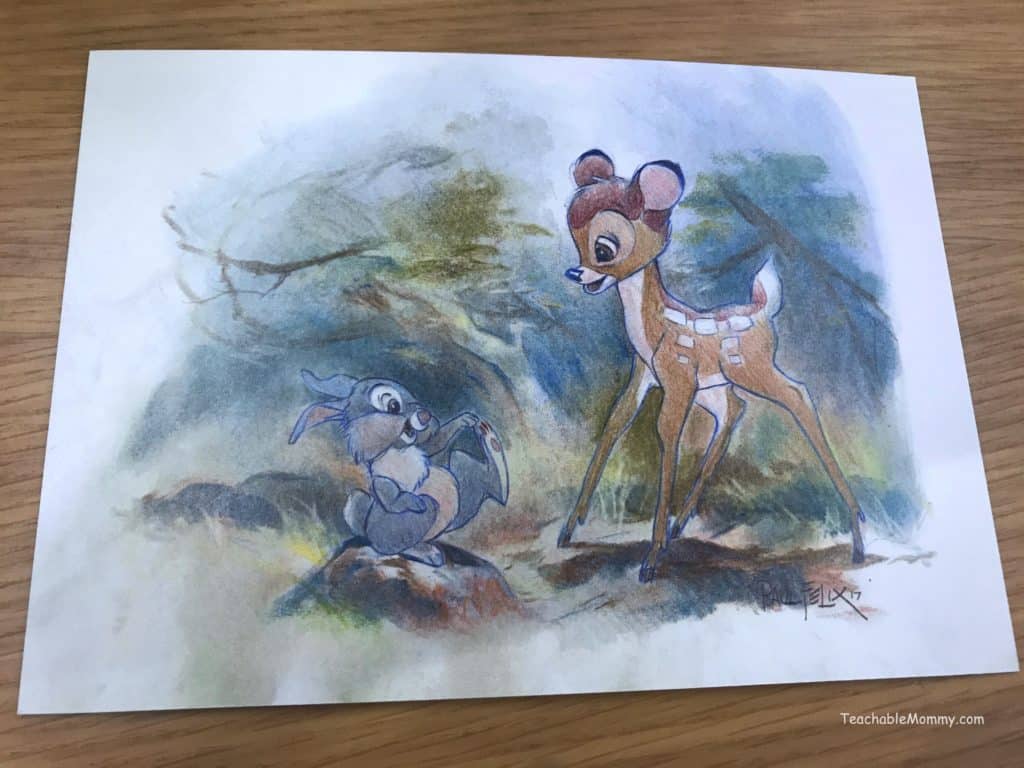 Everyone has their own unique take on drawing all the characters. 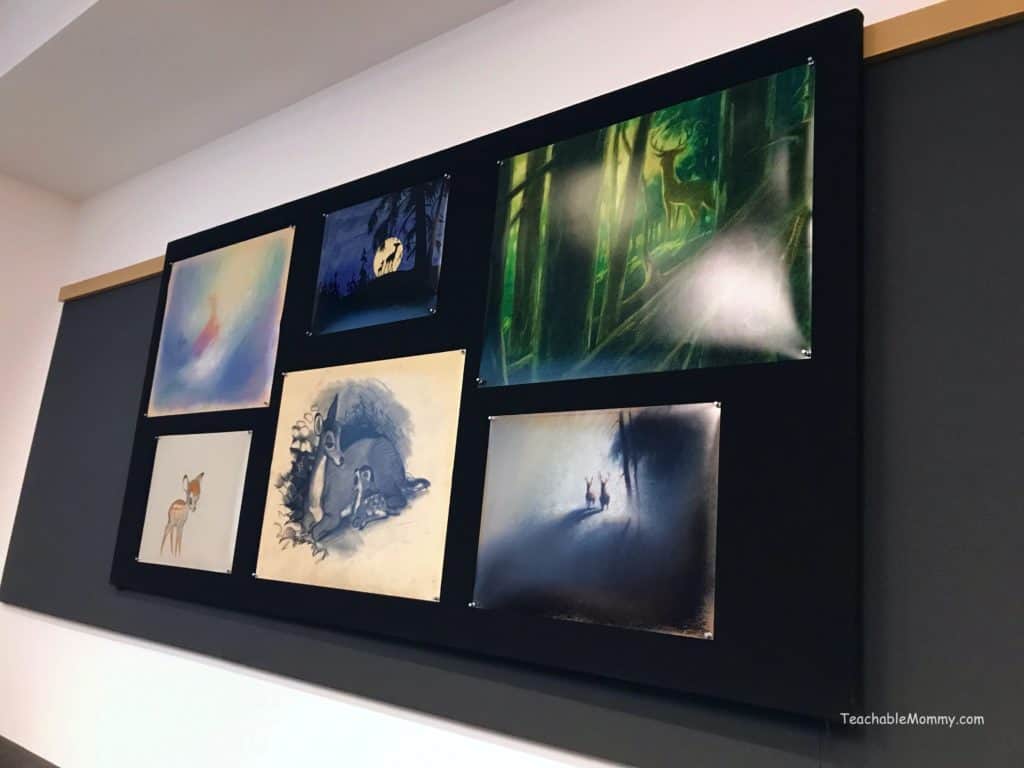 It was Mark Davis' drawings, one of Disney's 9 Old Men, that really unlocked the anatomy of the characters for Paul. 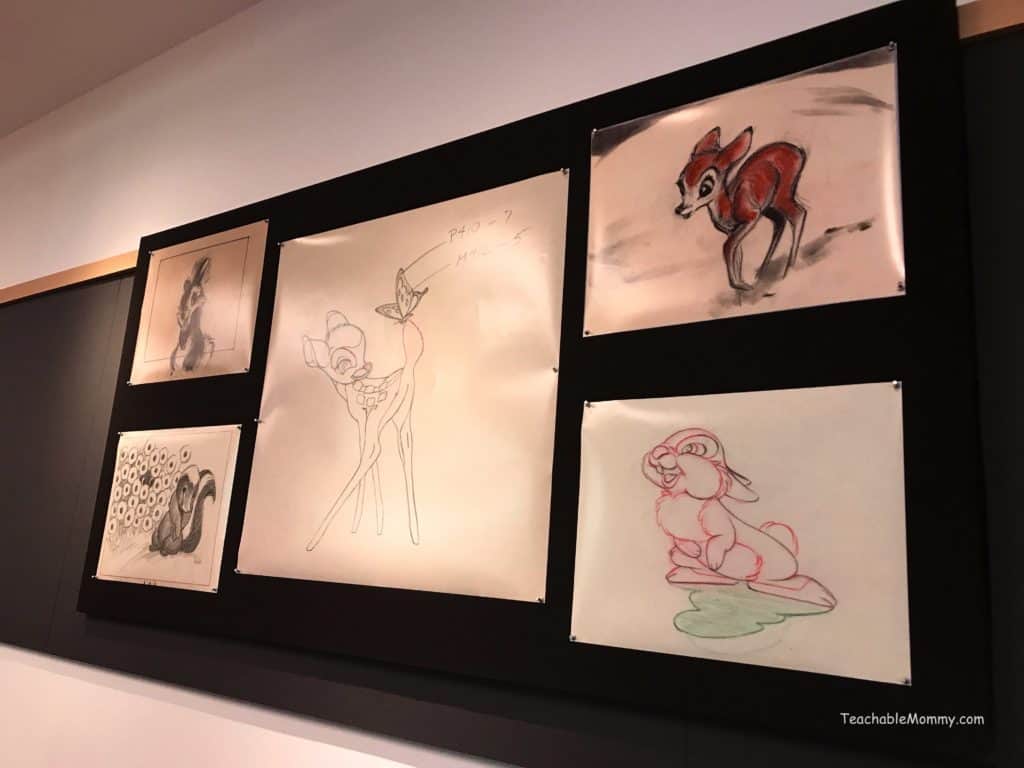 One of the biggest influences I ever had at Disney was the work of Tyrus Wong, who created the look of Bambi. 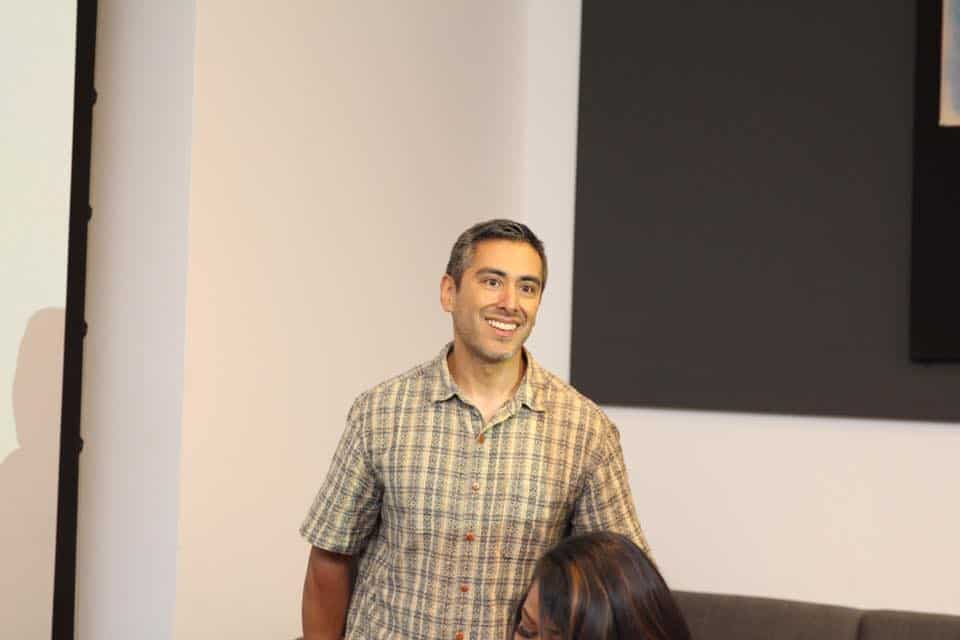 We are all storytellers.

What makes Bambi so special?

The themes are so broad, it is the cycle of life. And it doesn't aspire to be anything more than: here's a character that experiences the beauty and the reality of the world. And there is something profound in just that.

And what moms everywhere want to know: why is it always (or almost always) us taking the hit in Disney movies?

What's more primal than that connection? It is so hardwired into us. I think films are an extension of problem solving. Situations like that, lets you explore through a character what you imagine you're going to feel. I think thats the magic of filmmaking.

Bambi is available today on Disney Movies Anywhere for digital download and on Blu-ray June 6th! 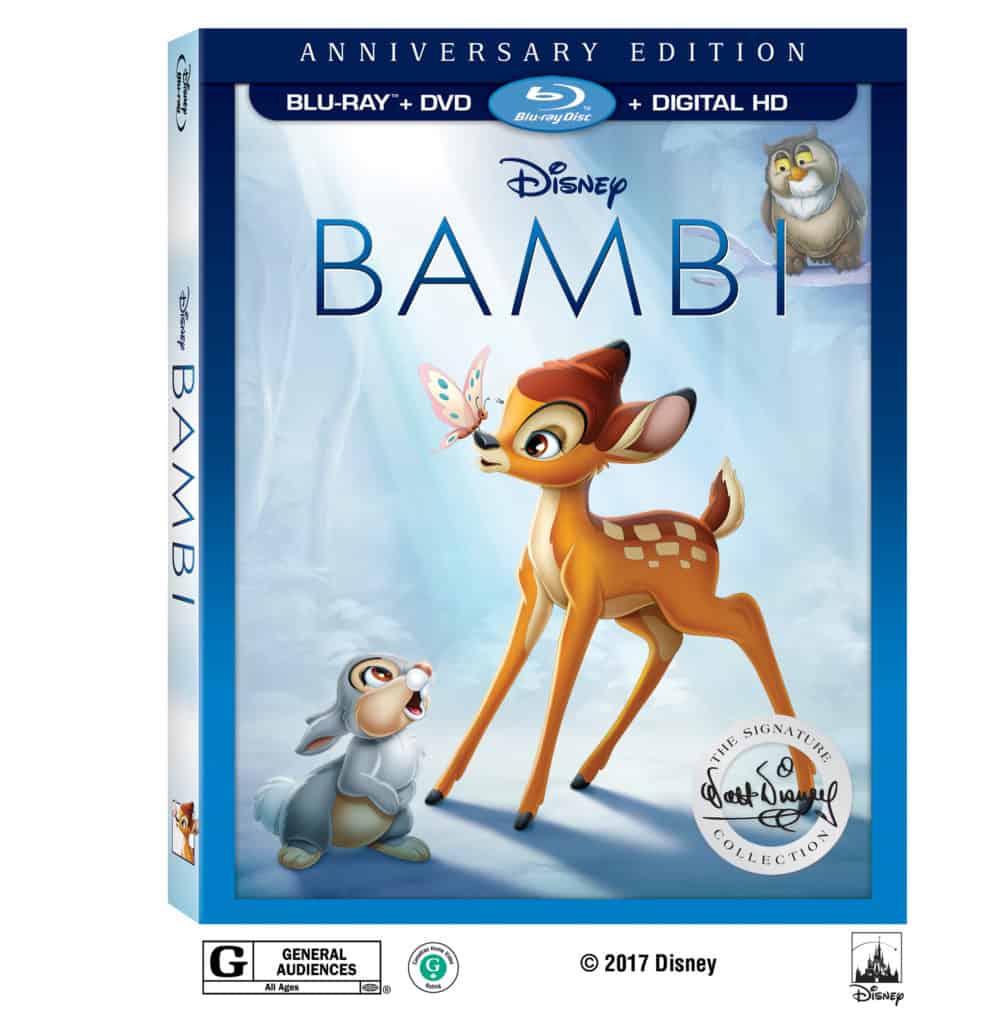