I couldn't believe it when I found out we would be interviewing Michael Douglas during the #AntManAndTheWaspEvent. I mean, he's Hollywood royalty. It just so happened he was our first interview of the day and it was amazing. He was sweet, funny, and down-to-earth. You know it's going to be a great interview when it starts off with Michael saying, “Good morning class, today we are learning about quantum mechanics.”

Spoilers ahead for anyone who hasn't seen Ant-Man and The Wasp! 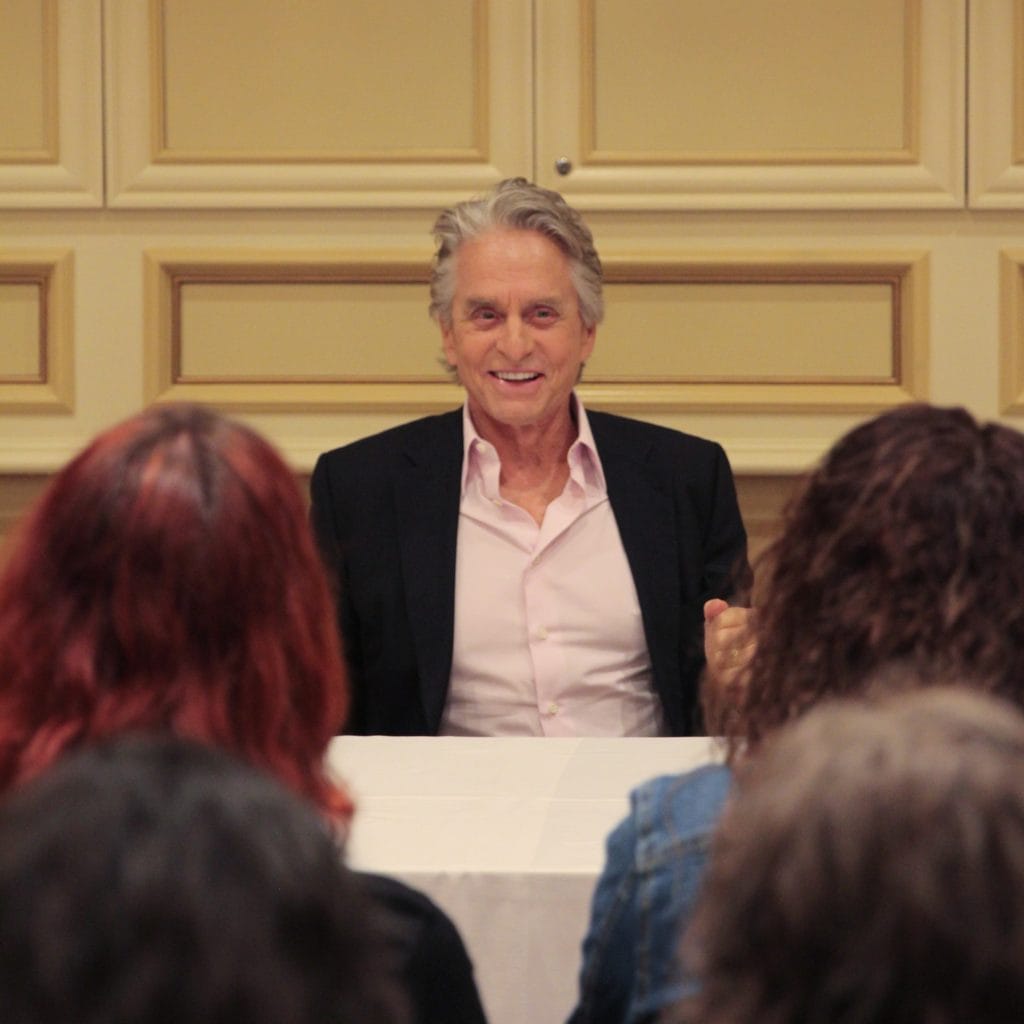 When it comes to working on movies like Ant-Man and The Wasp, it can be hard to visualize what the film will look like when it is finished. I always like seeing the actor's reactions to their films and hearing what they thought after all the hard work. Or in this case hearing what Michael Douglas thought about the process of making the movie and his excitement to finally see it.

When you’re doing them, it’s all in separate stages. You’re acting on one stage, stunt guys are another stage, green screens over here. And then they have those little miniature guys.

They work on it right up till the end, all the Marvel pictures. I think that’s part of their magic I guess. I haven’t seen it. I’m excited. They said it was funny. A lot of people liked it better than the first one. Our director Peyton was beaming. He looks excited so that’s great. 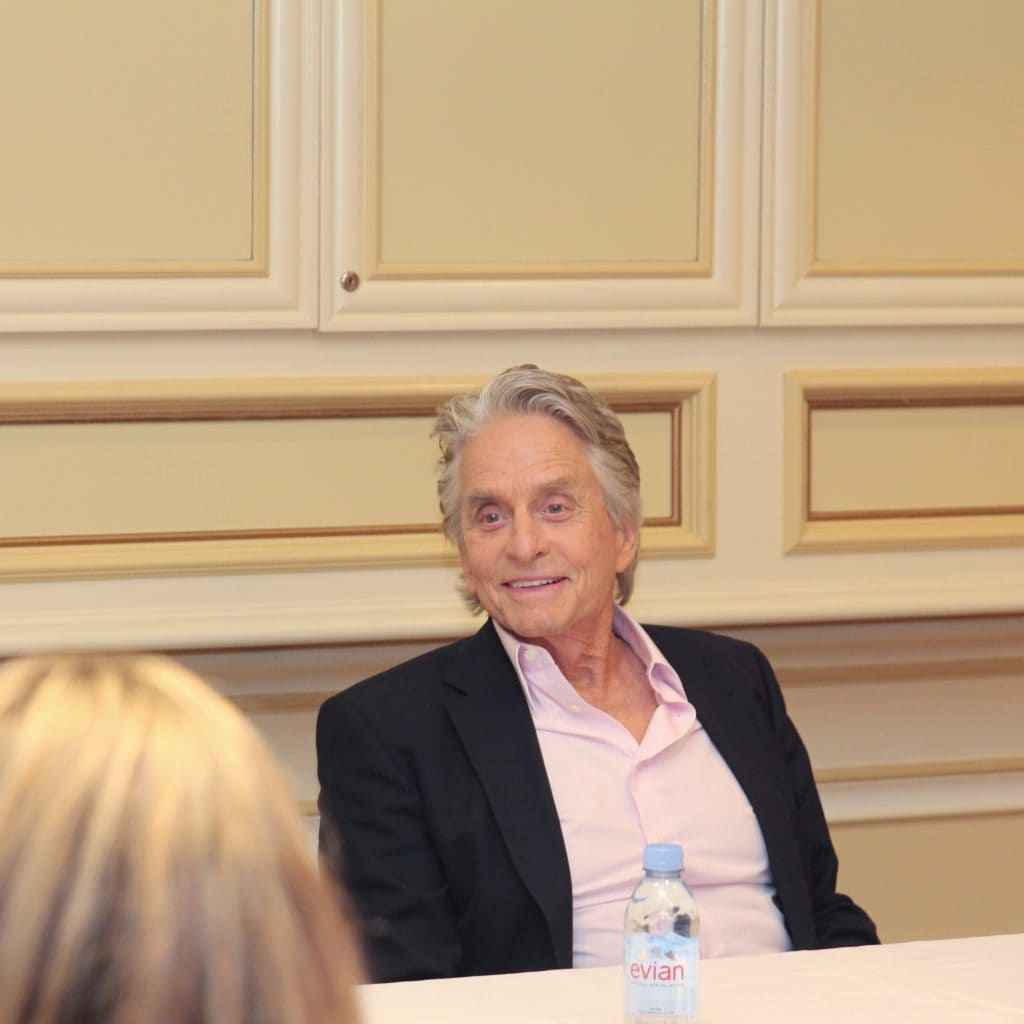 This cast had a great chemistry in the first Ant-Man movie. The vibe in this film is the same, everyone feeds off one another so well. Michael shares what he loves about making sequels and working with the same groups of actors. And gives some insight on what responsibilities the lead actor should take on.

There’s just an inherent relaxation and joy normally about a sequel. Or also why back in the old days, actors and actresses work together or directors together (a lot). You don’t have to introduce yourself again, you know each other. There’s a comfort factor which makes it easier. People know your own sense of humor. You’re not going to offend anybody. The comfort factor is really nice.

That combined with the fact that Paul is just a sweetheart. He’s just a great, great guy so it sets the tone. You know, most of my career I’ve been number one on a call sheet, the lead, you assume a lot of responsibility. If you’re smart, you set the tone. You’re the first one on the set, you make everybody else comfortable to make their best performances possible.

I was excited for Evangeline because if you remember the end of the first one, I show her Janet’s suit and there’s this look in her eyes when she sees her mother’s suit. But what I was looking at in the scene, I saw Evangeline going “I’m going to be a superhero.” (Laughter) 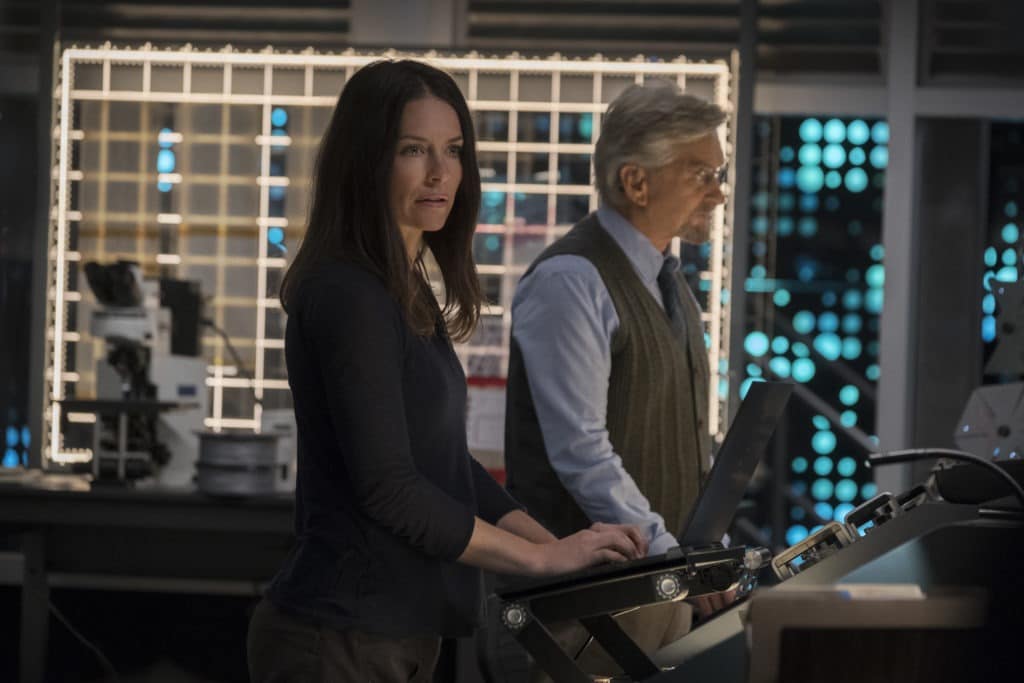 Marvel does a great job of casting, obviously. (Laughs) Michelle was just such a treat. I'm a tremendous Michelle Pfeiffer fan. I never imagined ever getting a chance to work with her.

Larry Fishburne is quite an actor. I think you’ll be hearing a lot about Hannah John-Kamen. They were all talking about her, almost like it was a sports team. “We have this great rookie, she’s fantastic.” And she really is, she’s wonderful.

Hank Pym finally gets to suit up in this movie. I was so excited to see him in back in a suit, it was time for Michael Douglas to have his superhero moment!

I was a little disappointed on the first one. (Laughs) I kind of reluctantly looked whimsically at how good everybody looked. Paul looked great. So, I got my old suit back, so if this continues, my feeling is, if you get big or small, and they can make you young, I might as well get back in there again. 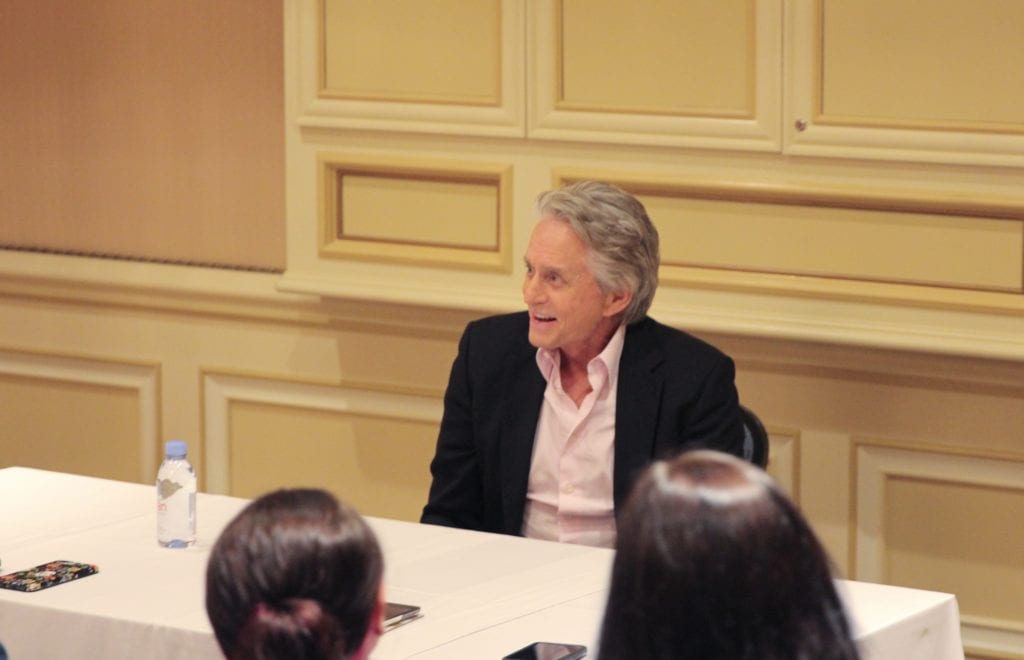 Speaking of age-defying special effects, both Michelle and Michael show up looking about 30 years younger in the film. What is that like seeing yourself so young?

It cracks me up. (Laughs) I’ve never done any of these pictures before. The last one (Ant-Man) was the first green screen film. It’s just this whole other world. I’ve got a whole new appreciation for actors who can act when there’s nothing there. I mean it may be just basic bottom terrain, but you’ll sit in these huge studios with green walls all around and Peyton telling you, “okay, the asteroids coming in here. Look up here.” And you’re afraid you’re going to be embarrassed.  And then you see it put together. They know what they’re doing. 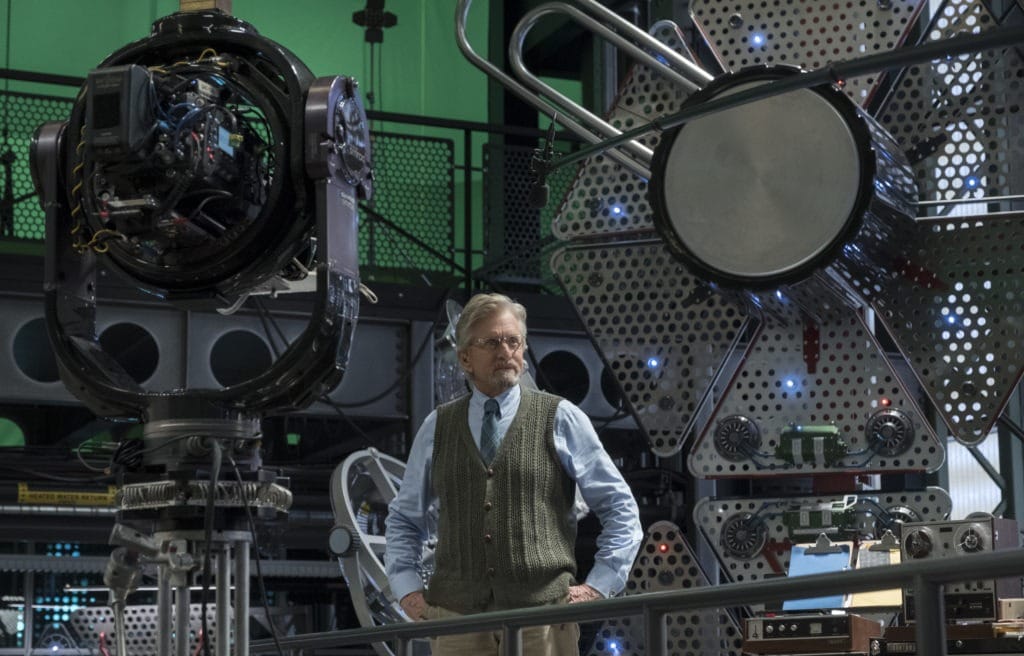 From everything we heard from the cast, and just watching the movie, you know this had to be a really fun set to be on. Michael has this kind of dry humor that is perfect for his character. But working with so many funny and talented people, is it hard to keep a straight face?

This set was a lot of fun. I was trying to find my place (Hank's place) in this. Basically, I did not plan on mentoring Scott. That was not my idea for him to take over the role of Ant-Man. He was a burglar nor do I think he’s proper for my daughter. (Chuckles) So, I was trying to find kind of a dry, a little intellectually aloof (way to play Hank).

But as far as cracking up, with Paul it’s difficult because he ad libs so much. I’m a little jealous of Paul because I’m kind of carrying the story line, and having to go home to research about what the hell I’m talking about. (Laughter)

Then Paul will just come in with some one-liner and steal the scene. He’s unpredictable, wonderfully so. And funny. So, it happens a lot. 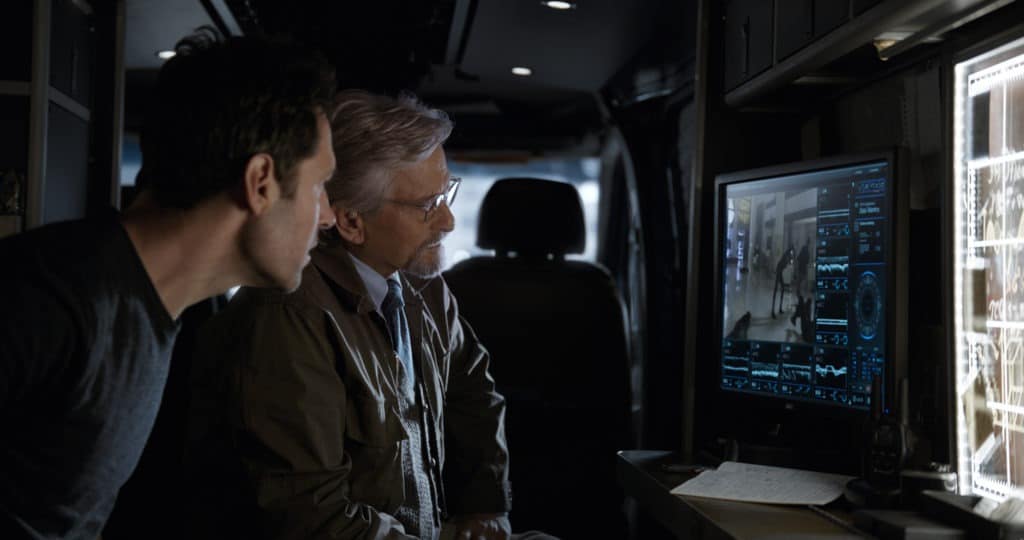 I can imagine it took some time to learn all the correct pronunciations and even some basics about the science in this film. I mean it's not basic middle school science that is for sure!

Getting your mouth around some of the words was hard. I can’t tell you that I graduated in quantum mechanics university, no. But it’s fun. It’s just your sort of restricted in the freedom of what you can say.

At the end of Ant-Man, Pym Labs was destroyed. Hank has some new real estate in the film and I love what Michael has to say about it and being on the set. I forgot to ask him if he could hook me up with shrinking luggage for my next trip. Darn it!

Pym Laboratory got demolished in the first one. But I must have put a lot of money away. (Laughter) I’m thinking about all this covert intelligence operations, with countries stealing our secrets. So, I must’ve had some really high, high classified tools in there. (Laughs)

I loved it. It was just staggering. It was absolutely stunning, one of the most beautiful sets I’d ever seen. 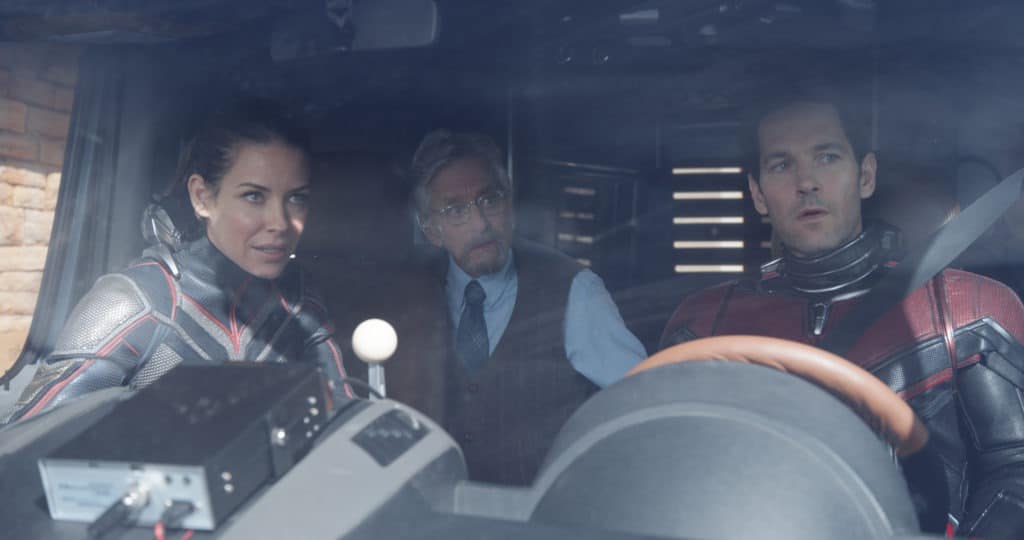 After doing the first film, Michael received some advice from a younger actor, his son.

Dylan came out of the movie, his arms were crossed. He said “Dad, this is going to be very good for your career.” (Laughter) I said, oh. He goes “Dad, you don’t understand, this is going to bring a new audience for you. I'm recommending you do a sequel if they offer it to you.”

It is true, I must say. I’ll be talking sometimes and I'll feel something pulling on my coat and I’ll look down and see a five-year-old kid. (Mimics kid pointing up) Ant-Man! 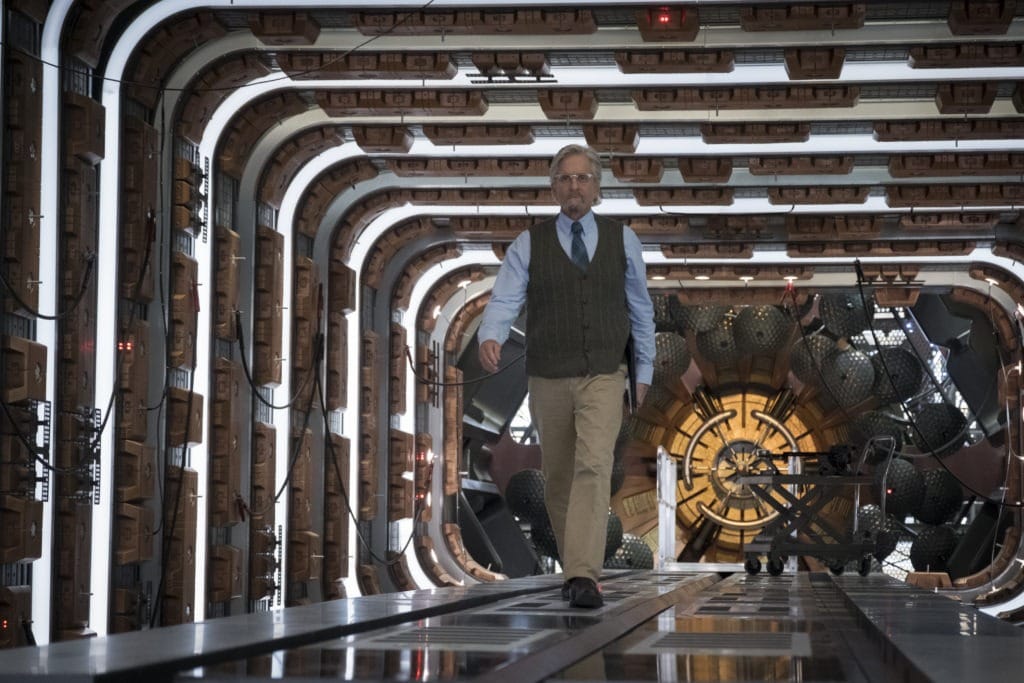 Now that Hank has suited up in Ant-Man and The Wasp, can we expect to see him in Avengers 4? I mean someone needs to help Scott out…

The quantum realm’s getting popular. (Laughs)

(Looks around the room) If I open my mouth, a blowgun (makes blowgun sound) It’s a Marvel blowgun. (Laughter) I have learned my lesson. The KGB has nothing on me. 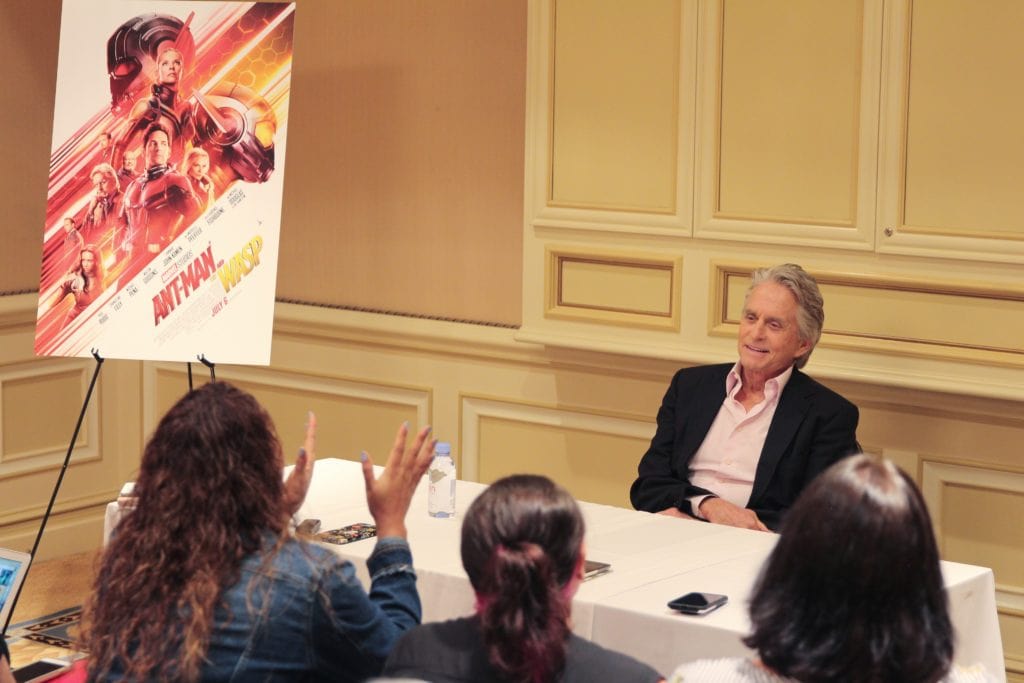 If you take the time to research Michael Douglas' career you know he has been in so many different films and shows. I remember watching him in A Chorus Line and Fatal Attraction. When I saw him as Dr. Hank Pym I thought wow this man has done every kind of role out there, action, drama, suspense, comedy! With an expansive career like that, what stands out to him?

Wow. Romancing the Stone, The China Syndrome. I had a run there with Black Rain, War of the Roses, Fatal Attraction, Wall Street. I like a picture called Wonder Boys. Robert (Downey Jr.) was in that. 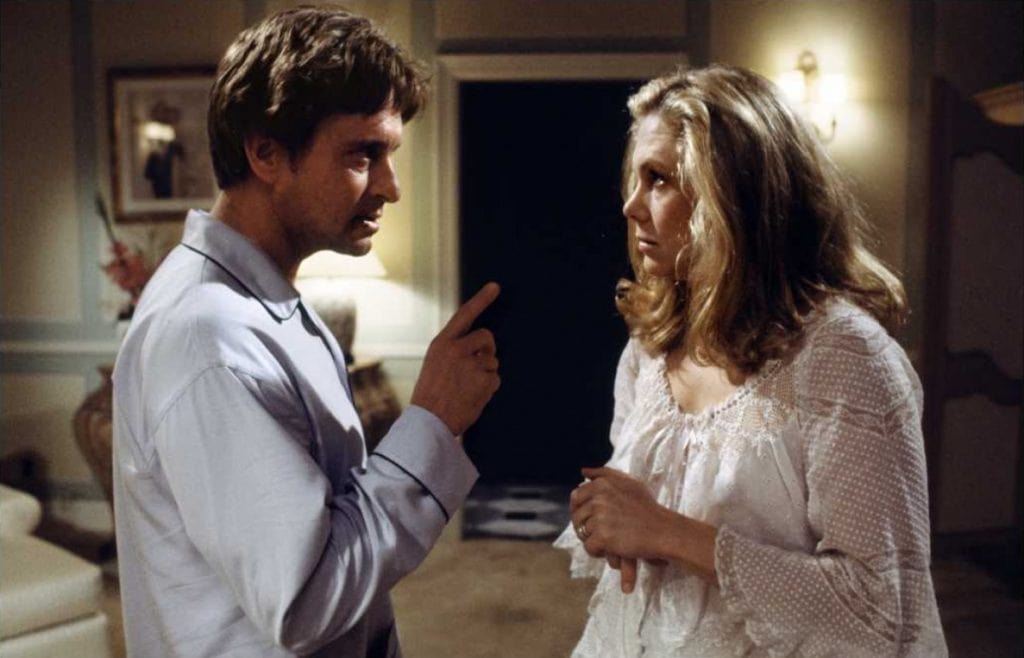 War of the Roses

Falling Down, American President, is mentioned a lot. I got over 50 pictures and if I was a baseball player I would have a pretty good batting average. Had a lot of grand slams, not a lot of strikeouts.

He mentioned earlier in the interview being pleasantly surprised to be playing opposite Michelle Pfeiffer. Over 50 pictures later, is there anyone else he would like to work with?

One of the joys of this point in my career, I want to work with nice people. You can be talented and you can be nice. I just enjoy the communal feeling of doing your best work comfortably and reaching out and not having a lot of tension. 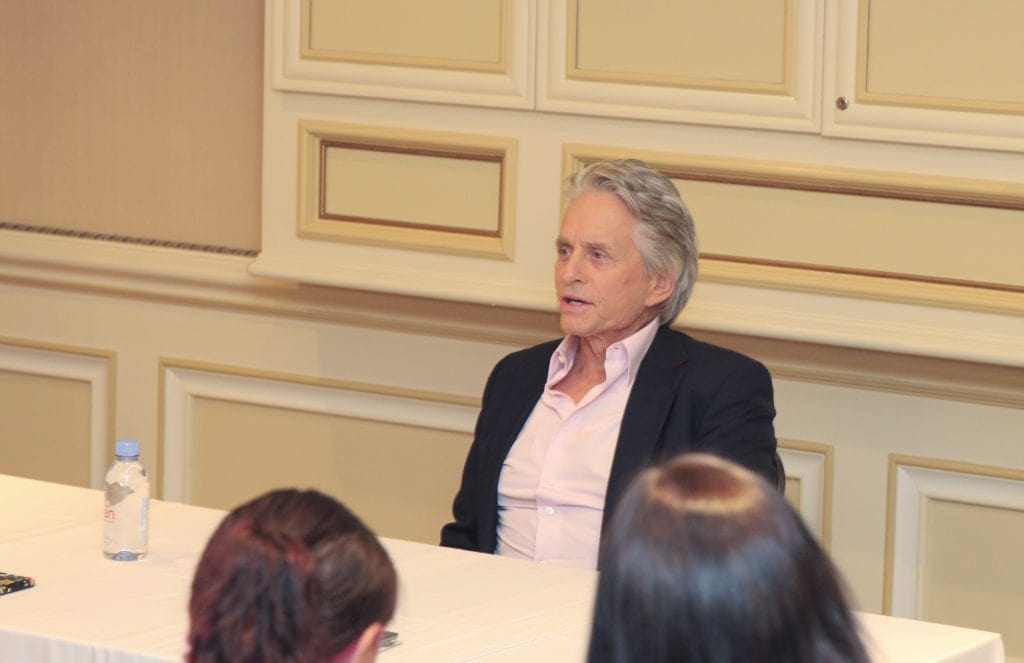 Finally, Michael shared what it is like at this point in his career, being a part of the Ant-Man franchise and what he looks for when choosing movie projects to sign on to.

Well, it’s easier in the supporting role, the pressure is off. I got a history as a producer, so normally when I’m acting or I may lead in a picture, I’m really looking out for the whole film. In that spirit, I know what my role as an actor is but I know mostly what makes a good movie. And I guess what maybe separates me from most actors is that I’m not just thinking about my role.

The thing that struck me about Ant-Man and now Ant-Man the Wasp is the response that we're getting. It’s such a divisive world right now, both in our country and around the world. One of the joys of this business is you make a movie like this, and it’s a worldwide success. And audiences from every continent go to see this movie and they laugh.

It just brings everybody closer together. It’s actually the aspect of our industry which I admire the most. And we need that.

What did I learn from class with Michael Douglas? Be a nice person, do your best in the role you're given, we are more alike than some might think, and the world as a whole needs more laughter. Class dismissed. 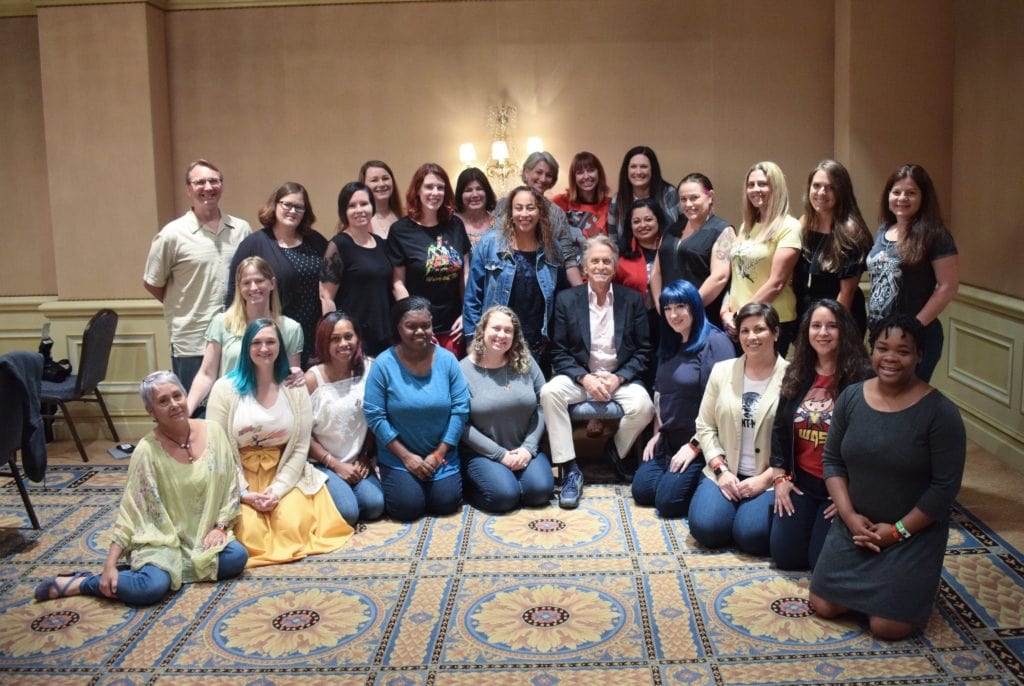 See Michael Douglas as Dr. Hank Pym in Ant-Man and The Wasp! In theaters today! 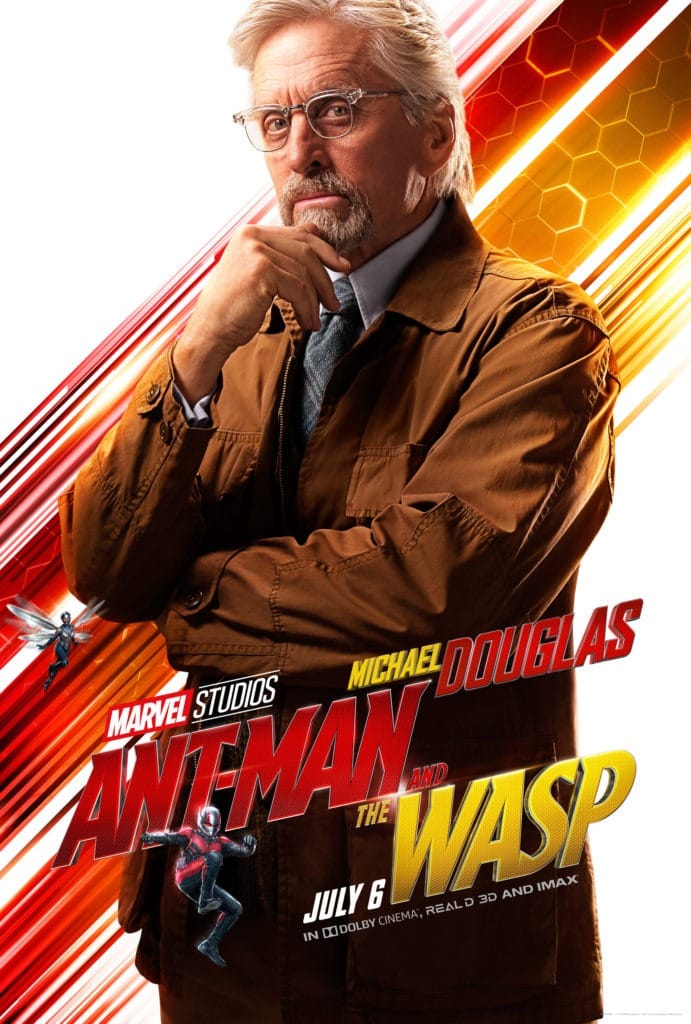