If you thought Chapter 14 The Tragedy was going to be a filler episode you were wrong. We all were. This episode was short but packed within its runtime was the return of a Star Wars favorite, some justice for his family tree, and high stakes. It left a lot of us breathing heavy and looking ahead to next week. Lets breakdown The Mandalorian Chapter 14.

Spoilers ahead if you have not watched The Tragedy.

The Mandalorian Season Two The Tragedy Easter Eggs and Breakdown

Dank Farrick. Mando says the popular exclamation/curse when Grogu uses his powers to get the metal ball back from his hand. It seems this time, he's excited but sad. He knows this means their time together is coming to a close.

“Driving with the top down” the descent into Tython won't be an easy one since the Razor Crest is too big. Din tells Grogu we have to drive with the top down. That is the name of the song that plays in Iron Man when Tony Stark takes the Mark II out for a test flight.

Boba Fett's ship, The Slave 1 is back. And this time it's not just Boba onboard but also Fennec Shand. The Slave 1 first appeared in The Empire Strikes Back. 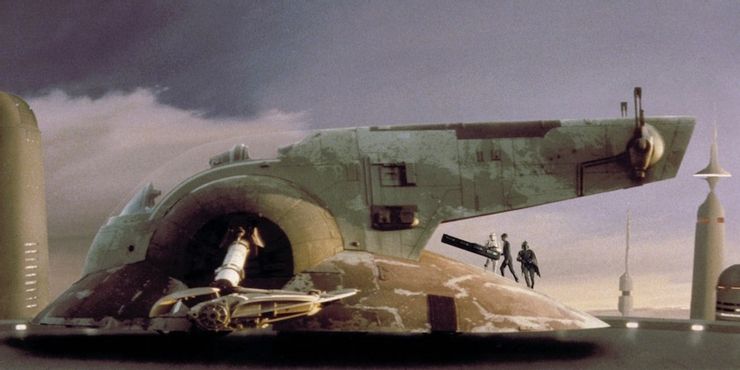 After being placed on the seeing stone, a blue butterfly seemingly distracts Grogu from doing whatever it is he was suppose to do. Butterflies have appeared in Star Wars before including on Endor and in The Clone Wars.

The architecture of the Seeing Stone has been seen before in various ancient Jedi sites, including the Knights of the Old Republic‘s Jedi temples and audience chambers.

Once Baby Yoda meditates the stone itself lights up in a similar fashion to Cal Kestis' in The Fallen Order. There also happens to be a shrine to Yoda/Grogu's species on Zeffo. 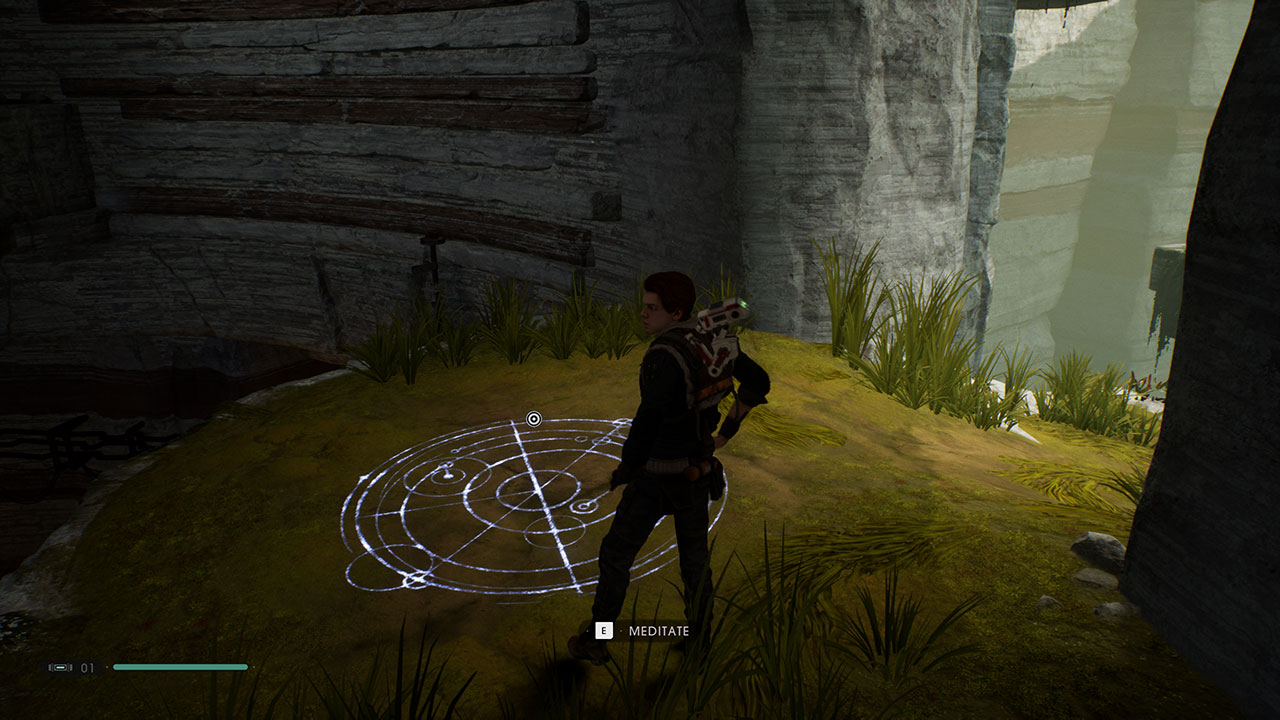 Boba Fett has been hunting Din Djarin but not for what Din thinks. He's not after The Child, he only wants his armor back. Din has no idea who he is and denies him saying this armor is for Mandalorians only. Boba responds with “I'm a simple man making his way through the galaxy.“ This is the line Jango Fett gives Obi-Wan Kenobi in Attack of the Clones after the later states he must be so proud of the clone army. A young Boba Fett was in this scene.

The rest of this line is “like my father before me.” Another famous Star Wars line, this was said by Luke Skywalker to Emperor Palpatine proclaiming himself to be a Jedi like his father Anakin.

One of the weapons used by the troopers when fighting off Fett, Mando, and Fennec is the repeating blaster. An early version of this was used in the attack on the Hoth base in The Empire Strikes Back. Variations have been seen in video games, Legends novels, and The Clone Wars.

Fennec Shand pushes a large boulder down crushing several Stormtroopers. This is a double Easter Egg. First it references the running joke how Ewoks managed to beat the Empire using sticks and stones in Return of the Jedi. It also references another famous Lucasfilm, Indiana Jones Raiders of the Lost Ark.

The best scene for fans of Boba Fett came when he stepped back into his armor and proceeded to take out all the Stormtroopers around him using both old and new weapons. He even used his missile launcher from his jet pack. Classic.

Unfortunately, despite their best efforts, Grogu was taken by The Dark Troopers. Moff Gideon confirmed they are in fact Dark Troopers. Dark Troopers originally debuted in Legends Star Wars: Dark Forces video game. It is still unclear exactly what they are, meaning if they are Force sensitive or not. But with the recapture of Grogu and Gideon paging Dr. Pershing we might find out in the next episode.

Once the fight is over and Din is staring dejectedly at the remains of the Razor Crest, Boba Fett explains his claim to Cobb Vanth's armor. He shows off a chain code embedded in the armor, a hologram of an alien script. The decoded message mentions Concord Dawn, the home planet of Jango Fett in the Mandalore sector, Jaster Mareel who saved Jango as a child , and The Mandalore Civil War.

With this code, The Mandalorian has canonized the Jango Fett Open Seasons comic. In the comic, the Fett family is slaughtered by Tor Vizsla's Death Watch. Jango however is rescued by the peacekeeper-turned-Mandalorian Jaster Mareel.

So what that all means is that Jango Fett and Boba Fett are both Mandalorians. Although Boba Fett was the original Mandalorian in Star Wars, there has been debate over the years whether or not he and his father were true Mandalorians. This settles the debate. Jango was a foundling like Din and as his son, the beaker armor belongs to him. 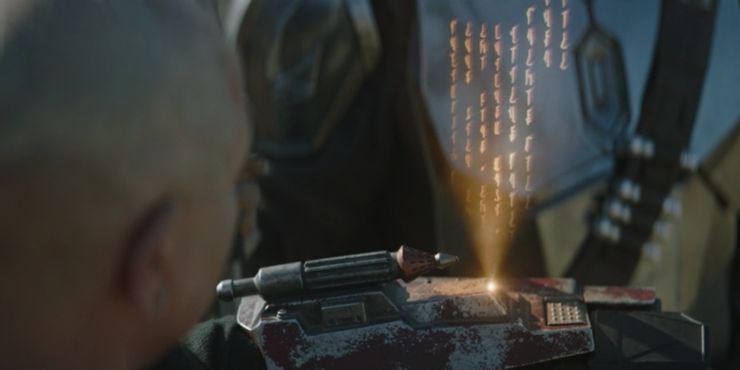 40 years prior to A new Hope the planet of Mandalore was engaged in a civil war. The struggle was between extremists, The Death Watch, who believed Mandalorians should remain feared warriors and a more progressive, peaceful movement. This is mentioned briefly in the interaction Din has with Bo-Katan in The Heiress episode.

We don't know what side Jango was on but since it was The Death Watch who saved Jango and made him a foundling and given how fierce both he and Boba are, it is likely he sided against the peaceful Mandos.

Back on Navarro, Din visits Cara Dune, the newest member of the New Republic police force. Din needs her help in finding Miggs Mayfield, in hopes of springing him from jail so that he can help track down Moff Gideon's ship. There are a lot of prisoners in the system and they include a Nikto, a Mon Calamari, Scrapjaw Motito's species, a Zabrak, an Aqualish, a Tusken Raider, a Quarren, a Hassk, and a Gamorrean.

Jon Favreau and Dave Filoni have said that Baby Yoda does “bad” things to try and dampen his cuteness factor. Onboard Moff's ship he resorts to a classic move, the Force Choke. Not only does he Force choke but before he starts crushing windpipes he is throwing around the Stormtroopers like playthings. It seems like he remembers some of his training but unfortunately he does not have the stamina to last for long.

Once he has tired himself out, Moff Gideon approaches him and shows him the Darksaber. When Grogu reaches out Moff pulls it away saying he wouldn't know how to handle such a blade, and might poke an eye out. This is a nod to the famous picture of Mark Hamill examining a lightsaber prop. It has been turned into a classic Star Wars meme with some people thinking it was actually in A New Hope. It's not. 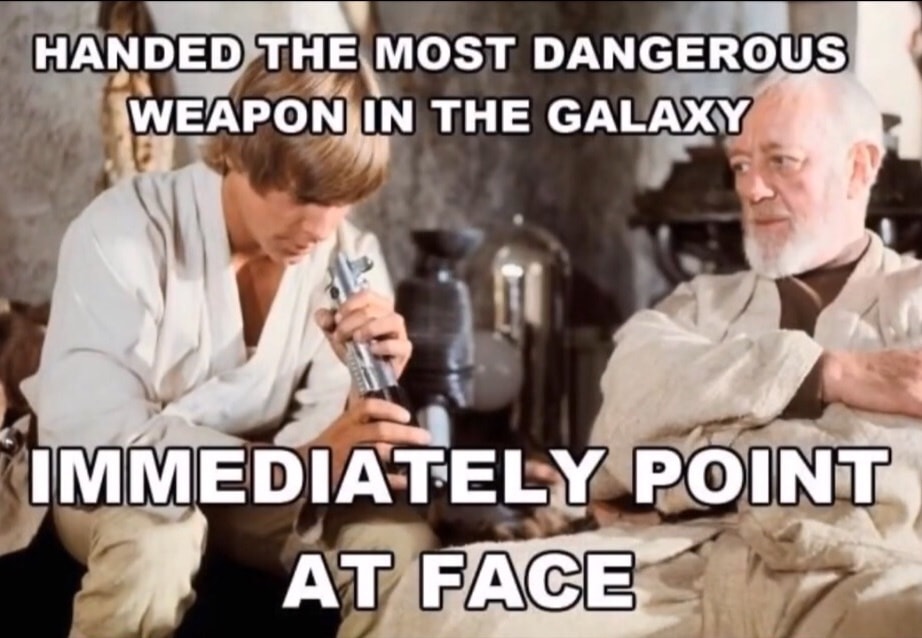 Moff Gideon orders Grogu to be subdued and then cuffed, The trooper uses as Stun Blast to accomplish this. This type of attack was seen at the beginning of A New Hope when Princess Leia is found by Stormtroopers after recording her message to Obi-Wan.

Once he is properly restrained, Moff wants a encrypted message sent to Dr. Pershing telling him they have the donor. It looks like we might see just what experiments they are conducting using Baby Yoda's blood in the upcoming episode.

The Mandalorian is streaming on Disney+

Previous Post: « Godmothered Review | You’re Never Too Old For Happily Ever After
Next Post: Disney Plus Safety Movie Review | Inspirational, Uplifting, and Powerful »