He is Loki, of Asgard, and he's burdened with glorious purpose. Or rather he thinks he is but the TVA has other plans. Loki has escaped the Avengers only to find himself in the middle of the TVA, an organization tasked with guarding and maintaining the sacred timeline. Unless he agrees to help Mobius, Loki may end up being reset. Loki episode 1 packed in a lot of info so let's find the easter eggs and get into this breakdown.

Spoilers ahead if you haven't watched Loki episode 1.

Loki begins right where we left him in Avengers Endgame, escaping the Avengers in 2012 after the Hulk caused a commotion over taking the stairs. As Loki disappears Thor can be heard calling for him.

After leaving New York, Loki lands in the Gobi Desert in Mongolia. A few people gather around him and he proudly announces “I am Loki, of Asgard and I”m burdened with glorious purpose.” This is the same line he used when he first appeared on screen during The Avengers. Poor guy can't catch a break because these people do not care, much like after Hela introduced herself to the Asgardians in Thor Ragnarok.

The TVA's Minute Men show up to arrest Loki for crimes against the sacred timeline. He is hit with a Time Twister. The Time Twisters can kill but it can also trap you in a loop of time, like poor Loki here. In the comics Time Twisters were created by the last director of the TVA in order to survive the end of time and travel into the next universe with the knowledge on how to improve the future. They however ended up going backwards destroying things and causing problems. The Time Twisters are the “evil” version of the Time Keepers. 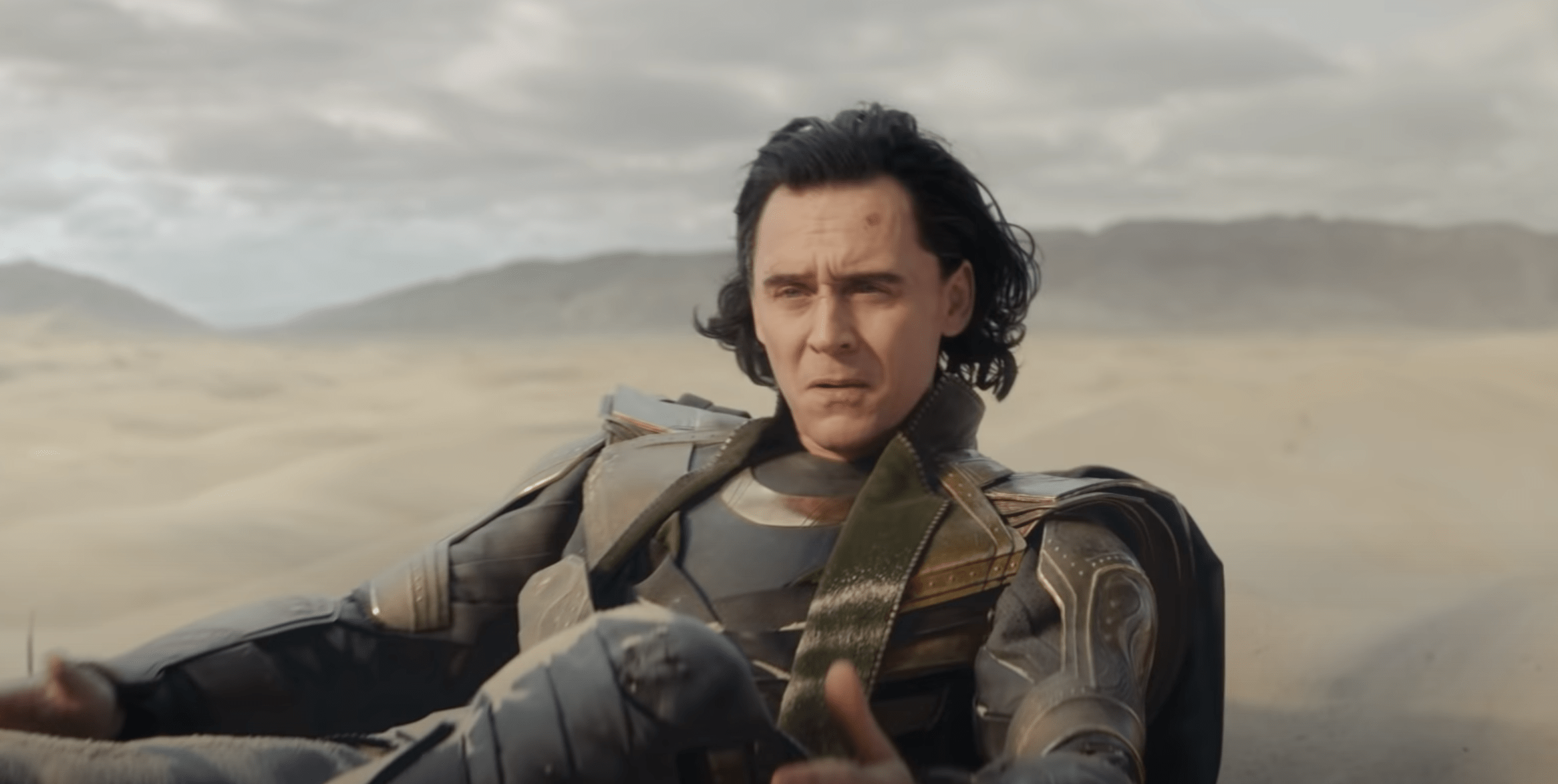 Hunter B 15 takes Loki into custody and deposits him inside the TVA, the Time Variance Authority, for his sentencing. A Skrull is seen in the lobby as B 15 hands over the Tesseract to the clerk. Loki is stripped of his Asgardian leather and put into a prisoner's jumpsuit. He then lands in an office where he must confirm everything he has ever said.

It's important to note that the TVA is handling the Tesseract as if it is nothing more than a plain blue box. Unlike how on Earth the humans of the MCU barely like to touch it while using instruments. On Earth and even Asgard only Loki and a few others with powers can touch it without consequences.

Loki awaits his trial and gets an intro to the TVA by Miss Minutes, their mascot. Miss Minutes is voiced by Tara Strong. Her video regarding the TVA is similar to Disney Parks ride instruction videos that play as you are close to the ride, like Slinky Dog Dash and Seven Dwarfs Mine Train. In fact the chimes sound similar to the People Mover and Star Tours.

Variants are those who deviate from the timeline. Their actions can cause a Nexus Event. Nexus Events destabilize the time stream and can result in another multiverse war. Scarlet Witch is a nexus being and a reference to that was an Easter egg during WandaVision. Why didn't her tampering alert the TVA? We don't know, yet. 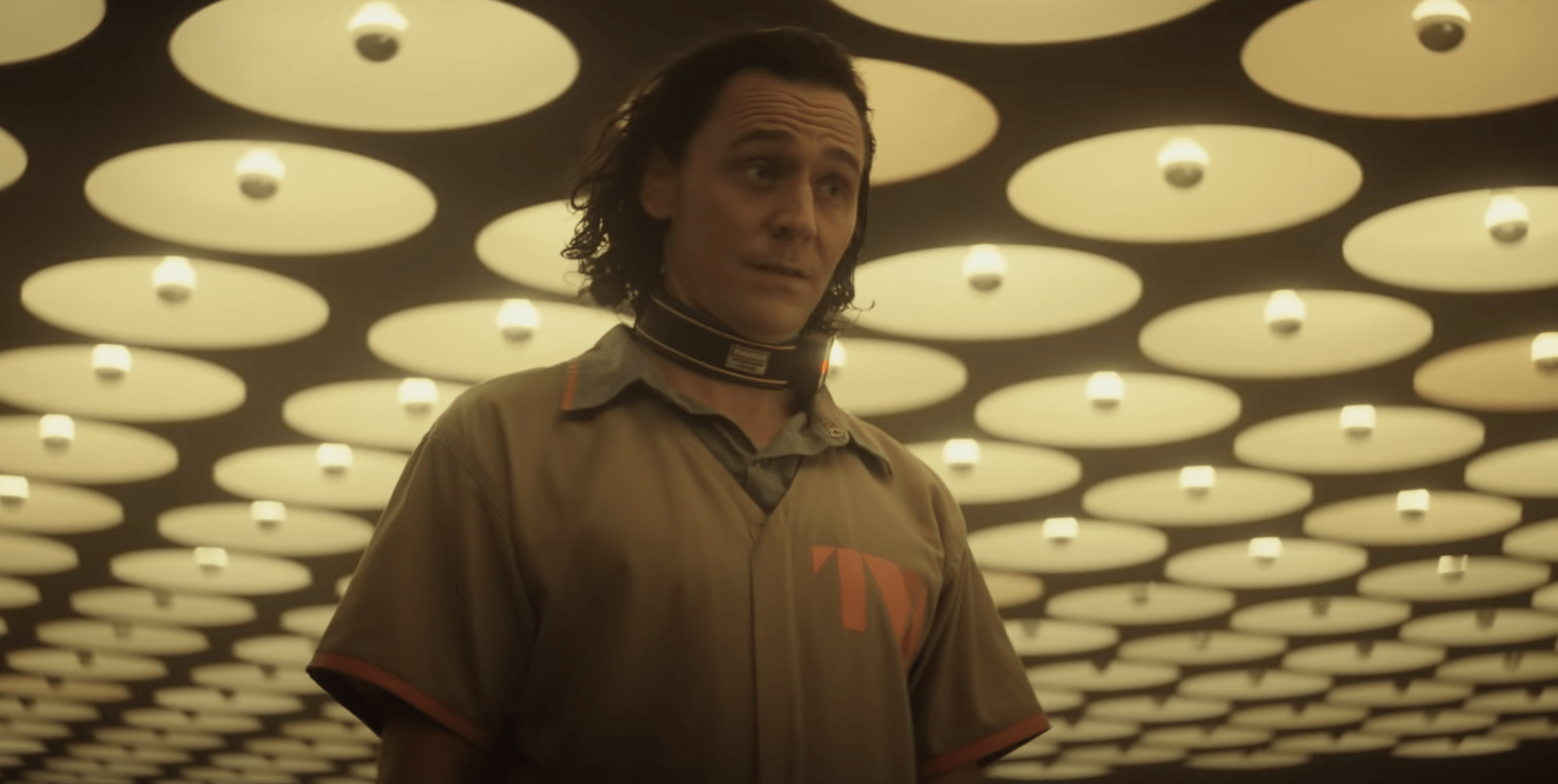 AIX-EN Provence, France 1549. Mobius has arrived on the scene where several of the TVA's Minute Men have been killed by a dangerous variant. This is the scene with the stain glass Satan picture, many thought could be a reference to Mephisto. A lonely child points to the devil saying he killed the men. He also shows Mobius a pack of gum given to him by the devil, Kablooie Blooberrie Gum. Mobius is informed there is something he might be interested in back at the TVA.

At his trial, Loki variant number L1130 stands before Judge Renslayer to plead his case. Loki figured out the Avengers had been time traveling and blames them for the trouble he caused by disappearing with the Tesseract. Renslayer however dismisses him saying what they did was suppose to happen, him escaping was not. She finds him guilty and sentences him to be reset.

In the comics Ravonna Renslayer aka Terminatrix was an actual Princess who ended up falling in love with Kang the Conqueror. Kang is the villain in the upcoming Ant-Man and the Wasp Quantumania.

Mobius intervenes however and takes Loki to the Time Theater. On the walk over, Mobius mentions Nightmare being another department and that he would gladly help Loki destroy it. Nightmare is a villain in the comics who rules over the Dream Dimension. He is a major villain of Doctor Strange and has been rumored to be part of Doctor Strange in the Multiverse of Madness.

In the theater, Loki's time during Avengers is shown. Mobius also shows the time Loki was DB Cooper. Apparently that all happened due to a bet he lost with his brother Thor. Mobius is drinking Josta Soda, a discontinued Pepsi product that was the first energy drink introduced by a major US beverage company.

As Loki continues to doubt the TVA, Mobius shows him scenes from Thor The Dark World, things that have not happened yet. He watches as his mother dies due to him telling the dark elves where to find Thor. Loki is clearly upset and the first chance he gets he escapes. 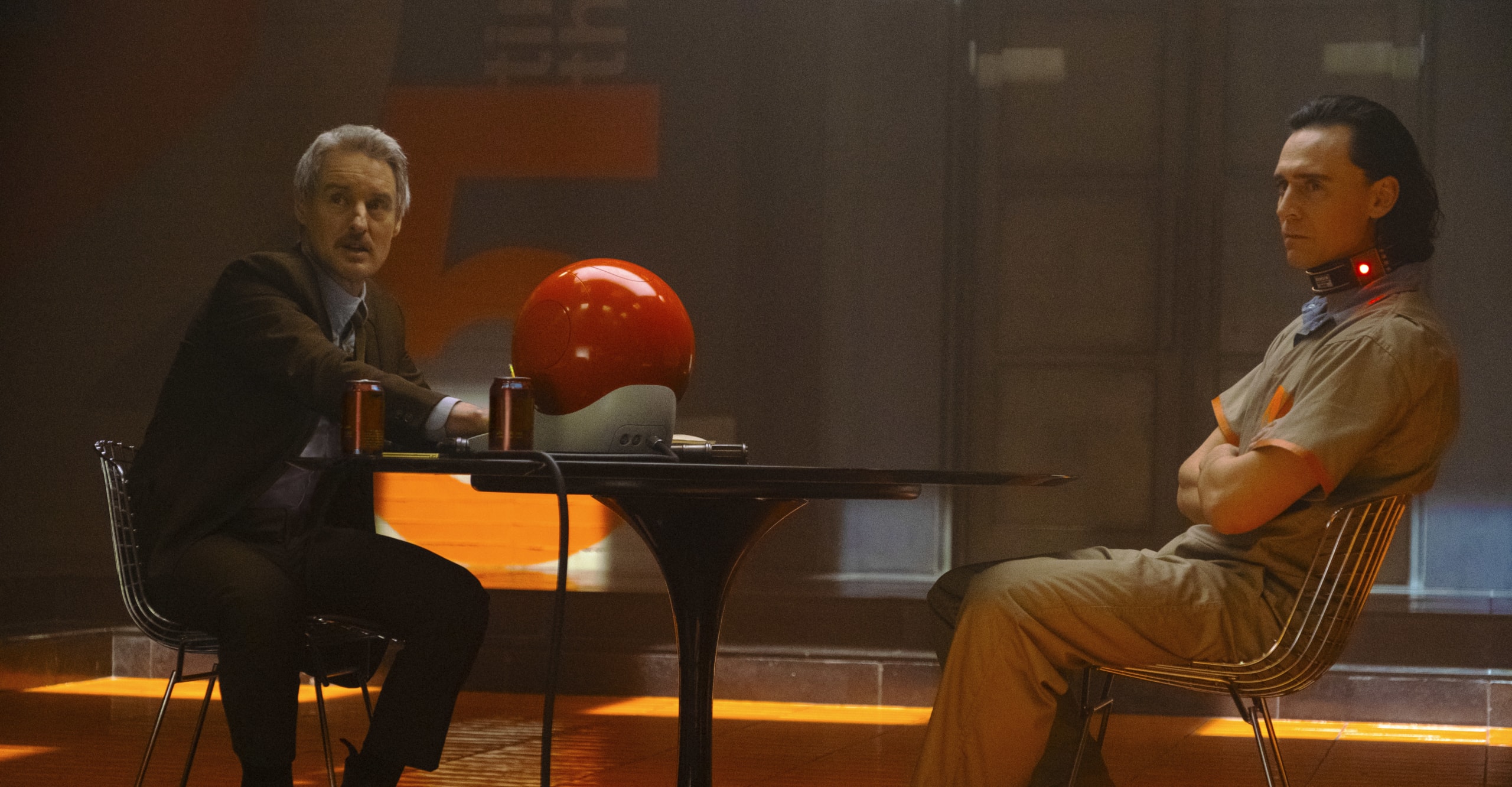 Loki encounters Casey, the clerk who took the Tesseract from him earlier. Casey hands him the Tesseract from the junk drawer it was sitting in. Inside the drawer are several different Infinity Stones. Casey remarks that they get a lot of those and some people use them for paperweights. Knowing how powerful those stones can be and seeing how the TVA cares little about them, makes Loki realize the TVA is the greatest power in the universe.

Out of all the stones in the drawer the Soul Stone is missing.

In the drawer with the Infinity Stones is a Honus Wagner baseball card the most famous and valuable baseball card of all time, a war medal, a picture of a soldier, a cross and a $5,000 casino chip.

It's not super clear, but Loki picks up a Time Stone and isn't shown putting it back.

He returns to the theater room and watches the rest of his life play out, seeing his redemption in Thor Ragnarok and his death in Avengers Infinity War. He realizes he can't go back to his own timeline and he reveals to Mobius that no he doesn't like hurting others, it's just part of what role he is suppose to play.

As the movie strip unspools from he reel it has the tag “ETH-616” that references Earth-616. In the comics that is the primary universe that most Marvel Comics take place.

Mobius needs his help to find the dangerous Variant who is killing TVA agents and taking Time Reset Charges. He needs Loki's unique perspective because the variant they are looking for is Loki.

Salina, Oklahoma 1858. The Loki Variant has once again killed Minute Men and taken the Time Reset Charges. The weapon they find is from the early third millennium. Who else comes from that time? Kang The Conqueror. 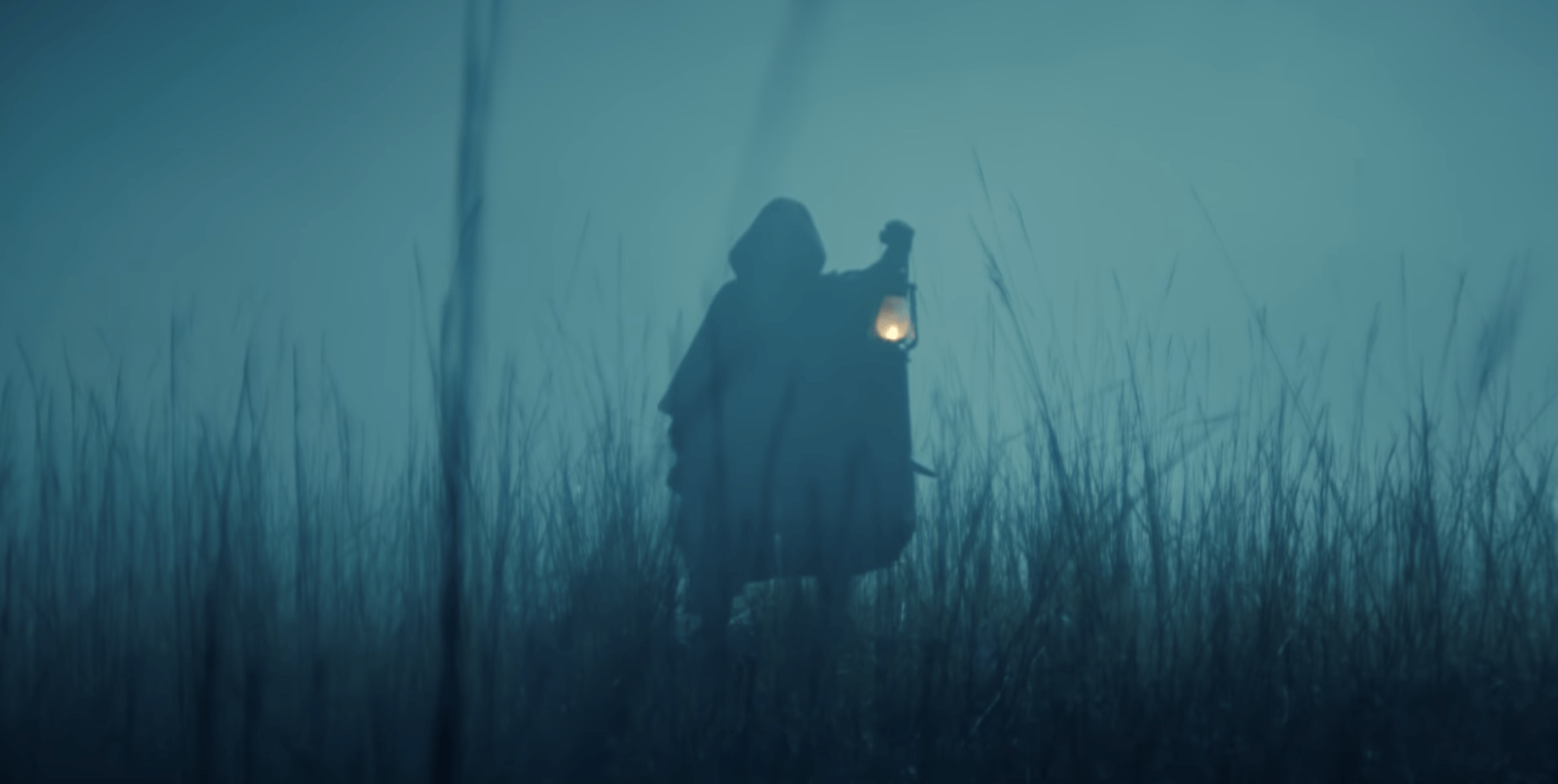 Loki episode 1 is now streaming on Disney+. See a new episode every Wednesday only on Disney+.

137 shares
Previous Post: « Loki Review: As Brilliant, Fun, and Mischievous As Loki Himself
Next Post: Behind the Scenes of Loki With Tom Hiddleston, Kate Herron, & More »