The afterlife awaits for Steven and Marc, or does it? Whether they are dead or not, these two must find a way to balance their scales before they are doomed. To do that they must revisit key points in their past life and figure out how to move forward. Let's get into “Asylum” with this Moon Knight episode 5 easter eggs and breakdown.

This is your spoiler warning if you haven't watched episode 5 of Moon Knight.

A brief flashback reveals a traumatic moment from Marc's childhood. A young Marc is calling for help and his mother angrily tells him this is all his fault.

Taweret screams along with Steven and Marc, but Arthur's voice is heard telling him to calm down. Somehow, Marc is back in Harrow's office, bruised and bloodied. Or is it actually Jake Lockley? His nose is bandaged in this scene but in the others, it is not. His accent is slightly different and he seems more aggressive, something the Jake identity has proven to be in the show. Also he is sticking is jaw out. I think it's Jake sitting in that office at first. Then Marc, and later Steven.

Arthur tells Marc he did not shoot him and that he is just a patient at Putnam Medical Facility in Chicago, Illinois. In the comics, Marc's father, Elias Spector had him interned at Putnam Psychiatric Hospital when his dissociative identity disorder began to manifest.

Marc starts yelling about Arthur awakening Ammit and is injected with meds. Then he is back with Steven, talking to Taweret who reveals they are dead and now in the Egyptian Underworld, the Duat.

Taweret mentions there are many planes considered the afterlife, including the Ancestral Plane. That is the afterlife seen in Black Panther. She is there to guide them through to the afterlife.

Her boat was also seen in miniature form inside Gus' fish tank in episode 1.

She says they may imagine this realm as something familiar, a psych ward is new to her. Marc starts to think Dr. Harrow is right, he goes to open a door thinking Crawley will be there calling Bingo.

Instead, when Marc opens the door we see Anubis' scales and they are on a boat, sailing to A'aru. If Marc and Steven proved balanced they will spend eternity in the Field of Reeds. In the first episode, the little girl asks Steven about him he not being in the Field of Reeds and he replies he wasn't dead.

Taweret takes their hearts and places them on the scale to be judged against the feather of truth.

However the scales won't balance because their hearts are incomplete. She tells them to go back inside, revisit memories, and find out what is missing.

As they walk the hallway, different moments from the show are seen. Episode 1 when Marc takes over the body and Moon Knight kills the jackal in the restroom. Then, Episode 3, when Steven helps Khonshu change the sky. Finally a shot of Marc on a street, but he refuses to elaborate on what happened. Steven then hears the boy calling for help from the beginning.

This episode also features a QR code for a free Moon Knight comic. 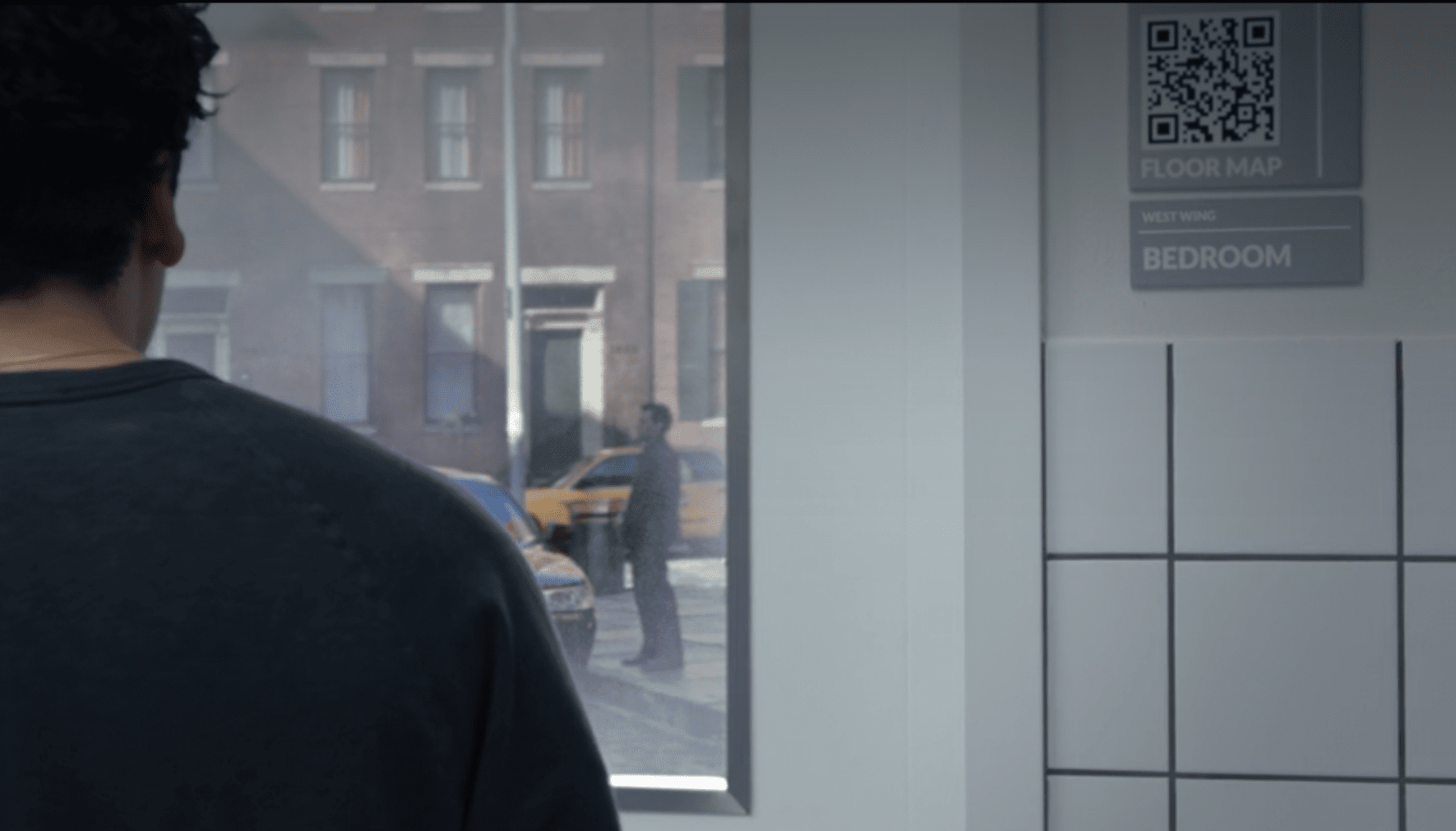 In this room, dead bodies are sitting around the tables. The scale continues to sway as Marc walks around calling out where these people were killed. They were all killed by Marc for Khonshu. Like Bucky Barnes, Marc remembers each one.

Throughout the door, Steven sees his mother Wendy is cooking and his little brother Randall (RoRo) drawing a picture.  Steven recognizes her as his own mother. He doesn't remember having a brother though. Marc asks Randall if he wants to go to the cave, they run off. Their father, Elias, is building a playhouse. Marc says laters gators to his mom.

As they walk away, they decide to play Tomb Busters. Marc is Dr. Grant and Randall is Rosser.

The camera switches between Marc, running through the hospital trying to get to Steven and Steven desperately trying to get the boys out of the cave before it's too late. Marc sees his mother at one of the doors. He and Steven meet up again at his parents house as the family mourns the death of RoRo.

Bones of a dead bird, that look a little like Khonshu and like the drawing from the last episode are on the ground.

Steven watches as young Marc celebrates birthdays with his father, his mother continually bringing up RoRo and blaming Marc for his death. On his 12th birthday he runs to his room, Marc stops Steven from following him.

Outside, they see Marc saying goodbye to his father, leaving because he cannot stand the abuse at his mother's hands anymore. Steven doesn't understand why Marc remembers her like this.

Marc tackles Steven and they land in the sand, the night Layla's father was killed and when Marc almost died. He mentions that Bushman killed everyone despite Marc trying to save them all.

They witness when Marc met Khonshu and was saved by him.

“I am the god Khonshu, in search of a warrior to be my hands, my eyes, my vengeance.”

They hear baboons and are back again with Taweret. She tells them souls are being judged unjustly and it's throwing off the balance of the underworld. She buys them some time to stop Harrow. Marc refuses to go to that room from earlier with Steven and suddenly he is back in Harrow's office. Arthur encourages him to open up to Steven.

Marc and Steven are in the bedroom, Marc's mother is angrily banging on the door and Marc starts to panic. Suddenly he blacks out and Steven makes his first appearance in Marc's life. This explains why Steven doesn't remember having a brother since Randall is already dead.

In the bedroom there are spaceman toys. This is a reference to one of Marc's unnamed comic identities, the astronaut from Lemire's run. There is also a toy scale in the room. You can also see a picture of the one-finned fish Randall was drawing. 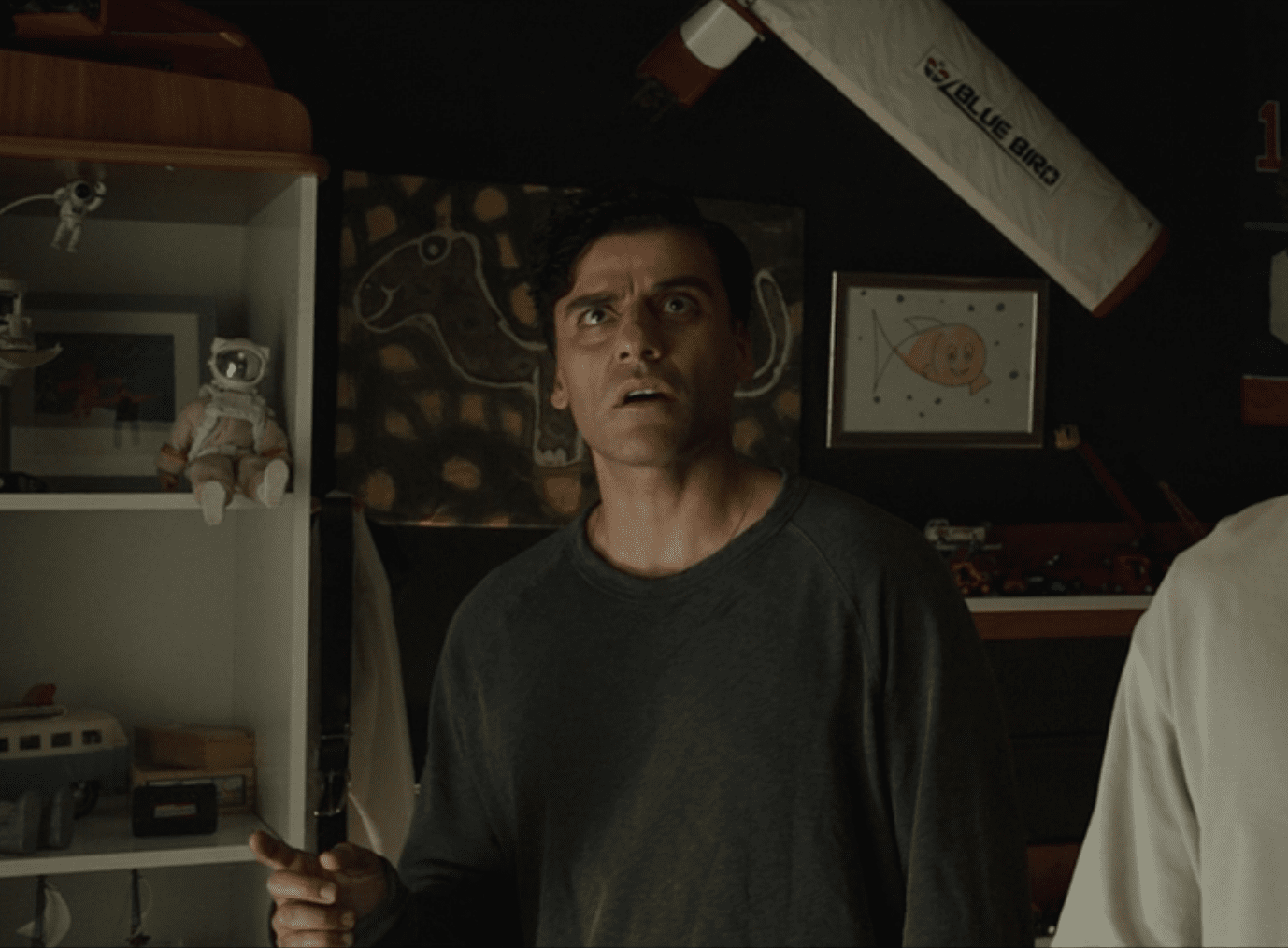 “When danger is near Steven Grant has no fear.”

On the poster, Doug Perlin stars in Tomb Buster. Doug Perlin is a combination of Moon Knight creators Doug Moench and Don Perlin, who created him for his debut in 1975’s Werewolf By Night #32. Melissa Russell is an actress, producer, and wife of Moon Knight series creator Jeremy Slater.

Dylan Beck is an assistant production coordinator on Moon Knight. Wyatt and Dylan Curtis could be relatives of Grant Curtis, Moon Knight's executive producer. Colleen Strzelewicz is the wife of Nick Pepin who works for Marvel Studios in production and development. Amy Sewart is the partner of director Aaron Moorhead. Noor Ikbal Molvi is married to writer Sabir Pirzada.

The film is made by Timely Atlas Studios. Both Timely and Atlas were former names of Marvel Comics. 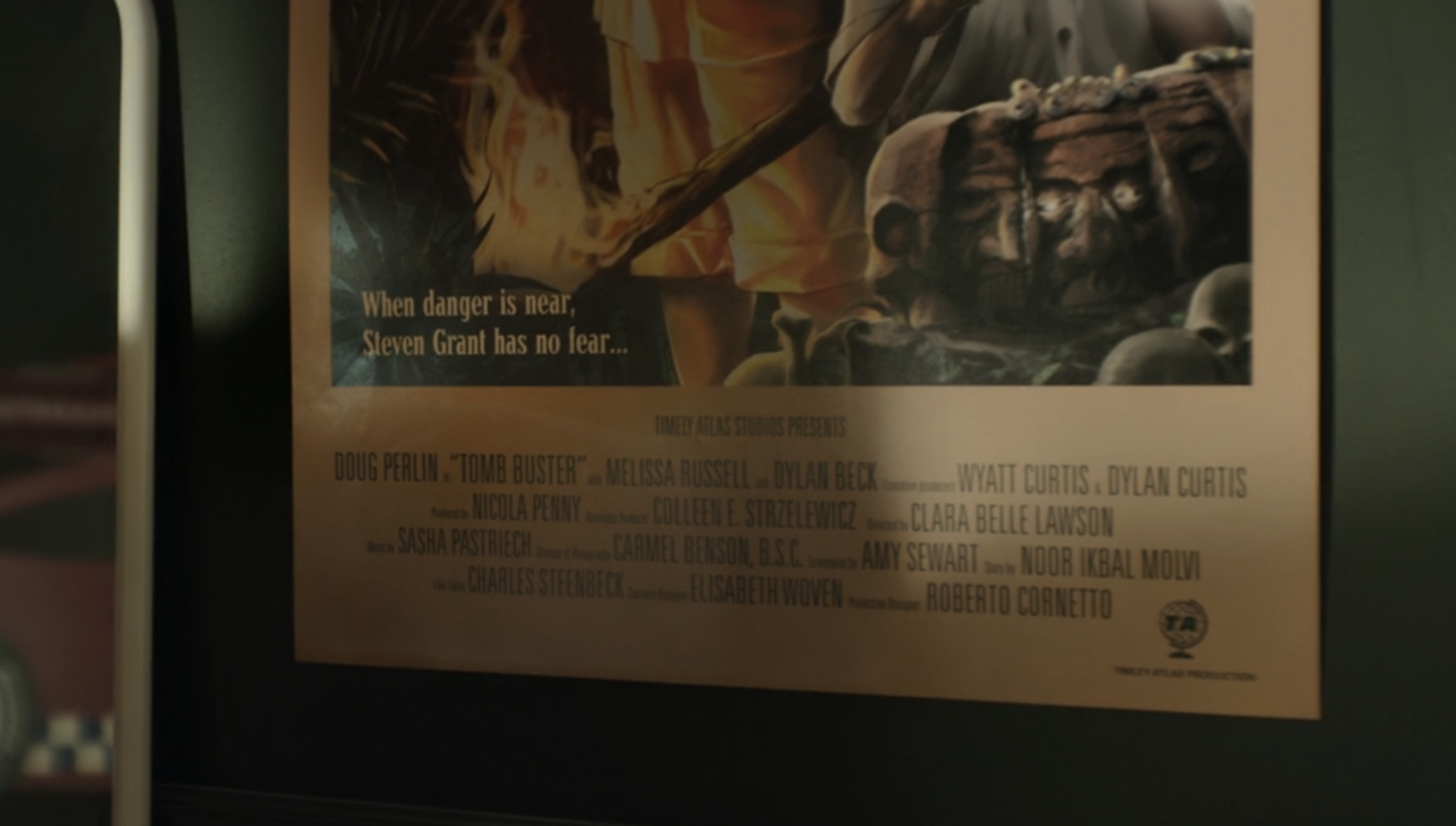 Marc reveals their mother is dead. Steven freaks out because he realizes he was made up by Marc. Then Steven wakes up in Harrow's office. Arthur speaks to Steven as if Marc was the one not telling the truth and that Steven is the main one. He offers to call Steven's mother. Steven realizes his mother is dead.

As he stands on the street outside his parent's home, the building behind Marc says Waterson Food & Liquor. This is a nod to the co-executive producer of all the MCU Disney+ TV series so far, Trevor Waterson. 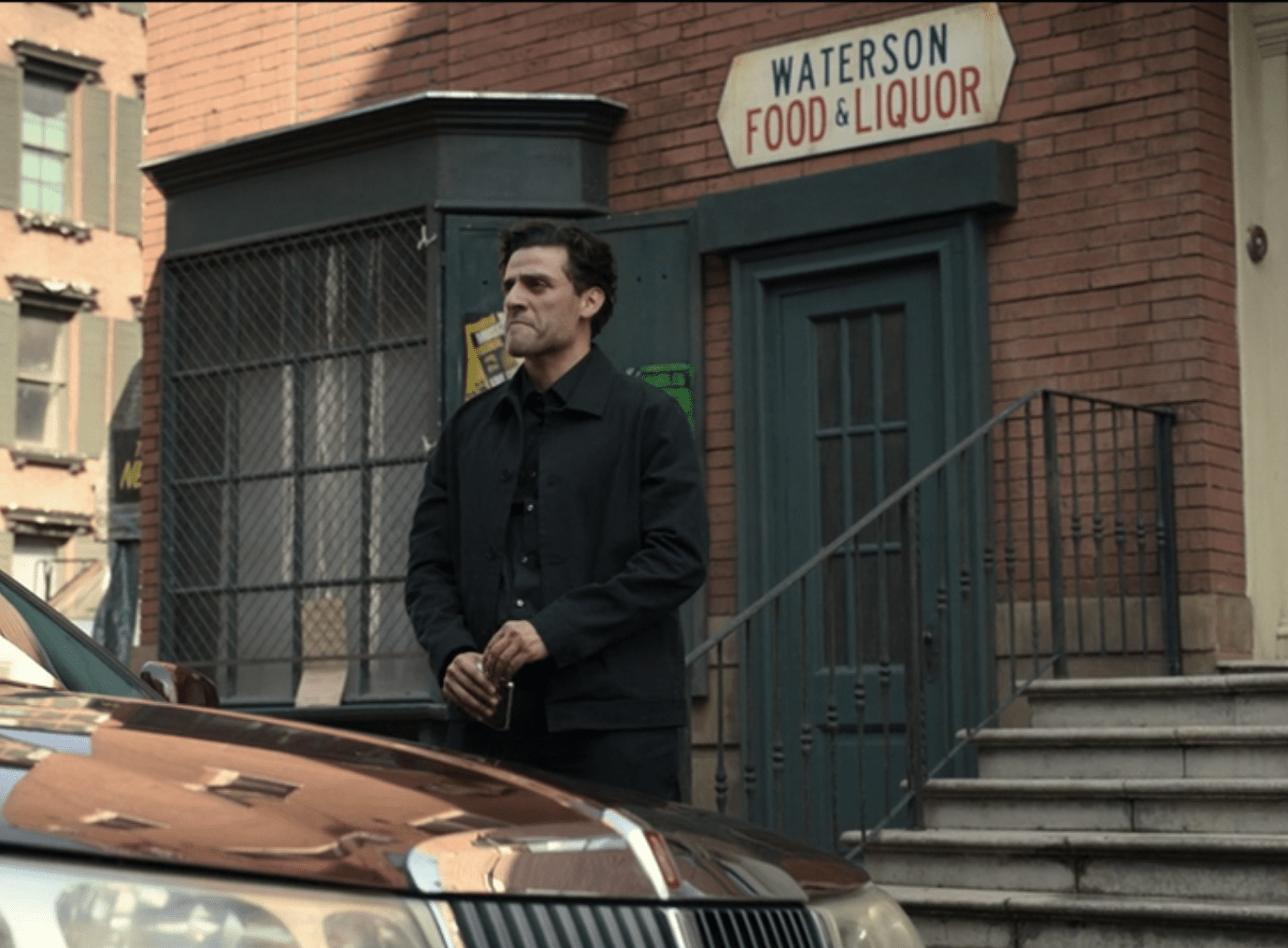 The street from earlier is shown, it's the day of Marc's mother's shiva, the day Steven and Marc's lives started to bleed into each other. A cab drives by, seemingly out of place, but it's another nod to Jake Lockley.

Because the scales did not balance, the unbalanced souls from Marc's past came to drag him off the boat. He and Steven fight them off but Steven falls overboard and is left behind in the sands. Marc's scales balance and he is left in the Field of Reeds.

Episodes 1 through 5 of Moon Knight are now streaming on Disney+.