The Savage She-Hulk is born with a retro intro. HulkKing is unmasked and Abomination and Hulk have a rematch a more than a decade in the making. So, let's get into “Whose show is this?” with this She-Hulk Episode 9 Easter eggs and breakdown.

This is your spoiler warning if you have not seen episode 9 of She-Hulk. 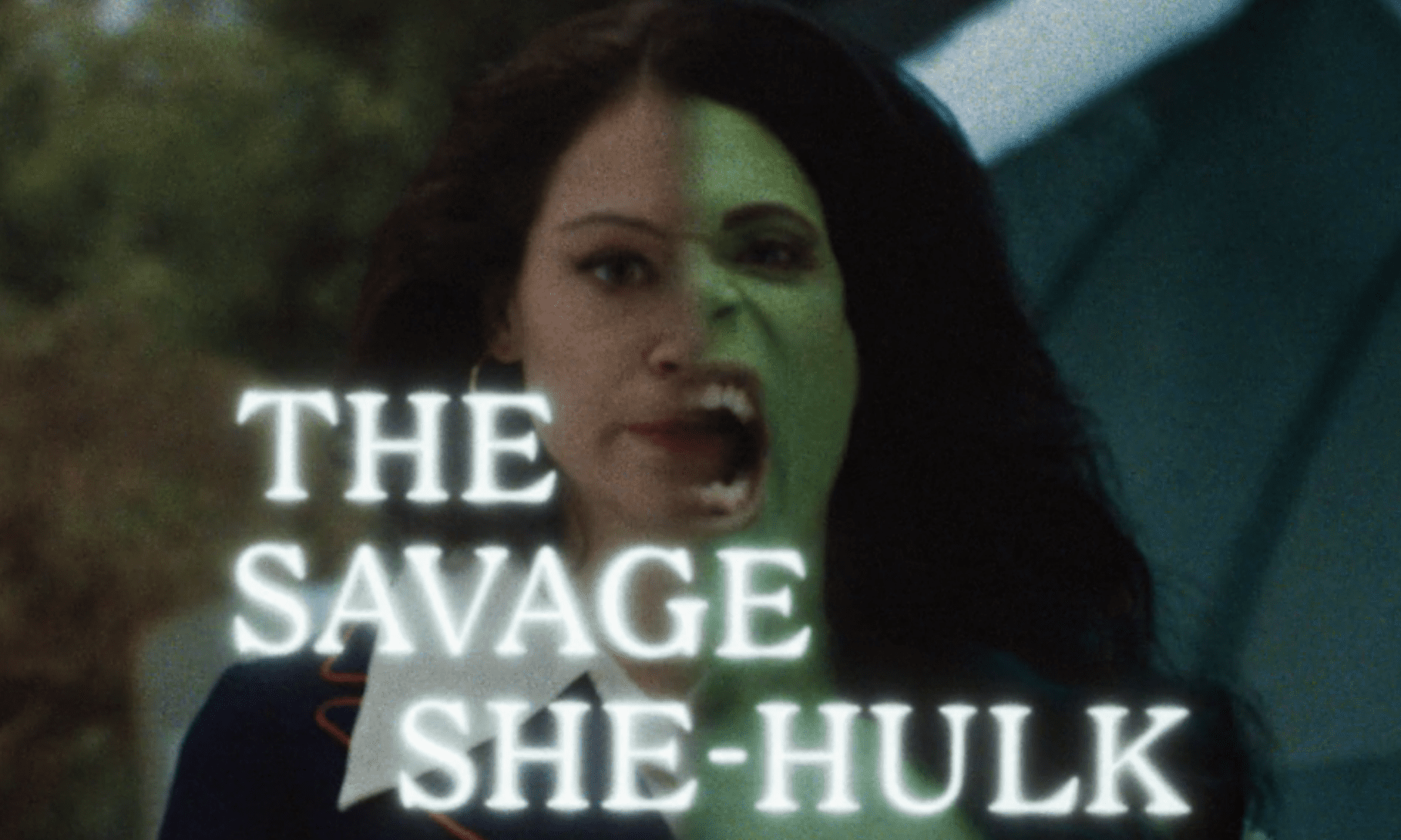 The show opens with an 80s style intro with a narrator explaining what happened to Jen and how she rages. The narrator does sound like The Watcher, Jeffrey Wright.

This includes the shot of her and Bruce standing together from the promo pictures. Jen tells the camera “don't make me angry. You wouldn't like me when I'm angry.” It ends with her being labeled the Savage She-Hulk, the name of the comic run that introduced the character to Marvel comics.

Jen awakens from a bad dream (the narrator segment) in the same type of cell Emil Blonsky was in at the DODC prison. Mallory Book, Nikki, and Pug have come to visit her. They called Bruce and left messages.

The DA won't pursue charges but Jen has to agree to wear an inhibitor bracelet just like Blonsky.

GLK&H fired Jen. Every news channel is talking about her and reporters have surrounded her house.

Jen moves back in with her parents. In her old bedroom there is a poster for Legally Blonde on the back of the door.

On the wall by the bed, you can see a poster for Erin Brockovich, Midsummer's Night Dream, and the Backstreet Boys Black & Blue album.

Nikki comes over and tries to help Jen figure out who runs Intelligencia.

Bukowski, the lawyer from Jen's old law firm, is giving an interview claiming he dated Jen. He claims she was psycho before she got her superpowers.

As Jen reflects on the fact she no longer has powers, the narrator's voice is heard again. Jen can also hear him. She texts Bruce (Smug Hulk) but it isn't delivered. Then she texts Emil and it doesn't go through either. She decides to go visit Emil.

Nikki uploads a video Jen's mom sent her from Jen's college days on Intelligencia. HulkKing messages Nikki inviting her to a private event tonight. She asks Pug to stand in for her because she has been pretending to be a guy.

Jen arrives at Emil's place and is greeted by Wrecker who sets up a room for her. Jen reads some of Emil's book Deep Haikus.

Pug and Nikki arrive at the party, it's at Emil's Ranch. The event also has his merchandise with Abomaste on it.

One of the men also brings up Lady Thor.

Todd Phelps is also at this event and recognizes Pug. Everyone starts bashing She-Hulk. Todd reveals he is HulkKing and that he created Intelligencia.

Wrecker tells Jen, Emil is down in the lodge for a special event. Todd introduces Abomination as their special guest speaker.

Jen is shocked Emil can transform into Abomination. He tells her he only does it for speaking engagements aka profit.

Pug and Nikki tell Jen who Todd really is. Todd injects himself with Jen's synthesized blood. He hulks out and Jen wonders is this where the season was really going?

Titania busts through the wall. Abomination saves Jen as the guys attack her. The Smart Hulk crashes the party.

Jen continues to question why all this is happening as Hulk fights Abomination. Then the screen shifts back out to the Disney+ Marvel menu. Jen breaks her inhibitor chip and puts herself into Marvel's Assembled section.

She-Hulk lands backstage in her superhero outfit. A guy is talking about the Infinity Gauntlet. While another mentions the first Thor movie.

She walks out of the soundstage, through the Disney Studios Burbank Lot, the Mickey Mouse water tower can be seen, casting, The Partners Statue in Legends Plaza, and finally into the She-Hulk soundstage. 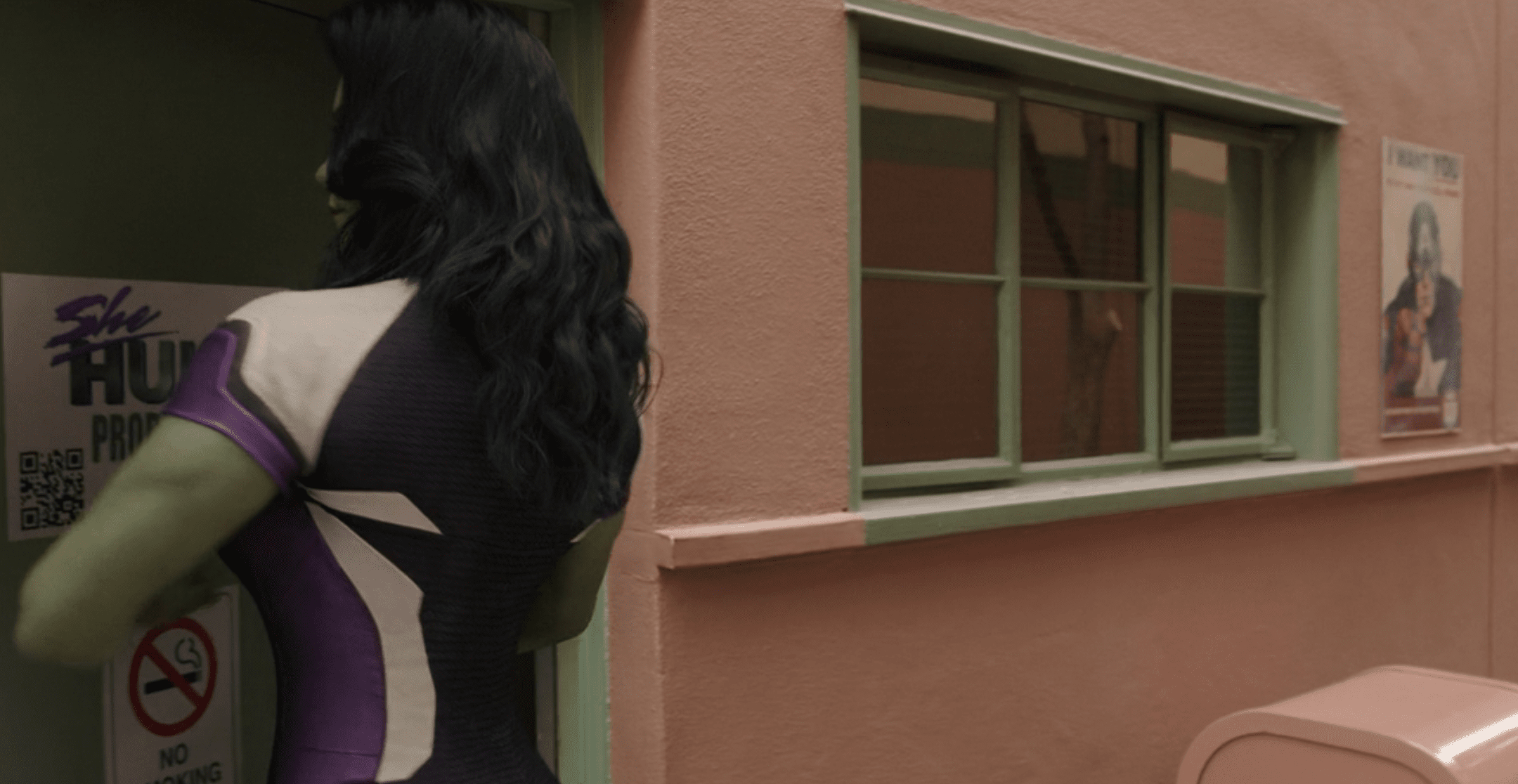 There is a QR code for a FREE She-Hulk comic on the door and a poster of Captain America on the wall.

She-Hulk walks into the writers' room. One of the writers is named Jessica after  Jessica Gao, head writer for She-Hulk.

Another Captain America poster as well as storyboards from the season can be seen. They are discussing season 2.

She-Hulk argues with the writers about how the finale is going. She wants to talk to KEVIN. They all laugh and tell her it won't happen.

She goes upstairs to the Marvel Studios offices. Iron Man Suits are on display behind her as she signs the NDA. Security guards try to stop her as she looks for Kevin. One of them is thrown into a picture of Mjolnir.

She-Hulk makes it into a room with multiple screens. The Marvel Studios fanfare can be heard while various MCU scenes play out including Thor Ragnarok, Captain America Civil War, Infinity War, Endgame, Avengers, Black Panther, and Age of Ultron.

Bruce is heard talking “That's my secret Cap. I'm always angry.” This is a quote from the first Avengers movie.

Kevin appears. Not Feige, but K.E.V.I.N – Knowledge Enhanced Visual Interconnectivity Nexus. He will answer her questions but only after she goes back to Jen because CGI is expensive.

K.E.V.I.N. mentions the special effects team has moved onto a new project, listen for the Wakanda Theme. 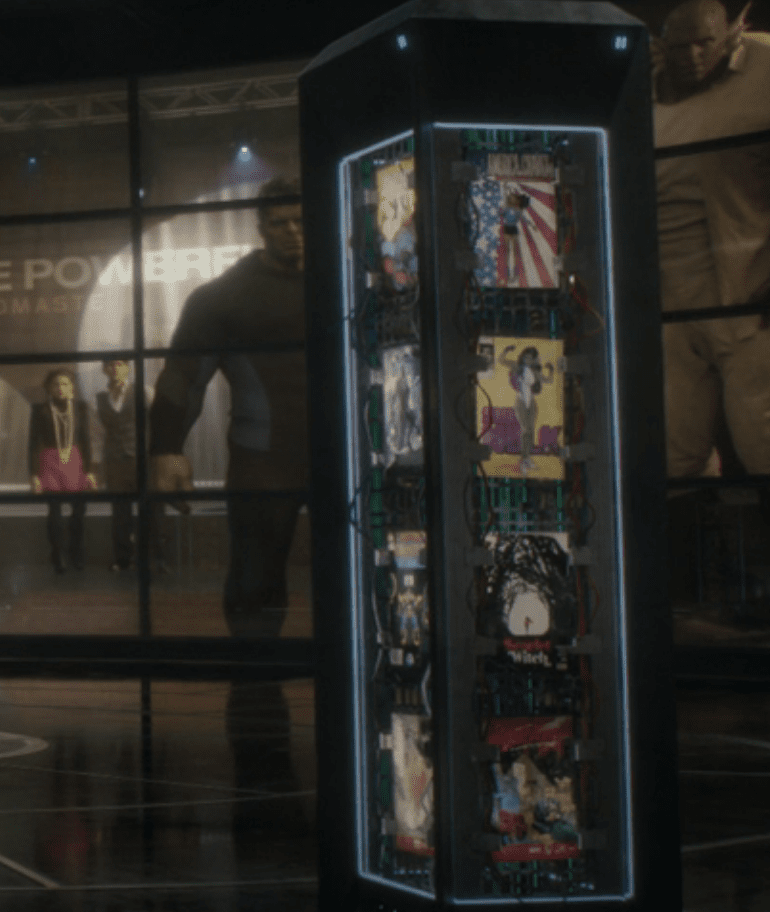 Lots of jokes about how this is KEVIN's show and that he leaves debates about perfection up to the internet. Also implies Kevin is an algorithm not a man. Love all of this by the way.

Jen gives her closing argument about why the finale needs to change. She questions the Marvel Cinematic Universe formula and says that it is distracting from her actual story, that her life is falling apart.

KEVIN listens to her ideas and gets rid of Todd having Hulk powers. KEVIN argues that Bruce was supposed to return to explain what he has been doing. She tells him to save it for the movie. World War Hulk??? She wants Emil to take accountability, the finale should be in the day time, and more Daredevil wouldn't be bad. 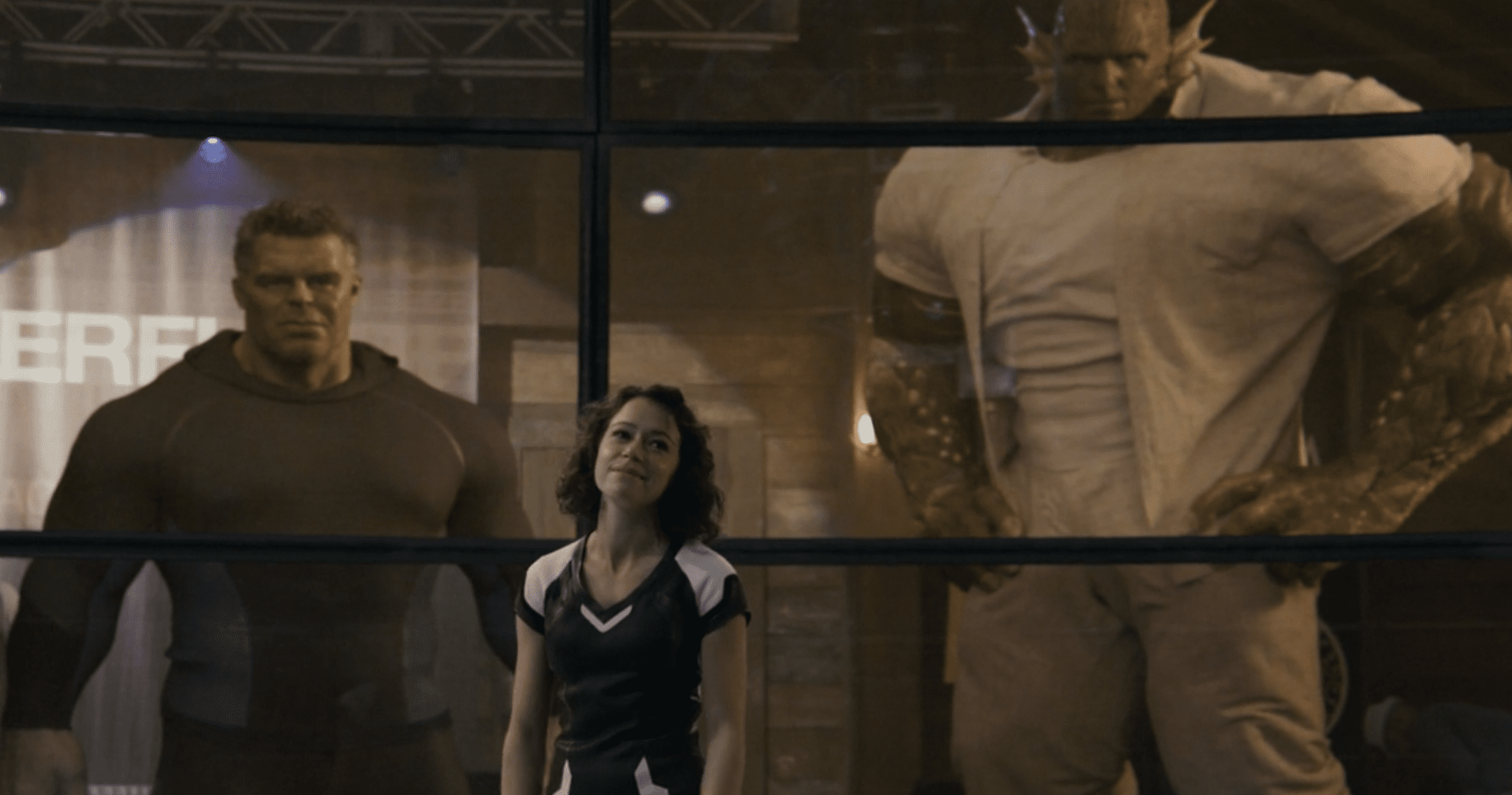 She then asks KEVIN what's with all the daddy issues in the MCU? Tony Stark, Thor, Loki, and Star-Lord. She then asks about the X-Men. He won't tell her but she also wants to talk about Season 2 of She-Hulk.

Jen returns to show and tells Todd she will see him in court. Titania is recording everything for her followers.

Daredevil shows up and you can hear his theme music.

At Jen's parents' house, Matt Murdock is eating with her family.

Bruce also shows up and reveals he has a son named Skaar. In the comics, yes Skaar is Hulk's son with Caiera the Oldstrong. He has both a human and Hulk form. At this point KEVIN or Kevin is really teasing us with all these Young Avengers. In the show Skaar is played by Wil Deusner.

Skaar's powers include: old power that allows him to manipulate the earth/stone/etc of a planet, super-human strength and stamina, regenerative healing powers, almost completely invulnerable, suspended aging, and transformation. He is also a skilled weapons master.

Emil Blonsky is back in his prison cell at the DODC. Wong appears and takes him back to Kamar-Taj. There is a joke about Wong being late because he was sucked into another show. Wong jokes we are in an era of peak tv. The meta joke her is obviously that Wong is every where the MCU now.

Emil also asks about Wifi which is equally meta because one in the first Doctor Strange, Mordo gives Strange the wifi password because they aren't savages. Two, Emil didn't have wifi at his ranch because of the distractions it causes.

All episodes of She-Hulk: Attorney at Law season 1 are now streaming on Disney+