This week's episode of WandaVision was absolutely heartbreaking. If I thought last week's made me cry a lot this one got me even more. Everything comes to a head and with the sadness comes some hope for the future and tie ins to several upcoming Marvel shows. Let's do a breakdown of “The Series Finale”and look at the WandaVision episode 9 Easter eggs.

Spoilers ahead if you haven't watched WandaVision episode 9. 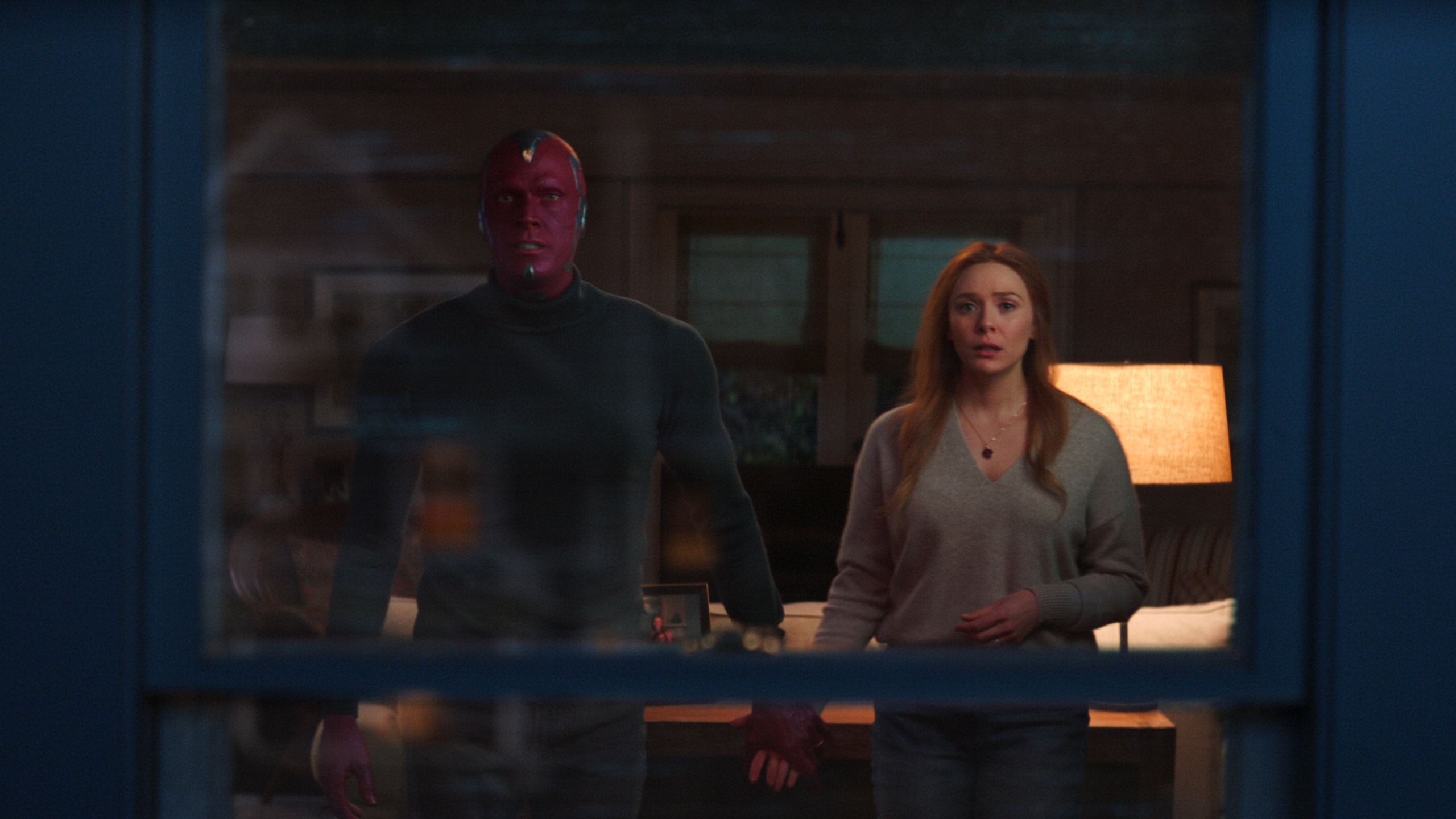 Agatha and Wanda stand off in the street with Wanda reminding her that her power does in fact work out here. But Agatha was counting on that as she wants to take Wanda's powers like she did with those in her coven. Wanda's hand begins to turn black as the power is taken from her.

Wanda drops a car on Agatha in a hilarious Wizard of Oz callback. When she investigates the wreckage we see Agatha's shoes but unlike the Wicked Witch of the East, she doesn't simply curl up and disappear. 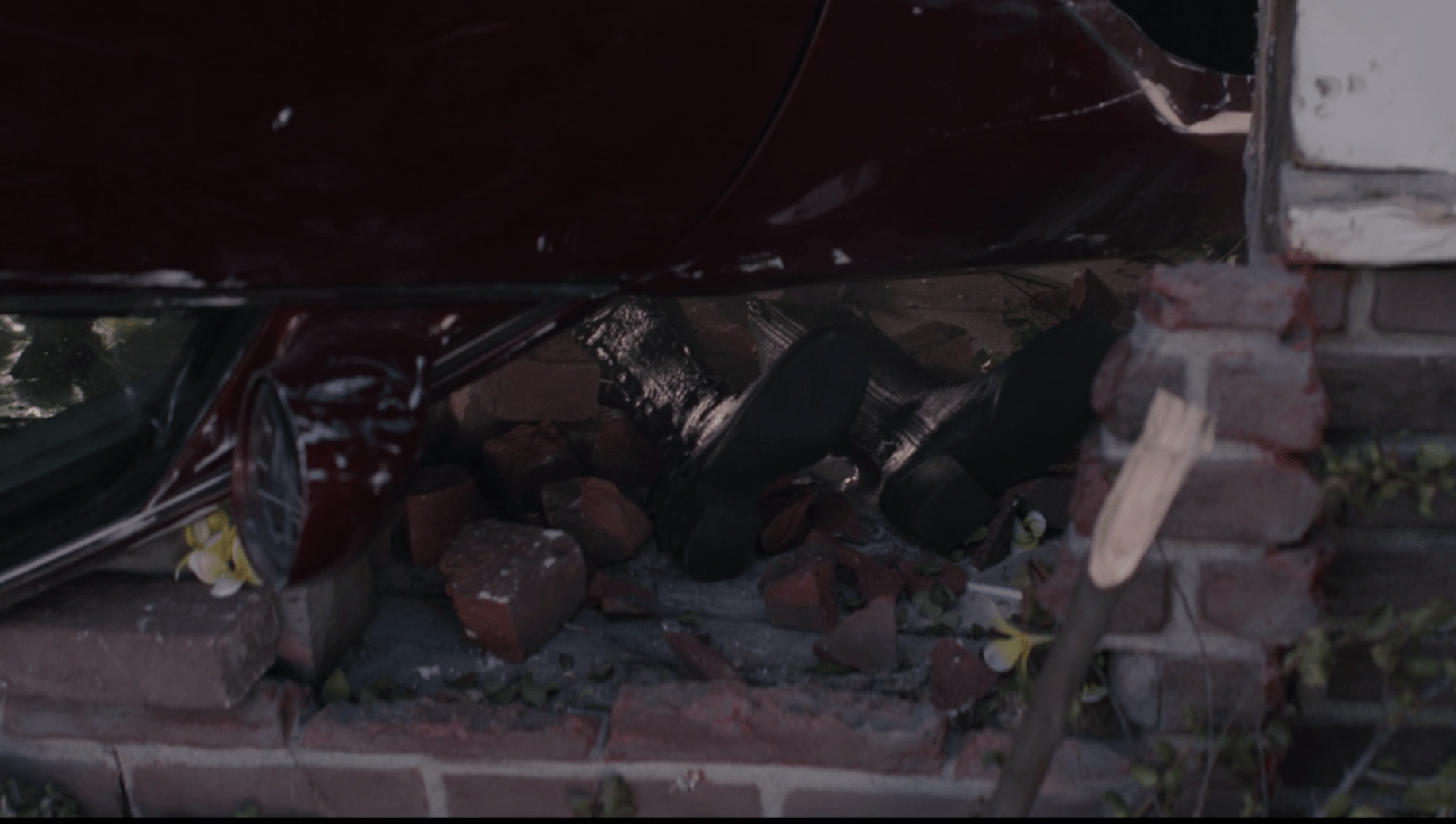 Card tricks aren't the only ones Jimmy Woo has learned since we last saw him in Ant-Man and the Wasp. He has learned to bluff, use slight of hand to take a cellphone without anyone noticing, and get out of his handcuffs. 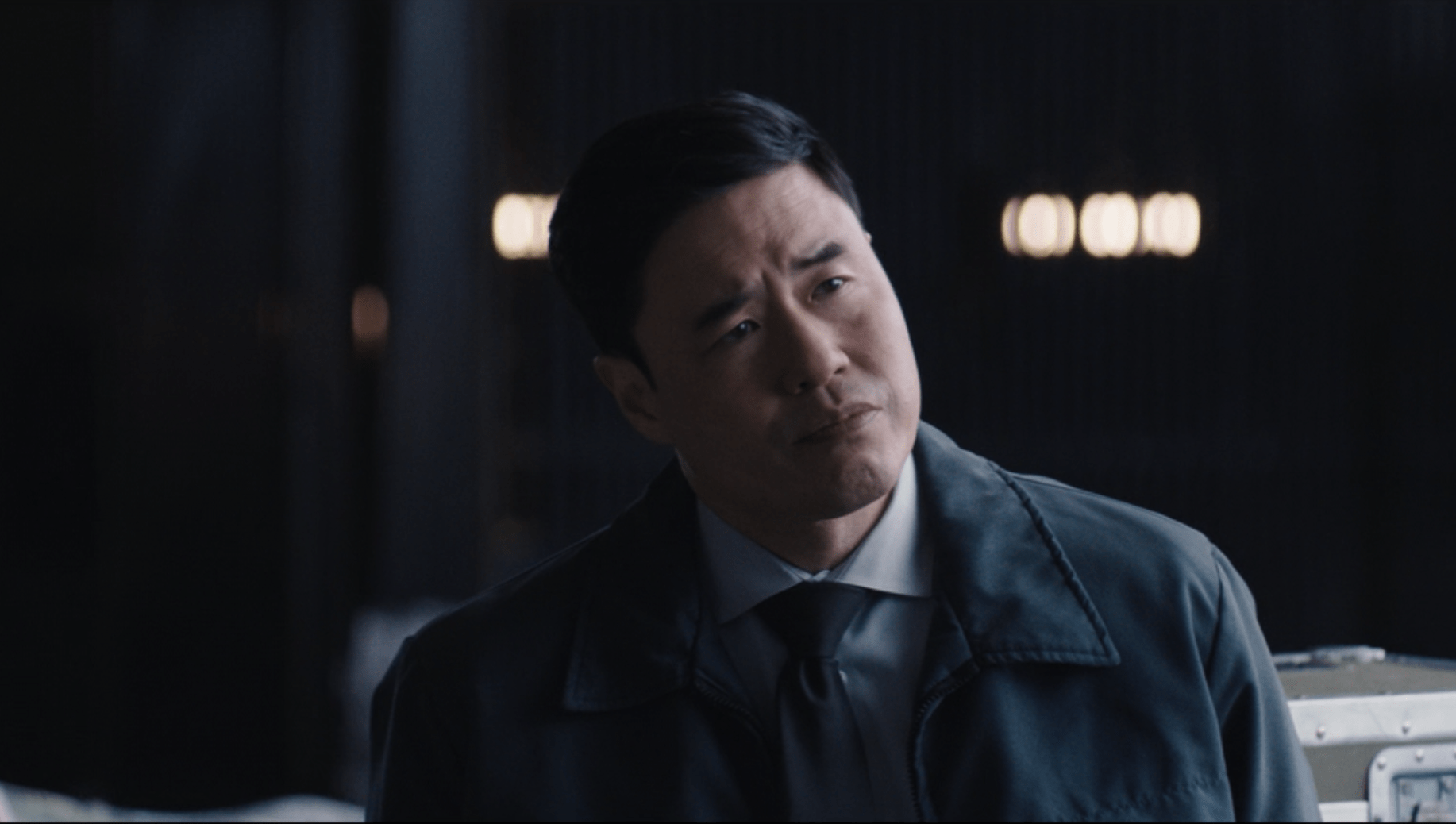 Jimmy calls the FBI, speaking to an agent named Cliff. We don't get a major reveal of who Cliff is but in the comics Cliff Randal is part of an alien race, the Collective Intelligence, from another dimension who end up on Earth after escaping a doomsday device. Some of the Collective chooses to stay hidden but others including Cliff disguise themselves as humans. Cliff ends up working with SHIELD and helps to defend Earth when the Collective Intelligence decides it wants to destroy the planet in order to get home. All of that could tie into the upcoming series Secret Invasion.

Wanda confronts Agatha in the town square where the latter confirms the book is The Darkhold, the book of the damned. And it contains a whole chapter devoted to the Scarlet Witch. It also states her power exceeds that of the Sorcerer Supreme and that she is destined to destroy the world. No doubt that will play a big role in Doctor Strange in the Multiverse of Madness.

Agatha “cuts the strings,” like Ultron did in Age of Ultron, of the people in town who reveal the trauma they have been facing unbeknownst to Wanda. Children stuck in rooms (like Pietro mentioned), families separated, and nightmares that plague their sleep.

Fietro has Monica in his man cave which looks like a college dorm room. He is revealed to be Ralph Bohner, the elusive Ralph Agatha has referred to throughout the series. Agatha has been controlling him and likely giving him the super speed power through a necklace. Monica frees him.

The room is very similar to the basement Peter Maximoff lived in when Magneto and Professor X came to visit. Though no arcade games there are video games, sports decor, and even a retro TV. 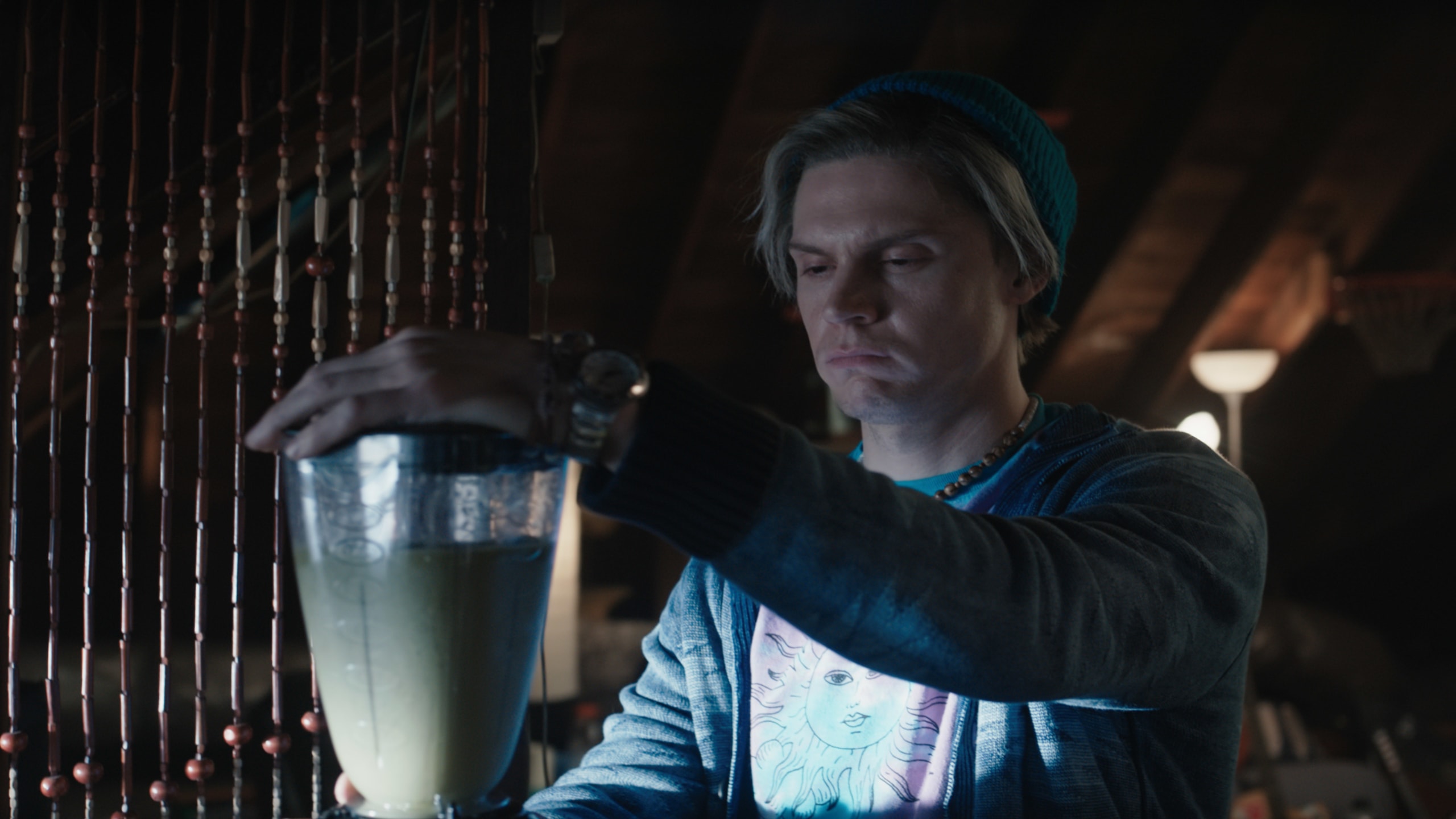 Billy senses something is wrong with their mother and the kids leave to help her.

Wanda realizing that she is hurting the people of Westview uses her powers to open the hex so they can escape. Unfortunately this also allows Hayward and SWORD a way to get in.

While the hex is coming down, White Vision and Vision continue to battle. But since Vision is tied to the hex he begins to lose power and come apart.

Wanda realizes that by bringing the hex down she will lose Vision, Tommy, and Billy as they all begin to break apart right in front of her. Agatha tells her, one can't exist without the other.

White Vision, Agatha, and SWORD circle the family where they stand looking just like The Incredibles (one of the movies from the Halloween episode). Wanda takes on Agatha, Vision White Vision, and the boys get to show-off their super skills against the military.

White Vision says he was programmed to destroy The Vision which gives Vision a way to defeat him, through logic.

Wanda proves again she isn't the bad guy she has been made out to be when she saves the SWORD agents from Agatha.

Billy grabs their minds while Tommy speeds around like his Uncle Pietro to disarm them and take a hat.

Hayward being the d…. bad guy that he is attempts to shoot the twins but Monica steps in and along with Billy stops the bullets. Showing off another teaser of her power.

And being a coward, Hayward tries to flee the scene of the crime but is stopped by Darcy who tells him to have fun in prison.

Vision is able to get through to White Vision by using the philosophical debate about the Ship of Theseus. It is a thought experiment that raises the question of whether an object that has had all of its components replaced remains fundamentally the same object. This paradox essentially parallels what is happening with Vision, They are in fact both The Vision.

Vision unlocks the data, the memories that have been stored within White Vision, all of Vision's memories come flooding back to the point where he died in Avengers Infinity War. White Vision, knowing he is Vision leaves Westview and isn't seen again.

Wanda uses her mind powers on Agatha like she did on the Avengers in Age of Ultron. They are transported to Agatha's nightmare, the night she killed those in her coven. The witches are reanimated but then turn on Wanda as they know who she is- The Scarlet Witch. She is bound to the pole and her headdress begins to appear on her head.

Agatha promises to fix the spell so that Wanda and her family can live out their lives in the world she created but Wanda must surrender her power.

Wanda breaks free and they fight in the sky of Westview. Wanda throws everything she has at Agatha, who absorbs it. Wanda appears drained, almost like a corpse as Agatha goes to make her final move. But her powers don't work because Wanda put runes around the hex nullifying Agatha's powers.

Taking back the powers Agatha stole from her and more, Wanda transforms into The Scarlet Witch.

Wanda shows mercy on Agatha, transforming her back in the nosey neighbor to live out her life in Westview. If she ever has need of Agnes again she knows where to find her. And she might considering Agatha warns Wanda that she has no idea what she has unleashed.

Vision and Wanda know that she can make everything right but not for them. And in the most heartbreaking scene ever maybe, Wanda and Vision put the boys to bed, saying goodnight and goodbye. Family is forever though. Billy seems to know what is going to happen, perhaps Tommy does too, but Billy we know has powers similar to Wanda's and can hear people's thoughts.

Wanda explains to Vision that he is the part of the mind stone that lives within her. He is her sadness and her hope, but mostly he is her love. Vision offers hope as they say goodbye. He mentions he was a voice without a body, a body but not human, and now he is a memory made real. “We have said goodbye before” yet they still find each other. With the Vision out there, there is a possibility they could be reunited one day.

She is left standing in the middle of the house's foundation where it all started. She knows the townspeople will never accept her apologies or her, but Monica does. She tells Wanda if she had the power to bring her mother back she would have done it too. Wanda vows to figure out her power.

Woo has assumed control of the Westview cleanup. Hayward is in custody and Darcy has left because debriefs are for the weak.

In WandaVision's mid-credit scene, a FBI agent asks Monica to come to the theater for a message. It is then revealed the agent is actually a Skrull who tells Monica “I was sent by an old friend of your mother's. He heard you've been grounded. He'd like to meet with you.” When Monica asks where, the Skrull simply points upward. This presumably means the Skrull is referring to Nick Fury, an old friend of her mother's who also the last time we saw him happened to be in space. It could also mean Talos and all of this will tie into Secret Invasion.

Wanda has secluded herself away from the world in a cabin. While she is making tea, her spectral Scarlet Witch form pours over the Darkhold, learning all she can about her powers. She's interrupted by the cries of help from Tommy and Billy. She thought they had ceased to exist when the hex came down, however it seems somewhere in the multiverse they are alive.

With the help of the Darkhold (and whomever possesses it) she will search for the boys which we will see play out in Doctor Strange In The Multiverse Of Madness. Oh and remember Vision is out there somewhere too.

The spectral form reading is also a callback to Doctor Strange when Stephen did the same thing attempting to learn everything he needed to know about becoming a sorcerer. Also, Doctor Strange's theme is also playing in this scene.

The mountain home is likely located in Wundagore, the place where she was born in the comics. It is also the same place where Chthon wrote the book and where the Cult of the Darkhold gathered to honor him.