Doctor Strange in the Multiverse of Madness is a bold, no holds barred jump into the multiverse and all the possibilities it contains. Director Sam Raimi’s signature style is on full display, making this visually unlike anything anyone has seen out of the MCU. It is a wild, sometimes terrifying ride that instantly draws you in and never lets go. Not only that it has some great Easter eggs for fans of the MCU and the comics to find. Which as you know is one of my favorite things to do, so here are all the Doctor Strange in the Multiverse of Madness Easter eggs and cameos you may have missed.

This is your spoiler warning if you haven't watched Doctor Strange in the Multiverse of Madness.

Doctor Strange In The Multiverse of Madness Easter Eggs & Cameos

Marvel Studios logo has been updated to include scenes from WandaVision.

America uses her power to travel the multiverse to rescue herself and Defender Strange.

When Stephen wakes up he puts on the watch with the broken face from the first Doctor Strange. It is the watch Christine gave him.

RELATED: Doctor Strange Credit Scene Explained: Who Was That?

Michael Stuhlbarg returns as Dr. West, who sits next to Stephen at Christine's wedding.

The Cloak of Levitation is in Stephen's jacket as a pocket square.

During the wedding reception, Stephen uses magic to fill Christine's glass with red wine. He gets beer for Thor in the same way in Ragnarok.

Gargantos is outside and after America Chavez. Gargantos clearly is more like Shuma-Gorath but had to be renamed due to licensing issues. And just like the beast in the other universe, this one is also covered in runes. 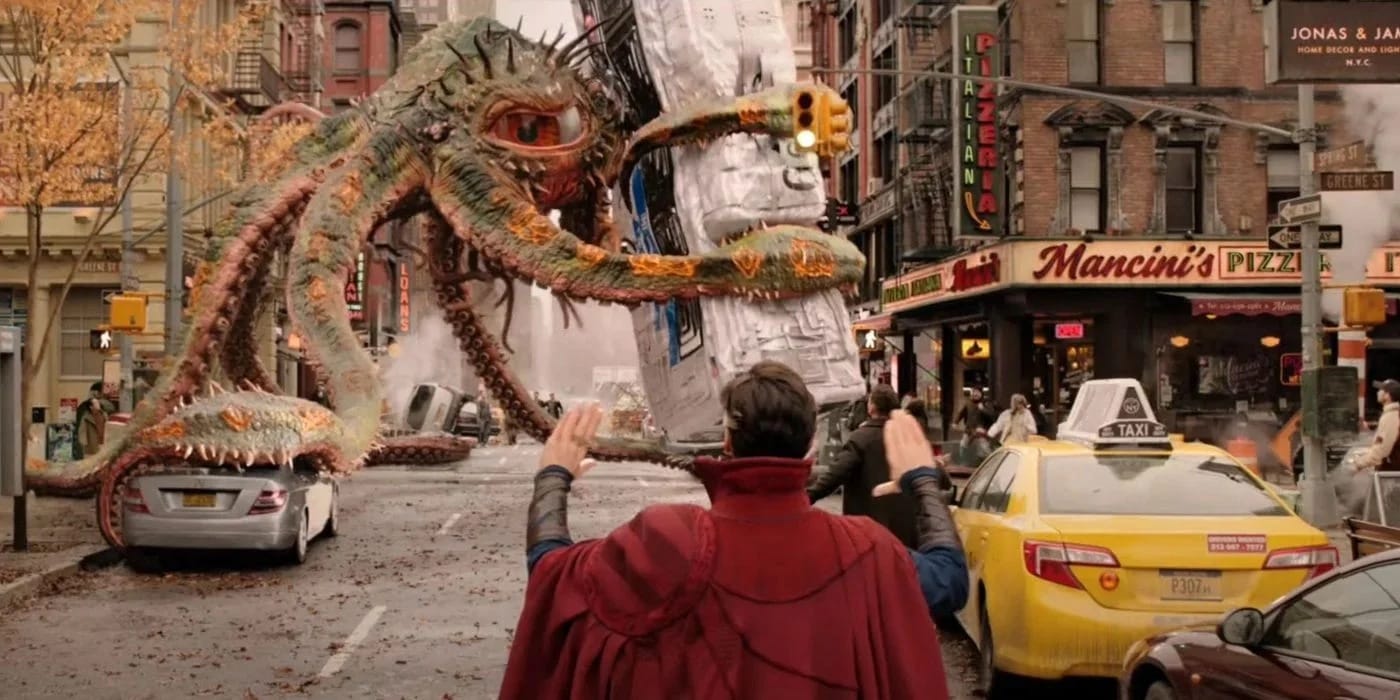 Writer Michael Waldron has a cameo. He is standing next to Charlie, watching the fight from the balcony.

Director Sam Raimi has a cameo. He runs by Strange on the street.

There is an ad for Celestial Seasonings Magic Tea. In the first movie, Strange wondered what the Ancient One had put in his tea.

At the pizza place, Strange and Wong reveal they know about the multiverse thanks to some dealings with Spider-Man. She wants to know if he shoots webs from his butt? This is a nod to the No Way Home scene when Tom Holland and Andrew Garfield tried to figure out if Tobey Maguire could shoot his webs from anywhere other than his arms.

They are after The Book of the Vishanti which contains the most powerful white magic spells known to sorcerers and is used to counteract other types of magic.

The rooftop of the Sanctum Sanctorum, the same place Hulk/Bruce Banner encountered the Ancient One in Avengers: Endgame.

When Strange mentions knowing someone who knows a lot about witchcraft, the WandaVision theme is heard playing. Wanda is dreaming of being with Tommy and Billy again. In their bedroom, there is science stuff on Billy's side of the room and car, speed related items on Tommy's side. 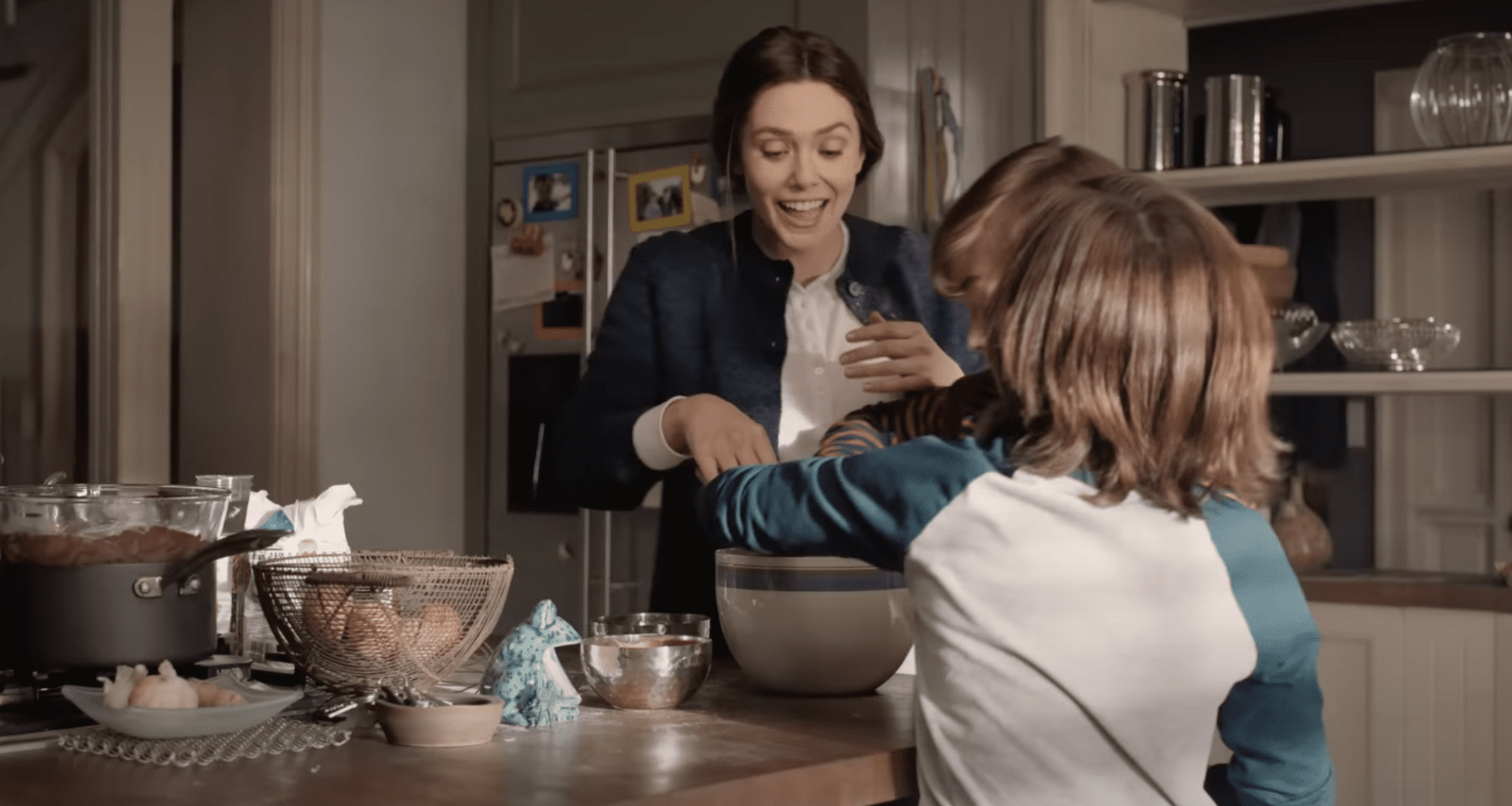 Strange mentions he doesn't want other Avengers to help: Hawkeye and bug-themed heroes.

In the orchard the boxes says Volkers. This could be a nod to Wendell Volker, someone who had a lot of interest in the Baron Zemo family line.

Wanda reveals she has been using the Darkhold, the book of Chthon. And with it she can hear her children calling out to her from another universe. She wants America's powers so that she can be with her children.

At Kamar-Taj, Hamir is still there training sorcerers.

The bull guy is Rintrah, in the comics he is from the planet R'Vaal and eventually becomes an apprentice of Doctor Strange.

Another universe looks like a Marvel cartoon. They eventually land in a universe that is similar-ish to the one Strange is from. Other universes include paint, prehistoric, underwater, and one with giant bees.

The version of New York they land in resembles the end of Free Guy when Guy lives in Free Life.

Bruce Campbell has a cameo as Pizza Poppa. He accuses Stephen of stealing the Cloak of Levitation from the Doctor Strange Museum. 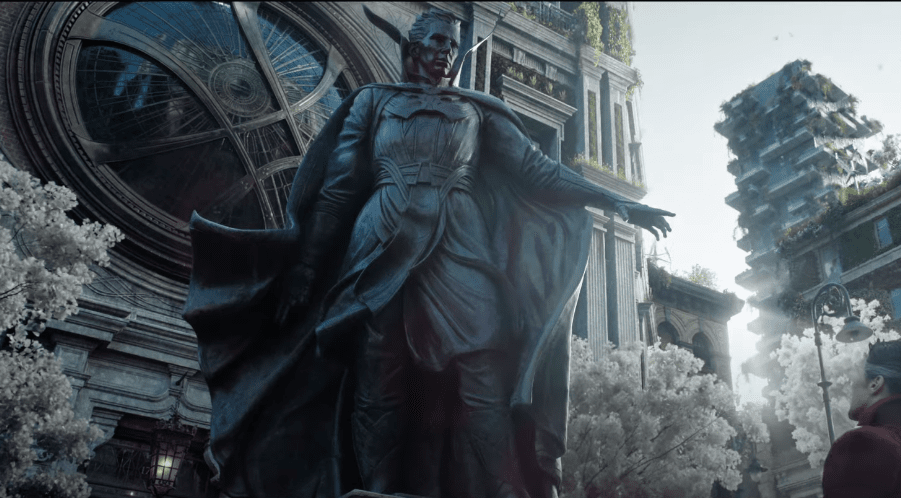 Standing in a memory sphere, Strange sees the date that Christine gifted him the watch that is broken. America sees the day she lost her mothers.

In this universe Doctor Strange died defeating Thanos and is called Earth's Mightiest Hero. Which is the tagline for the Avengers.

Mordo is the master of the New York Sanctum. He warns them about dream walking, where someone can take control of one of their variants and control that body as their own. Dream walking is not only a Marvel Comics power but is often seen in anime, manga, and other cartoons/movies.

America says “What was in that tea?” This is the same line Strange says in Doctor Strange when the Ancient One opens his mind to the multiverse.

Mordo had used the Sands of Nisanti to nullify Strange and Chavez's powers.

Meanwhile, Wanda has found another version of herself where her boys are alive. Tommy and Billy are watching Oswald the Lucky Rabbit. Oswald was created by Walt Disney before Mickey Mouse.

Wanda's dream walking is interrupted when the Darkhold is destroyed. She coerces Wong into telling her where to find the spells again. He tells her of Wundagore Mountain, the home of Chthon and the place the Darkhold was created.

The statues on the wall next to the Scarlet Witch are that of Billy and Tommy. She touches Billy's hand.

This universe's Christine works for the Illuminati and the Baxter Foundation. In the comics, the Baxter Building was the home of the Fantastic Four.

She tells Strange this is Earth-838 and that Stephen is from Earth-616. Why did this get a big cheer? Well Earth-616 is designated as the main storyline in the comics.

The bots guarding the Illuminati are Ultron Robots. Unfortunately James Spader is not providing the voice, it is actually Ross Marquand who has voiced other Marvel characters and was Red Skull in Avengers Endgame.

On Wundagore, the beasts, who resemble Chthon, bow to Wanda. The Scarlet Witch is engraved in stone in the throne room.

The Illuminati members are:

Xavier is using his iconic yellow wheelchair from the comics and the 90s cartoon. Speaking of, the X-Men cartoon theme can be heard in this scene.

In this universe Doctor Strange did the dream walking and caused the destruction of a universe thanks to an incursion. An incursion is when two “Earths” collide, resulting in the planets and their universes being completely destroyed.

In the scene Xavier shows him, Thanos can be seen dead and Strange has the same black finger tips that Wanda and Agatha have had in our universe.

Xavier tells Strange: Just Because Someone Stumbles And Loses Their Way Doesn't Mean They're Lost Forever. This is the same quote he says to his younger self in X-Men Days of Future Past.

When Wanda breaches the Illuminati's defenses, Strange quips “No Sh*t Genius” instead of No Sh*t Sherlock.

Reed Richards mentions his children. Their names are Franklin and Valeria. Franklin has reality warping abilities and is a very powerful hero. He was able to heal the multiverse after the incursion crisis. Valeria is a super-genius like her father.

When Wanda shows up to kidnap America, she faces all of the Illuminati. Captain Carter says I can do this all day as the Captain America theme plays. 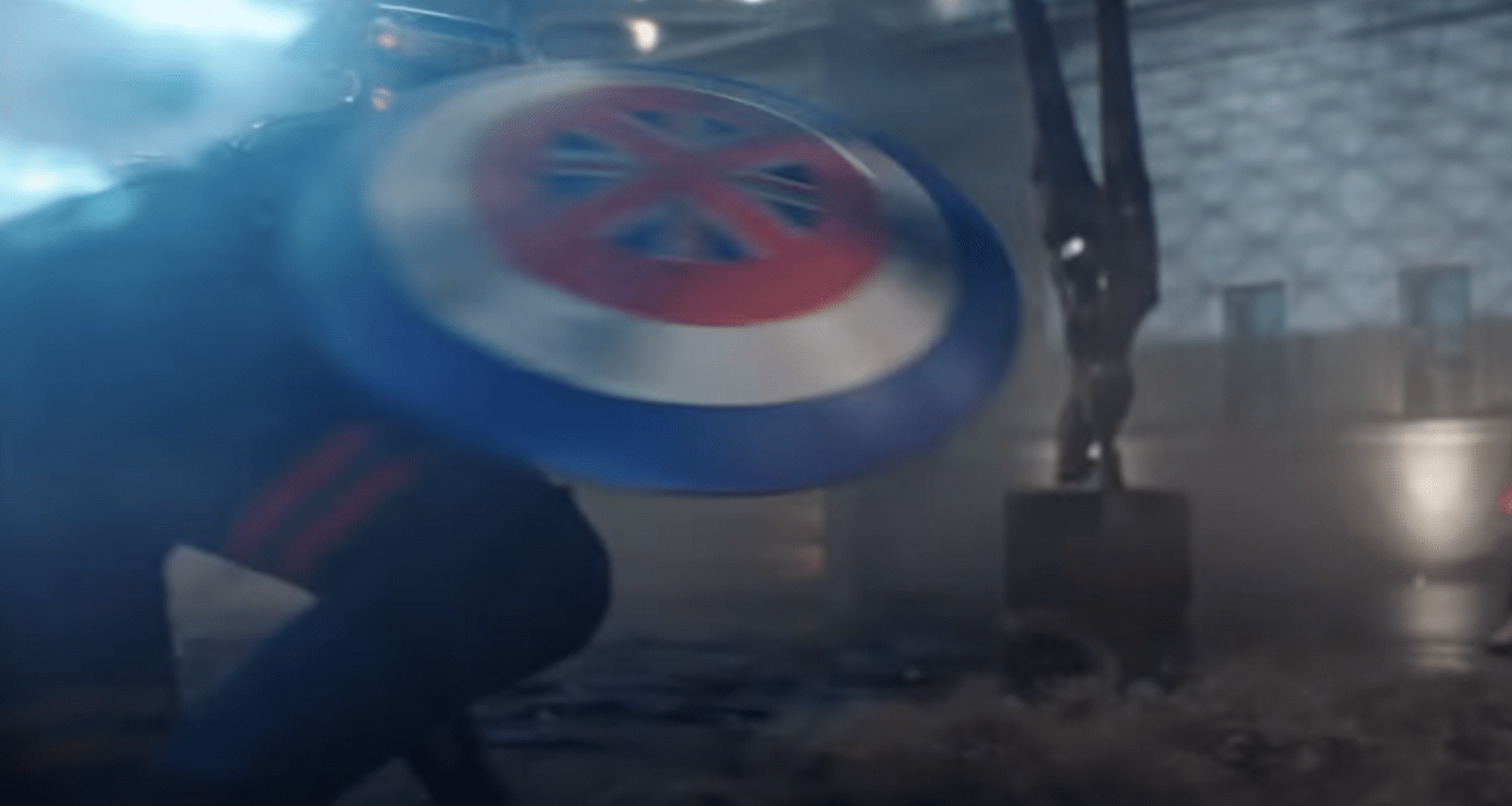 As Xavier attempts to rescue the trapped Wanda, an old TV sits in the rubble of her mind. WandaVision is playing on the TV.

Xavier is wearing a maroon turtleneck, something Magneto wore often.

Christine has fixed the Cloak of Levitation with a nice blue patch. Stephen uses his watch to open the gateway to the Book of the Vishanti.

Wanda destroys The Book of the Vishanti but as it burns you can see a page with America Chavez's star on it.

The Wanda being controlled by The Scarlet Witch sends America Chavez back to Wundagore and Strange to another dimension with a crumbling Sanctum Sanctorum. On the doors it looks like a nod to Mephisto, the devil who is in the details but hasn't been officially brought into the MCU yet.

There he meets Sinister Strange, who has a third eye and is the only being left in this world. 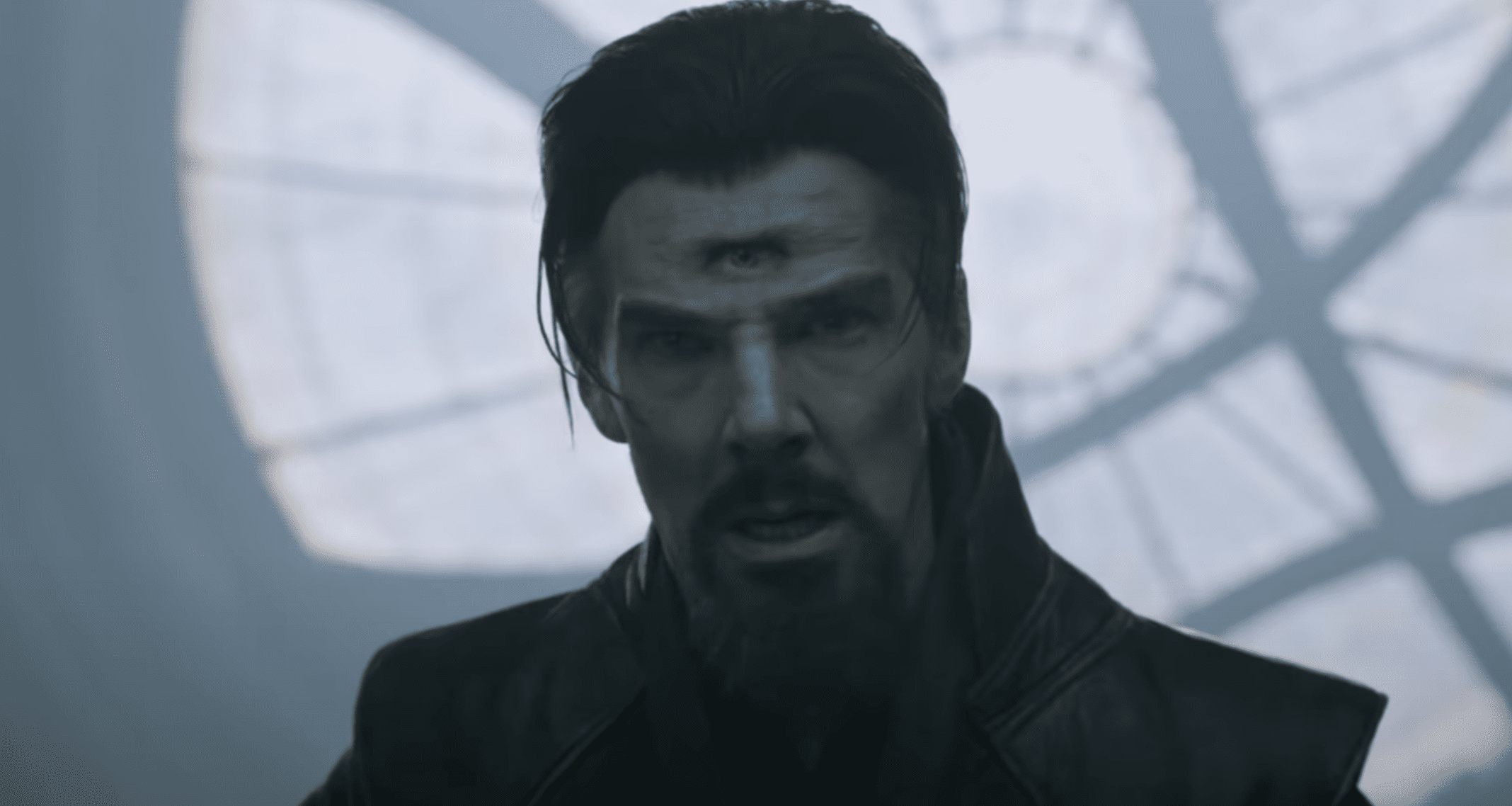 Stephen Strange reveals that he had a sister named Donna who drowned when they were children. Not being able to save her has haunted him and pushed him to be the best in the medical field. In the comics, Donna was Stephen's sister, and helping her made him want to get into medicine. As a teen she died due to drowning.

Christine fights off the spirits of the damned with the Brazier of Bom'Galiath. In the first Doctor Strange, Stephen grabs it when he is fighting Kaecilius. But he doesn't know how to use it. Apparently 838 Christine does. In the comics, Stephen uses it to hide Eric Masterson in Mephisto's realm.

Zombie Strange is able to use all the same spells as regular Doctor Strange, including a creepy version of the multiple arms. 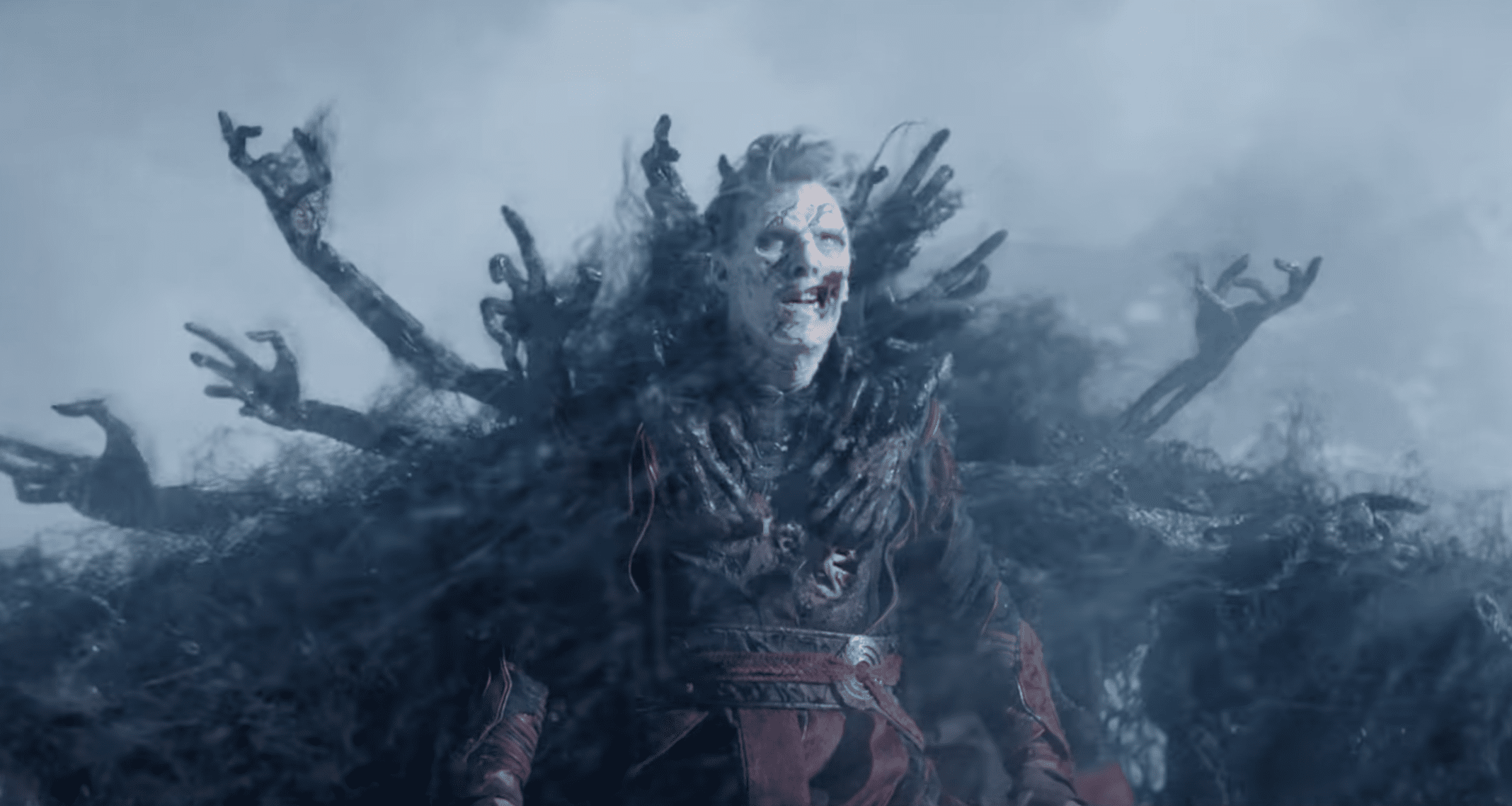 When America and Wanda fight, America uses her powers to show Wanda exactly what she wanted, her boys. Tommy and Billy are terrified of her though. Snow White and the Seven Dwarfs is playing on the TV.

Before she sees her boys though, she seems a realm that looks a lot like Hell.

Wanda  destroys Chthon's temple and every version of the Darkhold across all universes. A theory here is that by destroying the temple, she also released the spirits of Billy and Tommy that are alive in the 616 universe, they were just trapped in the stone of the temple.

America Chavez is training at Kamar-Taj. Wong tells Strange she reminds him of Stephen.

Stephen finally fixes the watch face and puts it away, signaling he is ready to move on with his life. Outside his building he gets a massive headache and a third eye opens on his forehead. 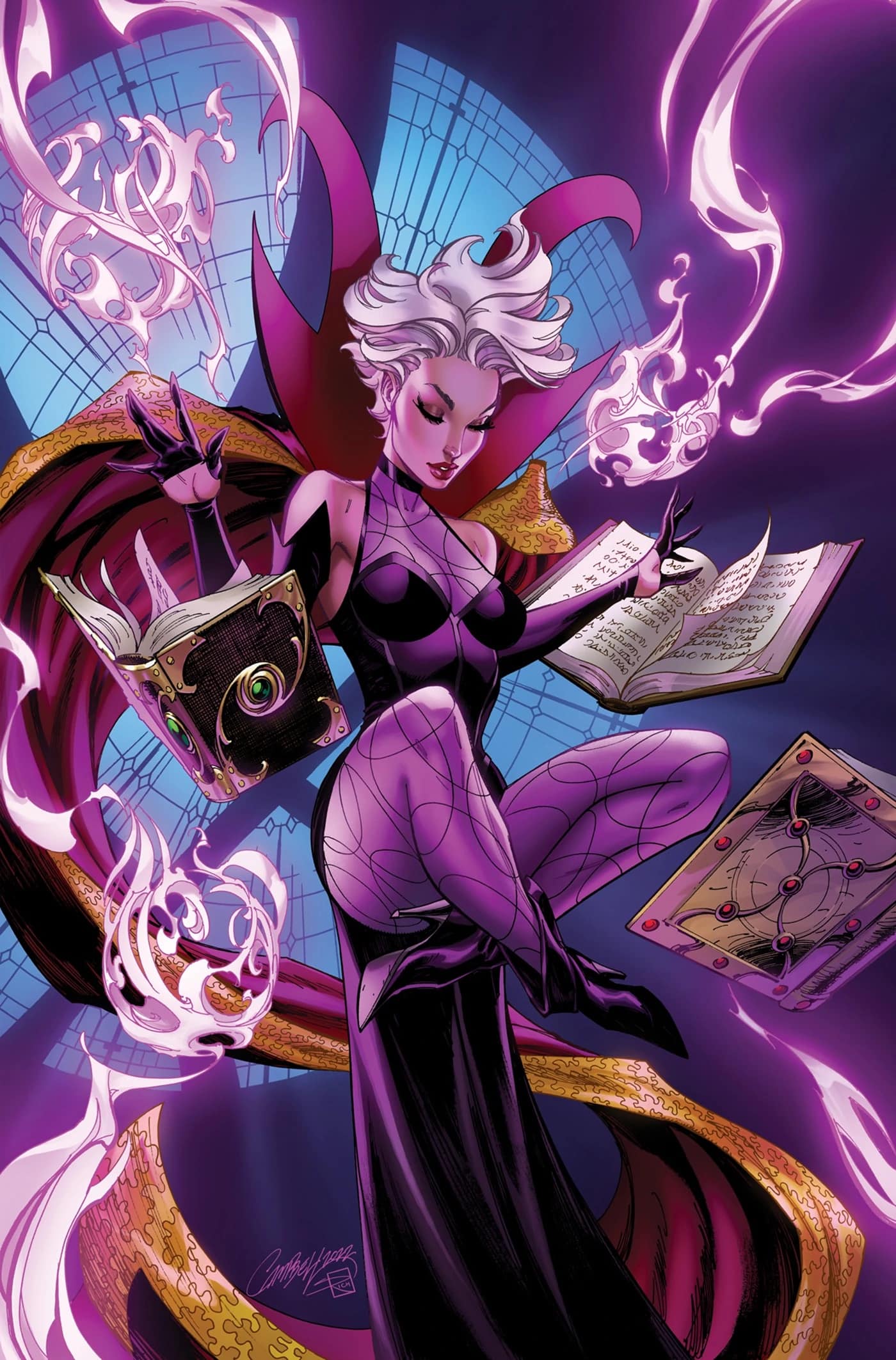 Mid-credit scene: Strange is visited by Clea played by Charlize Theron. She tells him there has been an incursion and she needs his help. She rips open the fabric of reality to take Strange to the Dark Dimension. For a full breakdown about Clea read: Doctor Strange Credit Scene Explained.

Post-credit scene: Bruce Campbell finally stops hitting himself (a spell Strange put on him earlier) and tells everyone “it's over.”