The finale of Moon Knight is now on Disney+ and what an ending to an amazing ride. Marc must make it back to the world to stop Harrow and Ammit. Layla gets some help from a goddess and a post credit scene reveals someone who has been around for awhile. Let's get into “Gods and Monsters” with this Moon Knight episode 6 easter eggs and breakdown.

This is your spoiler warning if you haven't watched episode 6 of Moon Knight. 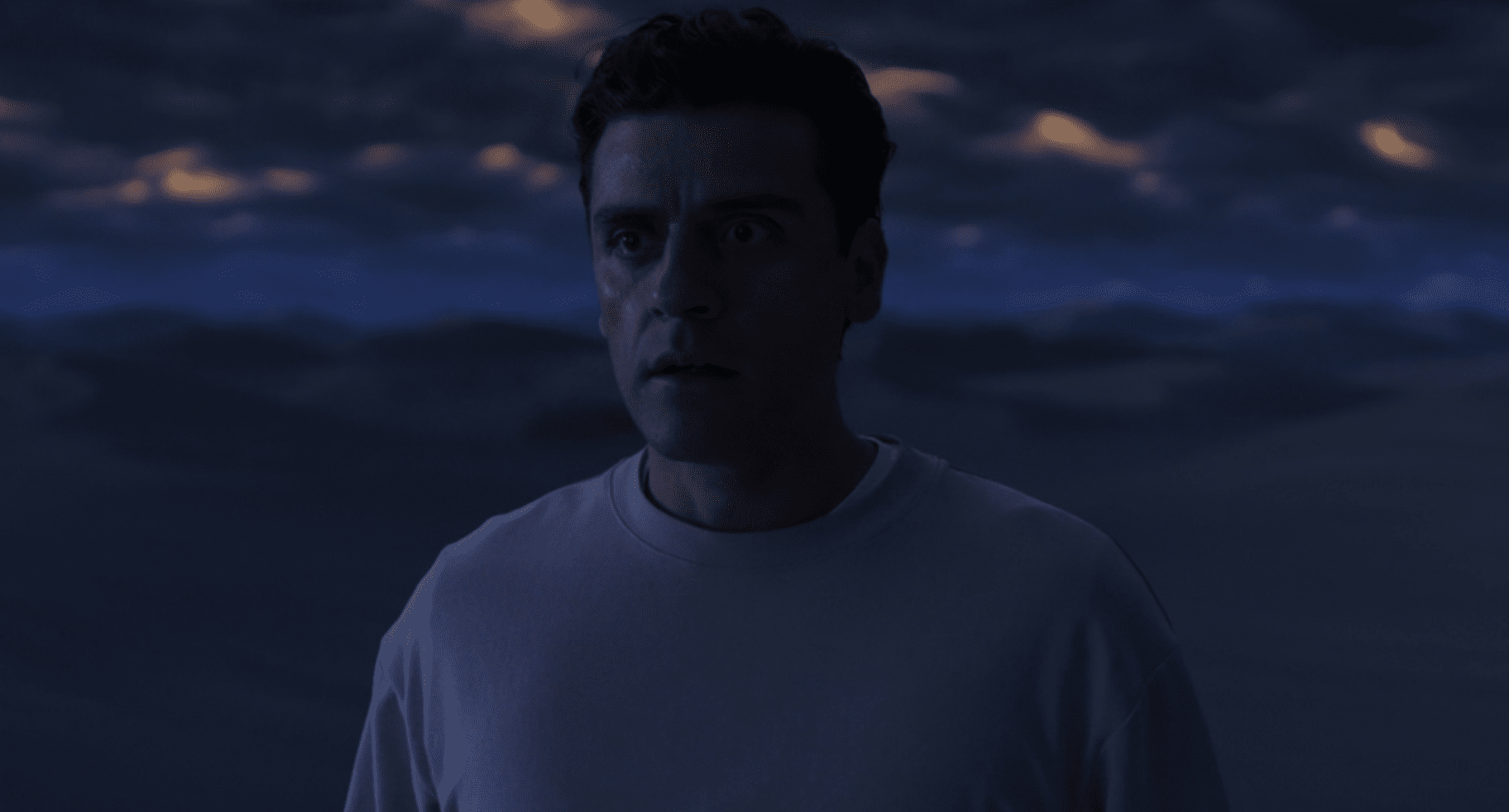 Marc is seen floating in the water after being shot during episode 4. Harrow's henchmen, Billy and Bobbi, pull Marc's boy from the water. They find Ammit's statue in his jacket.

Harrow apologizes to Marc Spector, Steven Grant, and whoever else might be inside of him. He places the scarab onto his body, his cane transforms and he and his followers leave the tomb.

Layla takes the scarab and it once again points the way to Ammit's ushabti. Using it she decides to go after Harrow on her own, something Marc predicted in Episode 5.

At a military stop, Harrow gets out of the car and uses the upgraded staff to drain the souls of the soldiers. Layla has stowed away with his people and as she goes in for the kill, the Goddess Taweret speaks to her through the dead body of a soldier. She warns Layla that Harrow is too powerful. 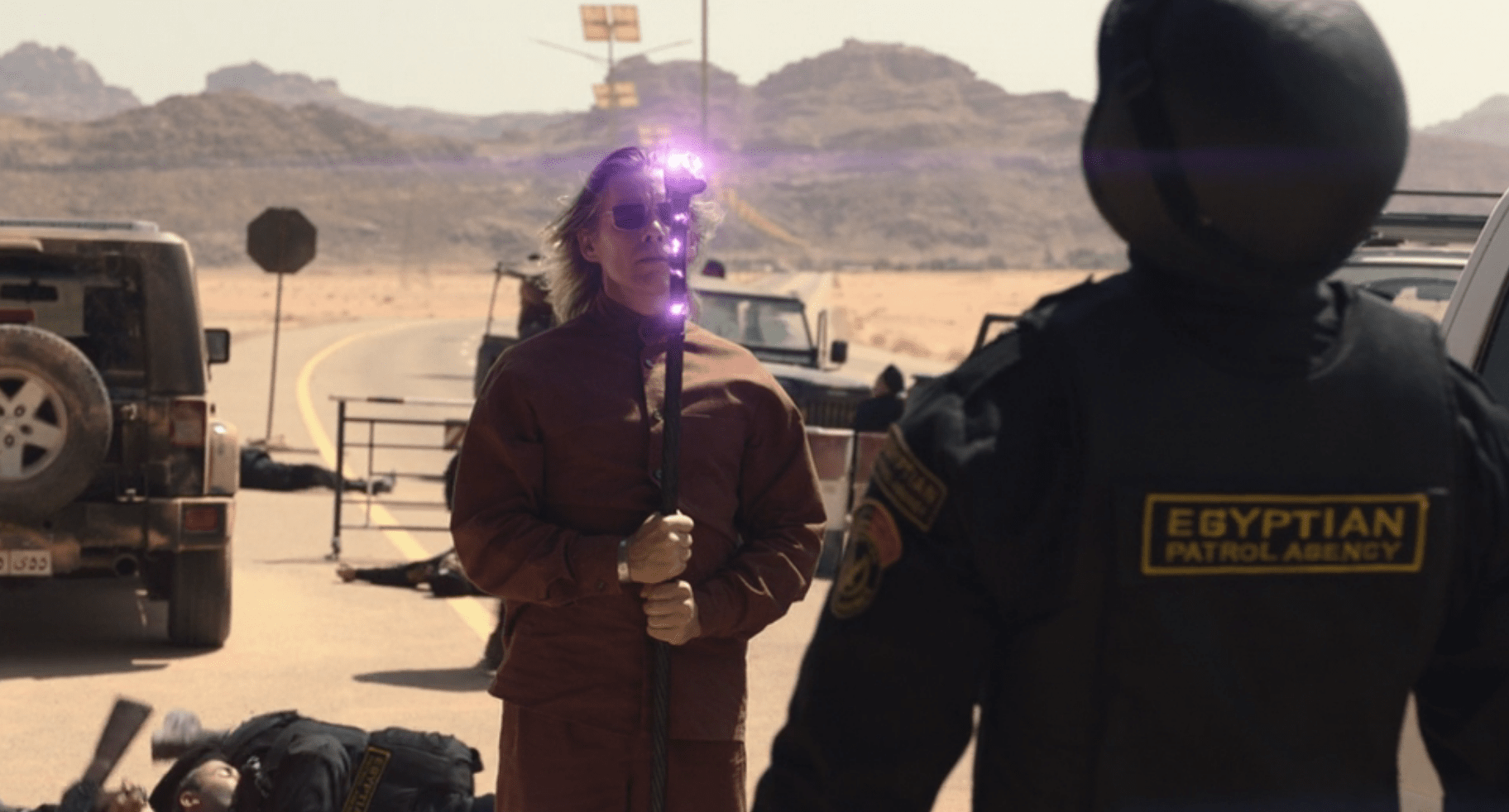 Taweret tells Layla to break Khonshu's ushabti located inside the Chamber of the Gods. She also says Layla could be her avatar. Layla refuses, thinking she will be able to stop Harrow on her own.

Harrow breaks into the great pyramid and the gods of the Ennead realize that Harrow is attempting to release Ammit. Harrow quickly kills the god's avatars and frees Ammit. 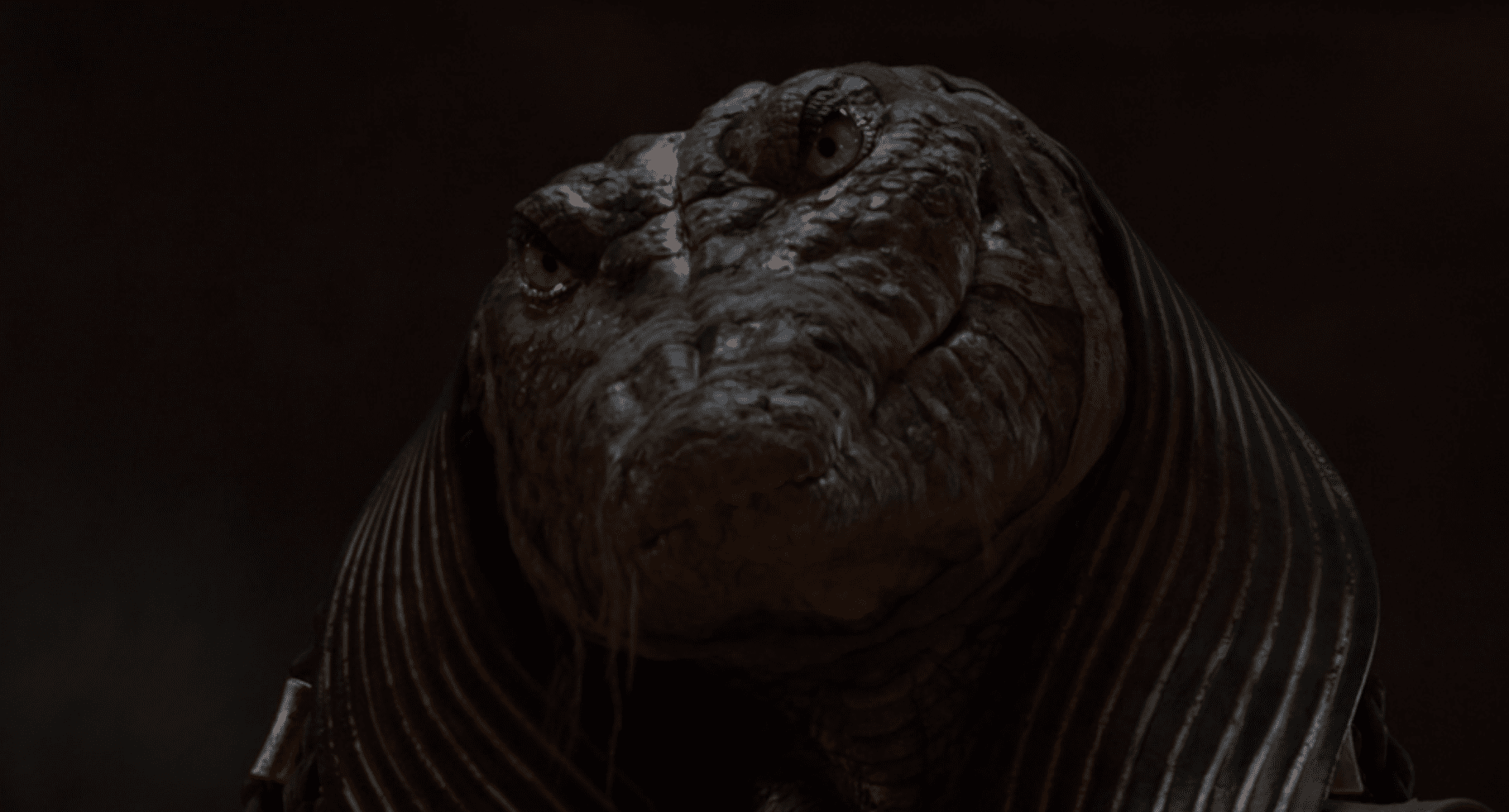 Ammit tells Harrow his scales are not balanced, but that his death is delayed in order for him to serve her.

Layla finds the statues of the gods and she frees Khonshu. He wants her to become his avatar in order to stop Ammit but she refuses. He claims only with an Avatar can he stop Ammit, but again Layla tells him no. Khonshu faces Ammit and tells her he cannot allow her to proceed with purifying the souls of this world.

In the Field of Reeds, Taweret tells Marc his heart is now full and he has manifested what he always wanted, peace. Marc refuses to leave Steven behind and leaves the Field of Reeds to find him. Taweret warns Marc if he leaves he can never come back.

Marc finds Steven near Osiris' gate. He apologizes to him and tells him he is the only real superpower Marc has ever had. Marc slowly turns to a statue, reaching for Steven. His heart appears between their hands and begins to glow. The gates open and Marc and Steven are brought back to life.

Khonshu and Ammit begin to fight. Marc and Steven walk through the gates thanks to Taweret's help. When Khonshu senses Marc has returned, he goes to him in the desert. Marc is healed and is wearing the Moon Knight armor.

As Khonshu tells Marc what has happened, Steven appears as Mr. Knight. Khonshu is annoyed but Steven reminds him they just saved his life and there needs to be a new arrangement between them. Khonshu agrees to free them both when this is all over. Steven accepts.

Gods really hate bargaining don't they? Reminds me of Doctor Strange and Dormammu only less bloody and Khonshu gave in a lot quicker. Which of course should make you suspicious.

Layla finds Osiris' avatar still alive. He tells her they must imprison Ammit in a mortal body to make her vulnerable. But they do not have enough avatars left to do it. Layla agrees to be Taweret's temporary avatar in order to fight Ammit.

Taweret tells Layla her father was taken to the Field of Reeds. He was found worthy.

Marc flies to the pyramid to face Arthur, no Mooncopter needed. From the top of the pyramid Arthur chants and the followers of Ammit begin to judge everyone around them.

Ammit devours these souls and grows larger with each one.

Inside the pyramid, Layla appears in her ceremonial armor designed by Taweret, complete with scarab wings.

This is a nod to the Scarlet Scarab. In the comics, Abdul Faoul stole the ruby scarab from the Human Torch and Namor, eventually passing it down to his son. The Scarlet Scarab had superhuman strength and durability, flight, could fire mystical energy, and would allow him to take power from others.

Khonshu battles Ammit in a kaiju style fight while Marc and Steven take Harrow off the pyramid and drop him in Cairo. These two are learning to work together and play to their strengths.

While the larger than life gods battle happens, Marc, Steven, and Layla face Harrow. Steven has embraced Marc's fighting side and is now capable of holding his own. He fights using the truncheons seen in episode 2.

Marc is overtaken by Harrow and looks over to see Layla pinned down by gunfire. He blacks out and awakens, having killed everyone around them and almost killing Harrow. Jake Lockley has clearly come to play.

Layla and Marc take Harrow's body inside the pyramid to bind Ammit to him. The ritual works but she vows never to stop as long as she lives.

Marc refuses to kill Harrow and tells Khonshu to release them. He does and Steven is back in Putnan Medical Facility talking to Dr. Harrow. He tells Steven he doesn't believe Ammit or Khonshu are real. Marc challenges that and Harrow claims their work must continue. As he walks away there is blood in his sandals from the broken glass, leaving tracks on the white floor.

Laters gators. Marc and Steven tell Harrow they would rather go save the world. Marc wakes up in Steven's bed in the same clothes with the same music playing from the beginning of episode 1. Everything has come full circle. Two goldfish are swimming in the tank.

Marc makes a comment about the mess before falling to the ground. He is still tied to the bed with the same ankle restraints as before.

Arthur is inside a mental hospital and is taken out to a limo by a man speaking Spanish and wearing driving gloves.

On the wall is a QR code for a Free Moon Knight comic. The comic is 2019 Moon Knight #1 Acts of Evil where Moon Knight must stop Kang the Conqueror before he takes out Khonshu. This could be a hint that we will see more of Marc Spector in the immediate MCU future. 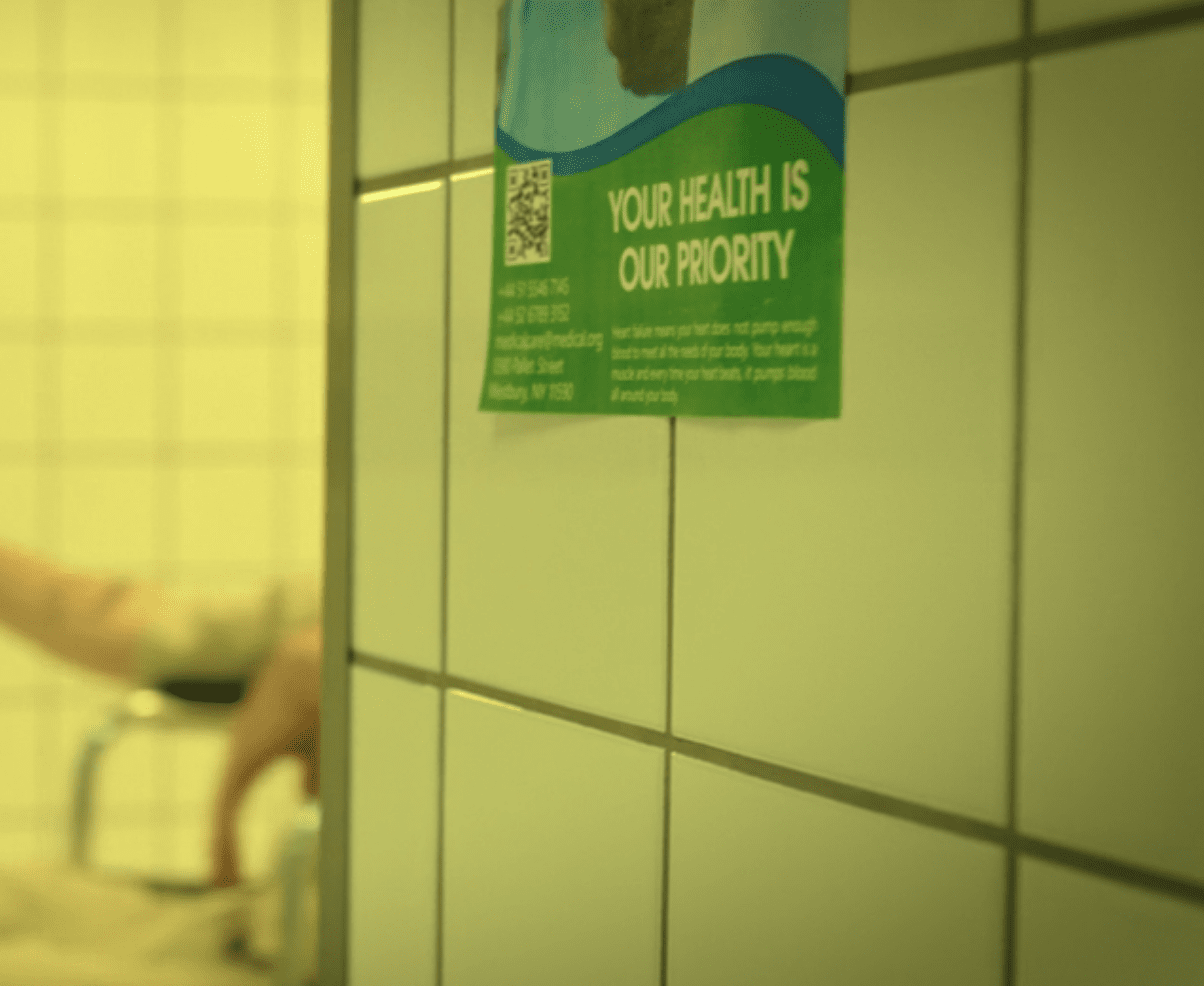 As he is being wheeled outside, Arthur sees dead bodies on the floor. He is inside the same mental hospital that was recommended to Steven in episode 2: Sienkiewicz Psychiatric Hospital.

The man throws Arthur into a white limo with blood red seats.Khonshu is sitting in the car and introduces Harrow to his avatar, Jake Lockley.

Speaking Spanish, Jake tells him “Today is your turn to lose” before he kills Arthur.

The limo drives away, SPKTR on the license plate.

All episodes of Moon Knight are now streaming on Disney+.