Arabian nights, like Arabian daysssss more often than not have Easter Eggs in a lot of good ways. No? Okay, well I'm no Alan Menken, but I am an expert Easter Egg spotter and all around Disney expert. Especially if we are talking Renaissance Disney. Aladdin has flown on his magic carpet into theaters everywhere and along with him a lot of fun hidden gems and callbacks. 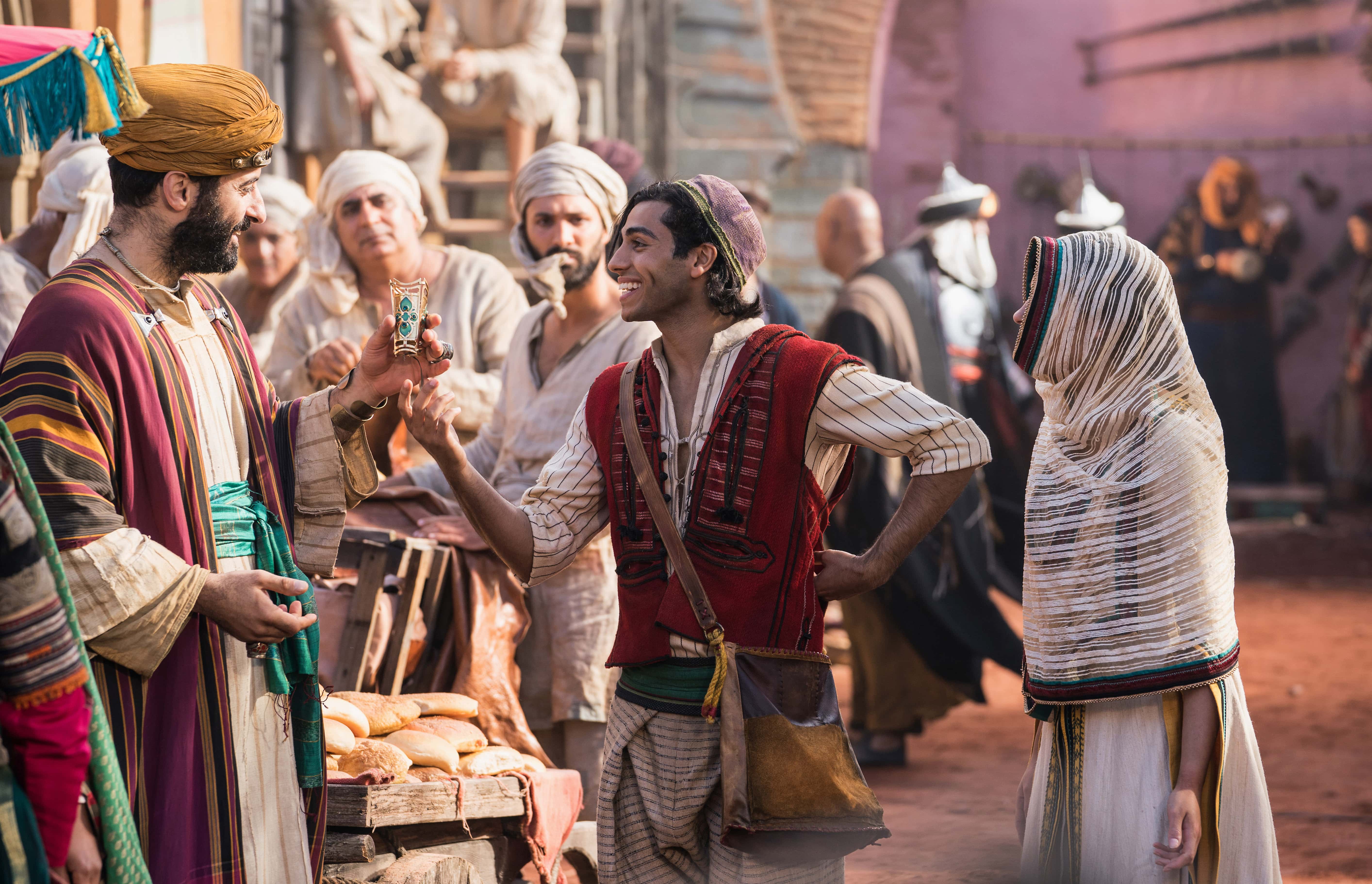 This is your spoiler warning, if you haven’t seen Aladdin yet, stop now, bookmark this Aladdin Easter Eggs post, and come back after you've seen it!

Related: Is Aladdin Safe For Kids? 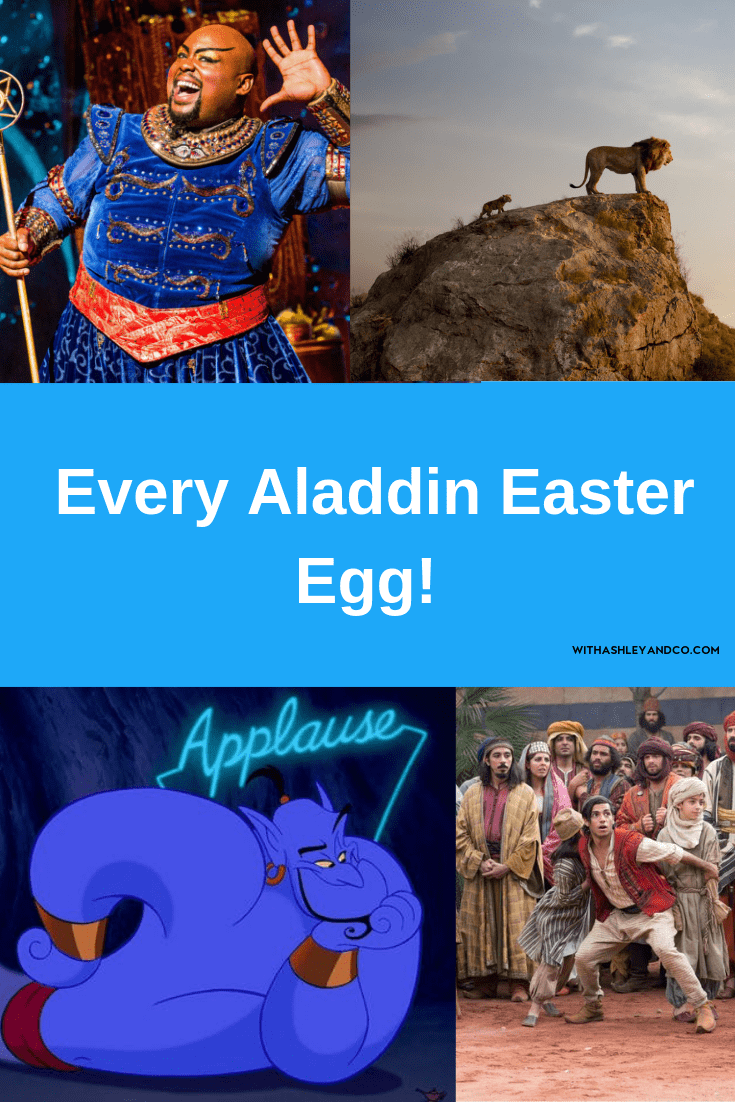 The Cave Of Wonders is voiced by Frank Weller. Frank Weller also voiced them in the original animated film.

One of Jafar's picks to go into the Cave of Wonders is swallowed whole. 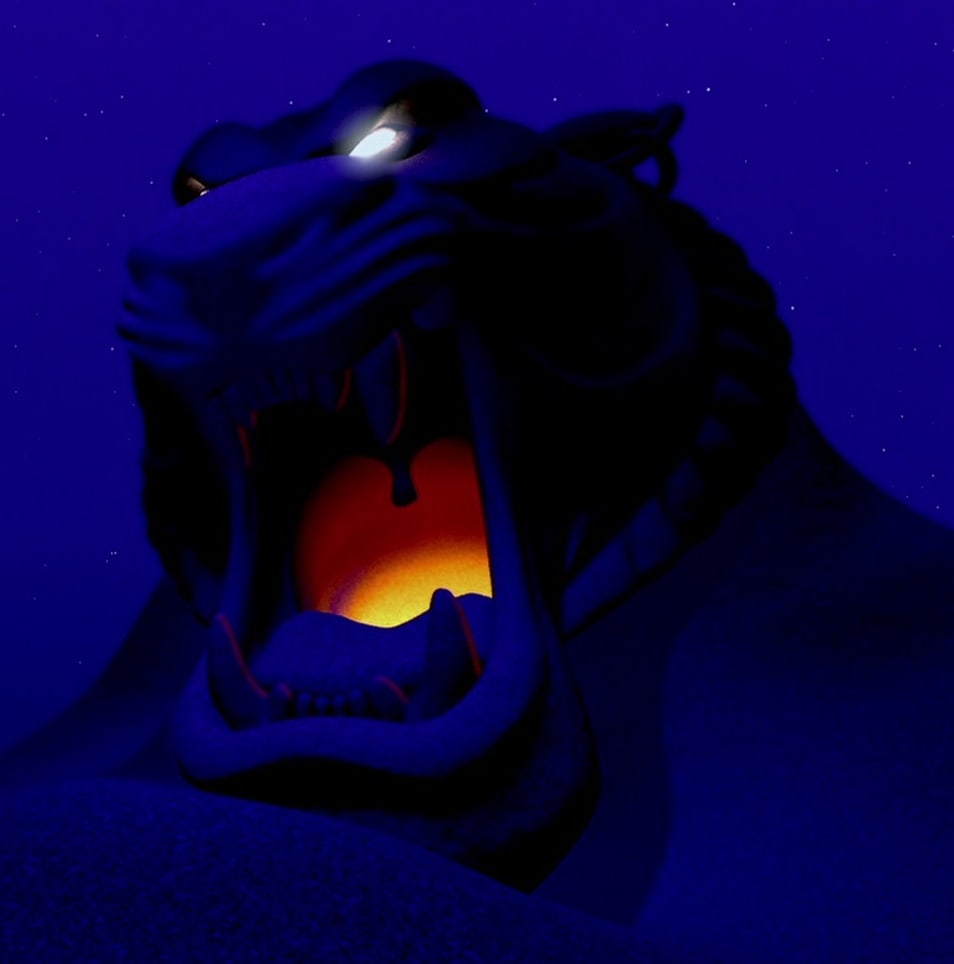 Aladdin is called a Street Rat.

After stealing it, Aladdin gives his food to some children while Abu remains selfish.

Jafar pushes someone down a well.

Do you trust me?

When Prince Anders comes to visit Jasmine, Aladdin saves the children from getting hurt. The guards tell him only his fleas will mourn him. 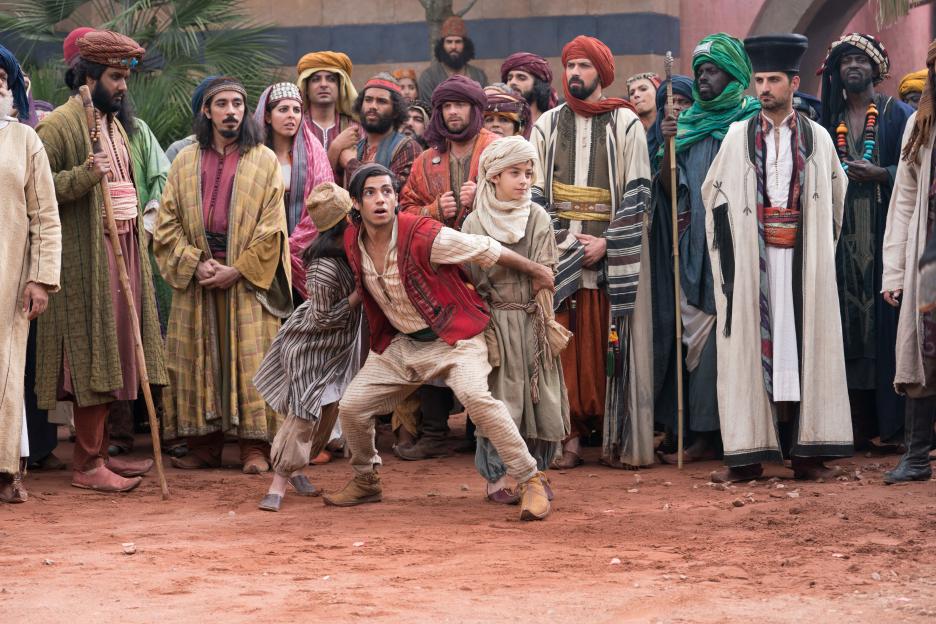 A Whole New World music is heard playing when Aladdin stares at Jasmine.

Abu goes after the red jewel signaling the Cave of Wonders to attack.

Abu is given symbols and a drum, resembling the toy Jafar turns him into at the end of the original Aladdin. 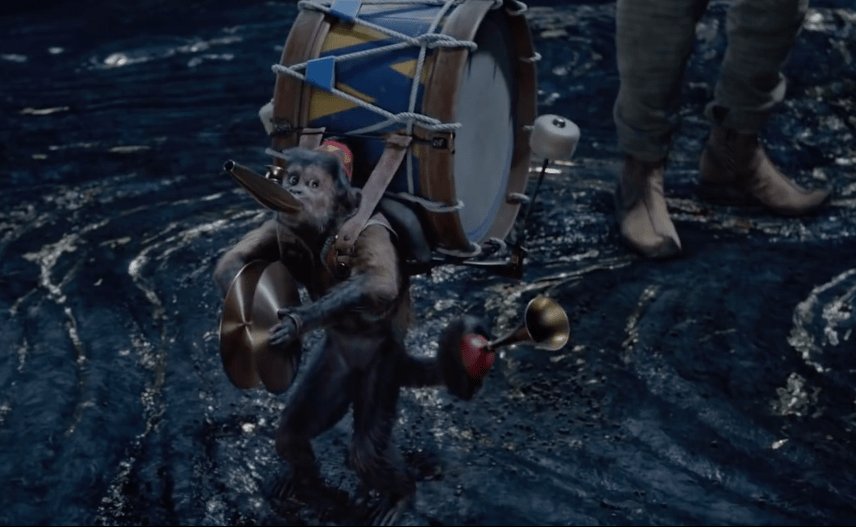 Magic Carpet does The Carlton, made famous in The Fresh Prince Of Bel Air.

The images on the scroll of Genie, Sultan, and Aladdin, resemble their animated counterparts. I like to think of this as their homage to Robin Williams. 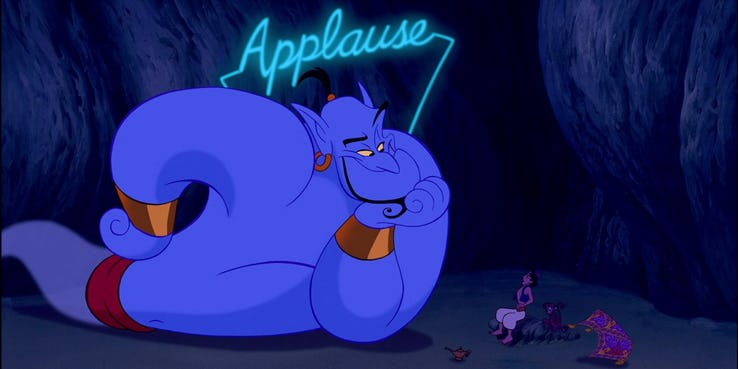 The prince that appears in the distance is wearing colors like Will does in the The Fresh Prince Of Bel Air.

Carpet is busy building the Disney Castle Logo in the sand. He even throws sand over it mimicking TinkerBell flying over the castle.

During Prince Ali, Genie is shown dressed as a woman.

Lyric change from Sunday Salaam to Friday Salaam. This is to reflect that the holy day for Muslims is Friday not Sunday.

Genie's servant outfit is a nod to the Broadway Aladdin Genie. 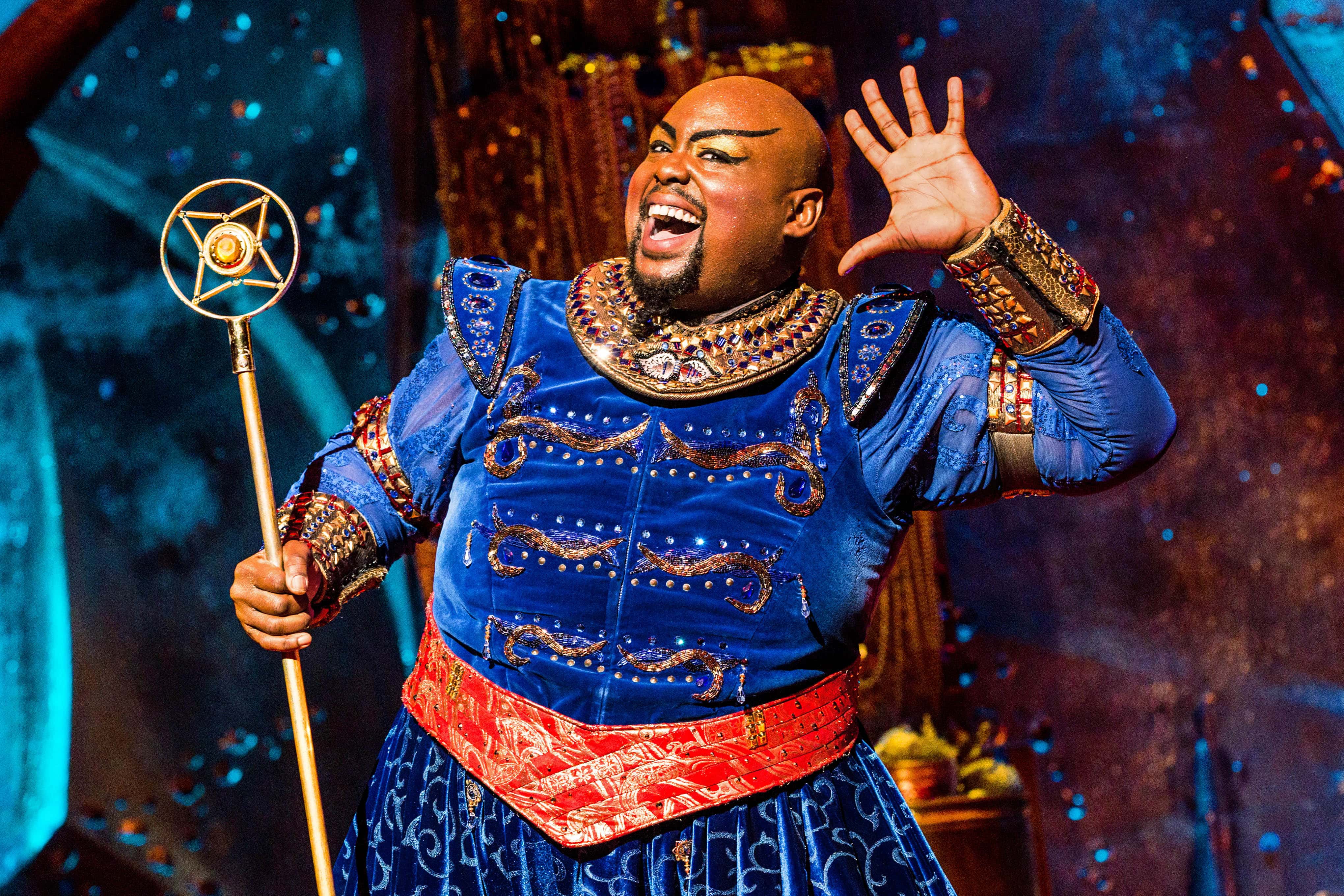 The Sultan and Jasmine are wearing their iconic looks from the animated film.

The words Be yourself appear on the map.Maybe one of these days Aladdin will learn this lesson.

The Genie is awkward with the woman he likes just like Will Smith's character in Hitch. 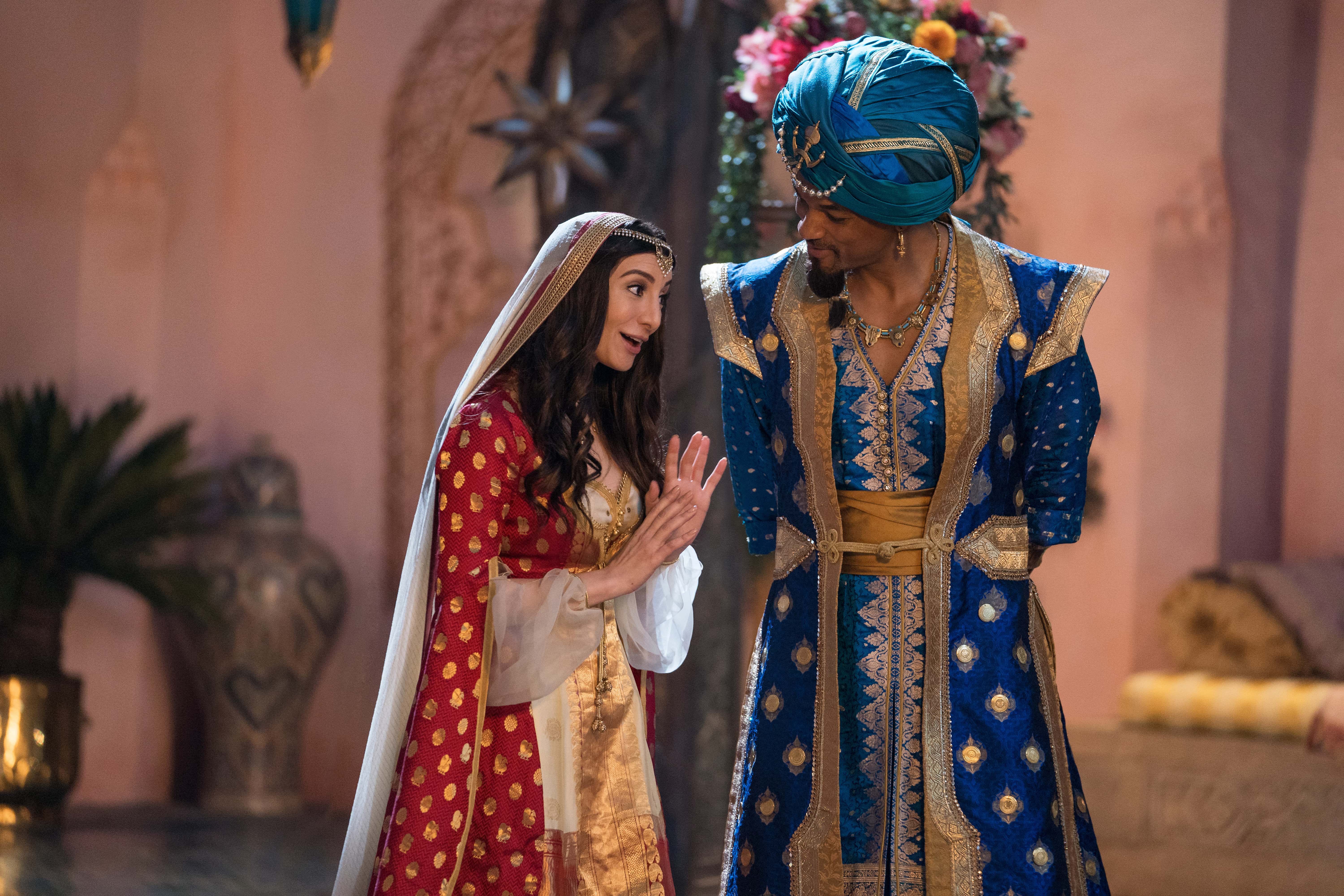 Jasmine sees through the Prince Ali disguise when he says Do You Trust Me? She also uses a statement about Abu to get Aladdin to fess up. 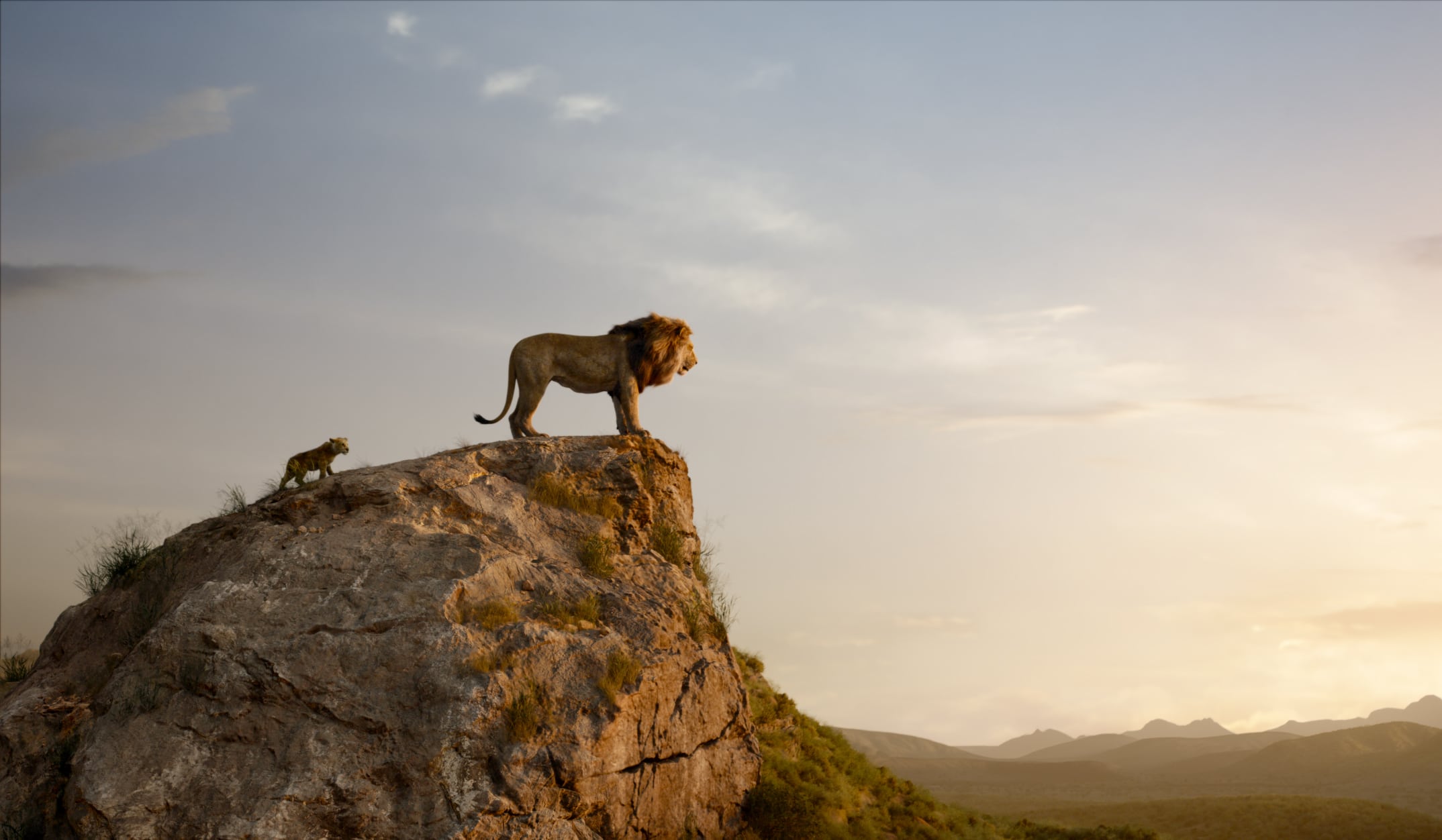 Hidden Mickey found in the fruit bowl during the scene Aladdin says he is not going to use his third wish to free the Genie.

Iago is transformed into a giant parrot. Seen flying over Agrabah like Drogon over Kings Landing.

While nothing happens to Abu, Carpet is torn up during the final battle. Luckily Genie puts him back together.

The Sultan, once stripped of his powers, is wearing a Kufi. A Kufi is traditionally worn as a prayer hat, or head covering to acknowledge that God is above.

Jafar is sent to cool out in the Cave Of Wonders.

Genie resembles Hercules while calling the name Jasmine in Rocky fashion. Yo Adrian! In the original animated film, during A Whole New World, they are seen flying through Mount Olympus/ Ancient Greece.

Alan Menken who wrote the original songs for Aladdin, returned to score this film as well as write the new song Speechless. You can always spot a Menken song am I right?

Aladdin is in theaters now! 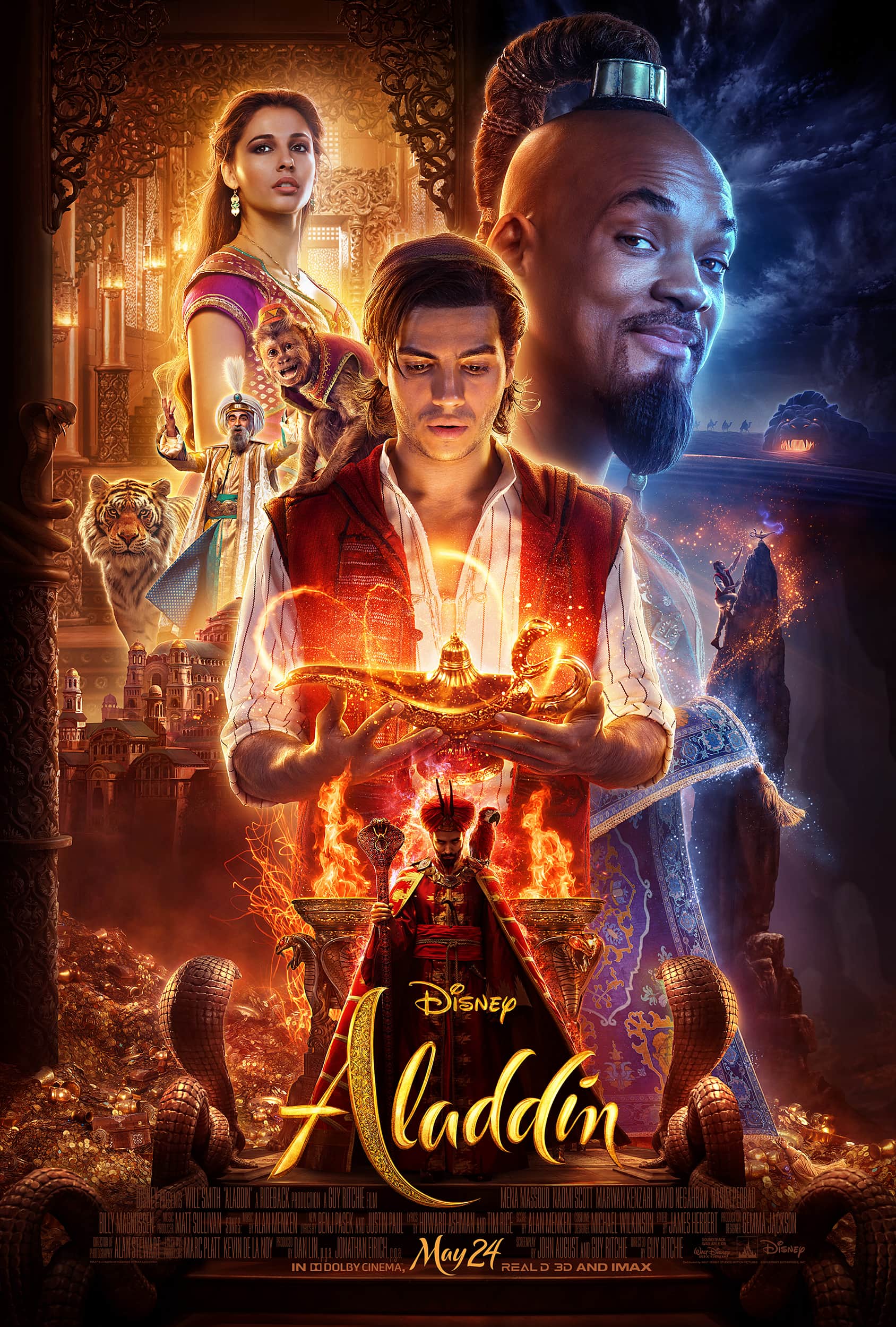