Spoilers ahead if you have not watched The Book of Boba Fett episode 5.

This week's episode opens with The Mandalorian, Din Djarin, inside a slaughterhouse. He is there looking for Kaba Baiz, a Klatooinian, who has a bounty on his head.

Mando is still carrying the Beskar Spear and the Darksaber.

He brings the head of the bounty to the alien who hired him and asks for information regarding access to the substrata. Once there he follows signs and finds The Armorer of The Mandalorian. She and Paz Vizsla  escaped the fight on Nevarro. Vizsla mentions a third Mandalorian also survived.

The Armorer reveals that the Darksaber was forged over 1,00 years ago by Tarre Vizsla, the first Mandalorian in the Jedi order.

She offers Din a home with them as they rebuild. He tells Paz how he got the saber, by defeating Moff Gideon.

The Armorer tells Mando that the Beskar Spear is a danger to all Mandalorians as it not only blocks lightsabers but also can pierce Beskar. He gives it to her to use to make armor with.

He is then told due to the fact that Bo-Katan was gifted the Darksaber instead of winning it in battle that is why Mandalore lay in ruin. In Star Wars Rebels, Sabine is the one who gave Bo-Katan the Darksaber. Sabine won the right to wield it after defeating Imperial Viceroy Gar Saxon in a duel.

The only reason they survived the Great Purge is because their sect, The Death Watch, was stationed on the moon Concordia.

A flashback shows The Night of a Thousand Tears, when almost all the troops on Mandalore were destroyed. This scene also features KX-Series Imperial Security Droids, Tie Bombers, and Probe Droids.

Din asks the Armorer to forge something for Grogu, he wants Baby Yoda to be safe. When she ties the scarf around the newly made armor it is in the shape of Grogu's head.

The Armorer is attempting to teach Din how to wield the Darksaber. He must stop fighting against it. Paz Vizsla challenges him to a duel for the Darksaber. They battle without their jetpacks on a walkway above the stars. Star Wars loves putting people on narrow walkways. 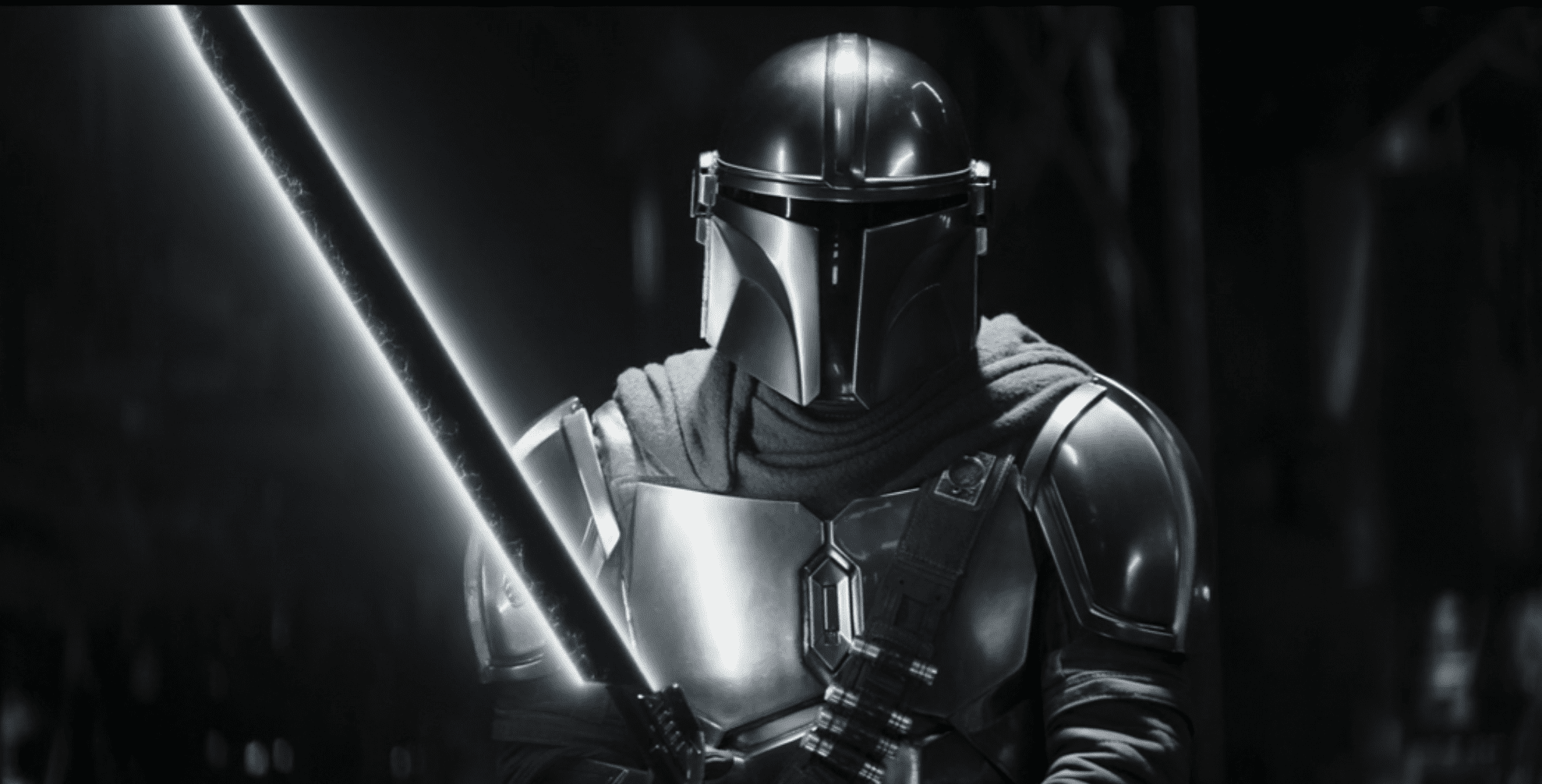 He wins the duel but reveals he has taken his helmet off. The Armorer says he is no longer a Mandalorian and can only atone in the Living Waters of Mandalore. He leaves with the Darksaber.

After a glimpse last week, Peli Motto is back. One of her droids, BD, is being attacked by a Womp Rat who also ends up attacking her. Mando saves her.

BD is the same droin Cal Kestis had as a companion in Jedi Fallen Order.

She tells him she has a replacement for the Razor Crest. It's an N-1 Starfighter, a ship of the Royal Guard of Naboo. 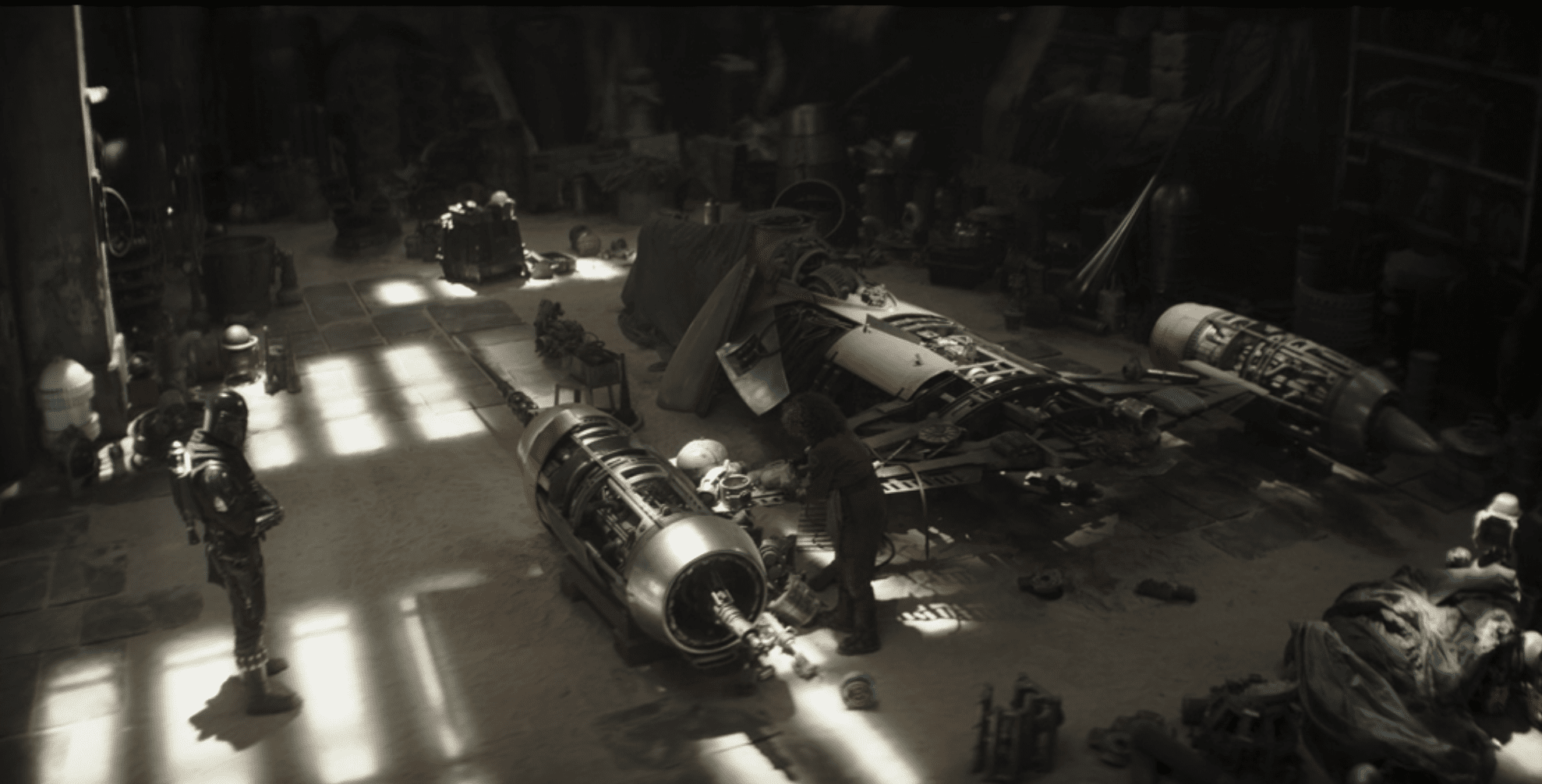 With the help of her Pit Droids, including R5 and the Jawas stealing from the Pykes, Mando and Peli get the N-1 put together and looking sharp.

The part Mando asks the Jawas to find is a cryogenic density combustion booster. Which happens to be the same part that Han Solo used to try and hold back the walls of the trash compactor in A New Hope.

He takes for it a run through Beggar's Canyon and up into the space above Tatooine.

Dank Farrik. He hailed by two X-Wings. One of the Pilots is Captain Carson Teva, someone familiar with Mando. He easily escapes the pilots and heads back to Peli.

The other X-Wing pilot is Lt. Reed played by Max Lloyd-Jones who was Luke Skywalker (Mark Hamill's body double) in The Mandalorian Season 2 Finale.

Fennec Shand is waiting to hire him to help Boba Fett. Mando agrees to help and refuses pay. But before he helps Boba he needs to visit a little friend- Grogu!

Episodes 1-5 of The Book of Boba Fett are now streaming on Disney+.