We first met The Bad Batch in the final season of The Clone Wars. Now, Hunter, Wrecker, Tech, Echo, and Crosshair are going to be starring in their own show on Disney+. What better way to get to know Clone Force 99 than by talking with Dee Bradley Baker, Jennifer Corbett, and Brad Rau for this Bad Batch interview.

*Minor spoilers for the premiere are below. 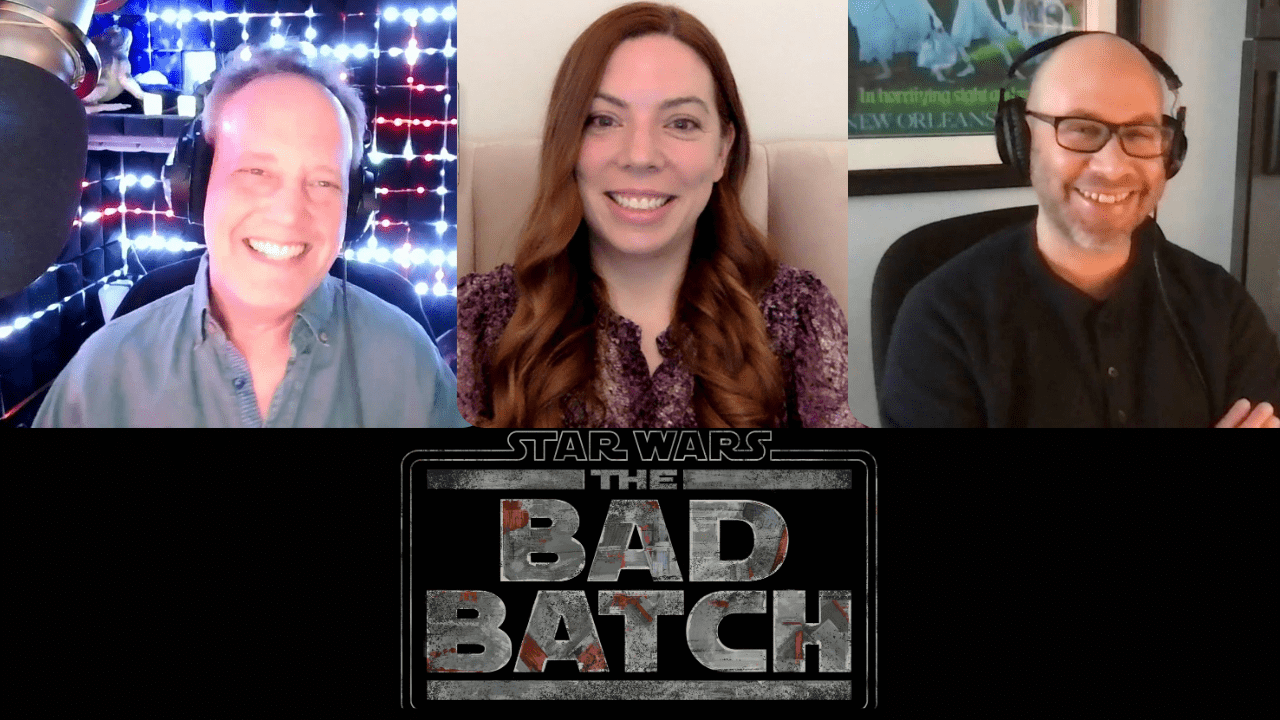 If anyone knows The Bad Batch well it is the man who brings these deviant clones to life. Dee Bradley Baker has been the voice of every clone in The Clone Wars, Star War Rebels, and now The Bad Batch. He shared about the members of Clone Force 99 and even let us in on a little secret…who is favorite is.

Baker: Hunter is the leader of the pack.H e's got tracking skills, heightened senses that help him gauge the terrain. Tech is very technically oriented. He always has like a handheld device that he's working on. Tech is super cool, super calm, and competent with all things technical.

Then you got Wrecker.  Who no surprise (laughs) is the muscles of the group. He's got incredible strength. Crosshair is the sharpshooter of the group who is kind of a contrary character and quite interesting in the dynamic. And then there is Echo, who is a modified clone. He is an android clone from The Clone Wars episodes, who was brought on board with the Batch. Together they are a force to be reckoned with.

But about that favorite Clone…

Baker: It's fun to be Wrecker, because he's so honest and funny.  But I have great affection for all of them.  They're all very interesting fellows. Wrecker, though he is probably the furthest away from me and he's great fun.

RELATED: Star Wars The Bad Batch: Everything We Know So Far

Dave Filoni is serving as an executive producer on this project and Jennifer Corbett (producer and head writer) and Brad Rau (producer) have both worked with him in the past on Star Wars projects. What was it like collaborating on The Bad Batch?

Corbett: Getting the chance to develop the series with him is kinda like a master class in writing Star Wars. With this being a sequel series of sorts to The Clone Wars, it was kind of crucial that he be involved in this process. Because these are characters that he's created and it’s the world that he knows. It's so exciting to see this show grow and develop with this team. And he's been fantastic to learn from.

Rau: I've known Dave for a long time.When he was starting Clone Wars, I happened to just be starting my own animation studio at that time.  So I was unable to join the team of the Clone Wars. It was one of my regrets that I rectified later on in Rebels, joining  as an episodic director. He’s an awesome guy, a good friend. I couldn't think of a better mentor, especially for Star Wars. The stuff he tells us every day is fantastic and amazing. Just collaborating with him and being able to work with you, Jen, so closely on this show's been awesome. It's been a dream come true.

So far in the Star Wars universe we have seen the clones in all their glory during The Clone Wars and we have seen the new generation of Storm Troopers in Star Wars Rebels and beyond. The Bad Batch is kind of in the middle of this as the galaxy goes through a big change.

Corbett: We've seen the Clone Wars where it's the height of the Clone Troopers doing what they're meant to do, and what they were created for. And the question became, “What happens after the war is over? What happens to clones who all they know is being soldiers? Especially for the Bad Batch who do things differently. How will they fit in once it becomes the Empire?”

We will see how they (The Bad Batch) react to this new environment and the new way of doing things and new way of following rules. Which again, isn't their favorite thing to do. It was interesting to just sort of talk about the transition from the Republic to the Empire and what that looks like, because it's not what we saw in the original trilogy.

Baker: The Bad Batch are not so much a rule-based unit. (Laughs)

In the series, fans are introduced to a new clone, Omega. She is the only female clone that we know of in the Star Wars universe. Her and Hunter's dynamic seems similar to Mando and Grogu, the reluctant armored father figure to the mischievous child. What can you share about Omega?

Baker: At first of course the team is their own sealed unit. They're certainly not used to having anybody else along or working with anybody else.  It's interesting for them to have this kind of personal relationship with the younger character and to see how that changes.  Omega has her own interesting potential. Powers maybe? I think it connects you to the story in a personal way. So it's not just an action story.

Omega seems like she is going to be integral to the story of The Bad Batch.

Rau: She is. Definitely. She's so great. This time period, as a fan, I'm just so excited to see, 'cause we haven't seen that much about the rise of the Empire. So, to have these clinical, best of the best soldiers as suddenly fish out of water in this changing galaxy, and to have this kid that they help raise it's interesting. Honestly none of them are really equipped to go out into the world. How do they eat? They don't have a mess hall to go to. How do they get their gear fixed? How do they get fuel for their-for their ship?

Generally, clones don't have a lot of personality but that is not the case for The Bad Batch. What was the process like finding these guys' characters and bringing them to life?

Baker: The Clones, the tricky part for them, is that the differentiation is much tighter between characters. It has to be decisive. It has to be clear.

The Bad Batch are much further apart from each other, which oddly makes it a little bit easier to jump from character to character to character. For me it feels like I'm jumping from rock to rock on a stream. I can see the rock. The writing is clear. I can see them.  I feel like I know them, and it actually (laughs) it actually helps that they're further differentiated vocally and in terms of their personality and moods.

It's a really fascinating process as a voice actor to have these scenes where I'm just-I'm just talking to myself.

Corbett: It's impressive to watch him do it. When we first started, I thought he was gonna go one character at a time. He just acts out a scene with himself, with all of these Clones. But there's no pause. He just goes right into it. And I was blown away. And each time we do one of these record sessions, I'm just amazed at Dee's talent.

Jennifer, you spent time in the United States Navy. Being from a military background did that help you relate to these guys better?

Corbett: I understand how people in the military become like brothers and sisters. That's what I try to bring to it, how this squad, even though they are these elite soldiers, they are a family. Like the military, no one comes from the same background, everybody has their different reasons for doing what they're doing, but it's a family dynamic.

Without giving too much away, it feels like each member may be on a journey this season of The Bad Batch. Crosshair's however seems like it is going to take him away from the Batch. 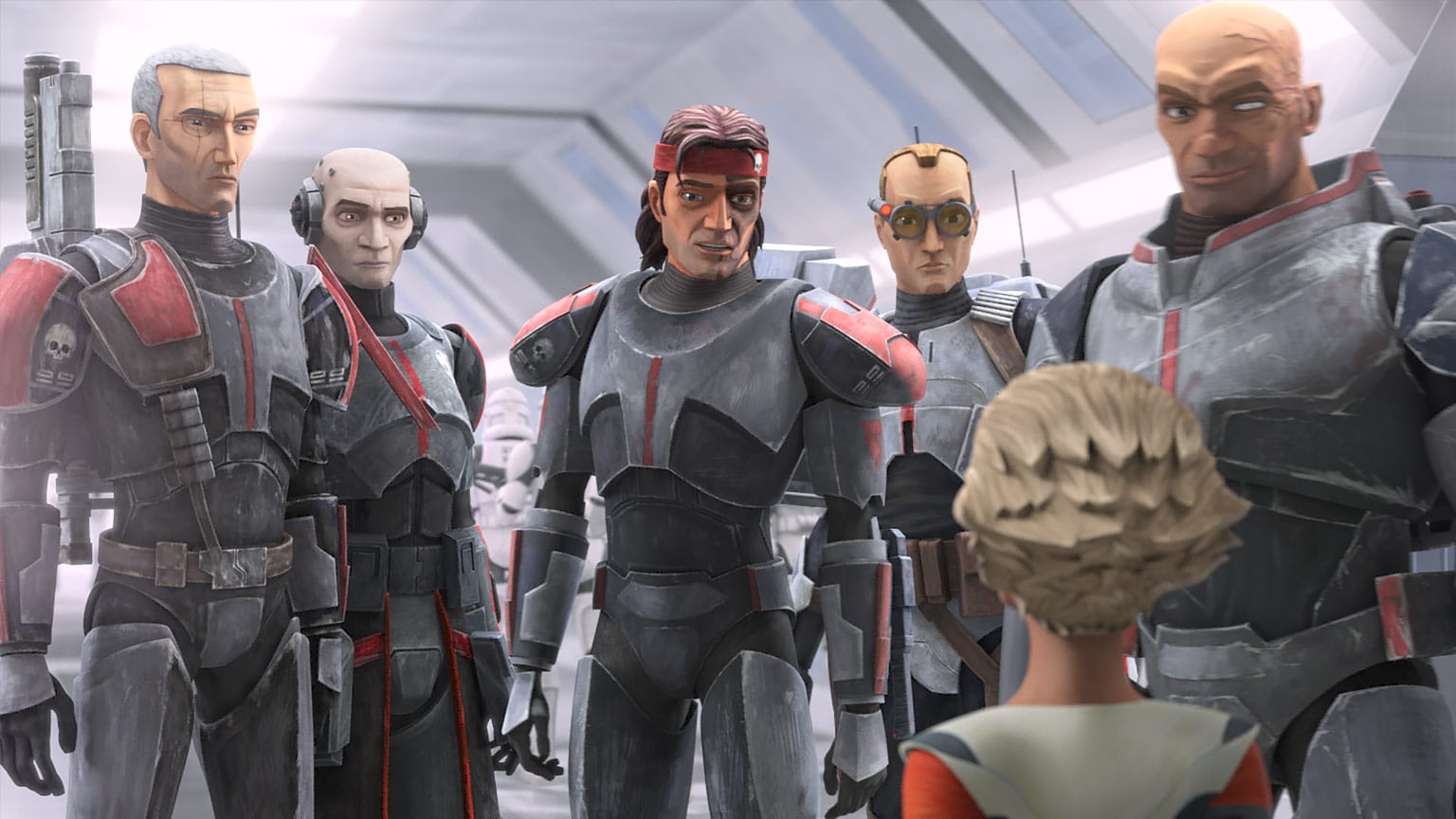 Baker: Crosshair is a really interesting lynchpin member of the team. A sniper is someone that stands further back from the rest of the group, and just takes 'em out, one by one. And that's very much to his character.H e's not someone who’s running around with the team, he's assisting the team, in a very strategic and laser focused kind of way. His nature is to be set apart from the team.

That very definitely plays out as the story plays out.  There is this mega transformation from Republic to Empire which is a very profound moment in the entire story of Star Wars. That's part of what's so interesting is that you have the personal dynamics of these few characters and this whole larger process that is playing out among their dynamic as well. There's quite a lot there to unpack.

You can start to unpack Clone Force 99's story this month. Star Wars: The Bad Batch premieres May 4 on Disney+ with a special 70-minute episode, followed by new episodes every Friday starting on May 7.